The Green New Deal is the only U.S. policy initiative that promises policy reform on a scale that matches the scale of the climate emergency. However, for the Green New Deal to accomplish its climate goals, it must spur two large-scale transitions: the transition away from fossil fuel use toward renewable energy, and the transition away from industrial agriculture, a huge polluter and greenhouse gas emitter in its own right, toward organic regenerative practices that draw down and sequester carbon.

The latter transition would have the added benefit of reducing emissions associated with industrial agriculture, which among other things, include the enormous nitrous oxide and methane emissions from factory farms and synthetic fertilizer production and use. 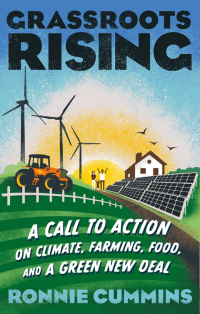 The potential for regenerative agriculture to reverse global warming is huge—but only if these practices are adopted, rapidly, on a large scale. We can’t address global warming, one small farm or hobby farm at a time.

Currently, as estimated by the EPA (Inventory of U.S. Greenhouse Gas Emissions and Sinks 1990-2017), the Lower 48’s 1.9 billion acres are sequestering 714 million tons of CO2e (carbon dioxide equivalent, or 11 percent of U.S. gross GHG emissions). To reach our goal of net zero emissions by 2030 (assuming energy conservation and renewable energy can reduce gross emissions by 60 percent), these 1.9 billion acres, or rather a significant percentage of these acres, will have to be regenerated and reforested over the next decade so that they can sequester approximately three to four times as much atmospheric carbon as they are currently sequestering. Looking at scaling up existing best practices, we can see that this great sequestration and recarbonization of our soils and biota is indeed possible.

Let’s look at the practices (and the math) of potential carbon sequestration (and reduction of methane and nitrous oxide emissions) on the 1.9 billion acres of U.S. farmland, pastures, rangelands, forests, and other landscapes by 2030.

U.S. pasture and rangeland (654 million acres) covers more than one-third of the Lower 48. One-quarter (158 million acres) of this acreage is administered by the U.S. government and is usually open to livestock grazing by ranchers for a fee. Another 127 million acres that the EPA classifies as croplands are used by farmers to grow animal feed for livestock. This means that the livestock and livestock feed portions of our agricultural lands adds up to 781 million acres, 41 percent of all the land in the Lower 48.

The majority of these pastures and rangelands were once a diverse landscape—grasslands and natural prairie covered with native (deep-rooted) grasses, trees, bushes, and plants. This carbon-rich, climate-friendly landscape sequestered large amounts of atmospheric carbon, supported biodiversity and wildlife, and efficiently infiltrated rainfall and snowmelt into the topsoil and groundwater, springs, and aquifers. Before the advent of the plow and the repeating rifle and the ruthless occupation of Native lands, large herds of migratory buffalo, elk, deer, and other mammals grazed on the grasslands as they moved across the continent, while millions of “keystone species,” including beavers (wetlands builders), prairie dogs (soil excavators), and wolves (forcing grazing herds to band together and killing off sick and diseased animals), worked in natural harmony to keep the landscape regenerated and hydrated.

At the present time, most of these 781 million acres have been plowed under, deforested, and/or overgrazed, leaving them eroded, degraded, and lacking in terms of soil organic carbon, soil fertility, and biodiversity. America’s once healthy pasturelands and farmlands have become major greenhouse gas emitters, rather than soil carbon sinks or repositories. But with regenerative changes in grazing practices and livestock management, including switching cattle and herbivores away from chemical-intensive, fossil fuel–intensive GMO grains to a 100 percent grass-fed diet, and moving poultry and pork from confinement to free-range pasture, raised on a diet of organic and regeneratively produced grains, we can bring U.S. rangelands and pasturelands back to full life and vitality.

Cattle and other herbivores such as sheep, goats, and buffalo should be outdoors, grazing on pasture grass, while omnivores such as poultry and pigs should be moved out of confinement and raised outdoors in a free-range or agroforestry setting, getting some of their nutrition/food in their pastures or wooded paddocks, while getting most of their nutrition from grains and forage that have been grown in a regenerative manner (no-till, cover cropped, alley-cropped, biodiverse, chemical-free, agro-forestry). Cattle and other herbivores will thrive and produce healthier meat and dairy products once they return to a 100 percent grass diet, as will chickens and pigs raised in a natural free-range environment. And consumers, once they understand the nutritional, environmental, climate, and animal welfare superiority of grass-fed and pastured meat and dairy, will increasingly choose to buy these products, especially if current subsidies—direct and indirect—for factory farms and factory-farmed animal feeds are eliminated.

Of course, all of this will require major subsidies for farmers and ranchers (including guaranteed fair prices, supply management, and payments for soil conservation) as well as changes in consumer purchasing and consumption, including a drastic reduction in the purchasing and consumption of factory-farmed meat, dairy, and other grain-fed animal products (chicken, poultry, and factory-farmed fish).

To carry out this restoration on a large enough scale, we will have to put an end to wasting millions of acres of our valuable farmlands to grow grain for herbivores (cows, sheep, goats, and bison)—animals that should not be eating grains at all. We will also need to stop sacrificing 38 million acres of our valuable farmlands to the production of ethanol and biodiesel from corn and soybeans and instead convert these row-crop commodity farms back into diverse crop production and grazing. The process of producing ethanol and biodiesel from GMO corn and soybeans, contrary to industry claims, actually uses up more fossil fuels in its growing and production cycle than it saves by allowing us to burn ethanol or biodiesel in our cars.

Regenerative management of these pasturelands and rangelands will utilize soil-building techniques such as no-till farming, multispecies cover cropping, roller crimping (breaking the plant stalks and leaving them on the field rather than plowing or spraying pesticides when the cover crops mature), and grazing animals holistically and rotationally. Once restored and under regenerative management, these lands can sequester approximately 12 tons of CO2e per acre per year.

Guaranteed subsidies for soil conservation practices, a waiver of grazing fees on properly grazed federal lands, and fair prices (coupled with supply management) for farmers and ranchers for their meat, dairy, and grains are some of the key policies we will need to implement after the 2020 elections in order to promote regenerative, carbon-sequestering management of the majority of these 781 million acres of pasturelands, rangelands, and animal feed croplands. The federal farm and soil conservation policies that we will need to fund in order to achieve a carbon-neutral economy by 2030 include the following:

If holistic grazing and livestock/pasture management best practices were carried out on just a quarter of total pastureland, rangeland, and animal feed cropland in the United States, we would still be able to sequester 2.34 billion tons of CO2e—approximately 100 percent of the carbon sequestration we need (in combination with a transition to renewable energy) to reach net zero emissions by 2030.

Disregarding the 127 million acres of cropland used for livestock grains and fodder, which we have discussed in conjunction with pasture and rangeland above, the United States’ 265 million acres of additional cropland can potentially be regenerated in order to store more carbon and improve fertility, water quality, biodiversity, food safety, and food quality or nutrition.

Traditional organic crop farming (no chemicals, cover cropping, minimum or no tillage, use of natural fertilizers) can sequester CO2e at a rate of up to 5.7 tons of CO2e per acre per year. However, the field research conducted by Dr. David Johnson, a research scientist and molecular biologist at the Institute of Sustainable Agricultural Research at New Mexico State University, suggests that the use of regenerative compost can achieve even greater sequestration rates. Johnson’s field research shows that high-fungal-content, biologically rich, semi-anaerobic compost and compost extracts produce not just very high crop yields but also massive carbon sequestration, with rates of over four tons of carbon (fifteen tons of CO2e) per acre per year. As Dr. Johnson notes, if these compost practices were scaled up on the world’s four billion acres of croplands, “the entire world’s carbon output from 2016 could be stored on just 22 percent of the globe’s arable land.” Perhaps not coincidentally, Johnson’s methods mirror traditional and indigenous compost and agroecological farming practices utilized in India and other regions.

As a conservative estimate, with a combination of traditional organic and advanced organic methods on one-quarter of U.S. cropland, we will be able to achieve 663 million tons of CO2e sequestration—approximately one-quarter of what we need.

Necessary measures to transform U.S. crop production will include increasing the market share of organic food from its current 5.5 percent of all food sales and 10 percent of all produce (fruit and vegetable) sales to 50 percent of all sales by 2030. At the same time, we will need to convert 38 million acres of corn (ethanol) and soybean (biodiesel) crops back into multispecies perennial grasslands and pasture and/or organic multispecies grain production. We will also need to implement soil restoration, regeneration, and agroforestry practices on our 52 million acres of idle or fallow land, utilizing government programs to subsidize farmers for restorative and regenerative practices.

We already have the technical know-how to accomplish all of the above. What we lack are policy initiatives to support a large-scale transition to regenerative agriculture practices. Given the urgency of the climate crisis, and the influence of industrial agribusiness and fossil fuel industry lobbyists over our political process, chipping away every five years at Farm Bill policy provides little hope of achieving transformational, much less rapid change.

U.S. taxpayers currently subsidize industrial chemical agriculture to the tune of $9 billion a year. Under a Green New Deal, food and farming policies would shift support away from agricultural practices that contribute to global warming, and instead reward farmers and ranchers for restoring the soil’s natural capacity to sequester massive amounts of carbon.

This edited excerpt from Grassroots Rising: A Call to Action on Climate, Farming, Food, and a Green New Deal by Ronnie Cummins (Chelsea Green, 2020) appears by permission of the author and publisher.

Message from Paris: We can reverse global warming