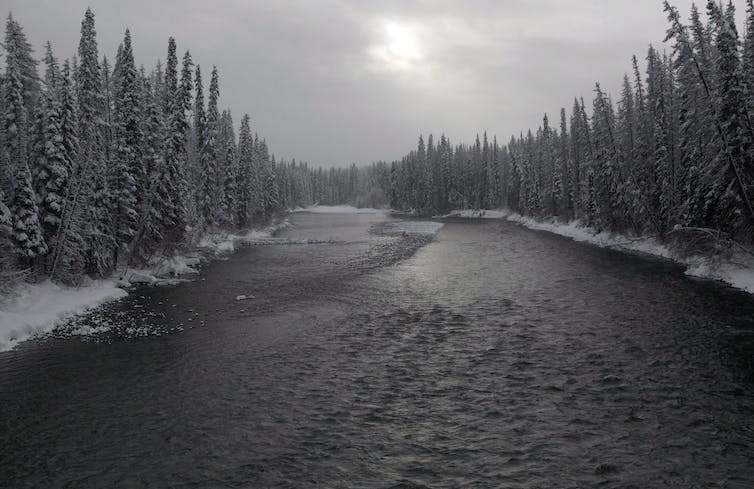 The Wedzin kwa River, an important source of fresh water for the Unist’ot’en and Wet’suwet’en people near Houston, B.C. THE CANADIAN PRESS/Chad Hipolito

An unsigned agreement between a Wet’suwet’en First Nation and Coastal GasLink along with financial documents, obtained by Yellowhead Institute, an Indigenous-led research centre, provide reinforcement to Yellowhead’s assessment of the ways these private contracts can dramatically undermine First Nation rights and jurisdiction.

The Impact and Benefit Agreement (IBA) and other documents were drafted in 2016, two years before the first payments were made to the First Nation. Because official agreements are not available to the public due to confidentiality clauses, these documents provide a valuable record of Coastal GasLink’s negotiating objectives.

In light of present RCMP raids, these documents offer important insights that support an emerging analysis around how resource extraction companies work with provinces to limit the scope of the Aboriginal and treaty rights.

One of the most alarming clauses in the document is one that positions the band as paid informers to quell internal dissent within the First Nation against the project at the cost of “financial consideration” or payouts.

The document also introduces the possibility of future negotiations with the band on the pipeline’s conversion to crude oil.

The pipeline, a natural gas project by Coastal GasLink owned by TC Energy, has been approved by the B.C. government, but it is being opposed by Wet’suwet’en Nation hereditary leadership in the region.

It has been criticized by Amnesty International, B.C.‘s Human Rights Commission and the UN Committee for the Elimination of Racial Discrimination who say all First Nations affected by the pipeline should give free, prior and informed consent before it can proceed. 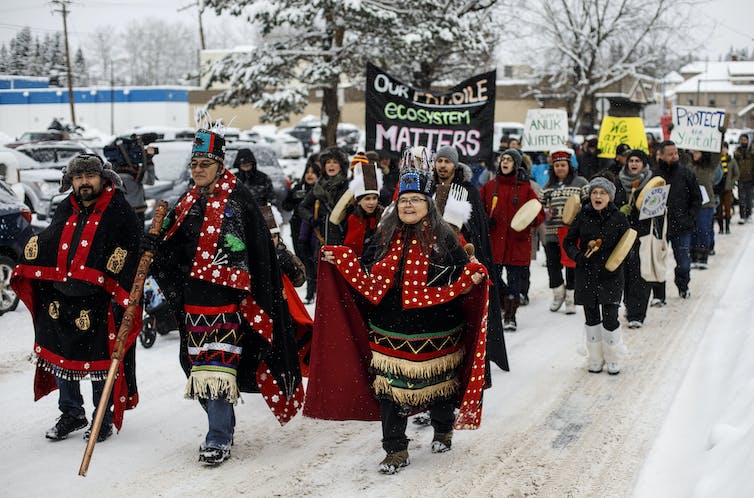 Provincial and federal governments, industry and the First Nations LNG Alliance have responded to criticism about the contentious project by citing the consent of elected band councils along the route. Coastal GasLink has signed agreements with 20 First Nations, including with each band council in the Wet’suwet’en Nation.

But the terms of consent this unsigned agreement seeks to secure should raise serious concern for those watching the conflict unfold.

According to the unsigned IBA, Coastal GasLink aims to secure “irrevocable consent” for the project from the First Nation.

The First Nation must also act to dissuade band members from engaging in any internal dissent within the First Nation against the project. The unsigned agreement reads:

“[The First Nation] will not take, and will take all reasonable actions to persuade [First Nation] members to not take, any action, legal or otherwise, including any media or social media campaign, that may impede, hinder, frustrate, delay, stop or interfere with the Project’s contractors, any Authorizations or any Approval Processes.”

Experts on IBAs have been warning for years that serious issues can arise when commercial law is used to interpret Aboriginal constitutional rights. With these agreements, we now see how. The draft agreement states:

“[this is the] full and final satisfaction of any present or future claim by [the First Nation] … against Coastal GasLink Pipeline … for any infringement by the Project of [the First Nation’s] Section 35(1) Rights.” 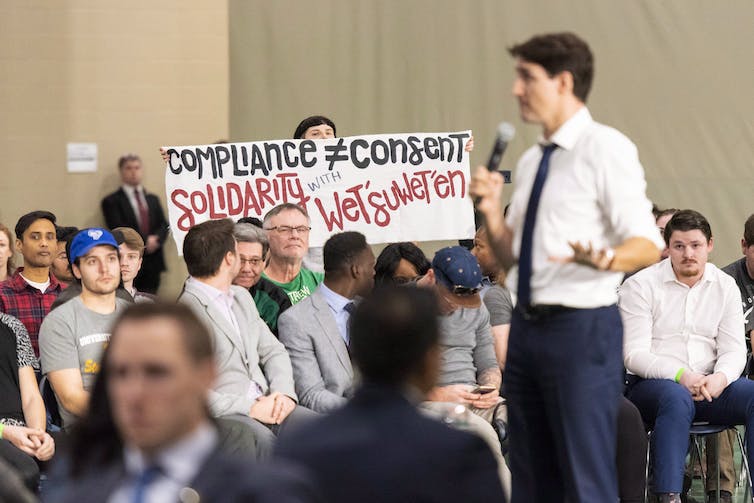 Chelsea Flook holds a protest sign referencing RCMP actions at the Wet’suwet’en Nation in B.C., during a town hall at University of Regina in Saskatchewan on Jan. 10, 2019. THE CANADIAN PRESS/Michael Bell

The extent of constitutional Aboriginal rights is being defined here by a private energy corporation, specifically limiting the exercise of Aboriginal rights. A separate provision affirms that the band can take legal action against British Columbia.

Future protection is granted to Coastal GasLink in the case that Aboriginal rights are expanded to the nation through legal or policy means. The draft agreement states:

“If [the First Nation] obtains any interest in land including Aboriginal title or ownership or jurisdiction over lands used by the Project … [the First Nation] affirms the Authorizations … will continue” and that these changes will not affect the Agreement.

Dayna Nadine Scott, a law professor at York University, has recently completed a research project interviewing lawyers who have experience drafting IBAs, due out in the spring. She says this language is highly problematic and is often referred to as “gag orders,” preventing communities from raising concerns when new issues come to light.

Therefore, the unsigned agreement restricts the band from challenging any of the company’s legal rights of development, even in the case of changes to the First Nation’s legal rights, as recognized by courts or governments.

The unsigned agreement also raises the issue of the possibility of converting the pipeline for other uses. Previously, First Nations in the region were almost unanimously opposed to the Northern Gateway pipeline proposed by Enbridge, because it carried significant environmental risks, such as oil spills in coastal waters. Coastal GasLink garnered significantly more support, in part because of its pipeline would carry natural gas, not bitumen.

The unsigned agreement says: “Coastal GasLink will not convert the pipeline component of the project to use for transportation of crude oil, bitumen or dilbit without the consent of [First Nation].”

That line, “without the consent of First Nation,” means the subject of conversion was very likely raised in negotiations between the parties. The First Nation protected itself by confirming this change would require an amendment or a new agreement altogether to obtain consent for the change. 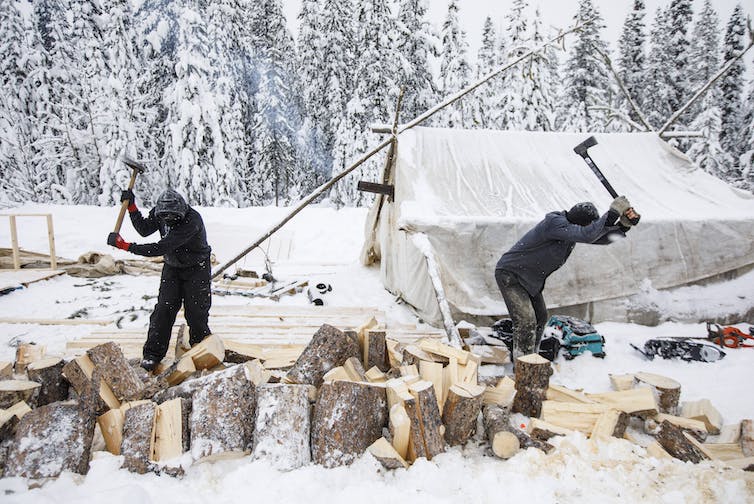 Supporters of the Wet’suwet’en hereditary chiefs and who oppose the Coastal GasLink pipeline, chop wood for a support camp just outside of Gidimt’en checkpoint near Houston, B.C., on Jan. 9, 2020. THE CANADIAN PRESS/Jason Franson.

Though B.C. introduced a regulation in 2015 against the conversion of LNG pipelines, it has yet to be tested and could be repealed.

A once-shuttered energy corridor could re-emerge if the LNG pipeline is built. Hydrocarbons are Canada’s biggest export commodity, with $129 billion in exports in 2018. Enbridge was unable to secure a corridor through the region previously, but TC Energy, the owner of Coastal GasLink, is aiming to succeed.

LNG Canada is already subsidized by the province of B.C. for $5.35 billion. A further $1 billion in estimated subsidies will be provided by the federal government in exemptions from tariffs on steel imports.

Horgan has expressed concern about First Nations experiencing “systemic poverty” and characterized the Coastal GasLink investment into First Nations as “a pathway to prosperity,” according to recent statements in the press.

But a substantial amount of financial support to First Nations are derived from public coffers. Rather than alleviate “systemic poverty” in communities directly, the B.C. government is channelling these dollars through energy companies. Therefore, making First Nation funding contingent upon support for pipeline deals.

The summary of financial benefits obtained by Yellowhead shows that B.C. will put up $1 million to the band in signing payments, $5 million in construction and in-service payments, and an estimated $40 million total in annual operation payments over 40 years. These numbers confirm amounts committed in a Natural Gas Benefits Agreement signed between the parties.

As the RCMP descend on Wet’suwet’en territory it is worthwhile to reflect on how social license is achieved by industry to access Indigenous territories.

The provincial government has downloaded its constitutional obligations to energy companies to determine the scope and assertion of Aboriginal rights.

A hand-in-glove system, the B.C. government has supported the current raids through financial incentives that have forced communities apart.

With upwards of $7 billion on the line in government subsidies, the interests of Coastal GasLink’s viability appears to have been put far ahead of Wet’suwet’en rights, title and justice.