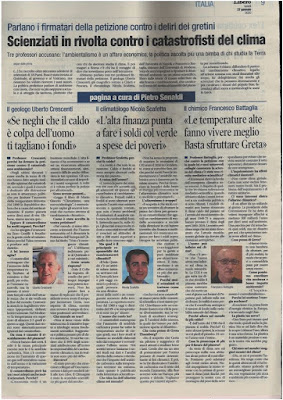 The full page of a few days ago of the Italian newspaper “Libero Quotidiano” with interviews with three Italian scientists (Crescenti, Scafetta, and Battaglia) opposing climate science. The title says “scientists rebel against the climate catastrophists.” As a newspaper, “Libero” is probably at an even lower level than that of such wonders of the gutter press as the “Daily Mail” in Britain and the “National Enquirer” in the US. The problem is that what we read on Libero now may be the harbinger of worse to come

Sometimes, my American friends tell me how lucky I am because I live in a country where the top politicians haven’t embraced climate science denial as they did in the US. It must be wonderful, they say, not to have a president like Mr. Trump, nor to have to expose yourself to the hate of the deniers for expressing your opinions on climate.

Well, it is not so simple. It is true that, so far, Italy has managed to escape the worst political monstrosities that took over the debate on climate in the US. So far, most high-ranking Italian politicians maintained a low profile, preferring to have climate science attacked by lower level henchmen of theirs. The same strategy has been used by most European politicians.

But, clearly, things are changing: climate is becoming a politically explosive issue. Some lobbies are starting to understand that they are going to lose big if something serious is ever done to face the climate crisis, and they react by anti-science propaganda campaigns. Even ordinary citizens are starting to perceive that their economic (maybe also physical) survival is at stake. Many of them tend to react with the first of the five stages of grief: denying the existence of the problem. And the right is starting to consider if they can profit from the developing debate to obtain political gains.

Italy seems to be at the forefront of the trend. Immediately after the recent regional elections, a setback for the right, the Italian Right-Wing Media started a new campaign that targeted climate science. Earlier on, they had managed to find a small group of scientists who were willing to declare that climate change doesn’t exist, or that it is not a problem, or that it is an excuse to have us pay more taxes, you know, the usual arguments. A declaration in this sense obtained less than 100 signatures, mostly by retired geologists and people with no formal qualifications in science. It was diffused also outside Italy, where it gained some 500 signatures. (read here the details, in Italian).

This story is now all over the right-wing newspapers again, together with daily attacks against Greta Thunberg, part of an ongoing smear campaign against climate science. All this is remarkable: even in Trumpland, there doesn’t appear to exist such kind of politically coordinated action against science that makes use of a group of elder scientists who, apparently, don’t care about destroying their own reputations. So, why is this happening in Italy?

Right now, Italy could be defined as a backwater province of the Global Empire. But it is far to be a quiet backwater: quite the opposite. Social tensions are on the rise, the economy is not going well, unemployment is widespread, politicians are as bad as they may be, and struggling to become even worse. On top of all that, Italians score poorly with literacy and numeracy skills.  Most Italians can read and write, but their ability to understand a written text of even minimal complexity is low. In short, Italians are angry and they can’t understand what’s hitting them. They are the ideal target for the kind of hate campaigns that target someone or something as being the “enemies of the people” to be eliminated.

Several targets for a major hate campaign seem to be under testing: immigrants, Muslims, intellectuals, Communists, Angela Merkel, the Euro, the European Union, the banks, and more. And, of course, also climate science and climate scientists. The tests are being performed right in front of us and we’ll see how effective the campaign against science will be. If it is successful, it may teach a thing or two to right-wing organizations in other countries.

There have been other occasions in history for Italy to be a laboratory to test new political ideas. It happened when Machiavelli experimented for the first time with the idea of a “citizen army,” later on with Mussolini and his Fascist party, then with Berlusconi and his media-based political success, and more. So, it will be interesting to see how the climate debate evolves in Italy in the near future. And, as usual, living in interesting times is a curse.