Since 2016, I’ve been book touring in dozens of states — first with “Viking Economics” and then with “How We Win.” I’ve done events in hundreds of bookstores, universities, and civic and religious spaces. Time and time again, I get the same kind of question, and my puzzlement has only grown.

Just last month, at a crowded meeting sponsored by 350.org in Madison, Wisconsin, dozens of people were asking me how they can make their work for justice more effective. One person recalled how the move of Gov. Scott Walker in 2011 to take away public workers’ rights was met by an immense outpouring of Wisconsin citizen rage. Direct action filled the capital and paralyzed the government.

“That was nonviolent protest, right? And it disrupted everything — even Democratic legislators traveled out of the state to prevent the Republicans from taking away the rights of state workers. And still the nonviolent struggle failed!”

“On the contrary,” I countered, remembering that I had been in Madison at a crucial moment for consultations, along with organizer Daniel Hunter. “The nonviolent campaign was deliberately dropped. Despite our advice, the leadership shifted strategies, going instead for a recall election, which they lost.”

Continuing to explain, I said, “The Democratic leadership and some labor allies believed that the ballot box is superior to what was actually working. It wasn’t the nonviolent campaigning that failed — it was interrupted. It’s the premature switch to an electoral strategy that failed.”

At another recent event, in a Pennsylvania bookstore, I was challenged by some women deeply disappointed by the demise of Occupy in Harrisburg. Inspired by Occupy Wall Street in 2011, their city’s Occupy action became a dramatic presence. “If nonviolent action is so powerful, why didn’t that work?” the activists asked.

“In most cities, the Occupy movement focused on a single tactic,” I explained, “and didn’t have the flexibility it needed to grow beyond a protest. It was like the opening act of a play that had no larger narrative. Occupy participants needed to make clear winnable demands, adopt other direct action tactics, and escalate in order to grow. In other words, after a great start you needed to transform into a nonviolent direct action campaign.”

A campaign has a clear demand with a focus on a decider who’s responsible for — or can meet — the demand. Campaigners start and sustain a series of actions that escalate as the campaign grows.

In the 1960s and ’70s, nearly everyone interested in progressive change knew what a campaign looked like. Black students walked into a lunch counter, demanded coffee, were thrown out of the store and came back again and again, often escalating by adding picketing and boycotts. In short: a demand, a decider (the store manager), a series of actions, escalation.

Racial minorities, students, elders, differently-abled people, workers, LGBTQ people, environmentalists against nuclear power: They knew what nonviolent direct action campaigns were and often used them well. “Demand something, target the entity that can yield the demand, do a series of actions, escalate and grow.” 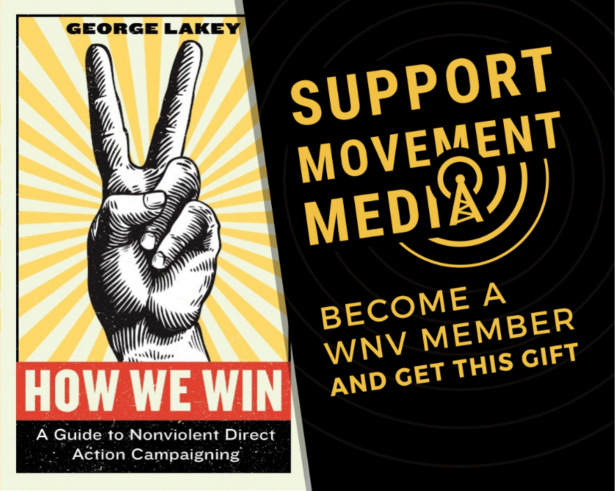 Direct action campaigns were the engine that built powerful movements that changed the United States to the point that the economic elite became alarmed. The 1 percent then launched its counter-offensive, officially by President Ronald Reagan in 1981. The Democratic Party did its part in the counter-offensive by co-opting as many of the movements as it could, the Democrats pleading that the ballot box was a better technology for change than nonviolent direct action campaigns.

The actions that campaigns did were called “protests,” supporting confusion between one-off actions and genuine campaigns. By the 1980s the mainstream media had coined a new, condescending meme: “protests vaguely reminiscent of the ’60s.”

I can’t simply fault our opponents, their allies and the mainstream mass media for the disappearing concept of “direct action campaign.” Most of the movements themselves, previously winning, shifted in the 1980s to a defensive strategy, trying to retain the gains they’d already made.

Defense is a loser’s game. Labor lost ground, as did civil rights, women and environmentalists. They had to lose, because as football coaches and generals (and even Gandhi) could tell you: Defense is for losers.

With the stunning exception of the LGBTQ movement, which kept winning because it stayed on the offensive, the choice by the major movements to go on the defense spread a psychology of reactivity. “Let’s react to this outrage, and that one, and that one.”

Reactivity plays the 1 percent’s game, since the elite has the money to organize as many outrages as it wants (voter suppression, attacks on Planned Parenthood, take-aways from labor, new gas pipelines, immigrant children in cages and many more). They may even enjoy watching us react; it confirms who’s in charge.

Reactivity promotes one-off demonstrations, and activists can weary themselves running from protest to protest. In the reactive confusion, the option of becoming pro-active and starting nonviolent direct action campaigns got lost.

Fortunately, some didn’t forget. In this period, the Coalition of Immokolee Workers — along with student allies — organized winning campaigns for farm workers by creating campaigns targeting fast food chains. Some environmentalists used campaigns to win against toxic polluting. Some students forced their colleges to abandon sweatshops when purchasing regalia, and even to pay a living wage.

But the Democratic Party’s choice to go on the defensive after 1981 influenced many progressives who believed that mainstream Democrats are smart strategists. Even though defensive Democrats steadily lost previous gains and moved to the political right, many grassroots activists seemed to accept that reactivity is strategically correct. After all, the Democrats’ top leader, Nancy Pelosi, announced in January that her first priority would be defending Obamacare. Now she has joined a different defense: the traditional procedures of governance.

Given this descent of political culture into reactivity, perhaps it’s not surprising that nonviolent direct action campaigning got lost as a strategic option even for many people who identify themselves as activists.

How can we re-take the offensive?

Campaigns are perfect for turning away from defensive fights and moving back into what works: Going on the offensive by framing an issue into a demand, choosing a decider, planning a series of actions then escalating and growing. The issue can be local, regional, national, highly ambitious in its demand or less so. We get to choose — it’s an existential move of empowerment.

Workers can teach us.  Despite being battered by the elite counter-offensive launched four decades ago, they have not forgotten what a nonviolent direct action campaign is. When, in 2018, the leadership of the West Virginia teachers resisted going on the offensive, the members forced a strike vote and the majority chose to strike — and won. Feeling inspired, teachers in multiple other states and cities went on strike (one form of the nonviolent direct action campaign), often winning, followed by the United Auto Workers taking on the giant General Motors Corporation and winning.

In a St. Petersburg, Florida, Quaker Meetinghouse a woman came to me eagerly during the break or a workshop I was leading and told me she had helped to organize a strike as a labor organizer. “It was hard work, very hard, but it was so inspiring — all that solidarity, taking that risk to win! It was,” she said, eyes shining, “the greatest experience in my life.”

A new workshop is available to welcome people into campaigning

Direct action campaigns provide the power that can drive successful movements to grow and win bigger goals than each individual campaign focuses on. In this way, more macro-level changes can result from multiple campaigns combining, as happened in the movement against nuclear power and when the multiple divestment campaigns against apartheid resulted in a major power shift in South Africa. I’m eager to build on this dynamic and create a narrative in which multiple campaigns power multiple movements, which combine to reach a scale where the economic elite can be removed from dominance.

That’s the organic path that began to unfold in the United States in the 1930s and then again in the 1960s and ’70s, both times scaring the 1 percent considerably. In the Nordic countries, the same path unfolded under more favorable conditions, and they were able to move from multiple campaigns powering multiple movements to a movement of movements that could force out their economic elites. (Without that happening, there would have been no “Nordic economic model” of democratic socialism.)

Because the stakes are so high at this political moment in the United States, I decided to create a short workshop that invites people into the world of strategic nonviolent campaigning, which I call the “How We Win Workshop.” I believe that activists can recover lost knowledge, namely: that we can strategically assert power in the face of state repression and right-wing violence against us, and win.

In less than half a day participants learn how the rapid flow of events in the U.S. life now favors direct action campaigns, and how those campaigns can build movements on such a scale that we can contest for power on a national level.

After I led a series on workshops on both coasts and the Midwest, I realized that many more people, ranging from college students to elders, are eager for the workshop than I can reach. I’ve begun a train-the-trainer process so other experienced facilitators can lead this workshop.

If your organization, after discussion, wants to bring the How We Win Workshop to your area, reach out in the comments or contact me through this site.