Welcoming everybody to his farm on a searing August afternoon, Ron Rosmann lets the pleasantries go for 12 minutes before getting to the heart of things. Around him, about 70 growers sit like school kids on bales of hay, braced to hear him.

Rosmann has been farming organically for 36 years on western Iowa’s fertile hills, and his voice is as gravelly as the road that runs alongside his land. You might think farming without pesticides would get easier over time, but you’d be wrong. An impossibly rainy planting season and runaway giant ragweed have made this year his toughest yet.

“What are we experiencing?” he asks the group. “Warmer temperatures, more rainfall, warmer nights, 10 years in a row of cold, wet springs. I’m getting more and more nervous.”

The growers, all members of Practical Farmers of Iowa, or PFI, are here to learn how Rosmann copes. A rare alliance of organic and conventional farmers, their views on climate change run the gamut of opinion. They meet on different farms around the state to share practices and today have come out for a “field day” to observe how Rosmann and his family produce beef, pork, chickens, eggs, popcorn, and grains on 700 acres—without chemicals.

While long-term climate change is prompting growing activism, farmers like these often register its near-term effects first. It contributes to soil erosion and severe weather events. It has increased annual precipitation in Iowa at least 8% over the past century, according to the state Department of Natural Resources. And the effects keep multiplying.

The field day includes a hayrack tour of the Rosmanns’ pesticide-free fields. On one section, turnips are planted as a cover crop, and volunteer oats and barley also pop up. Down the road, the group visits naturally ventilated “hoop house” pig shelters: metal arcs covered with greenhouse plastic, in which deep cornstalk bedding decreases manure runoff risk. They stand in front of long compost mounds, where butterflies land as Rosmann describes how to balance straw and manure. The farmers end their tour back in the barn, dining on the Rosmanns’ organic coleslaw and pulled-pork sandwiches.

As Rosmann, a self-declared independent Democrat, pontificates about climate change, Mark Peterson, a conservative Republican, studies his phone. The two Iowa growers admit they don’t see eye-to-eye on the issue.

Peterson, who grows grain conventionally an hour away, believes changing weather patterns may be cyclical. “I respect his opinion,” Peterson says after Rosmann’s climate talk. “It’s scary, there’s no doubt about that. But the cause—I’m not sure that’s as important as figuring out what we’re gonna do about it.”

While they may not agree on what has gotten them here, growers like Rosmann and Peterson are thinking beyond politicized climate change arguments to figure out solutions. They’re trying to adapt to the differences they’re experiencing, and even trying to mitigate them.

Along with fellow PFI members, they’re approaching agriculture more regeneratively: focusing on soil health, planting cover crops, reducing chemicals, and minimizing the runoff that contributes to the Gulf of Mexico’s fishless “dead zone.” In the age of climate change, their sharing of experience is increasingly vital.

“PFI, in my view, is the best example in this country right now of the blending of science and local wisdom,” Laura Lengnick says. She’s a North Carolina-based resilient-agriculture researcher who travels the country talking to groups like these.

Organizations like PFI remain rare, Lengnick says. The group has “been a constant star in my career, literally from when I was an undergraduate student, because they’re so unique.” 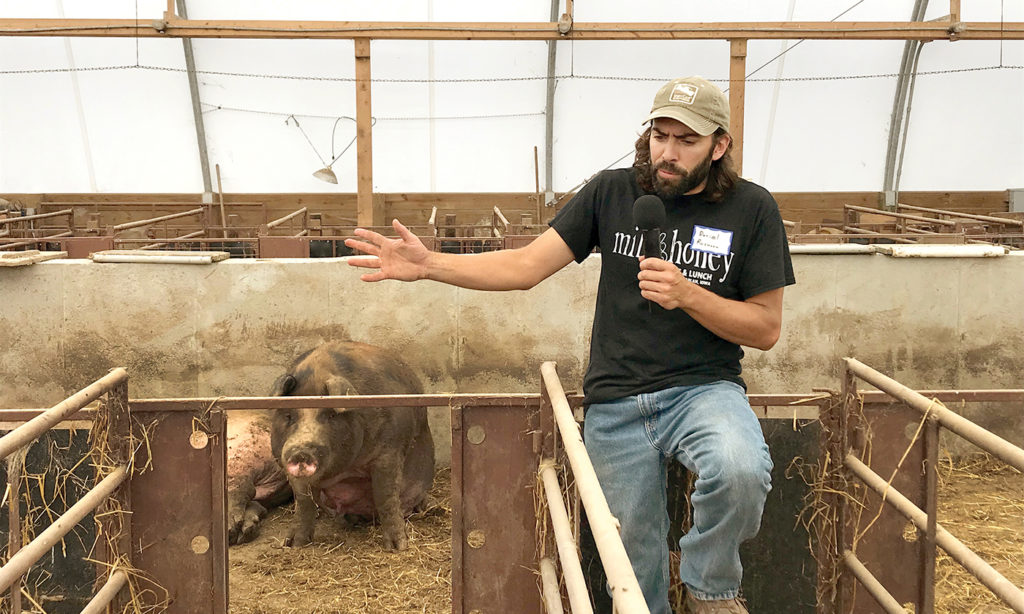 Most people don’t keep diaries of the weather. Only novelties, like big storms or long stretches of unseasonable temperatures, register as unusual. It’s up to scientists—meteorologists and climatologists, mainly—to tell us about how today’s weather fits into larger patterns.

Farmers are different. Weather doesn’t just affect their Saturday at the park; it dictates their livelihood, and they keep exhaustive mental and written records of it day by day, year by year.

That’s why in 2019, you don’t need to tell many farmers that climate patterns have been shifting. When Lengnick started working on her resilience book in 2012, things were touchier in agriculture. Many farmers didn’t want to go on the record about climate change. “I see a sea change since then,” she says. “Everybody’s talking about it.”

In August 2019, Alan Sano, a central California farmer, argued in The New York Times that drought, heat, and wildfires have put growers at the climate-change frontlines. The U.N. Intergovernmental Panel on Climate Change had just warned that soil is being lost up to 100 times faster than it is forming. “We don’t need to read the science—we’re living it,” Sano declared.

Sano and his farm manager, Jesse Sanchez, are part of the Conservation Agriculture Systems Center, a working group at University of California, Davis. The working group pulls a mix of California farmers together to share eco-friendly practices like reducing tillage. Like PFI, they often host field days to help farmers share techniques.

In New Mexico, the Quivira Coalition, which was formed in 1997 and believes ranching should support a healthy ecosystem, brings livestock producers together to build resilience. Today Quivira includes 750 members of all political stripes. “Out here, people are coming from extremely rural areas, and there’s a complexity of views that is hard to characterize,” executive director Sarah Wentzel-Fisher says. “But I think the underlying commonality we have is that people really care about the land they steward and animals they care for.”

Practical Farmers of Iowa has a longer history. Fifty members formed the organization in 1985 as a way to learn from each other. These days it numbers more than 3,500 and prides itself on being big-tent—with wide-ranging views around politics and the environment.

Iowa made national headlines for this spring’s record flooding that has PFI members still reeling.

At his Bent Gate Farm, Peterson’s two Labrador mixes, Emmy and Riley, jog out to greet a visitor. Dogs and cats are the farm’s only animals, but Peterson has a friend’s cattle graze on his cover crops.

It begins to rain, and from his Chevy Silverado, Peterson surveys the cover-crop mix of buckwheat, sunflower, radishes, and turnips he’s growing on 50 acres to help manage soil erosion. Each 1% increase in soil organic matter, scientists say, helps soil hold up to 20,000 gallons more water per acre.

The soil here is healthier now, Peterson says, and will yield more corn later. The field’s traditional wet spots haven’t been as big or lasting. The winter wheat will anchor the topsoil. As he talks, three geese alight. Lately Peterson has seen three coveys of quail, and up to seven pheasants in a one day. “I see that as a sign of overall farm health,” he says.

Peterson still uses the herbicide glyphosate, in the form of weed killer Roundup, although sparingly. On fellow PFI member Denise O’Brien’s Rolling Acres farm 45 minutes northeast, even that would be anathema.

O’Brien has farmed organically for 43 years. On this day, she and a mentee, Amber Mohr, are digging up potatoes out back.

Rows of veggies stand at attention around them. O’Brien is just as proud of her sustainable high tunnels. Working like greenhouses, they require irrigation but extend the growing seasons. O’Brien installed the hoop shelters on tracks in 2013. “This is the way vegetable farmers are going to be mitigating climate change, with high tunnels,” she ways. “It’s going to protect the soil.”

She and Mohr grab the harvested vegetables and move into a barn as storm clouds loom. O’Brien works barefoot as she hoses stubborn dirt clumps that stick to some carrots, later grabbing a higher-pressure hose to finish the job. Outspokenly liberal, she confesses to occasional frustrations with PFI.

She recounts losing her temper in August, when one farmer on PFI’s general listserv asked how to deal with sprayed pesticide drifting over from her neighbors’ farm. Pesticide drift is a hot-button issue with the farmers. During the Rosmanns’ field day, a crop-duster buzzed overhead. “Incoming!” farmers pointed. “Hope it’s not gonna spray us,” one muttered.

The pesticide-drift post was moved to PFI’s smaller policy listserv, which O’Brien protested. After nearly 40 years as a member, she threatened to quit. “I don’t like to end on a threat, but this … makes me sick not to discuss,” she wrote.

Such flare-ups aren’t uncommon, the natural byproduct of bringing people together across ideological lines.

Within a couple days, O’Brien had decided to stay, though she wishes the group would take a firmer stand on agriculture policy. Still, she’s glad a rare organization like it even exists, with its mix of growers and ideas. “It’s really neat that conventional farmers are a part of PFI, because they to me are the farmers of the future, figuring out how to use more sustainable practices,” she says. “The other thing is, I’m still learning a lot from other farmers.”