This article is part of a series on rebalancing the human–nature interactions that are central to the study and practice of ecological economics, which is the focus of the 2019 ANZSEE Conference in Melbourne later this month.

As environmental crises and the urgency to create ecological sustainability escalate, so does the importance of ecological economics. This applied, solutions-based field of studies is concerned with sustainability and development, rather than efficiency and growth. Also, given that cities account for 70-80% of global economic activity and associated resource use, emissions and waste, they are central to finding solutions to the challenge of sustainability. 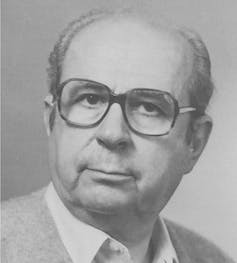 Nicholas Georgescu-Roegen was one of the first economists to argue that an economy faces limits to growth as a result of resource depletion.

A steady-state economy is both relatively stable and respects ecological limits. Drawing on the work of mathematician and economist Nicholas Georgescu-Roegen, economist Herman Daly elaborated the model, editing a 1973 anthology, Toward a Steady-State Economy.

In 1990, Daly co-founded the International Society of Ecological Economics (ISEE). It had three key principles:

Joshua Farley, who has worked with Daly, discusses some of these principles in an opening address to the Australia New Zealand Society of Ecological Economics (ANZSEE) conference at RMIT University later this month.

In a partnership program of several North American universities, Farley teaches Economics for the Anthropocene postgraduates. They apply ecological economics to “real-world environmental solutions”. Some will talk at the conference about their research.

Ecological footprints are useful ways for industries, governments and people to assess which practices we need to reduce to keep within the limits of Earth’s regenerative capacity.

Issues of environmental justice in Australia include:

A new kind of economics

Ecological economics partly developed from frustration with the narrowness of environmental and resource economics. These approaches apply mainstream economics to the environment. In doing so, they fail to incorporate critical environmental concerns that arise with inputs, outputs and waste.

In addition, ecological economists have a broader view about what “progress” is and how to measure it. Ecological econonomists are more sceptical about how much human-made capital improves on the benefits we get from nature. Critically, they ask: “How useful is it to put a monetary value on nature?”

Ecological economist Clive Hamilton discusses that question in the case of Coronation Hill in Kakadu National Park. He argues that market-based assessments such as “willingness to pay” favour market-based solutions. Similarly, Brian Coffey highlights the conundrum of monetising ecological values:

I would rather ask “why is nature important?” and “how can we live with, and within, it?”

Despite this, certain ecological economists use monetary data to make powerful ecological statements. For instance, Ida Kubiszewski and her co-authors surveyed land uses under different future scenarios. They concluded that continuing business as usual could wipe out a third of the value of Asia-Pacific ecosystems by 2050.

Solutions for sustainable and just futures

In short, ecological economics has contributors from diverse disciplinary and professional backgrounds.

Presenters to the ANZSEE conference of course include ecologists and economists. But there are also social and physical scientists, sociologists, philosophers, historians, planners and sustainability experts.