In the world of political theory, storytelling is something of a lost art. Modern western thought views political institutions as “systems”, which —much like buildings or bridges — act in ways that are consistent, predictable and replicable. Writing about politics, then, becomes a matter of describing things, not people and their collective actions.

Today’s universities train — predominantly white — middle-class people to embrace this “scientific” conception of politics. But to most everybody outside of the university, political theory is just plain boring.

In reality, there is nothing consistent, predictable or replicable about politics. Political events are firestorm of passion, loathing, danger, tragedy, hilarity and exhilaration in which nothing is certain.

Political life lends itself to narrative representation as well as to literary elements like protagonists, imagery and pacing, yet stories remain devalued as a serious way to convey political knowledge. Sadly, this is only to the detriment of social movements. How can a popular, broadly democratic ecology movement possibly form when the vast majority of people can neither understand nor enjoy the obtuse way that we talk about politics?

Social ecology is certainly less guilty of bad writing than your run of the mill political scientist — Murray Bookchin indeed wrote elegant prose — but it nonetheless suffers like much of the left from a dearth of powerful narratives. Ursula K. Leguin’s novel The Dispossessed stands as one exception that proves the rule.

FRIENDS AND ENEMIES IN STRUGGLE AND ACTION

This is precisely why Modibo Kadalie’s collection Pan-African Social Ecology is so important and instructive to social ecologists and the left in general. Drawing upon traditions of black and African storytelling as well as Pan-African thought, Kadalie consistently shows rather than tells us his message. 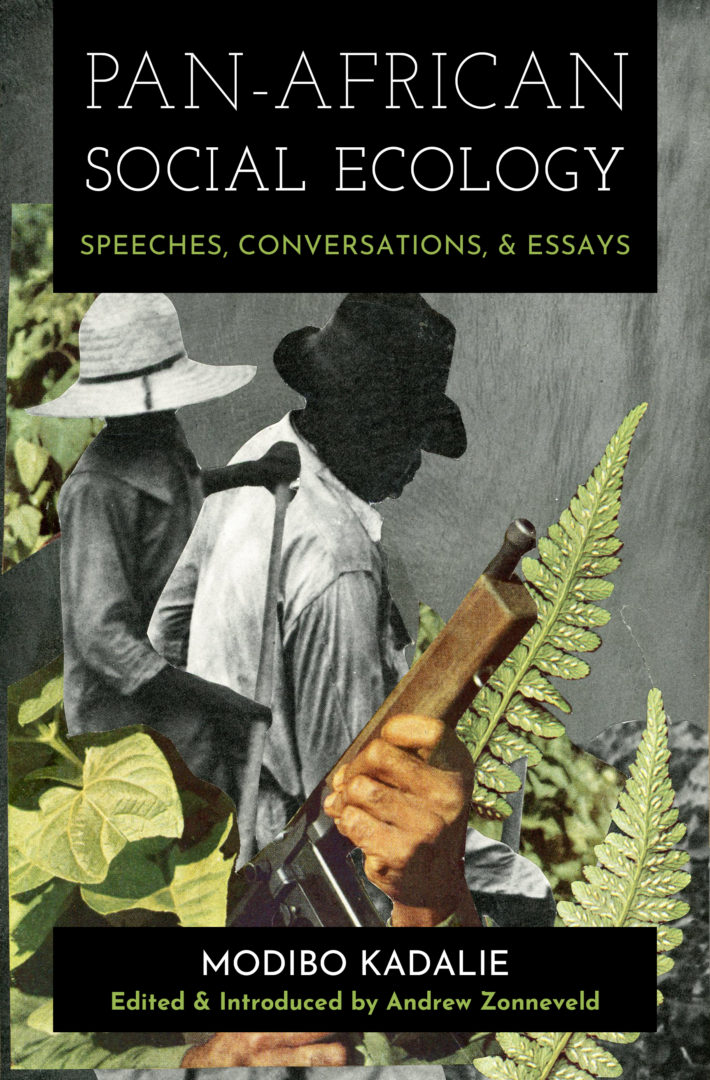 Modibo Kadalie’s “Pan-African Social Ecology” is published by On Our Own Authority! Publishing

He states complex concepts in clear, simple language and then illustrates them through engaging stories and rich vignettes. For example, in the third chapter, “You Find Your Allies in the Street” Kadalie makes an important critique of how the left thinks about identity and oppression.

Many ostensible “radicals” espouse democratic and communitarian values, but behave in authoritarian, power-hungry ways when provided the opportunity. At the same time, some activist circles insist that people with relative social privilege can never be true allies to groups over whom they hold power. Men can never truly support women or whites can never truly support blacks, and so forth.

Is this really true? How can we ever really prove or disprove such grave conclusions? Such questions swirl on the internet daily. But allyship, Kadalie writes, “boils down to knowing who is your friend and who is your enemy in struggle and in action.” He then fleshes out the nuance of this point via several anecdotes, including one especially impactful moment that took place during the 1973 student strikes and campus takeover for Black studies at the University of Detroit.

[T]here was a group of white guys called the Ohio White Cracker Rock and Roll Band…they were there in the student union building with us, trying to get people to understand what we were doing. We were being heckled. A fight was about to break out, so this guy Jesus said to us, “We’ll take care of it, just tell us what to do.”

So he had his boys — you know, they had their long hair and everything — they went over to this one white guy who was heckling, grabbed him, and took him to the other room. I ended up having to go in there and rescue him because they were really about to hurt this guy!…

That’s how you determine your allies. You have to be in motion, you know? Ally for what? You’ve got to be doing something to have an ally.

In today’s world where abstracted online debate tends to shape people’s perceptions to the detriment of common experience, Kadalie’s reminder is refreshingly simple. If politics is about action, then our political character and values — be it an individual, organization or group — appear while in motion. You cannot determine whether someone is an ally based upon their appearance or even their words.

Social ecologists should listen well to Kadalie not only because his book is written in an engaging, narrative style, but also because it reveals a wealth of horizontalist Black history that white social ecologists tend to dismiss and overlook.

A LIFE ON THE FRONT LINES

Kadalie’s remarkable life trajectory follows meaningful pathways of the black Atlantic experience and black intellectual life. He was born in Riceboro, Georgia, one of many descendent Geechee communities of self-liberated blacks allied with Seminole Indians in defiance of the United States government.

He later moved to Halifax, Nova Scotia, where in nearby Africville many self-liberated slaves found refuge from the US War of Independence. Kadalie spent the 1960s and 1970s on the front lines of occupations, sit-ins and student organizing in Detroit, Michigan.

In 1974, Kadalie raised a dissenting voice at the 6th Pan African Conference to advocate direct democracy and anti-nationalism. The same year, he protested the Southern Christian Leadership Conference (SCLC) for accepting funds from Gulf Oil and supporting neo-colonial domination in Africa.

A committed revolutionary, he continues his life’s work today in Midway, Georgia as a founding member of the Autonomous Research Institute for Direct Democracy and Social Ecology (ARIDDSE).

A ROADMAP TO A BLACK-LED SOCIAL ECOLOGY

What makes Kadalie’s reflections upon his political experiences so remarkable is their grounding in a rich, coherent conception of social ecology. Bookchin nerds will be pleased to find discussion of federated municipal assemblies, radical citizenship, post-scarcity, eco-technology, and natural evolution advanced via ethics and human reason.

Kadalie is obviously fluently versed in Bookchin. However — crucially — he arrives at many of these conclusions via the writings of black, libertarian intellectuals. C.L.R. James and Kimathi Mohammed are especially prominent. Although the lines are sometimes fragmented and faint, what one finds in this book is ultimately a roadmap toward a Black-led social ecology.

Those who would diminish or deride such an intellectual project ignore the cumulative wisdom of decades of feminist, queer, black and brown, indigenous revolutionary struggle. And they do so only to their own detriment.

Kadalie deepens and expands the relevance of social ecology by demonstrating its importance to de-colonization. By the same token, he points out the intimate relationship between global colonization and ecological destruction. In his own words:

Now in the twenty-first century, we can confidently say that hierarchically organized societies cannot solve or even adequately address ecological crises. In fact, such societies — with their nation-states, empires, and capitalist markets — have shown themselves to be the cause of widespread ecological destruction.

If Pan-Africanism, as recent history demonstrates, is going to be defined by the unity or clustering of Black-ruled nation-states and Black capitalism, it serves no purpose other than the continued oppression of Black exploited classes under Black elites…

However, the concept of Pan-Africanism is perfectly compatible with the development of locally decentralized and directly democratic institutions in areas where ordinary African people live and work. In other words, we need a Pan-African social ecology.

Many readers will no doubt notice similarities between Pan African social ecology and the project of democratic confederalism by Kurdish political leader Abdullah Ocalan. In the fourth chapter “Black Resistance and the State,” Kadalie levels a scathing reproach of black elitism and authoritarian tendencies in the black liberation movements of the late 20th century.

Centuries ago, colonial officers would select men from conquered egalitarian communities to act as “chieftains” to “represent” — control — the colonized population on their behalf. For Kadalie, the triumph of nation-states in post-colonial Africa and the Caribbean and participation in the ruling classes only perpetuates these colonial logics and oppressive social relationships.

Kadalie’s book is one more testament that a collective awakening is taking place to jettison the state and redefine global history from the bottom up.

For all this, direct democracy by itself can hardly promise social and ecological restoration. Democracy is not a matter of implementing formulaic procedures and structures; it is a matter of fostering bonds of mutual support and the sharing of communal power.

It is no mystery, then, why Kadalie chooses to explain social ecology’s core concepts via his own political experiences. Narrative creates human intimacy across the color-line, education, time and space.

Through stories, Kadalie primes readers to participate in the intimate, listening-based politics that he advocates. We need these kinds of stories in the milieu of social ecology, as well as in the broader left and beyond.