Thanks to the efforts of climate activists, the climate and ecological emergency has never been more prominent. But acknowledging the problem is just a starting point. Now this momentum must be harnessed to dramatically reduce greenhouse gas emissions and reverse habitat destruction.

To accelerate this transition, we need a vision of the future – and there are many out there. The problem is that some of these visions severely misunderstand and underestimate the nature of the crises we face. If we rally behind the wrong one, we may end up propelling the planet all the more quickly towards destruction.

Building a future in sync with the natural world will not be easy. Our collective imagination is bound to ideas that have delivered us to the cusp of environmental catastrophe. The ways we work, travel, eat, and even think are all locked into systems that perpetuate the use of fossil fuels, encroach on the natural world, and exploit wealth and resources from the Global South.

This means that to avoid the worst of climate breakdown, we have to transform every aspect of society as we know it. But to do this well requires deep understanding of why industries have been allowed to pollute the upper atmosphere, and how we can build economic and political infrastructure to stop emitting greenhouse gases and degrading ecosystems.

Worryingly, this understanding is sorely lacking in two of the most popular emerging visions of the future – ecomodernism and left accelerationism. In a nutshell, both envisage that technological progress will allow us to address climate and ecological breakdown while also dramatically increasing production and consumption.

These imagined futures have obvious appeal to those who enjoy the luxuries of consumption and technological innovation. But the premises on which they rest are fatally flawed.

The latter is completely disengaged from sustainability sciences. Ecomodernism is more engaged, but it tends to ignore the unjust distribution of environmental benefits and burdens from climate breakdown, and downplay how our the organisation of our societies drives ecological crises. As a result, it focuses only on superficial social change. Proponents of both are often hostile to many ideas and individuals within the environmental movement. As such, they are seriously derailing momentum in tackling the climate crisis. 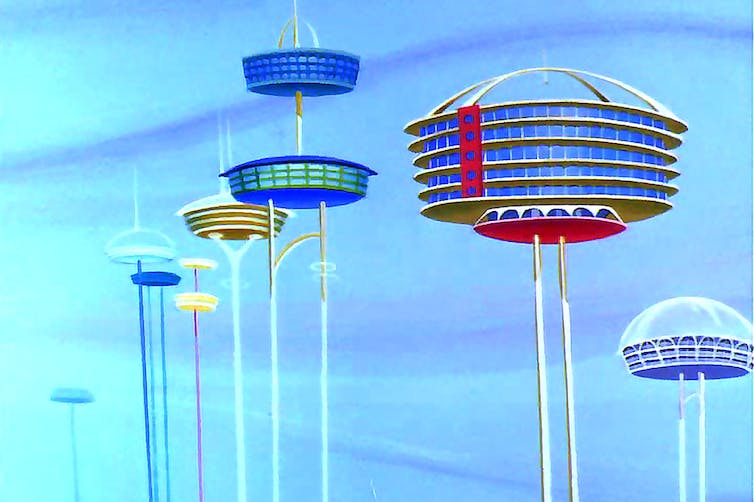 Wouldn’t it be easier if we just lived on the ground? James Vaughan/Flickr, CC BY-NC-SA

The scientific evidence tells us that it is simply not possible to continue increasing consumption and greenhouse gas emissions on the current trajectory without exhausting Earth’s resources and crossing planetary boundaries – limits to Earth’s biological, chemical and physical systems that represent a safe operating space for humanity. Beyond these boundaries, we run the risk of causing abrupt and irreversible environmental changes that threaten the stability of Earth’s systems and human civilisation.

For starters, all technology-focused future visions require wildly unrealistic increases in energy generation. This is a problem because since we have used up most of the easy to access sources, the quality of our energy resources is declining. Compared to a few decades ago, we need to input much more energy for every unit of energy we produce. While the energy cost of renewables is falling, vast increases in consumption only make the transition to renewables harder, and will put a huge additional burden on our already vulnerable energy systems.

To navigate the high resource demands of their imagined futures, ecomodernist and left accelerationist visions rely on fairy tale technologies that do not exist. For example, the future vision of Fully Automated Luxury Communism (FALC) peddles promises of asteroid mining to address resource shortages on Earth.

FALC’s vision has been accepted uncritically in prominent media outlets such as The New York Times and The Guardian, despite being thoroughly debunked by environmental scholars.

This distracts from the hard but necessary work of changing the energy system now. Given the risks presented by climate breakdown above 1.5℃ of global heating – possibly just a decade or two away – we cannot afford to back future visions that do not prioritise immediate and large-scale cuts in greenhouse gas emissions.

More fundamentally, the ideas underlying technofix futures arguably aren’t far from the type of thinking that created the climate and ecological crises in the first place. They imagine luxury as heavily based in material consumption – as author of FALC’s manifesto Aaron Bastani says: “Cartier for everyone, MontBlanc for the masses and Chloe for all.”

As a result, they tend to overlook and devalue aspects of our world that are less obviously associated with luxury: the natural environment, clean air, animal life, time spent with family and friends, local communities. These things may not provide material luxury, but they do make life worth living – and do not necessarily have to use up our scarce energy and material resources.

Where FALC attempts to provide for all using the notion of luxury, feminist and ecologically-oriented economists and design theorists look to alternative strategies to generate prosperity. We propose a redesign of future ways of living based on different values: the ethics of care, regenerating nature, and distributing its benefits fairly.

Cooperatives, time-banks and community-owned renewable energy systems are already putting these values into practice. These organisational models create regenerative and distributive systems supporting prosperity for all, and addressing climate breakdown at the same time.

Of course, these alternative futures will require us to fundamentally transform our culture as well as our economy. Clearly technofix futures are more attractive options for many of those who are not on the frontlines of climate chaos – and who might be able to continue living high-consumption lifestyles for a decade or two more.

But nothing other than dramatic societal transformation will be sufficient to avoid catastrophic climate change for the vast majority of the world’s population – and eventually, everyone. It may sound daunting, but rejecting the ecologically harmful assumptions on which our culture is currently built offers us a unique chance to build a healthier and fairer world.