Once there were six waterways cursed by pollution.

But terrifying toxins and oozing oil spills were not the first dooms to befall these rivers, each of them had already been dammed. The dams had been constructed for a variety of important reasons, but as the years passed and they fell out of use, an evil crept over them.

Rivers are pathways between realms, watery corridors that connect oceans to freshwaters. Every year millions of fish, including salmon, herring, eel, and other scaly creatures, make heroic migrations between rivers and the ocean to spawn. Dams stop this migration dead, cursing fish to spawn in a shadow of their former habitats.

Oil spills, hazardous waste, and ship groundings hex America’s oceans and rivers every year. Pollution drives people away from beaches, leaving them silent as a boneyard. NOAA looks for ways to bring waterways back to life. To do this, NOAA and our partners often look for opportunities to remove or bypass barriers for fish passage such as dams, faulty culverts, or grates.

This is the sordid tale of six dammed rivers, where pollution settlements provided the opportunity for waters across America to rise from the grave. 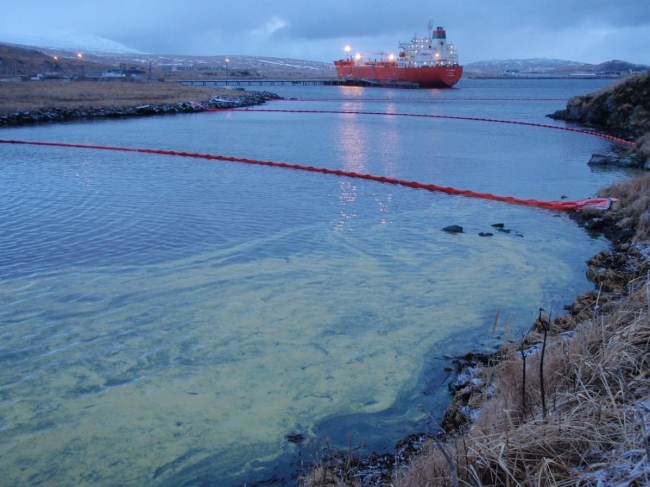 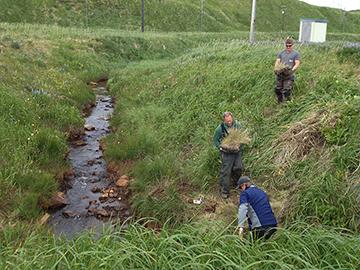 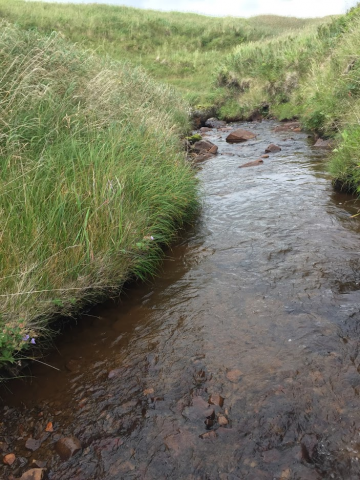 In 2010, an oil spill occurred on the remote Adak Island in Alaska’s Aleutian Islands. Fuel pumping to an underground storage tank overfilled and spilled 142,800 gallons into Helmet Creek and its banks. As a result, pink salmon, Dolly Varden trout, aquatic insects, stream habitat, and potentially birds and marine mammals, were harmed. A settlement was reached in 2013 with Adak Petroleum to fund restoration projects that same year.

To improve fish passage in the creek, creosote pilings and culvert grates were removed from the stream. This opened up habitat for salmon and other migratory fish that was previously unreachable. The stream was then re-graded, allowing for improved passage, and 55 gallon drums that had been abandoned in and along the creek were removed. The Adak oil spill assessment and restoration was challenging due to the island’s remote location, making this stream restoration an especially rewarding achievement. 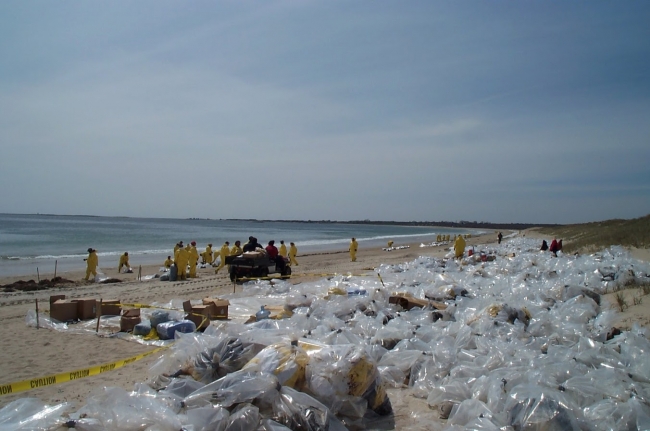 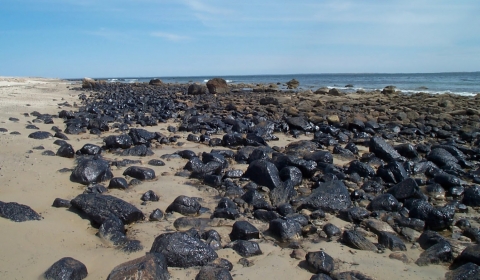 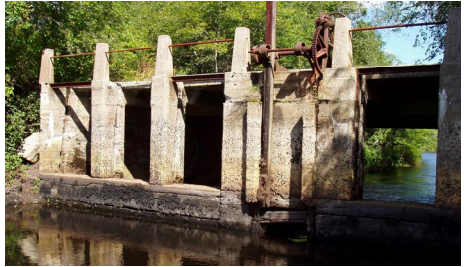 In 2003, the tank barge Bouchard 120 struck a rock outcrop in Buzzards Bay and spilled 98,000 gallons of oil into waters offshore of Massachusetts and Rhode Island, oiling over 100 miles of shoreline. The spill killed or oiled piping plover, roseate tern, loon and many other bird species. It also impacted marshes, fish, and shellfish, and restricted public access to beaches, recreational shellfishing and boating. Two case settlements in 2011 and 2018 secured nearly $20 million to restore natural resources injured by the oil spill.

A portion of the funds are being used to remove the Horseshoe Mill dam, a dilapidated structure at the head-of-tide on the Weweantic River. Not only is the dam a public safety hazard, but it blocks natural sediment transport, tidal exchange, and prevents migratory fish passage. Its removal, beginning in November 2019, will open habitat for fish and encourage the return of native wetland plant communities including rare species. Two canoe launches will also be built, encouraging people to use and enjoy the reconnected river. 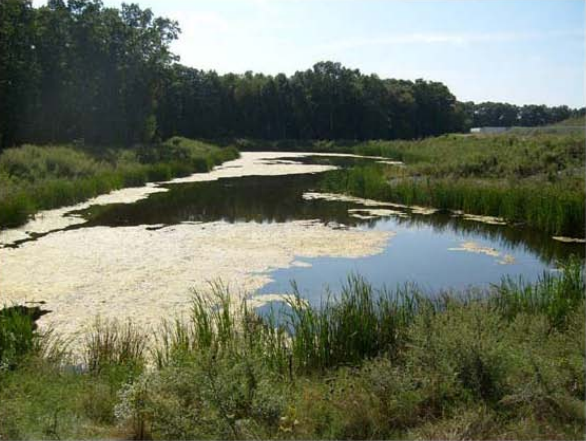 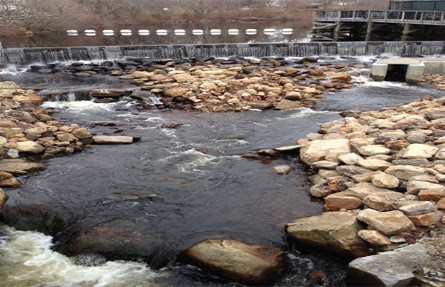 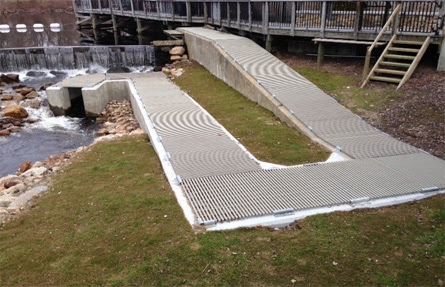 The Rose Hill Landfill was a former abandoned quarry where illicit dumping of household and industrial waste went on for years. The site included 27 acres of solid waste, 15 aces of sewage sludge, and 11 acres of bulk waste. Toxic compounds and metals leached from the site into nearby aquatic habitats including the Saugatucket RIver. The site was declared a Superfund site in 1989, cleaned up, and a $117,000 settlement reached with NOAA in 2002 for injury restoration.

Through the settlement, two fishways were reconstructed at the Palisades Mill Dam and Main Street Dam on the lower Saugatucket River, with construction completed in 2015. The existing fishways, originally built in 1970, functioned very poorly with few fish passing. The fishway improvements, also supplemented by state and other federal funds, allow thousands of river herring and other migratory fish to reach over 300 acres of upstream habitat. This marks a new and healthier chapter for the Saugatucket River and watershed communities. 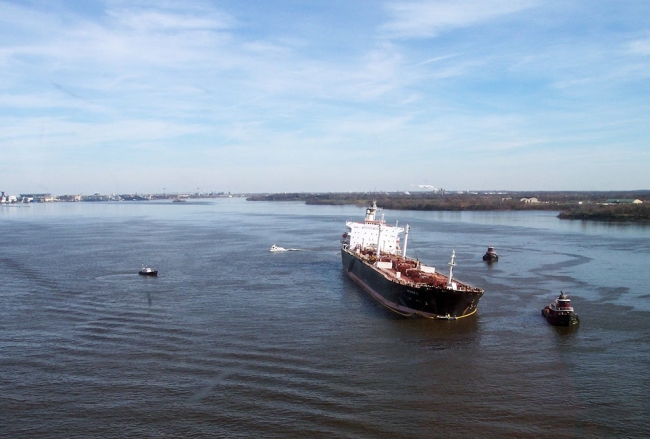 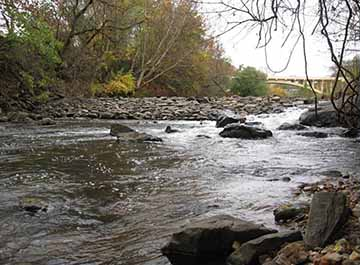 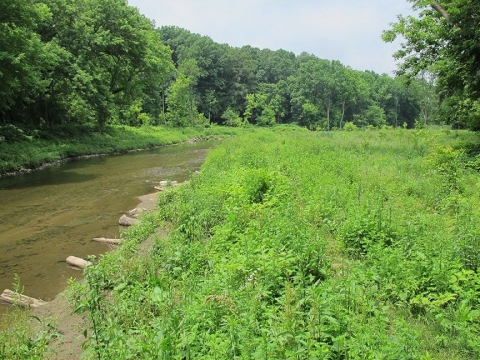 The M/T Athos I oil spill occurred when the oil tanker struck a submerged anchor while the vessel docked at an oil refinery, spilling over 265,000 gallons of crude oil into the Delaware RIver and nearby streams in the fall of 2004. The oil spread 115 miles downriver, oiling 280 miles of shoreline in Pennsylvania, New Jersey, and Delaware. In addition to injuring habitats, fish, and wildlife, the spill affected recreational uses like boating, fishing, and hunting.

A $27.5 million for restoration projects was received from the National Pollution Fund Center in 2010, and among those projects were three dam removals. The Darby Borough Dam, Hoffman Park Dam, and Kent Park Dam were all in disrepair and blocked fish passage along Darby Creek. Their removal in 2013 opened up passage for migratory fish like Ameircan shad, alewife, river herring, and American eel. Today the shoreline is lined with native plants, improving water and habitat quality, which is one of the most visible positive changes for the stream. 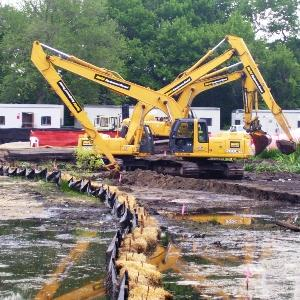 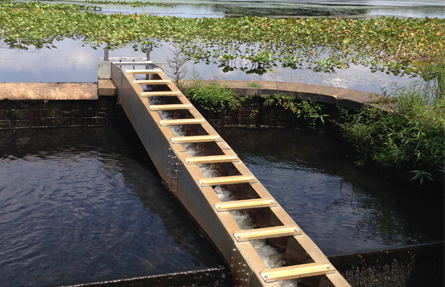 To help restore resources in the creek, a ladder was constructed to allow fish to return to the system. For more than a century, two dams had restricted fish passage between the Massapequa Tidal Channel and Massapequa Lake. The ladder is designed to provide migratory fish like alewife and blueback herring access to approximately 40 acres of freshwater spawning and nursery habitat. In the summer of 2015, six years after the construction of the ladder, large numbers of young alewife were using the ladder to populate Massapequa Lake — proof of successful spawning and rearing of migratory fish due to this restoration project. 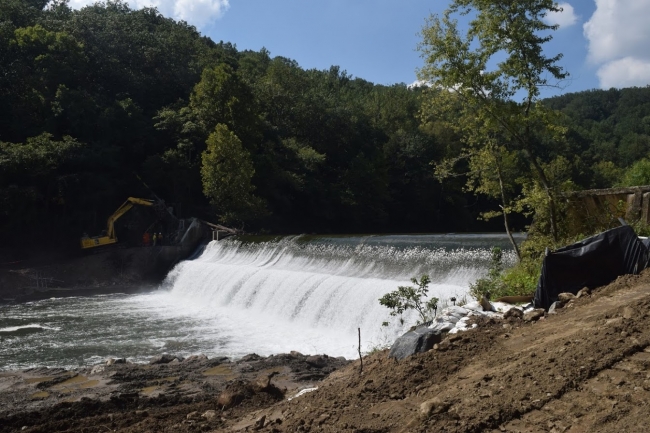 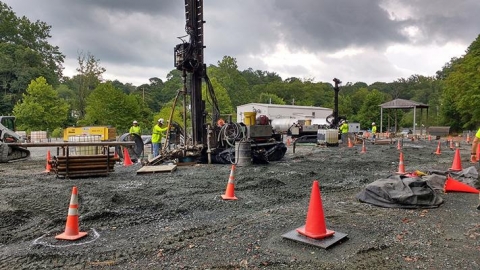 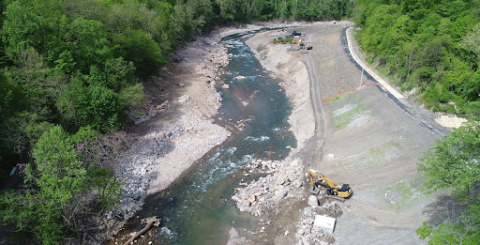 Beginning in 1961, a solvent recycling facility in Maryland released volatile organic compounds into Little Elk Creek, which flows into the Elk River, a tributary to the Chesapeake Bay. Removal of contaminants from the sediment was completed in 1998, and over the years several water treatment systems were installed. NOAA provided technical input to these projects, and determined that the compounds harmed migratory fish, invertebrates, and their habitats. A settlement was reached in 2007 to fund cleanup and provide $455,000 for restoration.

It was determined the on-site Spectron dam could not be removed for several reasons, and no fish passage project was available in the Elk River watershed. Therefore funds were contributed to the removal of the Bloede Dam, a derelict dam on the Patapsco River which was also a safety hazard. Dynamite was detonated in September 2018, and the removal was completed before the end of the year. It opened up 65 miles of habitat for migratory fish that spawn in freshwater like the American shad and alewife, as well as 183 miles for American eel, which migrate to the ocean to spawn. Today the stream is safer for recreators, and is being monitored for returning fish. 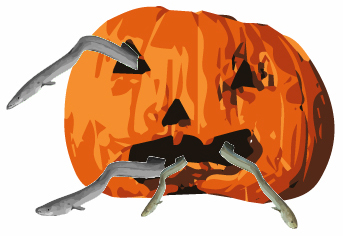 These six spooky stories are just a sample of the work we do.

For over 30 years NOAA’s Damage Assessment, Remediation, and Restoration Program has worked with our co-trustees to hold parties accountable and restore waterways across America.

We are proud to support fish passage projects as one way to bring injured rivers back to life. These projects benefit communities and economies across the country that depend on clean waterways and robust fisheries.

From all of us here at NOAA, Happy Halloween!