Examples of how human societies are changing the planet abound – from building roads and houses, clearing forests for agriculture and digging train tunnels, to shrinking the ozone layer, driving species extinct, changing the climate and acidifying the oceans. Human impacts are everywhere. Our societies have changed Earth so much that it’s impossible to reverse many of these effects. 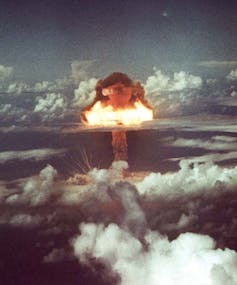 Some researchers believe these changes are so big that they mark the beginning of a new “human age” of Earth history, the Anthropocene epoch. A committee of geologists has now proposed to mark the start of the Anthropocene in the mid-20th century, based on a striking indicator: the widely scattered radioactive dust from nuclear bomb tests in the early 1950s.

But this is not the final word.

Not everyone is sure that today’s industrialized, globalized societies will be around long enough to define a new geological epoch. Perhaps we are just a flash in the pan – an event – rather than a long, enduring epoch.

Others debate the utility of picking a single thin line in Earth’s geological record to mark the start of human impacts in the geological record. Maybe the Anthropocene began at different times in different parts of the world. For example, the first instances of agriculture emerged at different places at different times, and resulted in huge impacts on the environment, through land clearing, habitat losses, extinctions, erosion and carbon emissions, forever changing the global climate. 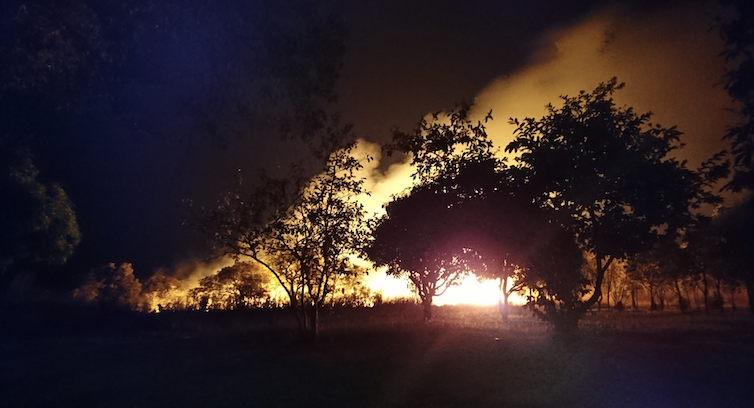 Human practices like burning the landscape – as in this night bush fire outside Kabwe, Zambia – have been affecting the Earth since long before the nuclear era. Andrea Kay, CC BY-SA

If there are multiple beginnings, scientists need to answer more complicated questions – like when did agriculture begin to transform landscapes in different parts of the world? This is a tough question because archaeologists tend to focus their research on a limited number of sites and regions and to prioritize locations where agriculture is believed to have appeared earliest. To date, it has proved nearly impossible for archaeologists to put together a global picture of land use changes throughout time.

To tackle these questions, we pulled together a research collaboration among archaeologists, anthropologists and geographers to survey archaeological knowledge on land use across the planet.

We asked over 1,300 archaeologists from around the world to contribute their knowledge on how ancient people used the land in 146 regions spanning all continents except Antarctica from 10,000 years ago right up to 1850. More than 250 responded, representing the largest expert archaeology crowdsourcing project ever undertaken, though some prior projects have worked with amateur contributions.

Our work has now mapped the current state of archaeological knowledge on land use across the planet, including parts of the world that have rarely been considered in previous studies.

We used a crowdsourcing approach because scholarly publications don’t always include the original data needed to allow global comparisons. Even when these data are shared by archaeologists, they use many different formats from one project to another, making it difficult to combine for large-scale analysis. Our goal from the beginning was to make it easy for anyone to check our work and reuse our data – we’ve put all our research materials online where they can be freely accessed by anyone.

Though our study acquired expert archaeological information from across the planet, data were more available in some regions – including Southwest Asia, Europe, northern China, Australia and North America – than in others. This is probably because more archaeologists have worked in these regions than elsewhere, such as parts of Africa, Southeast Asia and South America.

Animation showing the spread of intensive agriculture across the globe over the past 10,000 years, based on ArchaeoGLOBE Project results. (Nicolas Gauthier, 2019, CC-BY-SA)

Our archaeologists reported that nearly half (42%) of our regions had some form of agriculture by 6,000 years ago, highlighting the prevalence of agricultural economies across the globe. Moreover, these results indicate that the onset of agriculture was earlier and more widespread than suggested in the most common global reconstruction of land-use history, the History Database of the Global Environment. This is important because climate scientists often use this database of past conditions to estimate future climate change; according to our research it may be underestimating land-use-associated climate effects.

Our survey also revealed that hunting and foraging was generally replaced by pastoralism (raising animals such as cows and sheep for food and other resources) and agriculture in most places, though there were exceptions. In a few areas, reversals occurred and agriculture did not simply replace foraging but merged with it and coexisted side by side for some time.

The deep roots of the Anthropocene

Global archaeological data show that human transformation of environments began at different times in different regions and accelerated with the emergence of agriculture. Nevertheless, by 3,000 years ago, most of the planet was already transformed by hunter-gatherers, farmers and pastoralists.

To guide this planet toward a better future, we need to understand how we got here. The message from archaeology is clear. It took thousands of years for the pristine planet of long ago to become the human planet of today.

And there is no way to fully understand this human planet without building on the expertise of archaeologists, anthropologists, sociologists and other human scientists. To build a more robust Earth science in the Anthropocene, the human sciences must play as central a role as the natural sciences do today.

Erle C. Ellis is a member of the American Association of Geographers

Teaser photo credit: People have been modifying Earth – as in these rice terraces near Pokhara, Nepal – for millennia. Erle C. Ellis, CC BY-ND