As the Extinction Rebellion shut down the system in the North, Indigenous women in Argentina staged an uprising of their own. The Native Flower Rebellion, they are calling it: an occupation of “self-convoked” Mapuche, Guaraní, Qom and other Indigenous women have traveled from all corners of the republic to demand an accounting from their government, and to unite in a powerful message: The Terricide must stop. The violence against their people and especially their women must stop. And they will not go away until they are sure they’ve been heard — and that action is being taken to address their specific demands.

After ten days of their occupation of the Ministry of the Interior — the agency they pinpoint as the focal point of much of the racist, violent and environmentally devastating government policy in their territories — on Friday they declared an end to the occupation, satisfied that they had been heard and had made some significant steps forward in their meetings with different agencies.

One of those women, a Mapuche weychafe or traditional guardian, author and land defender named Moira Millan, shared a detailed investigation of the situation in her territory in the south of Argentina, “Mapuche Motherhood in the Age of Benetton,” with Esperanza Project partner publication Intercontinental Cry last year. Now, instead of celebrating the release of her acclaimed first novel, Train of Oblivion, she is petitioning functionaries, leading marches and conducting lectures by bullhorn in the streets of Buenos Aires, together with her sisters from around the republic.

Their statements, sent out to the world on social media, share an understanding of the Earth that our modern civilization is far from grasping. We share here excerpts from their three most important statements, and will share an interview with Moira in the days ahead. 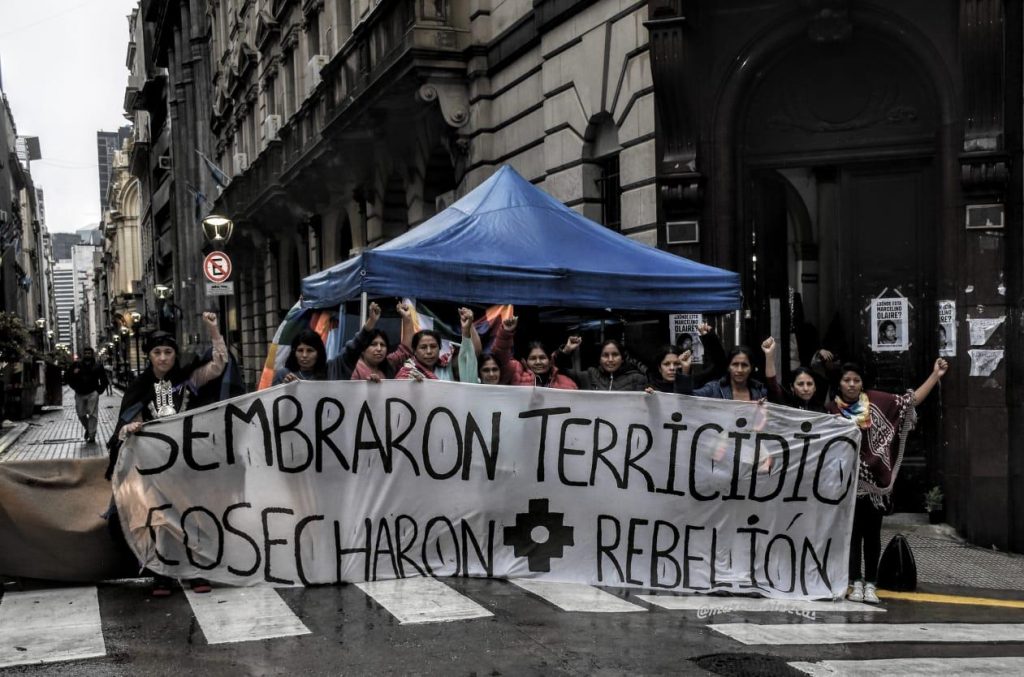 BUENOS AIRES, Argentina — We indigenous women from different territories in conflict, belonging to various indigenous nations of Argentina, come to bring the thought, the word, the proposal, which has emerged from the heart of the Earth that beats beneath our feet. This heart is constituted by the whole spiritual world that sustains life on Earth, which we name in different ways, according to the voices of our peoples, reaffirming the territorial plurinationality that we have always formed. We call ourselves to come because government officials have an obligation to listen to us.

We are givers and guardians of life, and just like when a mother tells her son: enough, stop, we come to say enough to this capitalist, racist and patriarchal system that is putting the life of the planet at risk.

In Argentina today, eight out of ten indigenous women suffer rape, abuse and physical violence. Seven out of ten suffer from police and state security forces. Of every eight women, seven cannot access justice. Five out of eight women who are raped or killed are elders, in most cases spiritual authorities.

Ed. note: Go here for a video documenting these actions.

Through us, speak thousands of years of culture that have built a way of inhabiting the world in relation to reciprocity and amorousness with the Earth. Through us speak our ancestors, who were guardians of that wisdom and who with much pain and sacrifice were able to leave us their knowledge. Through us the Earth speaks, that land with which we are linked in our spirituality, in our way of understanding life. Honoring the ground we step on, honoring the fruit of the land that feeds us. Honoring the different ways of life, we come with determination, with courage and dignity to say: Enough.We accuse the governments and companies that are killing our territories of terricide. We call terricide the murder not only of the tangible ecosystems and the peoples that inhabit it, but also the murder of all the forces that regulate life on Earth, what we call a perceptible ecosystem. Those spirits are responsible for life to continue on the face of the Earth and they are being destroyed along with their habitat. There will be no possibility to repair and restore these ecosystems, no matter how much you can reforest or create green spaces, the force that inhabited those areas will be gone forever. We are in time to avoid that. 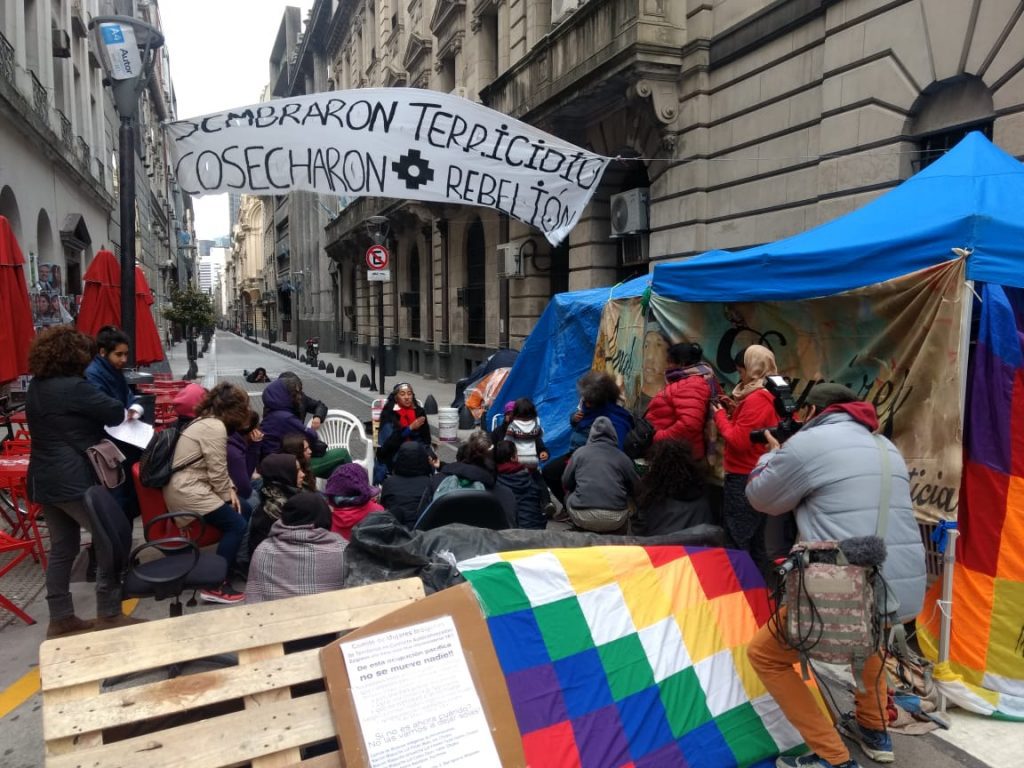 “The social emergent today is the Earth, and we are spokeswomen for her pain.”

Terricide also destroys entire villages that are the guardians of a way of understanding the art of inhabiting, which is necessary to be able to place the matrix of a new civilization. When they are eliminated, when indigenous peoples are killed, the opportunity to build a new model of society is also being killed. Each of us indigenous peoples not only have theories, we have the practices of reciprocal societies with nature that sustain life as the main value.

At this moment in the world, voices are crying out against climate change, demanding that governments put on the brakes, voices that are coming from Europe and can count on all the reflectors and amplifiers in the media. However, racist global policy makes the voices of indigenous peoples inaudible and invisible, and our deaths are made to be socially meaningless.

We indigenous women are the bodies that suffer most from these atrocities.

To our men we say: Wake up! Our anti-patriarchal struggle is an anticolonial struggle. Check your behaviors that are permeated by this colonizing, slave, western mentality that has put us in a place of submission, humiliation and abuse.

In the past we were always complementary duality united from reciprocity and amorousness between beings. We want to recover this wisdom that inhabits us. In many of our communities there is no water, to wash clothes we have to walk 3 or 4 kilometers; cooking food for our family has become an almost impossible mission, dammed rivers, contaminated, devastated forests, murdered forests.

We denounce State terrorism since we suffer arbitrary detentions and raids every day; disappearances and torture; evictions to our communities that are a violation of our rights and laws that protect us. Prior informed consultation is not respected. We also denounce the militarization of the territories.

It is up to us historically to sustain and save the lives of our families, which is why the cruelty against indigenous women is greater. 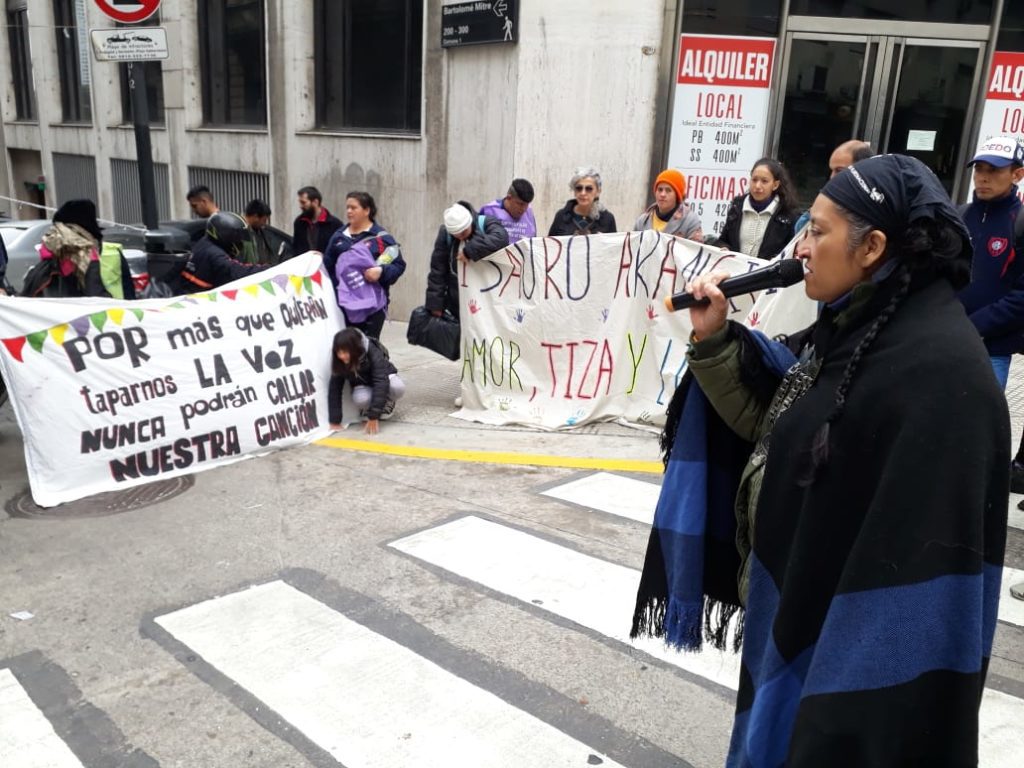 Mapuche weychafe, activist and author Moira Millan gives a talk in the street in front of the Interior Ministry. Photo: Movement of Indigenous Women for Good Living

BUENOS AIRES, ARGENTINA — We want to communicate to the whole society, to the political class and to the peoples of the world that we, the indigenous women of the territories in conflict, find ourselves strengthened and certain of this political and historical action that we are carrying forward despite the difficulty being here. The peaceful occupation will continue indefinitely.

We have clear ideas and we know what we came for; we are telling a country that life is not negotiable, that there can be no social pact if the genocide on the peoples and on the territories continues. We came to defend life, we came with complaints that are historical as well as others regarding events that have occurred in recent years.

Yesterday morning, we had a meeting with Dr. María Fernández Rodríguez, Secretary of Justice. The meeting was positive; we were able to be heard, and we raised three specific cases: the case of the disappearance of Marcelino Olaire (disappeared since 8-11-2016); the case of Ismael Ramírez, 13, killed by the police of Saenz Peña, Chaco; and we raised the situation of our sister Maria Mendoza and the harassment she and her community suffer. Her son is unjustly imprisoned after being brutally beaten by the Formosa police. 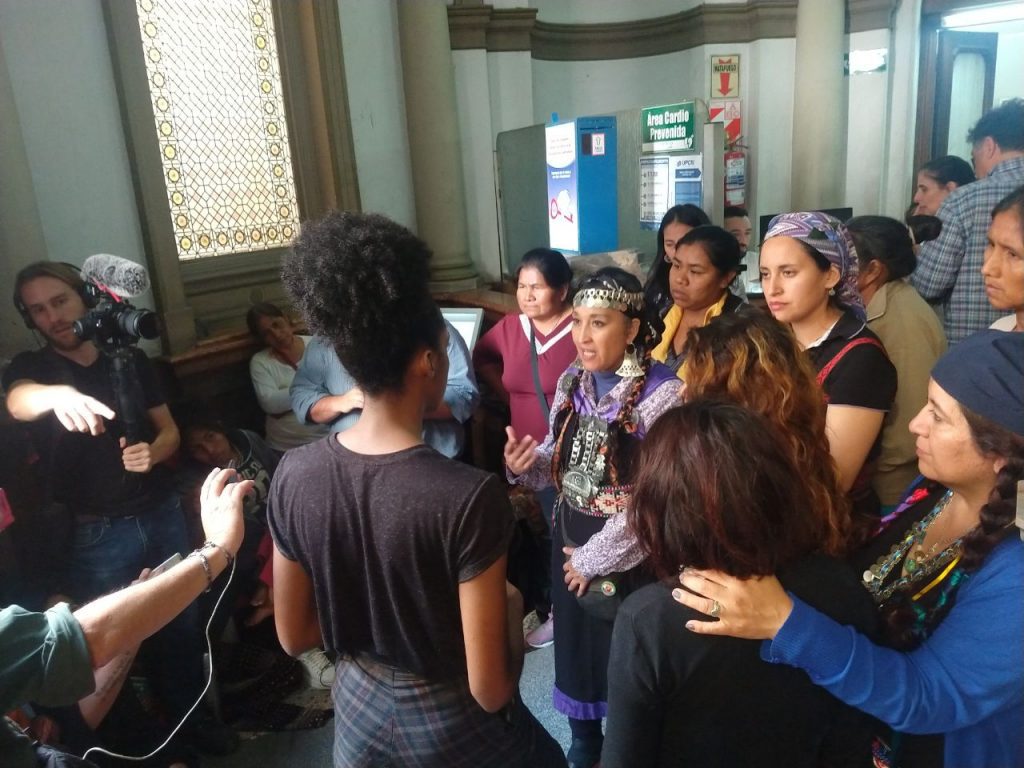 We also denounce what is called “chineo,” naturalizing the rape of our girls. These cases were taken to the Ministry of Justice, which pledged to follow up on these causes that had been shelved.

We have no guarantee that this will happen, which is why we cannot leave; there is no time, we cannot wait for the government to change, because we are being killed today.

Since we’re not on the agenda of politicians we want to be on the agenda of your hearts. Know that everything they do to us, they are doing to the mountains, the rivers, the forests, the hills.

We appeal to the good hearts and to committed people, friends, activists, media, social organizations and groups, that we need you all.

If not now, when?

Tonight will be the last night of peaceful occupation. Today there were some meetings that yielded solid results, especially on very specific and urgent issues. We believe that our demands were recorded, and they are in the process of working to have prompt solutions.

Today we meet with Minister (Sergio) Bergman’s advisor, Nahuel Muñoz (Ministry of the Environment). They promised to cover the wells near the city of San Ignacio, Misiones, which are very dangerous for the children who live in the Mbya Guaraní community there. They said that next week, theoretically, there would have to be strong responses and drinking water for that community, which is drinking contaminated water right now. They also pledged to assist other nearby communities with water. Of course, they will not declare a water emergency. It seems to us that the rest of the demands imply a change so structural that we must continue walking and working so that all these problems that we have come to denounce are resolved. We will do so as long as necessary.

Tomorrow we close this struggle of almost eleven days of active resistance and peaceful occupation that we call The Rebellion of Native Flowers, in which we not only wanted to solve urgent issues, but also place the agenda of the indigenous peoples in social consciousness and the agenda of the Earth, of what we call #Terricide. We have felt very accompanied by many people individually, especially young people who are questioning the current development model and the system, and came to join their efforts, their hearts and their spirits with us…. Above all, we are grateful to be walking with brave sisters who after centuries of oppression and silencing begin to empower their voices and begin to demand their rights. We conclude the tenth day feeling victorious, at least in this first part of the fight we have walked. We will launch a campaign there for a #Plurinational event on May 1, 2020, and we will call an encampment against climate change in February 2020 at the Lof Mapuche Pillan Mahuiza community. We will not cease in our fight against terricide.

Moira Millan statement during the occupation. Social media video/Committee of Self-Convoked Indigenous Women of the Contested Territories of Argentina.

Teaser photo credit: “They sowed Terricide; they harvested rebellion.” Moira Millan and Nely Curia, two of the “self-convoked Indigenous women” of Argentina who have occupied the Ministry of the Interior for nine days. Photo: Movement of Indigenous Women for Good Living