Life in Achuar territory starts before the day’s first sunlight, when the early morning darkness is interrupted by flashlights that appear and disappear like fireflies. In the Achuar community of Puerto Rubina, the daily consumption of wayusa tea starts at 4am and goes until 5:30am, when the last of the men take their final heaves to cleanse their stomachs and garner energy for the day. A thousand kilometers from the country’s capital of Lima, life follows its course without pressure from anyone.

The Achuar community of Puerto Rubina is hosting the second annual assembly of the Federation of the Achuar Nationality of Peru (FENAP). There is a clear agenda at the assembly: territorial defense, respect for self-determination and to agree on proposals they have as an indigenous people. On this occasion, a little over 300 people attended the assembly from the federation’s 45 communities.

As the hours passed, the concern increased for every adult, adolescent, and child who is conscious of what might happen to their lives if the oil company, GeoPark Ltd, gains access to their Achuar territory. Their faces reflected not only their concern but also their hope for coming together as a people alongside a number of allies – the Autonomous Territorial Government of the Wampis People; international groups like Rainforest Foundation Norway, and Amazon Watch; as well as Peruvian organizations like Equidad Peru and the International Institute for Law and Society.

The goal of these alliances is to defend Achuar territory and their lives as forest peoples. The coalition helps serve as a protective barrier against GeoPark’s constant public announcements about their imminent exploitation of Block 64, an area of land that covers much of the Achuar’s rainforests. 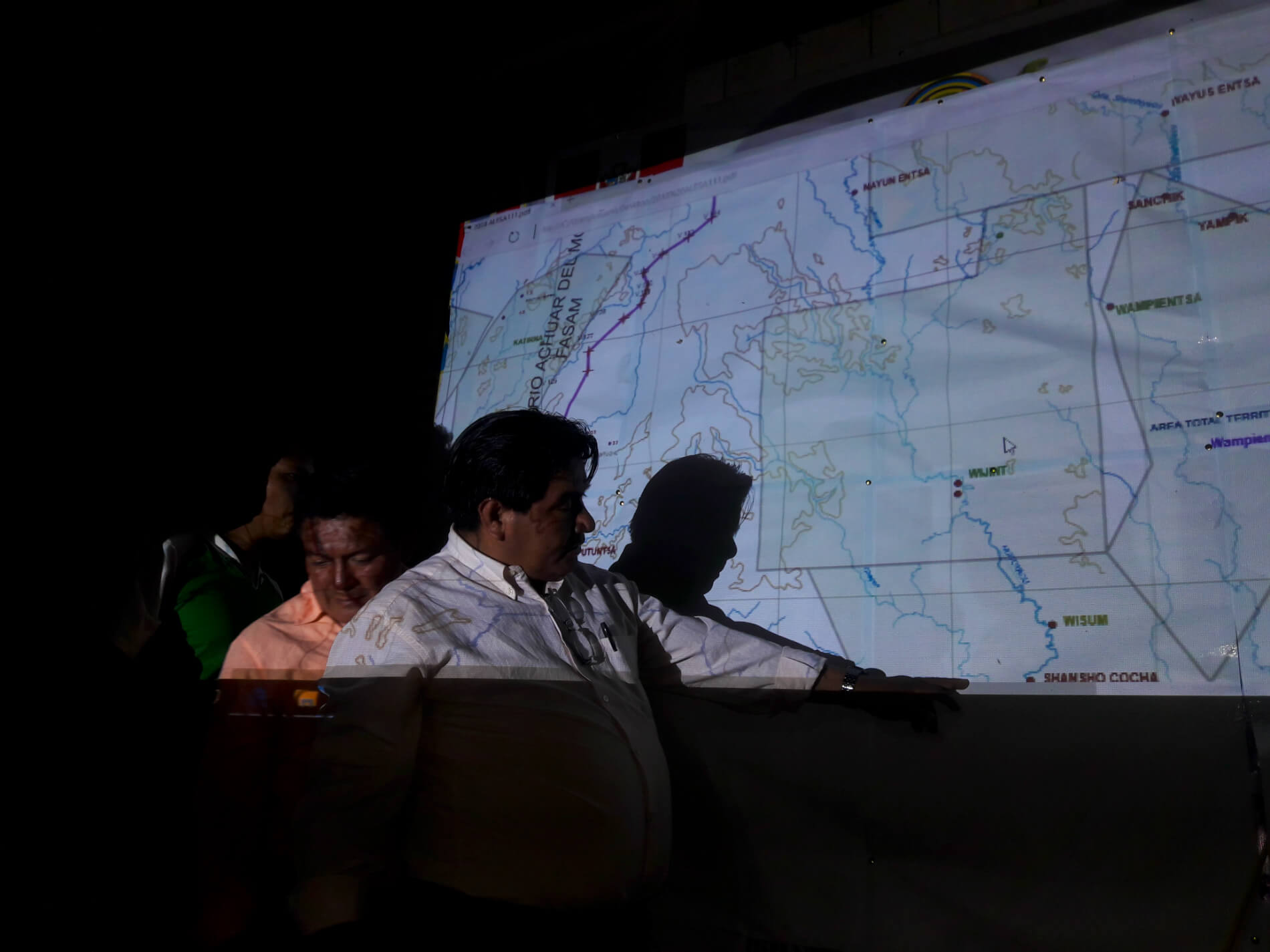 Presentation to the Achuar assembly about their legal claim for their ancestral territory of close to 2 million acres. Photo: Segundo Chuquipiondo

During the first quarter of 2019, GeoPark Ltd, with existing operations in Colombia, Argentina, Brazil, Chile and Peru, offered to invest some $200 million in Block 64, specifically for the Situche Central project. The proposed oil platform is close to the community of Putuntsa and would affect the tributaries of the Morona and Pastaza Rivers–that is to say, the Huasaga, Manchari, and Huitoyacu Rivers–on which many indigenous communities depend for fishing and the daily collection of water for cooking.

Putuntsa is an Achuar community made up of eight families, located in the province of Datem de Marañon in the region of Loreto. “Starting around 2005, the oil company Talisman tried to enter this zone but the mobilization of communities around Situche impeded them. Now GeoPark is trying the same, and that’s why I came to the assembly to ask everyone to help protect us,” commented Shiwiant Majian Pusut, president of one of FENAP’s base organizations, called The Indigenous Association of Morona (AIM).

Additionally, Shiwiant said that very close to the Situche Central location, there is an old oil well that contaminated an area 50 meters wide and 100 meters long, that has yet to be cleaned up. It serves as a watering hole for local animals. His face – sweaty from the exaggerated heat of the jungle – revealed deep concern.

“They are using the same strategies as the oil companies that tried to come into our territory. They are dividing us between the Achuar of the Pastaza basin and the Achuar of the Morona basin, who are very close to the area where GeoPark wants to operate. They have divided us between those who are in favor and those who are opposed. They’ve even said that the Peruvian Army is going to come in to evict the Achuar of the Pastaza. Please, we’re asking everyone to see our situation and to help us. We just want to live and oil is death,” Shiwiant added. 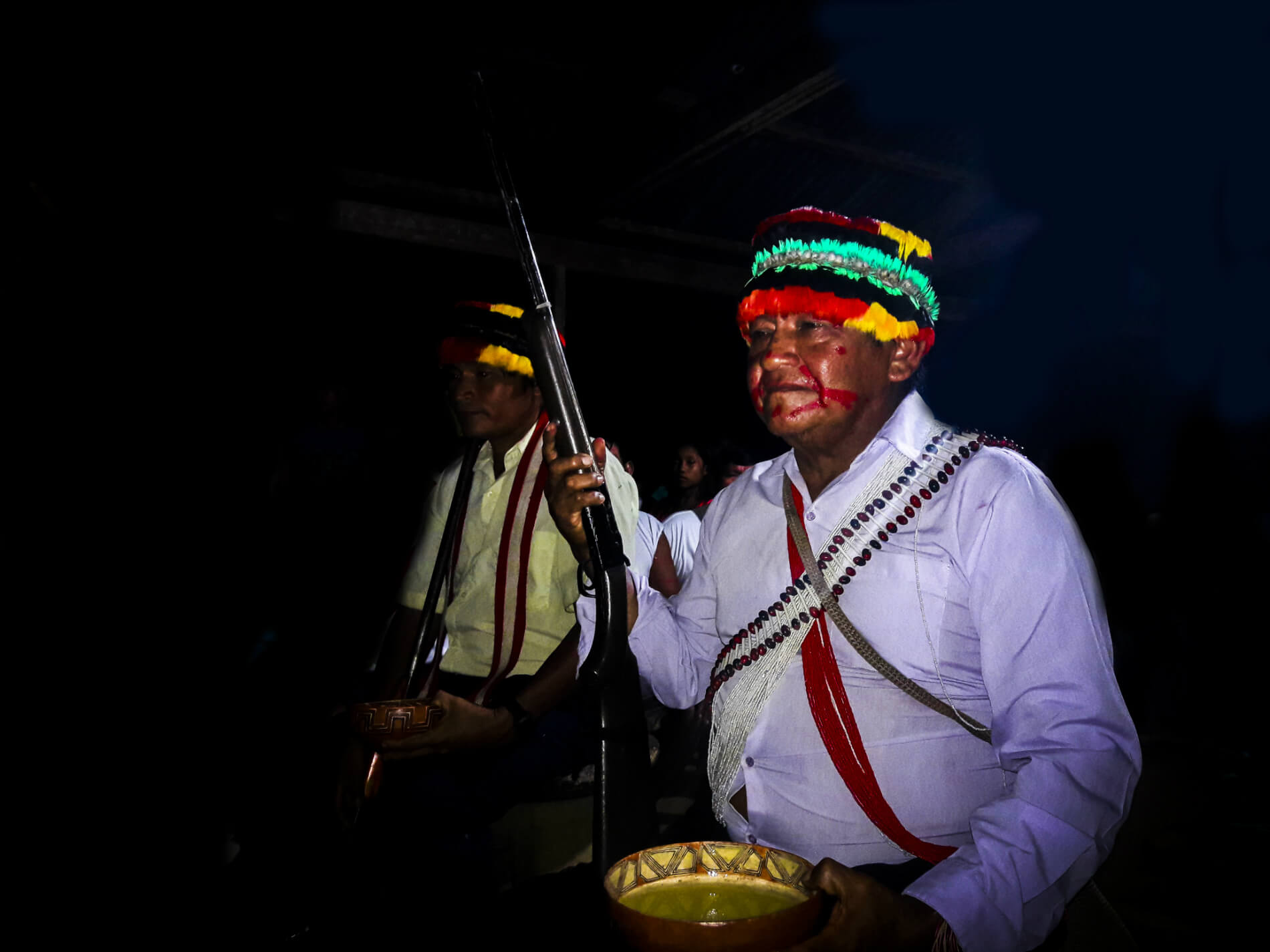 On one hand, GeoPark is trying to rapidly advance the bureaucratic processes at local, regional, and national levels in order to begin operations as soon as possible. They have presented their environmental impact study (EIS) to the National Service for Environmental Certification (SENACE) which is now in the evaluation phase.

Former-FENAP President Jeremías Petsein approached it from another angle. At the Puerto Rubina gathering, he asked,  “[How can] we can offer a social license to a request that doesn’t respect our rights and the principle of free, prior, and informed consultation given that we are within the project’s area of influence.”

OIL BRINGS DEATH. HOW ARE WE SUPPOSED TO LIVE LIKE THIS?

For over 42 years now, the Northern Peruvian Oil Pipeline has continuously transported oil from the Amazon to the Peruvian coast. Following 2016 oil spills in Mayuriaga and Morona, the Office of Environmental Evaluation and Accountability (OEFA) determined that the pipeline was corroded due to age and that contingency measures were necessary if oil exploitation was to continue. Three years later and there are no official declarations on the topic or the political will to replace the pipeline in order to guarantee the lives of the communities found within the affected area.

Though the day is done and the sun has gone down, the Achuar meeting continues. For the Achuar peoples, there are many reasons they don’t want oil activity within what they refer to as their ancestral territory.

An Achuar mother, named Rosa Yampis, respectfully asks to say a few words. She lets out a deep breath to bring forth what is held at the bottom of her heart. She explains, “I have personally seen what the oil companies do in the community of Pampa Hermosa. I’ve seen animals dying. The fish have another taste. And when we swim in the contaminated rivers, our skin feels itchy and we want to vomit. Oil brings death. How are we supposed to live like this?” she asked as she struggled to hold back tears. 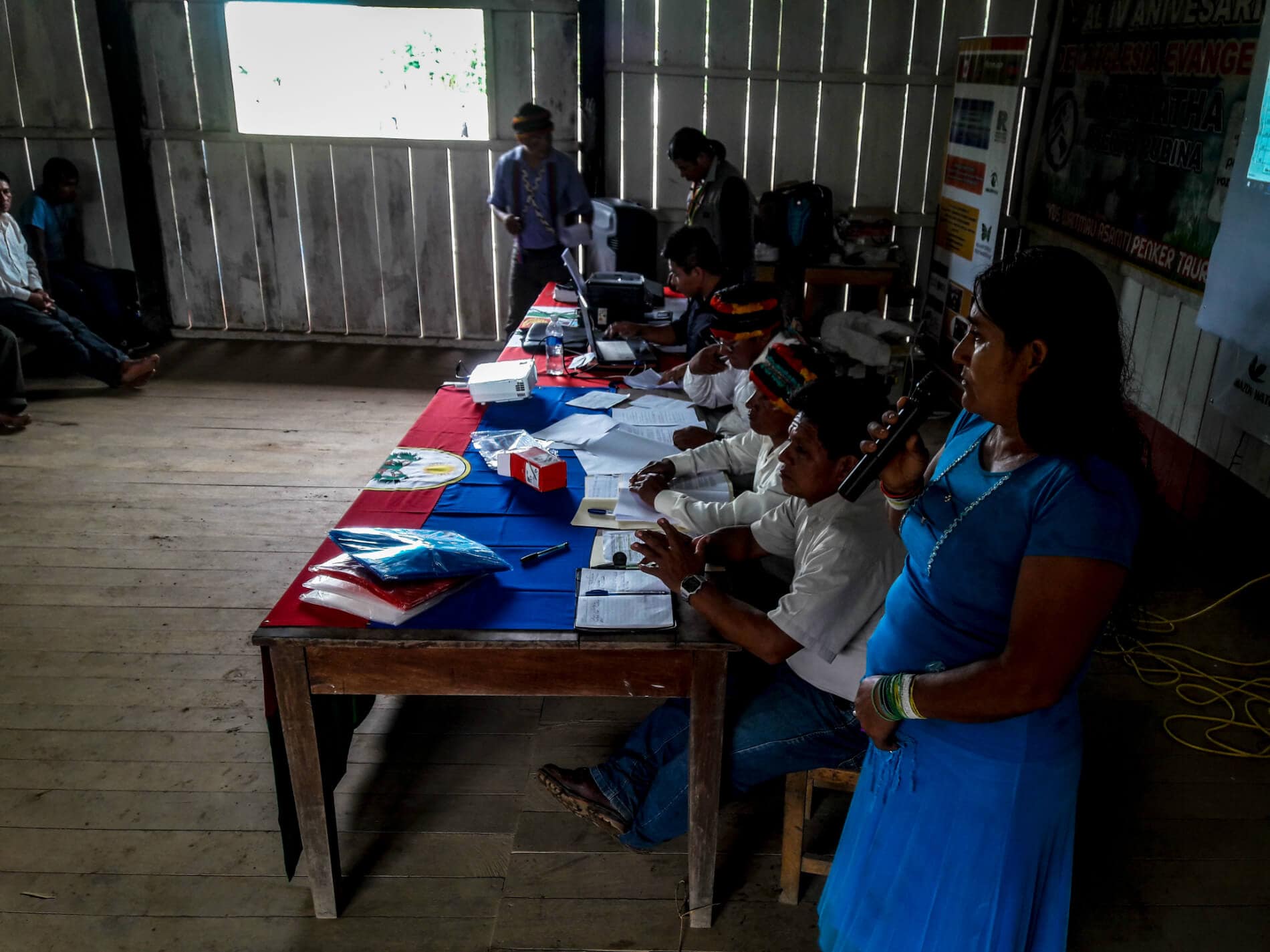 Given the situations lived by neighboring communities in the Loreto region, the Achuar communities under FENAP have initiated a strategy called “strategic litigation”, the idea of which is to unify their 45 communities behind a legal process for their rights. They are demanding legal recognition of the Achuar Peoples of the Pastaza basin (as an indigenous nation, rather than as a collection of individual communities), legal title to their ancestral territory with ownership of the forests (the government has only titled 17 of their communities over the last four decades), and the nullification of oil blocks established without prior consultation, like Block 64.

Since 2014, with legal assistance from the International Institute for Law and Society, the Achuar have taken a number of legal steps toward their demands. So far, they have been successful on one front, with the Regional Government of Loreto issuing a collective recognition of the Achuar Peoples of the Pastaza on June 25th, 2018.

The key idea is – through a legal process – the Achuar are able to influence policies (with regional and national decision makers) that guarantee respect for their indigenous rights, as outlined by international norms and accepted by national Peruvian legislation.

From an early hour, the assembly participants circle up in the communal meeting house to drink masato (a traditional drink made of fermented yuca) which by tradition is offered in a particular manner: the Achuar women serve up large portions of masato in ceramic bowls, then fan out around the group of meeting participants who each drink a little and give the bowl back.  The edges are then wiped off and the bowl is given to the next person, until everyone has had some. Thereafter everyone heads to the meeting which runs until the early evening. 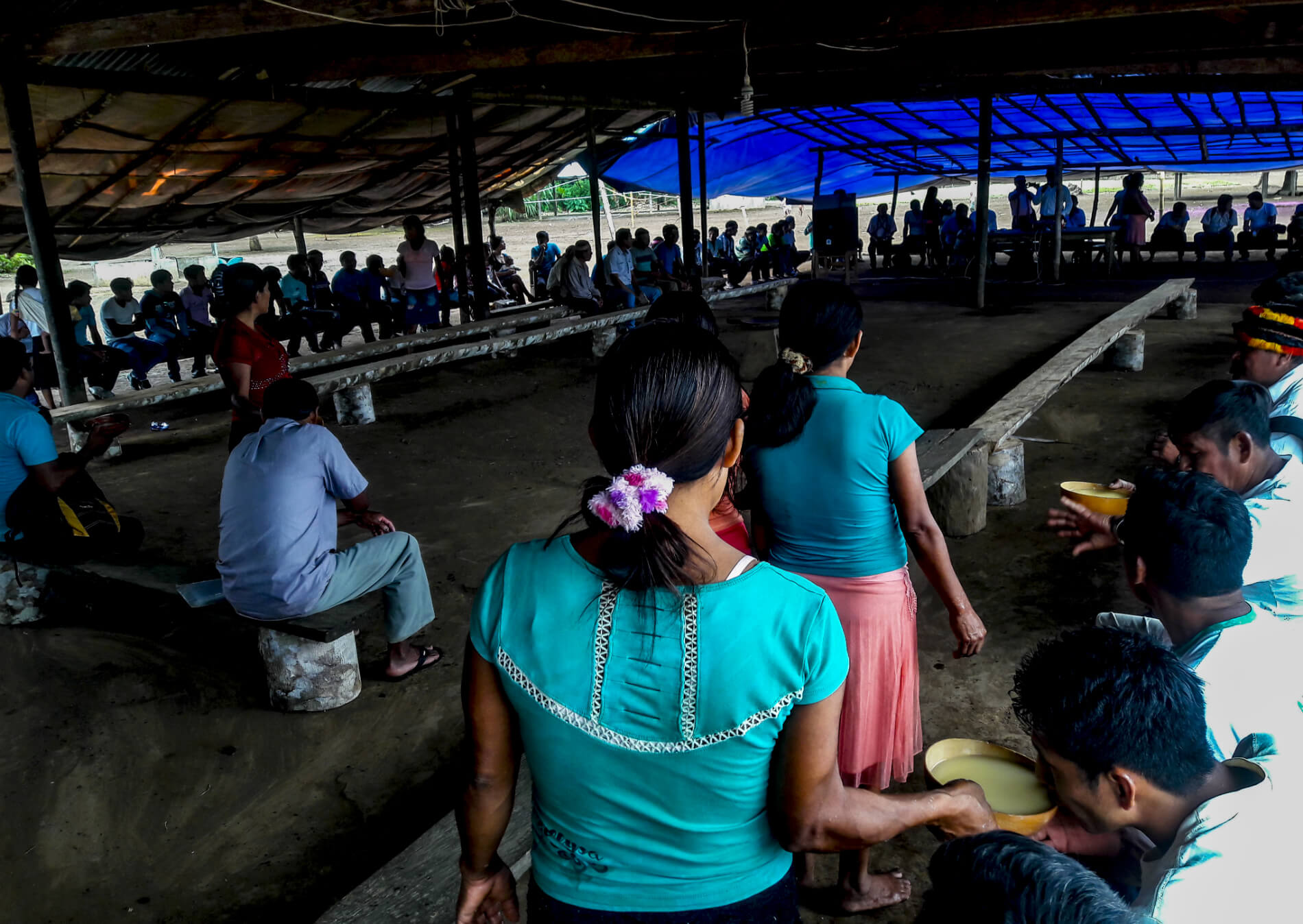 The Achuar assembly – which is the Achuar’s highest collective decision-making body – continues. From their experience, the Achuar leaders estimate a week’s time is needed to come to their agreements without being pressured by time.

Community leader José Yampis Chumpi, president of one of the three base organizations (the organization Achuariti Takat Iruntramu – ATI) which makes up the Federation of the Achuar Nation of Peru (FENAP), comments on their history:

“We have always been in the struggle, in resistance and in unity because that’s what our ancestors insisted on, and that’s what I’ll insist on with my children and the students at the school where I teach. This is not the first time a company has tried to come into our territories – coming in with trickery – but the response has always been the same over four decades: we don’t want oil.” The leader looks up at the sky, which helps him remember, and continues, “Our organization was created in 1985. Ten years later, the companies started to come like Arco and others that attempted to gain our confidence in order to enter. We didn’t let them. Our ancestors left us the message that the life of our people comes before oil. This is our mission here!” 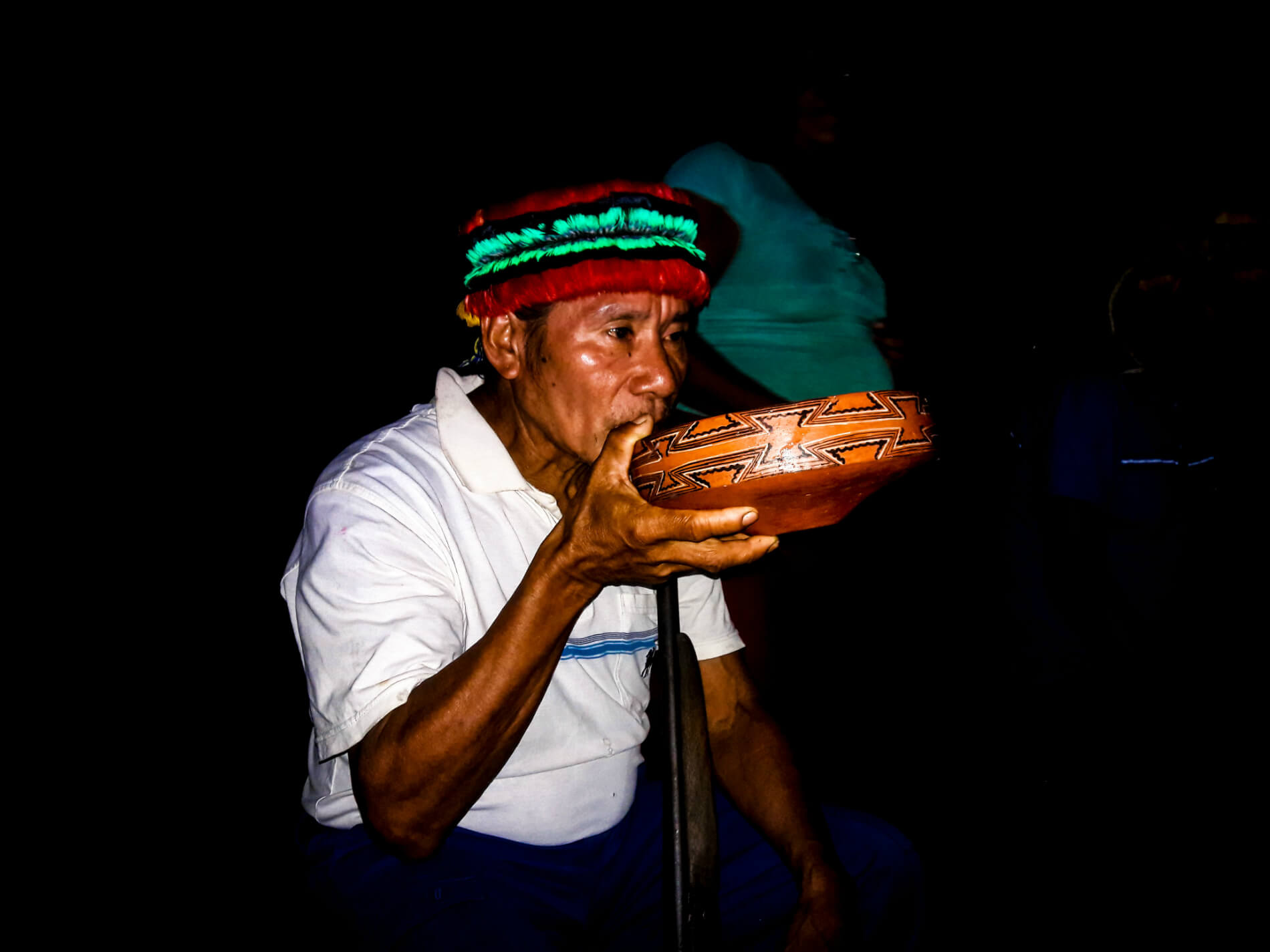 This permanent struggle has had important achievements like the successful ejection of five oil companies from Achuar territory, the Regional Government of Loreto’s recognition of the Achuar as a people, and the recognition of this emblematic case by the office of Peruvian Congresswoman Tania Pariona.

Achiote (a natural red dye) adorns the faces of the Achuar participants. The crown which distinguishes them from other indigenous peoples is made of tucan feathers, showing off bright red, yellow, and sometimes turquoise colors. Their appearance as warriors is striking, though in this assembly spears and shotguns – which they use regularly for hunting – are not allowed. “A journalist is joining us, elsewhere they might not understand why we are like this,” explains one of the assembly goers who offers to interpret the conversations, given that the meeting is carried out in Achuar language. The heat begins to hug the children and adults, at mid-day they take a short break to drink more masato.

Raquel Irigoyen, director of the International Institute for Law and Society (IIDS, in their Spanish acronym), also in attendance at the assembly, explains the strategy to seek legal personhood as an Indigenous peoples. “We imagine that the company or any person who attempts to enter the territory of the Achuar People[s] would be obligated to ask for permission to do so. It would also offer access for the Achuar People to be an active participant in decisions taken by companies or the Peruvian State in territory. In this way, it would help manifest the sovereignty and indigenous governance based on the rights you deserve,” she says.

In Peru, organized civil society has shown itself to be more vigilant given the possible approval of the new Hydrocarbons Law #26221, which in principle would offer oil concessions for 80 years and permit fracking, which requires large extensions of territory for branching infrastructure. To date, the law hasn’t been approved. It was questioned and sent back to the Congressional Mining and Energy Commission.

It may not matter, if history sets any precedent. In mid-2018, the Fourth Constitutional Court of Lima declared the nullification of exploration and production contracts in Block 116, found in the Amazonas Region. This decision was reached after the court found that the Ministry of Energy and Mines in conjunction with the national oil company PetroPeru had not complied with the proper prior consultation process, much less received the consent of the native communities of that region.

After half a century of oil extraction in the region of Loreto – which now comes with constant spills of crude oil from a deteriorating pipeline, and extreme levels of poverty faced by the communities from which the oil is extracted, the stage seems set for Block 64 to suffer the same legal fate—especially if the Achuar have anything to say about it.

May 2019: Following our visit to Achuar territory, GeoPark’s plans were set back by roughly 6 months after the Achuar challenged the company’s environmental impact study (EIS) though a series of documented objections, to which GeoPark has been forced to respond. The EIS process is now back with Peru’s National Service for Environmental Certification, which has 150 working days to consult with various ministries and finalize their approval or rejection of the study. Regardless of the ultimate outcome, the Achuar will continue to vociferously defend their territory though all nonviolent means at their disposal.