On Thursday we launched Scotland’s Degrowth Commission at the venerable Pearce Institute in Govan.

With a delicious irony and timing that can’t be ignored, that very day saw New Zealand’s Prime Minister Jacinda Ardern put out a national budget where spending is dictated by what best encourages the “well-being” of citizens, rather than focussing on traditional bottom-line measures like productivity and economic growth.

As George MacLeod used to say “if you think that’s a coincidence, you’re not paying attention”.

The fact that Andrew Wilson’s Growth Commission drew heavily on the old New Zealand model, that is now being abandoned was not lost to participants at the event.

“New Zealand looked to a market-based model of growth. The result was low government debt and investment, but high personal debt as a consequence. The result is a country denied the infrastructure it needs, poorer government services than are required to meet the needs of all and a potentially fragile banking system if there were to be any financial crisis.”

Degrowth is a challenging idea that goes against the grain of everything we’ve been led to believe; that we could and should produce more, buy more, consume more relentlessly, and that such activity creates wealth. Supporters of the growth model (previously everyone) have suggested somewhat miraculously that this idea is also compatible with “sustainability”.

In light of the IPCC climate realities this seems at best implausible.

In simple terms, growth is incompatible with our survival.

As Tim Jackson, Juliet Schor and Peter Victor write in Degrowth: A Vocabulary for a New Era: “The foundational theses of degrowth are that growth is uneconomic and unjust, that it is ecologically unsustainable and that it will never be enough.”

Wikipedia tells us that the contemporary degrowth movement can trace its roots back to the anti-industrialist trends of the 19th century, developed in Great Britain by John Ruskin, William Morris and the Arts and Crafts movement (1819–1900), in the United States by Henry David Thoreau(1817–1862), and in Russia by Leo Tolstoy (1828–1910). 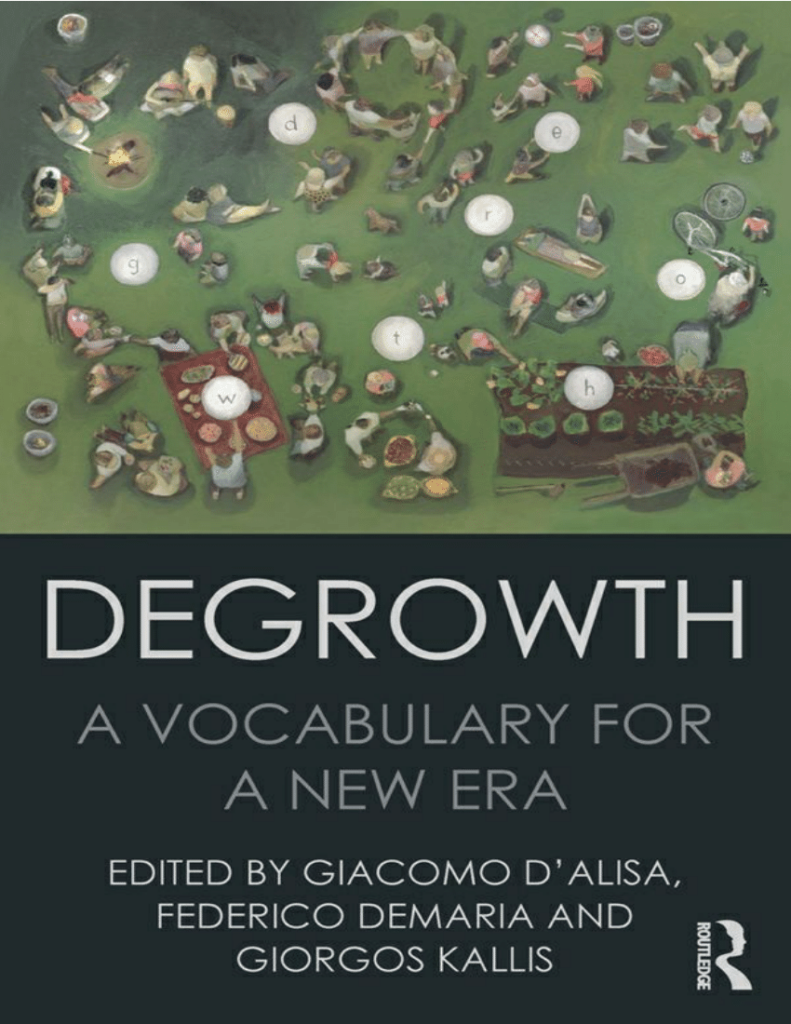 The concept of “degrowth” proper appeared during the 1970s, proposed by André Gorz (1972) and intellectuals such as Nicholas Georgescu-Roegen, Jean Baudrillard, Edward Goldsmith and Ivan Illich, whose ideas reflect those of earlier thinkers, such as the economist E. J. Mishan, the industrial historian Tom Rolt, and the radical socialist Tony Turner. The writings of Mahatma Gandhi and J. C. Kumarappa also contain similar philosophies, particularly regarding his support of voluntary simplicity.

Other advocates are Serge Latouche and Cornelius Castoriadis.

So far so far-out, but now degrowth, once the preserve of anarchists and iconoclasts has entered the mainstream by virtue of the pressing matter of mass-extinction.

1. Growing the economy means growing energy demand. This makes the task of transitioning to renewable energy much more difficult. In fact, the IPCC indicates it is not feasible to transition fast enough to stay under 2C while continuing to grow the economy at normal rates.

2. Even if we *could* transition fast enough, if we keep growing the economy we will need to keep growing clean energy too: ever-more panels, turbines, batteries. This will require enormous material extraction, which has ecological and social impact, particularly in the South.

3. The ecological crisis is not just about emissions. It’s also about deforestation, soil depletion, ocean dead zones, and mass extinction. Clean energy alone will not reverse these trends. A clean-powered economy obsessed with growth will keep chewing through our living planet.

Degrowth is a framework for understanding the way forwards in the era of a new climate reality which we are only beginning to understand the consequences of. The protest of Extinction Rebellion is good and vital, but we also need to repair, re-invent and restructure our politics.

What is the Degrowth Commission?

The Degrowth Commission invites you to re-imagine how our economy should work in a survivable zero-carbon future.

It is part of  Enough! which is a new experimental project responding to the climate crisis.

We will be hosting large-scale participatory events to develop these ideas, commissioning research about what this will mean in our lives and in different sectors of our society and looking forward to a world where we buy less, consume less and stop the process of accumulation and extraction that have destablilised our natural world.

Many people will find these ideas difficult and challenging: “Every society clings to a myth by which it lives,” Tim Jackson wrote in 2004, and “ours is the myth of economic growth.” Why was the Blackout Used to Attack Renewables? Because Some Media Still Have an Anti-Climate Action Agenda