The land-sparing argument is mostly flawed when it promises to save land for wildlife or for carbon sequestration. Continued intensification of the food system will lead to increased pressure on nature as well as the continued erosion of food culture. A regenerative food system and landscapes with multiple  uses are both means and ends by themselves. 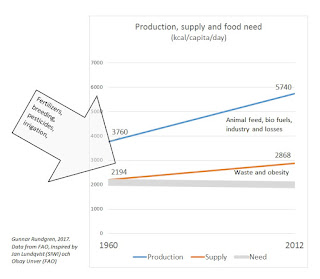 Since 1960 the global population has more than doubled, but the total production of crop farming increased three and a half times, measured in calories. Meanwhile, agriculture area increased with less than ten percent and grasslands even less (grasslands are now shrinking quite rapidly according to FAOSTAT). The increase of production has been driven by irrigation, multiple cropping and the green revolution technology packet of artificial fertilizers, pesticides and new varieties. By far, the most spectacular development in farming is not yield per area unit however, but the increased productivity of farm labor. Instead of catering for the need of the family and a smaller surplus extracted by lords of various sorts, a farmer or farm worker today often produce food for hundreds of people. If we look at staple foods in the most mechanized farm regions, one worker may actually “feed” a thousand persons

Through this extraordinary increase in land and labor productivity, cost of grains, oilseeds and soybeans have plummeted while production has quadrupled. The net effect is a great increase in food energy available to humans. In addition, the rapidly increasing use of crops as animal feed and biofuel feed stock have swallowed an even larger share. Meanwhile, the continued intensification of farming is the root cause of the huge environmental impact from the food system, the destruction of habitats, the broken cycles of nutrients such as nitrogen and phosphorus and the huge effect on the climate.

Some (such as the Breakthrough Institute) are using the land use efficiency argument to promote a continuation of the increased intensification of farming. By doing so we could spare land to “wild nature”. Lately, some researcher concluded that organic farming was much worse for the climate than conventional. Again, land use was the key argument. In his view all land has an alternative use for natural carbon sequestration, which means that land that has a low yield will be very damaging for the climate.

Undoubtedly, humans are outcrowding other species at an alarming pace. Superficially, the land-sparing argument has some appeal. However, there is very limited evidence, if any, that intensification of land use actually saves land, neither locally nor globally. Some marginal agriculture lands have been converted to conservation purpose (such as in the US Conservation Reserve Program), but as long as land is productive enough it will be used for commercial purposes, be it for animal feed, biofuel or industrial feedstock or forest monocultures (a common fate of abandoned agriculture land).

In addition, humans demand land for many other things than farming and farm land will often be used for highways, electric grid, hydro dams, lawns, golf courses, malls, urban sprawl, logistic centers, mines or oil wells. So even if our modern civilization limits its use of land for agricultural purposes, the whole system of which it is part is constantly putting a bigger share of land into our direct use.

To allocate land uniquely for carbon sequestration means that we will just increase our demand on the rest of nature, and give us yet another excuse not to tackle the root cause of our predicament, the burning of fossil fuels and the constantly increasing consumption of natural resources, living or dead. Maximized carbon sequestration within the industrial paradigm will most likely mean that even more ecosystems will be devastated and reduced to productive factors.

Food and farming are examples of Jevon’s paradox; increased efficiency leads to more consumption, not less. It has provided the masses with more calories and a huge increase in consumption of luxury foods such as meat, exotic fruits and soft vegetables. Global chicken consumption increased 13 times between 1960 and 2017, and chicken is now the most consumed meat in the world. Access to cheap staple feeds and the successful industrialization of chicken breeding combined with its short life span – perfect for quarterly capitalism – were key factors for success. The author surveyed the cost of various protein sources in the Swedish retailers and came to the conclusion that the only source of protein that could compete with chicken in price per gram of protein were dried beans. Cheap food has also caused increasing waste and waists.

The intensification is part and parcel of a globalized and homogenized food system and the transformation of whole landscapes into uniform production of soybeans, wheat, asparagus, corn or palmoil. It is the cause of a tremendous loss of local food culture, meaning biodiversity and nutrient cycling. It also has devastating effects on rural landscapes which no longer are places to live, love and die for and in, but just commodity deserts.

Of course, if we really want to be “efficient”, we can easily feed 10 billion people on a diet of monoculture soy, palm oil, sugar, wheat and rice, on the existing agriculture land. To make the whole chain even more efficient we mill them into a powder or process into a liquid which we distribute to the households according to subscription (it is already happening you know!). In this way we can save a lot by reducing peoples’ cooking, their expensive private kitchens and household appliances. Perhaps solar powered drones can deliver? There are alternatives of course. Instead of looking into one commodity or one “ecosystem service” at a time we need to develop the food and agriculture system so that we combine the production of good and nutritious food with carbon sequestration, soil fertility, bio-diversity, human relations and culture in the same regenerative landscape. Such a landscape can host vibrant rural communities instead of being a supplier of raw materials to the cities or a dump. A re-localized food system will become both the means and the end in such a bright future.