What made Europeans so successful in the task of conquering the world? My interpretation is that it was the result of periodic “Seneca Collapses” of the European population which made it possible to accumulate resources that would then be available to propel the European expansion. It is an effect that may be called the“Seneca Rebound” that makes growth faster after a collapse.

The Middle Ages are sometimes referred to as the “Dark Ages” — this is mostly untrue, but it is not wrong to apply this term to the early Middle Ages, called also the “Late Antiquity”(1). According to some estimates, in 650 AD the European population had shrunk to a historical minimum of some 18 million people, about half of what it had been during the high times of the Roman Empire. If you think that today the European population is estimated to be as more than 700 million people, it is almost impossible for us to imagine the Europe of the early Middle Ages: it was a minor appendage of the Eurasian continent, a poverty-stricken place, nearly empty of people, where nothing happened except for the squabbles of local warlords fighting each other.

Yet, a few centuries later, the descendants of the inhabitants of this backward peninsula of Eurasia embarked in the attempt of conquering the world and were successful at that. By the 19th century, practically all the world was under the direct or indirect control of European countries or of their American offspring, the United States. How could it happen?

The conventional explanation for the European ruling of the world has to do with factors related to the “white man’s burden“, a term invented by Rudyard Kipling in 1899. According to this interpretation, the European domination was a sort of manifest destiny generated by the superior qualities — genetic or cultural — of the European people in terms of being smarter, more laborious, better organized, driven by their Christian faith, and the like. In comparison, the populations of the rest of world were lazy, disorganized, uncultured, and in the grip of superstitions.

Maybe, but the idea that the Europeans conquered the world because they are smarter than the others is not supported by any data. Europeans may find it flattering, but it is an ad hoc interpretation that doesn’t help us understand much of what led to the European world dominance. I have been scratching my head on this question for quite a while, until I stumbled into the graph below, showing two drastic “Seneca Collapses” of the European population. The term “Seneca Collapse” indicates a situation where the decline of a complex system is faster than its growth. 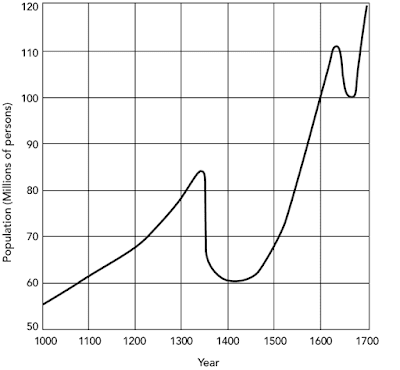 Graph from William E Langer, “The Black Death” Scientific American, February 1964, p. 117 — note how growth is faster after the collapse than it was before. This is what I call the Seneca Rebound.

Note first of all that the data are uncertain and not all authors see the population drop in the European population to have been as drastic as Langer does. But there is a general agreement that a drastic collapse of the European population took place starting in mid 14th century AD. The collapse is often attributed to the spread of the “black death,” a continent-wide epidemics of plague. In reality, there were several factors that led the European population to crash down so badly, including famines and a widespread economic crisis. In a complex system it always is difficult to establish a clear-cut chain of causes and effects: when the system crashes, many factors collapse together. The population crash plague that hit Europe in mid 17th century was less drastic, but also associated with a new outburst of the plague. These two Seneca Collapses followed the one I already mentioned, when the Roman Empire collapsed during the 6th-10th centuries AD.

There is a common element of these three collapse: the remarkably rapid recovery that followed. Let’s describe that in more detail.

The first collapse (from the 5th to the 8th century). After the fall of the Western Roman Empire, Europe started recovering and soon it was able to mount military attacks against neighboring regions. The first crusade started in 1095 and for some three centuries successive waves of European armies attacked the region we call today the Middle East, succeeding in creating a number of European kingdoms in the area. The result was, ultimately, a failure and the European crusades and the European Middle Eastern kingdoms withered with the mid-14th century.

The Second collapse (mid-14th century). The population crash was brutal, but as soon as Europe started recovering, a new phase of expansion started: it was the age of exploration that we may consider to have started with the discovery of the island of Madeira in 1430 and then proceeding with a remarkable burst of explorations that lasted for about a century from mid 15th century to mid 6th. This burst included Columbus’ travel of 1492 and the start of the gradual expansion of Europeans in Africa and in the Americas.

The Third Collapse (mid-17th century). In this case, the collapse was not so drastic as the first two and it didn’t really stop Europeans from expanding. But, with the restart of population growth, Europe saw a new phase of economic growth which ushered the age of coal and, with it, the “age of divergence” when Europe truly conquered the rest of the world and started thinking of themselves as carrying the “white man’s burden.”

So, there is clearly a pattern here: the expansion of the European social system didn’t go on smoothly, but in bursts. Over some two millennia, the European population grew from a few tens of millions up to the current 700 million people. In the process, it underwent at least three major crashes but, every time, it restarted growing. This bumpy expansion trajectory is typical of complex systems which tend to show what I call the “Seneca Effect,” cycles of slow growth and fast collapse.

Europe, intended as a social system, is a complex system and it does tend to show the Seneca behavior. It is the result of the combination of resource depletion and pollution. Before the fossil fuel age, society had two main natural resources to exploit: fertile soil and forests. Both tend to be overexploited, that is destroyed faster than they can regrow. Forests are cut faster than trees can regrow and the fertile soil is eroded and washed to the sea faster than it can reform. The decline of agriculture not only puts an end to population growth, it causes it to collapse ruinously as an effect of famines and epidemics. The loss of the revenues from forests typically weakens the state and the result is internecine wars which, of course, hasten the collapse. Both wars and epidemics can be seen as forms of pollution and the final result is what I call the Seneca Effect: a decline which is much faster than growth.

But there is life after the Seneca Collapse. The disappearance of a large fraction of the population frees some previously cultivated land for forests to regrow. Then, when the population starts re-growing, people find the new forests as a near-pristine source of wood and — once cut — of fertile soil, and the cycle restarts. The new cycle may grow faster than the earlier one because society still remembers the social structures and the technologies of the previous cycle. This is the “Seneca Rebound” — growth may be faster after collapse. You can see the Seneca Rebound in the curves made by Langer for Europe. Note how growth is faster after the collapses than it was before. This is because, I think, the Europeans had kept the social and technological structures they had developed before the crash — there was no need, for instance, to re-develop their ship-making technology (3). So, they could exploit more effectively the resources that the collapse had freed.

Then, Forests are the basic resource needed to conquer the world and the Europeans exploited them effectively. Trees provide the wood for ships and the charcoal made from wood provides the material needed to make steel for weapons. Not for nothing, it was said that England had conquered an empire with ships of wood and men of iron.

But how was it that the Europeans were so much better than others at exploiting their forests? As always, success is a question of timing, opportunities, and luck. On the opposite side of the Mediterranean, the Arab civilization was socially and technologically as sophisticated as the European one – perhaps more – but their climate didn’t allow forests to grow fast enough to avoid rapid overexploitation (2). The American civilizations we call “pre-Columbian” had forests, but they hadn’t yet developed the technologies of steel and of oceanic ships — they also lacked horses for transportation and as a military weapon. The Chinese, instead, had the technologies and also the forests and, indeed, they embarked in a parallel phase of explorations.

During the 12th-13th centuries an outbreak of the same plague that had affected Europe caused a decline in the Chinese population, that was followed – possibly as a consequence – by the Mongol invasion which led to the fall of the Song dynasty. When the Chinese economy experienced its own Seneca Rebound, the age of treasure voyages started in the early 1400s, during the Ming dynasty, in a period when the population had restarted growing. (4)

China population trends according to a reconstruction published by Columbia University.

But the Chinese stopped their exploration phase and retreated within their borders. So, the Europeans found no competition in their worldwide expansion and that was the origin of the history we know.

These considerations are qualitative, but I think there is something in the idea of the “Seneca Rebound” as an engine that propels civilizations forward in bursts. If this is the case, if the world’s civilization goes through a new Seneca Collapse, as it is likely to happen, will it restart expanding afterward?  If we manage to avoid that the coming crash is so bad that we lose the knowledge we accumulated over several centuries and that climate change doesn’t erase humankind as a species, we may well restart expanding using renewable energy — this time into space. Why not?

(1) If you are interested in the late antiquity period, and you can read Italian, you should read “L’Impero Globale” a recent book by Alessia Roberta Scopece who finds many parallels that age and our modern Globalization.

(2) The destruction of the Middle Eastern and North African forests may have been irreversible, as I note in this post of mine. (h/t Steve Kurtz) 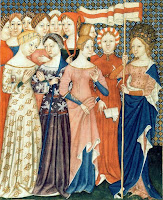 (3) Nor there was any need to reinvent luxury and, with the rebound, Middle Ages ladies started dressing like high fashion models, as I describe in this post.

(4) Another reconstruction of the Chinese population is shown below, from an article dealing with the same question as this one — they arrive to completely different conclusions, but it is normal. 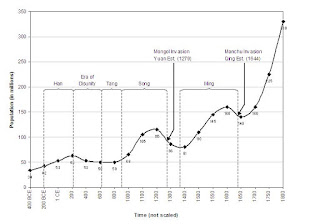