Last month in rainswept and flooded Cumbria we launched Dark Mountain: Issue 14 – TERRA into the world, a co-production between three editors – Nick Hunt, Nancy Campbell and myself – three scouts from different regions and over 60 writers and artists. It’s  a travel edition collection that looks at journeys, place and belonging in times of diaspora and descent. You can read the introduction and several extracts To TERRA over on the Dark Mountain website, meanwhile here is a piece I wrote for the book on giving up flying and a life on the road, and a return to my ‘native’ land.

It is hard to know that this magic carpet exists and that one will no longer fly on it.– Jean CocteauOpium)

‘The way these people are living is not what I had in mind’– Sun Father, Zuni creation myth

I’m sitting under the peepal tree in the deer park in Sarnath. Dark-tuniced Tibetan students, white-clad nuns, orange-robed monks, many-coloured tourists move around the tree, and contemplate the statues of the Buddha and his five disciples with their piled-up Aryan locks. It was here the Buddha delivered his first teaching. His words are carved in slabs of stone in different gold-scripted languages. The inscription reads that after declaring the Four Noble Truths and the Eightfold Path, the devas in all the invisible circles above the Earth shook with fear. 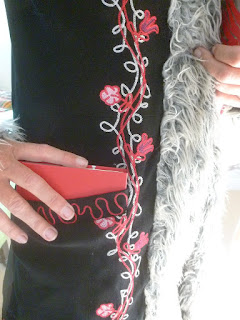 ‘We could go to la Casa de los Azulejos,’ said Mark, as we both in that moment find ourselves in a dark-panelled dining room surrounded by businessmen in suits and chattering families. It was where we liked to go for breakfast in Mexico City in our travelling years. There are white tablecloths and waitresses with paper wings the colour of sugared almonds flying past with trays of huevos rancheros and pan dulce. A glass of maracuyá juice sits on the table in front of me and for one moment time stands still. Outside the blue sky arches above the Alameda, above the the megalopolis, stretching out towards the Sierra Madre, backbone of America, towards the forests of glowworms and jaguars, towards the ever-moving oceans of the world.

Images: above ‘Shrine at Varanasi’ by Juhi Saklani from her story Rooted about defending the street trees of India. Left: A pocketbook for troubled times: Dark Mountain Issue 14 – TERRA is available from the online shop for £19.99; the London launch will take place at The Baldwin Gallery on 22nd November. Do come!
c