Jackson, Mississippi, will be “the most radical city on the planet,” Chokwe Antar Lumumba, the city’s mayor, pledged at the People’s Summit in Chicago, where he spoke last July after his landslide election win.

The promise is grounded in a plan. Through participatory democracy and building counter-power, Jackson is organizing, and co-designing, an escape from capitalism and structural racism. The plan is comprehensive, and transforming the economy with cooperatives is one pillar. 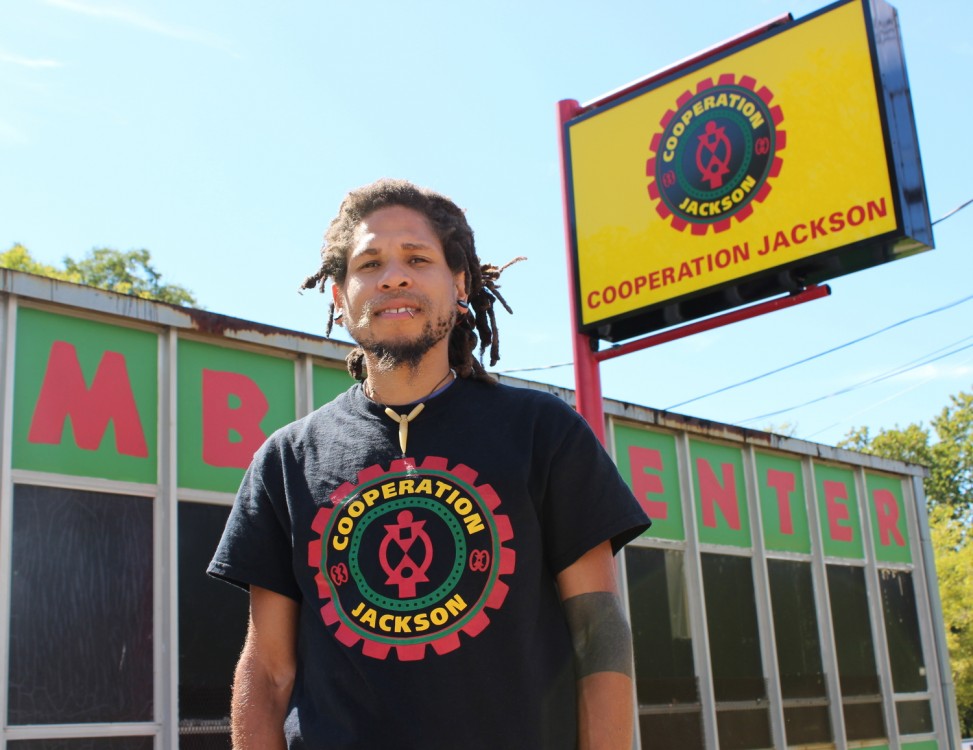 RISING JACKSON THROUGH COOPERATIVES AND A SOLIDARITY ECONOMY

“We want [cooperatives] to become the dominant feature of our local economy,” Kali Akuno told The Nation. “It’s really about a localization of the economy, about maximum control in the community’s hands. These are the things we can do that protect us from the ravages of global capitalism.”

Akuno and Mayor Lumumba are co-founders of Cooperation Jackson, which launched in May 2014. For the solidarity economy they seek to build, cooperatives serve as a cornerstone.

Jackson, and the state of Mississippi, need change. It remains the poorest part of the U.S., with a predominantly African-American population that first survived slavery, then apartheid Jim Crow laws. The structural racism continues today, as Akuno shorthands the region’s problems as the three P’s: Prisons, Poverty and Paternalistic white supremacy.

Mississippi is also an epicentre of Afro-American resistance, ever since the 1729 indigenous-slave Natchez Rebellion. From as far back as the 1800s, black farmers have formed cooperatives and other forms of social/economic solidarity in the region.

Flash forward to 2005, an important date in reaffirming Jackson’s cooperative culture, when the Malcolm X Grassroots Movement and Jackson People’s Assembly co-created the Jackson-Kush plan in 18 predominantly African-American counties across the state.

Neglect of black communities after Hurricane Katrina catalysed the plan. In economic terms, it was an effort to reverse the status quo so that the economy worked for all people. Today, Jackson has a community center and cooperatives incubator called the Chokwe Lumumba Center for Economic Democracy and Development, named after the current mayor’s father, whose premature death in 2013 ended his legacy-making work as Jackson’s mayor. The Jackson plan also facilitates education programs and a federation of cooperatives, and aims to foster cooperative banks.

Among the Jackson movement’s strategies have been to buy up vacant lots to create a community land trust and prevent property speculators from out-pricing locals. Some land is used to build a growing eco-village that provides affordable and sustainable housing. Solar and green energy cooperatives are also being developed.

Jackson pledged to be “the most sustainable city in the south” when Lumumba Sr. was mayor. This work continues today.

The Malcolm-X Grassroots Movement’s slogan, “Free the Land,” cuts to the heart of this new kind of inclusive sustainable economics. Urban Freedom Farms are growing to provide sustainable jobs and affordable fruit and vegetables to working people. Post-crash Detroit has gone even further in the square area it has farmed.

The Jackson-Kush plan advocates the community empowering itself in tandem with political representatives, transforming the system both inside and out. Mayor Lumumba Jr. has reinstated his father’s 1% tax to rebuild the city’s neglected infrastructure and has retained city control over education at Mississippi State. Educational investments are set to increase.

Lumumba is also using his mayoral platform to further promote the Jackson-Kush plan and to resist white supremacy. For instance, he boycotted and denounced Trump’s visit to the city’s Civil Rights Museum.

The Jackson plan looks toward future decades while building on centuries of resistance. Its advocates stress that “they are going slowly as they are going far,” echoing the Zapatistas of Chiapas who are themselves building a cooperative economy, as are people in the Basque Country of Spain with the Mondragon network.

Taking inspiration from closer to home, Jackson also looks to Cleveland, Ohio, which is driving an innovative economic model it hopes to serve the people, called Community Wealth Building. A core idea in Cleveland is to create “anchor institutions,” places like hospitals, schools and universities that buy locally. Cooperatives are now rebuilding the city’s economy.

Across the ocean, Preston, Lancashire in the UK has replicated a similar project and, in doing so, keeps an an extra £1.2 billion in its local economy.

Both projects, in Ohio and Lancashire, are intended to turn around economically depressed areas hit hard by the 2008 financial crash. At the city level, Jackson has taken on these ideas, pushed especially by Ward 6 Councilman Aaron Banks. 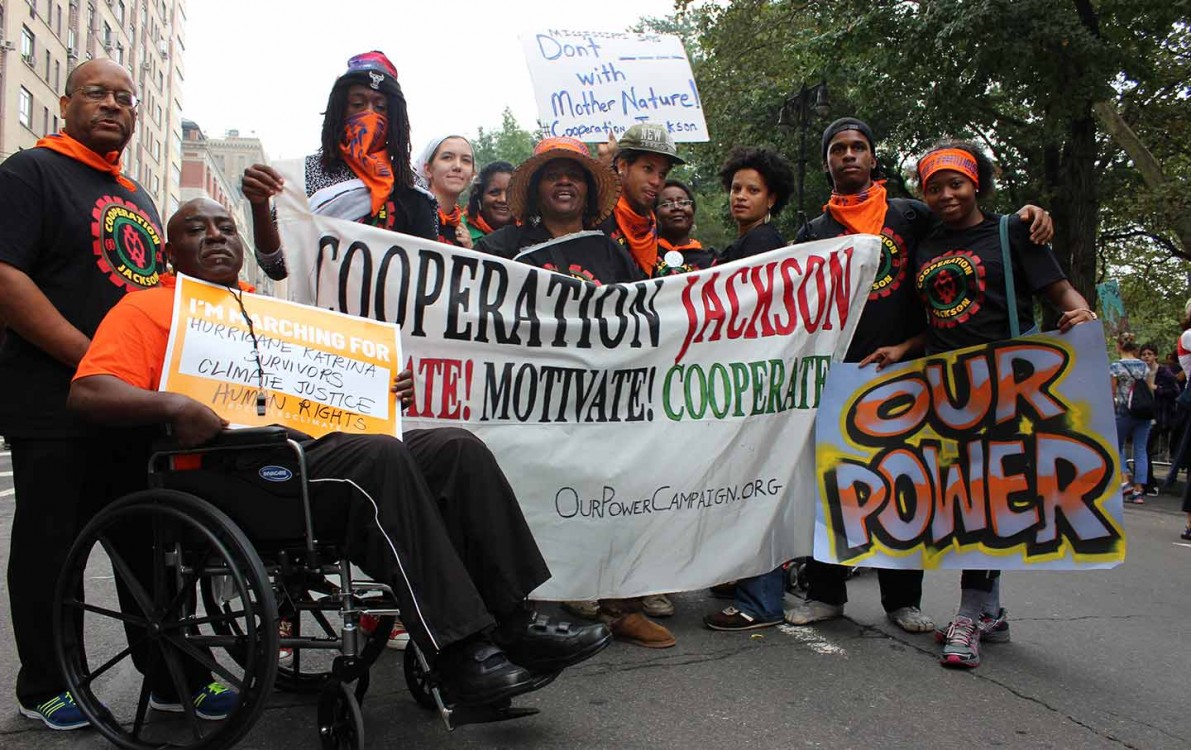 YOU CAN’T MOUNT A DEFENSE WITHOUT AN OFFENSE, OR VICE VERSA

The way that political and economic crises is propelling counter-municipal movements to form cooperatives and other economic alternatives is a trend weaving through global radical municipalism. Just as Jackson has developed ideas reflecting its rich history of resistance, it provides ample learning points for other cities to follow.

A key strategy it employs is this: as a city it cannot simply rely on the political sphere, nor work completely outside of it. Said in another way, you cannot resist systemic oppression without building an alternative. As Kali Akuno explained it: “One strategy without the other is like mounting a defense without an offense or vice versa. Both are critical to advancing authentic transformative change.”

The Jackson plan focuses on participatory democracy as much as rethinking economics. The People’s Assembly holds mass engagements four times a year, providing a chance for the community to guide their elected representative, while also implementing participatory budgeting plans.

The Jackson plan is looking for citizens to co-design an inclusive future. One issue – that only the richest will have access to the latest digital technologies, such as 3D printers, known as a “fabrication divide” – is being dealt with through crowd-funding for a Community Production Center and Community Production Cooperative. Forging an inclusive tech future has a parallel with the Rights to the City model by which residents are actively reshaping their cities.

The Jackson plan – like the economic makeover in many rebel cities – has an internationalist perspective, aiming to grow within across U.S.-wide and international solidarity economy networks. The familiar lesson here again is: You can’t only smash the current system, but must co-design another world that circumvents, and can ultimately replace, the current one.