This week’s graph is reprinted from Global EV Outlook 2018, the latest in a series of annual reports compiled by the International Energy Agency (IEA). The graphs below show IEA projections of the number of EVs in the world by 2030 under two scenarios.  The first, the “New Policies Scenario,” takes into account existing and announced national policies.  Under this scenario, the number of EVs on the road is projected to reach 125 million by 2030. 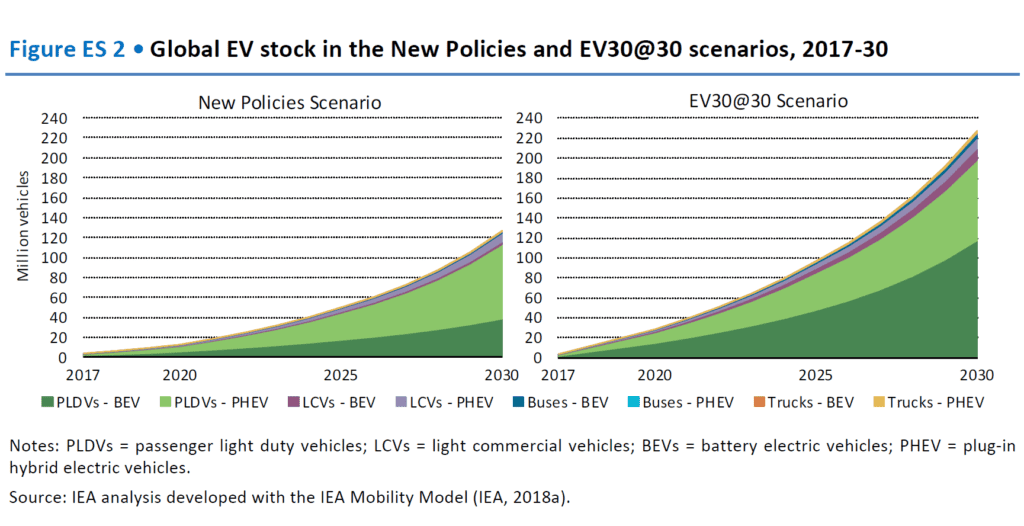 The second scenario is called “EV30@30.”  This scenario is based on the assumption that governments will announce and implement new policies that will increase global EV penetration to 30 percent of new car sales by 2030—a 30 percent sales share.  This 30 percent share is roughly what is needed to begin to meet emission-reduction commitments made in the lead-up to the 2015 Paris climate talks.  Under this scenario, the number of EVs on the road could reach 228 million by 2030.

In either case, whether there are 125 million EV’s on the road in twelve years or 228 million, the result will be an impressive one, given that there were fewer than a million just four years ago.

Electric cars are not a panacea, but they do represent an important transition technology; electrifying much of the global car fleet can buy us the time we need to build zero-emission train and transit systems.  Thus, it is very important that we move very rapidly to maximize the number of EVs built and sold.  But the IEA is clear: EV adoption will depend on ambitious, effective government action.  The 228 million EVs projected under the EV30@30 Scenario will only exist if governments implement a suite of aggressive new policies.  The IEA states that:

“The uptake of electric vehicles is still largely driven by the policy environment.  The ten leading countries in electric vehicle adoption all have a range of policies in place to promote the uptake of electric cars.  Effective policy measures have proved instrumental in making electric vehicles more appealing to customers…, reducing risks for investors, and encouraging manufacturers to scale up production ….  Key examples of instruments employed by local and national governments to support EV deployment include public procurement programmes…, financial incentives to facilitate the acquisition of EVs and cut their usage cost (e.g. by offering free parking), and a variety of regulatory measures at different administrative levels, such as fuel-economy standards and restrictions on the circulation of vehicles based on tailpipe emissions performance.”

In 2018, about 95 million passenger cars and commercial vehicles were sold worldwide.  About 1 million were electric—about 1 percent.  The goal is to get to 30 percent in 12 years.  Attaining that goal, and thereby averting some of the worst effects of climate change, will require Herculean efforts by policymakers, regulators, international bodies, and automakers.

* There are two main types of EVs.  The first is plug-in hybrid electric vehicles (PHEVs).  These cars have batteries, can be plugged in, and can be driven a limited distance (usually tens of kilometres) using electrical power only, after which a conventional piston engine engages to charge the batteries or assist in propulsion.  Examples of PHEVs include the Chevrolet Volt and Toyota Prius Prime.  The second type is the battery electric vehicle (BEV).  BEVs have larger batteries, longer all-electric range (150 to 400 kms), and no internal combustion engines.  Examples of BEVs include the Chevrolet Bolt, Nissan Leaf, and several models from Tesla.  The term “electric vehicle” (EV) encompasses both PHEVs and BEVs.