Imagine you are an ant. All you have seen in your life are only other ants, touching their antennas and moving on. Then, one day, the Ant God, who is benevolent and merciful, lifts you up in the air and shows you the world from there. And, miracle, you see the anthill for the first time. You see the teeming, organized, complex, superorganism which you never suspected to exist but of which have been a single cell for all your life.

That would be quite an experience for an ant and we, humans, might be subjected to something similar: the sudden, unexpected, and amazing perception of the human superorganism – a planetary-scale creature, not unlike a giant anthill, engaged in changing the world.

Physicists enjoy talking about “emergent phenomena,” that is about entities appearing as the result of the interaction of smaller and simpler elements. An anthill is a good example: a single ant is not an anthill and knows nothing about anthills, but the behavior of many ants creates the anthill.

Humans can do something similar, it is an emergent characteristic which appeared only in recent times in the human evolutionary history. Collecting first into bands, then villages, then cities, then states, now humans form a single, giant creature – the superorganism – which is literally devouring the planet to keep itself growing. In a sense, it is like a science fiction novel, but it is real: you can see it at work – one good place to get a feeling of its presence is in Susan Kucera’s movie “Living in the Future’s Past.”

The concept of a human superorganism is not new – its origins may go back to the work of Gustave Le Bon, “The Psychology of the Crowds” (1895). The idea of a single, worldwide human anthill is relatively recent, but it is clearly appearing in the human memesphere. Gaia Vince gave the name of “Homni” to it, and you can find the concept scattered over a number of sites and discussions (although often mixed with that of the human microbiome, a different emergent phenomenon).

The superorganism is explicitly mentioned by Nate Hagens in his several appearances in the movie, but it is present all over it. It is one of the threads, perhaps the main one of the whole story. The movie itself is an emergent phenomenon, it is amazing how Susan could weave together many different and complicated concepts, told by different people who are not speaking to each other, into a coherent whole. And out of this whole, a fundamental concept “emerges:”  humans have taken control of the planet, but they lost control of the superorganism.

So, once you discover that you are surrounded by this giant creature – you are actually part of it – what is to be done? This is the classic question asked in all the discussions on how to “save the environment.” Turn off the lights when you leave home, bicycle when you can, eat less meat, that kind of stuff. All that, of course, will have no effect on a planetary-size monster devouring you and everything else.

But is the superorganism evil? If so, what should be done about it? A possible suggestion could be to break it down into smaller parts which could do less damage to the planet. But that would probably change little to the situation. Or, we could try to tame the superorganism, turning it into something benevolent and merciful. Is it possible? Let’s say that it may not be impossible. And this seems to be the gist of the movie when, at the end, we hear Jeff Bridges citing Teilhard de Chardin as

Someday, after mastering the winds, the waves, the tides, and gravity, we shall harness for God the energies of love, and then, for a second time in the history of the world, man will have discovered fire. (Pierre Teilhard de Chardin)

And that makes perfect sense: if the superorganism can be tamed and educated, it can only be done by means of love. 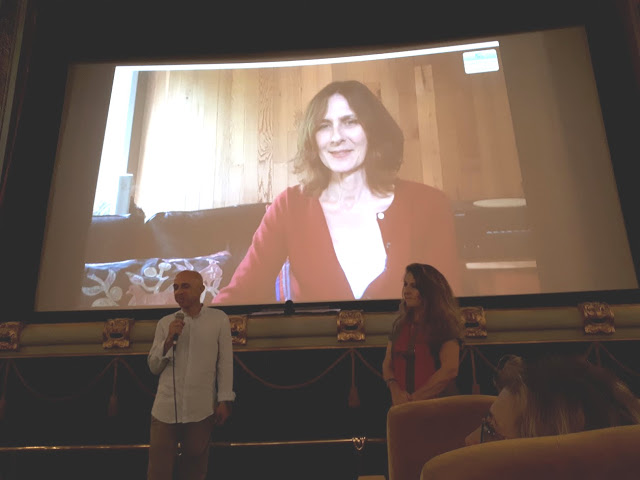 Susan Kucera speaks at the presentation of “Living in the Future’s Past” in Florence on May 31, 2018. In the picture, you see also Stefano Dominici (University of Florence) and Gloria Germani (Odeon Cinema)

Below, Nate Hagens speaks about the Superorganism