The ferocious “frankenstorm” known as Sandy that ripped through greater New York City five years ago remains one for the record books. Like this year’s hurricane season, it racked up tens of billions of dollars in economic damages.

Superstorm Sandy had another close, yet underappreciated, similarity to this year’s hurricanes: less affluent groups of people suffered more, both in the initial damage and recovery.

An analysis by a team I led at Stony Brook University shows that Sandy’s destructive path across Long Island, from Brooklyn to the Hamptons, was not as even-handed as media coverage often made it seem, both in its initial impact and people’s recovery.

The storm season of 2017 has already left behind an even more dramatic version of this story: Following Hurricane Harvey, Houston quickly switched water and electricity back on and emptied most emergency shelters. Meanwhile, several weeks after Hurricane Maria hit Puerto Rico, much of the island is still in “survival mode.” Both hurricane seasons expose the close ties between severe weather events and social inequality.

Though no longer a hurricane when it hit the New York region, Sandy proved big and powerful enough to stir record rises in ocean levels, vying with Long Island’s worst recorded storm of 1938. While high winds brought down trees on cars, homes and power lines across the island’s interior, flooding brought the most damage. Coastline communities bore the brunt of the storm.

In the wake of an onslaught that sounded “like a jet plane was landing on your street,” Rockaway resident Richard Blanck found himself up to his ankles in water on his front porch. In nearby Long Beach, “those few residents in the poor neighborhoods of town who owned cars saw them swallowed up, and disabled, by the salty water.” Farther from New York City, on Long Island, 100 Mastic Beach residents had to be rescued from flooded homes. 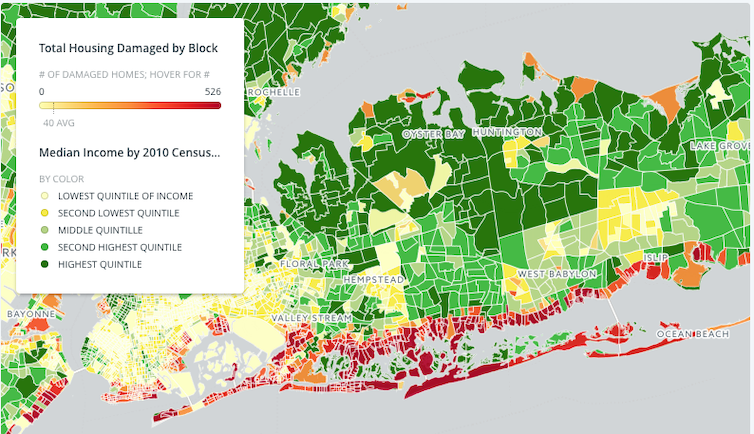 Superstorm Sandy caused more damage in lower-income parts of Long Island, which are more vulnerable to storms. Stony Brook University’s Center for the Study of Inequality, Social Justice and Policy, CC BY

All three of these communities, among the hardest hit by Sandy, lie along Long Island’s south shore, which has long drawn lower- as well as middle-income residents. This coastline is also more vulnerable to storms sweeping up from warmer waters. By contrast, since its early 20th-century reputation as a “Gold Coast,” the more insulated north shore remains more uniformly well-to-do and white.

We looked at where people who registered significant damage with the Federal Emergency Management Agency (FEMA) following Sandy lived. Mapping that data, it was clear the northern coastline was affected relatively little, compared to the south-facing and less wealthy parts of Long Island where people reported higher damage.

After World War II, more city-ward shoreline communities such as the Rockaways, Coney Island and Long Beach fell on hard times. Robert Moses and other planners then sited public or publicly subsidized housing there, as blacks and Latinos shut out of much suburban housing also moved nearby.

So when Sandy’s largest storm surges washed in — 17.5 feet high in Long Beach and 14 feet in parts of the Rockaways — African-Americans bore an inordinate share of the decimation. 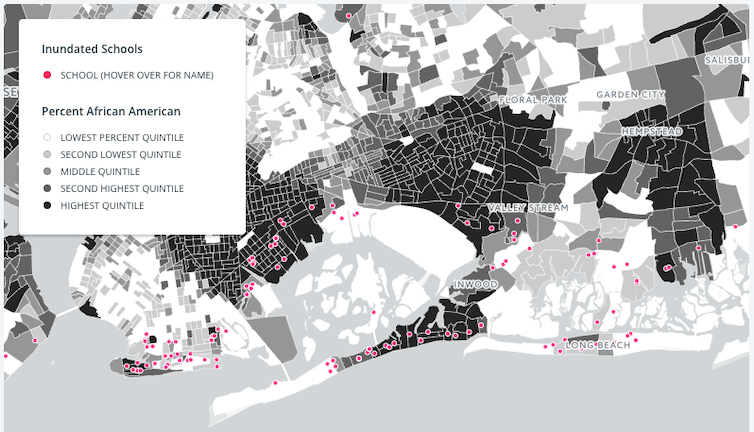 Public housing was built in south coastline neighborhoods in the New York City area following World War II and led to a higher concentration of minority groups. The impact of flooding schools hit neighborhoods with a higher African-American population, denoted by darker blocks. Stony Brook University’s Center for the Study of Inequality, Social Justice and Policy, CC BY

One report three years after the storm recounted the experience of Melissa Miller in Long Beach, whose apartment in the Channel Park Homes development was inundated with five inches of sewage-infested water. Nearly every home in Long Beach was flooded, and two-thirds suffered “heavy or strong damage,” as did 20 percent of those in nearby Far Rockaways, according to state statistics. Our investigation showed her experience was shared by others in publicly subsidized homes, many of them with African-American residents.

Latino communities, though slightly underrepresented in the most damaged areas, joined African-American counterparts in watching many of their local schools undergo flooding. As our geographic analysis demonstrated, the inundation of schools proved widespread along the south shore from central Nassau westward through Queens and Brooklyn.

But along the southeastern and northern shorelines of Long Island, hardly any schools flooded, even in the most stricken communities. More affluent Bayville, in northern Nassau, suffered an 11-foot storm surge, but its schools, situated on higher, dryer ground, lay out of harm’s way.

Less well-off white communities like Coney Island suffered too, and not just from flooding. Breezy Point, for instance, lost 10 percent of its housing, 135 homes from an electrical fire as well as 220 from the flood. Eastward along the south shore, from Nassau out through Suffolk counties, we found that wealthier communities weathered Sandy’s waves better than poorer ones such as Mastic Beach.

Mastic Beach, in red, suffered worse damage than Westhampton just to its east because there is denser housing stock and because Mastic Beach has struggled to pass zoning codes to guide and limit residential development in low-lying areas, which makes it harder to withstand flood waters.

Known by the late 20th century as “the poor man’s Westhampton Beach,” Mastic Beach had long offered a cheaper version of shoreline property, in part because the land on which it lies was so uniformly close to sea level, near the water table. So when a Sandy surge washed in, 1,000 of its homes were flooded, many of them by both seawater and cesspool wastes. Next door, the original Westhampton Beach, hillier as well as more affluent, experienced far less damage from the storm.

Clearly Westhampton Beach’s lesser vulnerability did not just stem from its higher ground. Westhampton Beach has lower housing density compared to Mastic Beach and longstanding zoning for residential buildings, making this and other affluent areas better able to withstand and absorb floodwaters. Even before Sandy, Westhampton Beach had also long pushed to preserve dunes and other topography to mitigate surges from Sandy and other storms.

If disadvantaged residents and communities suffered more from the storm’s initial blow, they also faced greater obstacles in the struggle to repair or rebuild.

In a better-off north shore town like Bayville, 86 percent of those with severely damaged homes had flood insurance, nearly three times more than the 30 percent in Coney Island/Brighton Beach. Further drilling into FEMA data showed that in damaged areas of Brooklyn with predominantly African-American residents, only 14 percent of homeowners were insured. Those without insurance had to await FEMA or New York state grants, which often took years to arrive.

Over the last five years, FEMA as well as New York Rising, the state’s rehabilitation program, have accomplished much across the island, but also frustrated many Sandy victims with the slowness and paltriness of their aid. That only two-thirds of homeowners in New York Rising have completed their repairs five years after the storm also means that a third have not.

And while Bayville was beginning its third phase of rebuilding in 2016, those in Long Beach’s Channel Park Homes still awaited adequate repairs by the city housing authority. As reported by the group ERASE Racism, Melissa Miller had received only a new refrigerator and some replacement drywall, along with a “sanitizing” that still left her apartment with a nauseating smell.

Parallels in Harvey and Maria

Sandy left a plethora of destruction in its wake, from its 147 deaths to approximately US$65 billion in damages. It also exposed vulnerabilities that were much longer in coming: communities in low-lying areas lacking sufficient infrastructure and insurance for its floods.

We’ve seen this general pattern play out this year as well. As with Hurricanes Irma and Jose — and with a majority of the American citizens in a Hurricane Maria-stricken Puerto Rico — less well-off communities have already shouldered the severest burdens, whether because of lower incomes or racio-ethnic origins or both.

Now more than ever, we need a nationwide conversation on ways our coastal landscapes have developed so that our most vulnerable citizens are now at greater risk from such massive storms. Officials need to find more reliable ways of illuminating problems faced by the less advantaged, and to ensure these are addressed as quickly and effectively as those of the better-off.

Altering these patterns will be difficult but ever more urgent, since future hurricanes are expected to grow in scope and strength.