Facing all of these grave threats, humans collectively have chosen to go insane. We are greening our homes, buying electric cars, climbing stairs over riding the elevator. We are changing lightbulbs, buying local stuff, putting solar on the roof. Meanwhile CO2 and methane emissions continue to rise.
Why such a disconnect? Why are we, as Martin Lukacs asks, “bringing a flyswatter to a gunfight?”
The places we get our information — mainstream media, television ads, school textbooks, church sermons, even the campaigns of mainstream environmental groups — have all gone soft. They are dumping out fake news by the bushel. Even Al Gore and Bill McKibben soft-pedal human extinction.
But, hang on, there are a few loose threads in our sweater. What if we just pull … here?
At the terminal phase of complex civilizations, just before they implode and the great cities all crumble as their populations disperse back into nature, typically accompanied by famine, disease, wars, waves of refugees and precipitous decline in stored knowledge, there are the grand eras of spectacle, theater, and peak excess.
You can put that pin in the human timeline now, marked “You Are Here.”
We are at or close to the summit of Peak Excess, where we shall have the best views of the splendid dawn of the Age of Consequences.
The sweater thread? Foodies.

Foodies are a fragile thread could alter that trajectory. Gourmet feasts and fads, celebrity chefs and gastronomic tournaments are also standard fare during Peak Excess periods, but the contemporary variety bears a slightly different flavor. We have begun, at the edges of that movement, to compute nutrient density and score it along with flavor and tradition.
Nutrient density is a function of growing healthy plants and, in some cases, feeding them to healthy animals. These become food by ways and means that do not rob their nutrient stores and may even enhance them.
For example, organically grown carrots, onions and cabbages might be hand processed into slaws and krauts that allow friendly lactobacillus to join your gut microbiome to help digest your food and boost your immune system.
Perhaps — because they are organically certified — they came from soils that are teeming with happy aerobic bacteria, fungi, protozoa, nematodes, microarthropods and earthworms (as opposed to being deadened by the wasting effects of chemical addiction or hyperactive genes).
Plants garden, too. They cultivate the soil microbes they most desire by feeding them the sugars those life-forms most crave. Out of gratitude or greed, the microbes build zones of protective communities around the roots of the plants. They excrete enzymes to absorb, concentrate and convert those nutrients.
To pay their rent and get more of those great sugars, they give back to the plants the nutrients they have converted, using runners like root nematodes.
This nutrient-cycling system been going on in our soils for about the last 3.5 billion years. It is highly sophisticated now. When dumb two-legged agronomists arrived they proclaimed that only three essential nutrients, nitrogen, phosphorus and potassium (NPK) are needed for plant growth. So now we run down to the store and buy a sack of chemical fertilizer, made from and by fossil fuels, and we expend enormous energy — a caloric deficit of 10 to 1 or greater — and besides producing food with all the nutrition of cardboard we bank existence-threatening greenhouse pollution.
Elaine Ingham says,

“Everything in balance. And that is what the biology is so good at. Releasing all the nutrients in the proper concentrations so nothing is lacking. It’s like calling up for a pizza — the exudates are the telephone, calling up and asking for exactly what it needs, and the bacteria and fungi are the cooks who pull all the right ingredients together, based on what the plant ordered, and the protozoa etc. are the pizza delivery guys, who deposit those nutrients right where the plant needs them, in the root zone. Isn’t that cool?”

If we wonder why we get sick all the time, maybe it is no wonder. We are missing nutrients just the same as our plants are. Mostly, we are missing the same nutrients are plants are.
When it comes to growing nutrient dense foods, nothing outperforms biochar. There is a good reason for this. The micropore structure works in the soil the same way a coral reef works in the ocean — as a platform for biodiversity. That it also converts carbon into long-term storage away from the atmosphere is of minor concern to foodies. What it does to the life of the soil, it also does for the health and the nutrient-density of the plants. That not coincidentally translates into deeper, richer flavors.
Nutrient density measuring devices (beyond your nose and tongue) are not yet available to consumers, but the day is not far away when they will be. Before then, we may start to see food labeling based on ND codes. We already do for some “cool” foods grown in biochar-amended soils.
We only need a fraction of the Earth’s soils to be converted to nutrient density. The French initiative 4 Pour 1000, calculates an 0.004 increase in the carbon density of soils would be enough to turn back the Anthropocene.
If we are as we eat, then perhaps we can eat our way out of this.
Lorin Fries, the head of Food Systems Collaboration for the World Economic Forum, says that food tech is changing as rapidly as iPhones:

A decade from now, the food we eat today — and the systems behind it — may seem as outdated as a phone without apps. Technology is accelerating change everywhere. The question is not whether it will reshape how we make food, move it and eat it; the question is how.

Imagine opening your fridge in 2030. Maybe that pork came from a single pig cell, grown into “clean meat” in a lab. Perhaps that leftover rice was gene-edited with CRISPR-Cas9 or the lettuce was produced with a personal “food computer” in a city building, through a data recipe.

To which we reply, eeeeewww! No thanks. 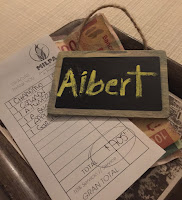 In Mexico City there is a restaurant that serves only traditional indigenous foods from chinampas, the superabundant aquacultural systems that built the Aztec Empire. The purchasing power of foodies is helping to revive the ancient chinampas of Xochimilco.
What’s wrong with terroir? Not terror, which is what comes to mind when we think of CRISPR rice, but terroir, the set of all environmental factors that affect a crop’s phenotype — its unique environment contexts, farming practices and specific growth habits. Think varietals of wine, coffee, tobacco, chocolate, chili peppers, hops, agave (tequila and mescal), tomatoes, heritage grains, maple syrup, tea and cannabis.
We would take a deep humus with faint hints of cherries and chocolate over synthetic hydroponic media any day. Perhaps the CRISPR can design to boost an ND score, but we tend to doubt it. It’s the bacteria, stupid. And for those you’ll need recalcitrant soil carbon and plenty of it.

Food, glorious food!
Hot sausage and mustard!
While we’re in the mood —
Cold jelly and custard!
Pease pudding and saveloys!
What next is the question?
Rich gentlemen have it, boys —
In-di-gestion!

Food, glorious food!
What is there more handsome?
Gulped, swallowed or chewed —
Still worth a king’s ransom.
What is it we dream about?
What brings on a sigh?
Piled peaches and cream, about
Six feet high!

Food, glorious food!
Eat right through the menu.
Just loosen your belt
Two inches and then you
Work up a new appetite.
In this interlude —
The food,
Once again, food
Fabulous food,
Glorious food.