This is an extract from Disaster Alley: Climate change, conflict and risk published recently by Breakthrough. 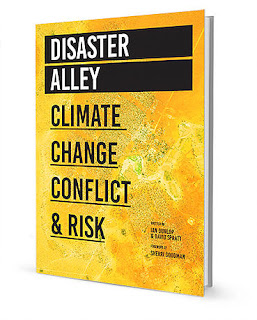 Climate change is an existential risk that could abruptly end human civilisation because of a catastrophic “failure of imagination” by global leaders to understand and act on the science and  evidence before them.

At the London School of Economics in 2008, Queen Elizabeth questioned: “Why did no one foresee the timing, extent and severity of the Global Financial Crisis?” The British Academy answered a year later: “A psychology of denial gripped the financial and corporate world… [it was] the failure of the collective imagination of many bright people… to understand the risks to the system as a whole”.

A “failure of imagination” has also been identified as one of the reasons for the breakdown in US intelligence around the 9/11 attacks in 2001.

A similar failure is occurring with climate change today.

The problem is widespread at the senior levels of government and global corporations. A 2016 report, Thinking the unthinkable, based on interviews with top leaders around the world, found that:

“A proliferation of ‘unthinkable’ events… has revealed a new fragility at the highest levels of corporate and public service leaderships. Their ability to spot, identify and handle unexpected, non-normative events is… perilously inadequate at critical moments… Remarkably, there remains a deep reluctance, or what might be called ‘executive myopia’, to see and contemplate even the possibility that ‘unthinkables’ might happen, let alone how to handle them.

Such failures are manifested in two ways in climate policy. At the political, bureaucratic and business level in underplaying the high-end risks and in failing to recognise that the existential risk of climate change is totally different from other risk categories. And at the research level in underestimating the rate of climate change impact and costs, along with an under-emphasis on, and poor communication of, those high-end risks.

An existential risk is an adverse outcome that would either annihilate intelligent life or permanently and drastically curtail its potential. For example, a big meteor impact, large-scale nuclear war, or sea levels 70 metres higher than today.

Existential risks are not amenable to the reactive (learn from failure) approach of conventional risk management, and we cannot necessarily rely on the institutions, moral norms, or social attitudes developed from our experience with managing other sorts of risks. Because the consequences are so severe — perhaps the end of human global civilisation as we know it — researchers say that “even for an honest, truth-seeking, and well-intentioned investigator it is difficult to think and act rationally in regard to… existential risks”.

Yet the evidence is clear that climate change already poses an existential risk to global economic and societal stability and to human civilisation that requires an emergency response. Temperature rises that are now in prospect could reduce the global human population by 80% or 90%. But this conversation is taboo, and the few who speak out are admonished as being overly alarmist.

Prof. Kevin Anderson considers that “a 4°C future [relative to pre-industrial levels] is incompatible with an organized global community, is likely to be beyond ‘adaptation’, is devastating to the majority of ecosystems, and has a high probability of not being stable”. He says: “If you have got a population of nine billion by 2050 and you hit 4°C, 5°C or 6°C, you might have half a billion people surviving”. Asked at a 2011 conference in Melbourne about the difference between a 2°C world and a 4°C world, Prof. Hans Joachim Schellnhuber replied in two words: “Human civilisation”.

The World Bank reports: “There is no certainty that adaptation to a 4°C world is possible”. Amongst other impacts, a 4°C warming would trigger the loss of both polar ice caps, eventually resulting, at equilibrium, in a 70-metre rise in sea level.

The present path of greenhouse gas emissions commits us to a 4–5°C temperature increase relative to pre-industrial levels. Even at 3°C of warming we could face “outright chaos” and “nuclear war is possible”, according to the 2007 The Age of Consequences report by two US think tanks.

Yet this is the world we are now entering. The Paris climate agreement voluntary emission reduction commitments, if implemented, would result in the planet warming by 3°C, with a 50% chance of exceeding that amount.

This does not take into account “long-term” carbon-cycle feedbacks — such as permafrost thaw and declining efficiency of ocean and terrestrial carbon sinks, which are now becoming relevant. If these are considered, the Paris emissions path has more than a 50% chance of exceeding 4°C warming. (Technically, accounting for these feedbacks means using a higher figure for the system’s “climate sensitivity” — which is a measure of the temperature increase resulting from a doubling of the level of greenhouse gases — to calculate the warming. A median figure often used for climate sensitivity is ~3°C, but research from MIT shows that with a higher climate sensitivity figure of 4.5°C, which would account for feedbacks, the Paris path would lead to around 5°C of warming.)

So we are looking at a greater than one-in-two chance of either annihilating intelligent life, or permanently and drastically curtailing its potential development. 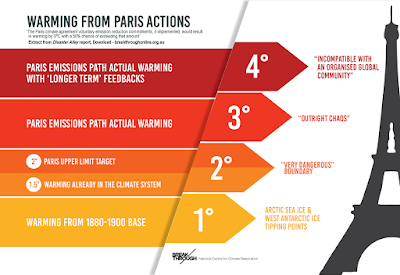 Clearly these end-of-civilisation scenarios are not being considered even by risk-conscious leaders in politics and business, which is an epic failure of imagination.

Of course, the world hopes to do a great deal better than Paris, but it may do far worse. A recent survey of 656 participants involved in international climate policy-making showed only half considered the Paris climate negotiations were useful, and 70% did not expect that the majority of countries would fulfill their promises.

The Global Challenges Foundation (GCF) says that despite scientific evidence that risks associated with tipping points “increase disproportionately as temperature increases from 1°C to 2°C, and become high above 3°C”, political negotiations have consistently disregarded the high-end scenarios that could lead to abrupt or irreversible climate change. In its Global Catastrophic Risks 2017 report, it concludes that “the world is currently completely unprepared to envisage, and even less deal with, the consequences of catastrophic climate change”.

The scientific community has generally underestimated the likely rate of climate change impacts and costs. Intergovernmental Panel on Climate Change (IPCC) reports are years out of date upon publication. Sir Nicholas Stern wrote of the IPCC Fifth Assessment Report: “Essentially it reported on a body of literature that had systematically and grossly underestimated the risks [and costs] of unmanaged climate change”.

Too often, mitigation and adaptation policy is based on least-drama, consensus scientific projections that downplay what Prof. Ross Garnaut called the “bad possibilities”, that is, the lower-probability outcomes with higher impacts. In his 2011 climate science update for the Australian Government, Garnaut questioned whether climate research had a conservative “systematic bias” due to “scholarly reticence”. He pointed to a pattern, across diverse intellectual fields, of research predictions being “not too far away from the mainstream” expectations and observed in the climate field that this “has been associated with understatement of the risks”

In 2007, The Age of Consequences reported:

“Our group found that, generally speaking, most scientific predictions in the overall arena of climate change over the last two decades, when compared with ultimate outcomes, have been consistently below what has actually transpired. There are perhaps many reasons for this tendency—an innate scientific caution, an incomplete data set, a tendency for scientists to steer away from controversy, persistent efforts by some to discredit climate “alarmists,” to name but a few”.

For many critical components of the climate system, we can identify just how fast our understanding is changing. Successive IPCC reports have been reticent on key climate system issues:

To be useful in a risk context, climate change assessments need:

a much more thorough exploration of the [high-end] tails of the distributions of physical variables such as sea level rise, temperature, and precipitation, where our scientific knowledge base is less complete, and where sophisticated climate models are less helpful. We need greater attention on the strength of uncertain processes and feedbacks in the physical climate system […]  (e.g., carbon cycle feedbacks, ice sheet dynamics), as well as on institutional and behavioral feedbacks associated with energy production and consumption, to determine scientifically plausible bounds on total warming and the overall behavior of the climate system. Accomplishing this will require synthesizing multiple lines of scientific evidence […]   , including simple and complex models, physical arguments, and paleoclimate data, as well as new modeling experiments to better explore the possibility of extreme scenarios.

A prudent risk-management approach for safeguarding people and protecting their ways of life means a tough and objective look at the real risks to which we are exposed, including climate and conflict risks, and especially those “fat tail” events whose consequences are damaging beyond quantification, and which human civilization, as we know it, would be lucky to survive. We must understand the potential of, and plan for, the worst that can happen and be relieved if it doesn’t. If we focus on “middle of the road” outcomes, and ignore the “high-end” possibilities, we will probably end up with catastrophic outcomes that could have been avoided.

It is not a question of whether we may suffer a failure of imagination. We already have.

Yet people understand climate risks, even as political leaders wilfully underplay or ignore them. 84% of 8000 people in eight countries recently surveyed for the Global Challenges Foundation consider climate change a “global catastrophic risk”. The figure for Australia was 75%. The GCF report found that many people now see climate change as a bigger threat than other concerns such as epidemics, population growth, weapons of mass destruction and the rise of artificial intelligence threats. GCF vice-president Mats Andersson says “there’s certainly a huge gap between what people expect from politicians and what politicians are doing”. 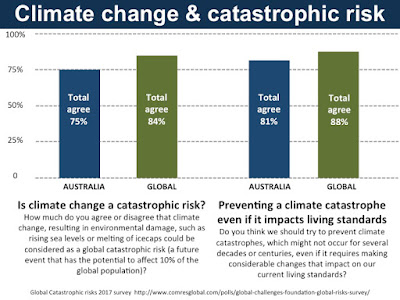 The same survey found 81% of the 1000 Australians polled agreed with the proposition: “Do you think we should try to prevent climate catastrophes, which might not occur for several decades or centuries, even if it requires making considerable changes that impact on our current living standards?”.