Ashlesha Khadse’s friends in Bangalore’s hi-tech boom are sometimes envious of her work. It’s true that they have their weekends free, but being immersed in a David and Goliath fight for a fair food system seems like pretty meaty stuff. Ashlesha’s been swallowed whole by a movement but is unruffled. Perhaps her past prepared her. She moved often during childhood—her parents were in the army, posted across India. After boarding school in Rajasthan, college in Maine, and Master’s work in Mexico, she returned to India to research the Karnataka State Farmers’ Association, KRRS.

Five hours west of Bangalore, at the Amitri Bhoomi Agroecology School, Ashlesha introduced me to Chukki Nanjundaswamy, a powerful woman leader of KRRS and director of the school. The students are Karnataka farmers from across the state, looking to wean themselves off of expensive seeds, fertilizers, and pesticides and form part of a grassroots groundswell against a global agricultural system rigged against them. A portrait of Chuki’s father and KRRS founder M. D. Nanjundaswamy hangs in a courtyard next to that of Mahatma Gandhi and Dr. Bhimrao Ramji Ambedkar, an “untouchable” who led the fight against the caste system. Both men inspire KRRS’ members. Ashlesha’s research dug into M. D. Nanjundaswamy’s leadership style, seeking to understand how it was that KRRS embraced agroecology while most farmers’ movements don’t. Most fight for access to land and markets, with their eyes on yields, subsidies, and prices. They don’t tend to question the logic of industrial agriculture. 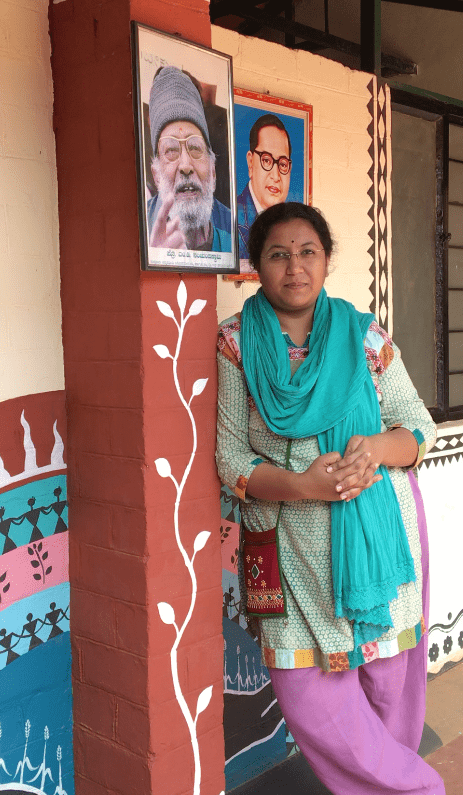 Chukki continues in her fathers footsteps, leading a peasant movement for natural farming.

Across from  M. D. Nanjundaswamy’s portrait, a doorway opened to the KRRS’ seed bank. Cupboards and shelves of jarred and labeled legumes stretch beneath drying stalks of millet and rice. The seed bank is the literal and figurative foundation of  Karnataka’s small farmers’ sovereignty, nourishment, and prosperity. The idea, Chukki explained, is that “farmers don’t have to be dependent on anything. The earth has everything. Farmers are nature’s protectors.”

Each year, Shri Subhash Palekar teaches a week-long course at Amrita Bhoomi and others across the state. The charismatic guru of “zero budget natural farming” has been supported by KRRS and has inspired farmers across Karnataka. Farmers love his entertaining, heated diatribes on the perversity of industrial agriculture and the state’s complicit subsidies for chemical inputs. Beyond the stinging criticism, they are spellbound by the practical results of applying homemade composting potions to ailing soils and under-nourished plants. Amrita Bhoomi’s fields are dotted with bright blue plastic barrels, brimming with brown soupy slosh. Amrita Bhoomi’s staff and students double as popular scientists, applying the concoction to rows of banana trees, castor oil, pumpkin and other crops too numerous to name. Their real-time experiments demonstrate what grows best where. Evidence-based results are circulated through the farmers movement; the farmers apply the learnings—and their own home-made compost—in their fields. “Agroecology isn’t new to Indian agriculture,” Chukki said. “The green revolution techonologies that wiped out agroecology happened only 50 years ago. Before that, agroecology was everywhere.”

The Karnataka farmers movement is affiliated with a global network called the Via Campesina. The Via is active in 67 countries and has taken the centuries-old struggle for “land to the tiller”—a battle still far from won—in a direction increasingly urgent for a world rocked by climate change: towards sustainable stewardship of crop diversity, soil, and water. “I’m proud of how this movement has evolved,” Chukki said. “Young farmers are joining. They know what’s going on with the agrarian crisis and are choosing agroecology as a way forward.”

The day before we traveled to Amrita Bhoomi, Ashlesha had returned from the Conference of the Parties on the Convention on Biological Diversity in Cancun, Mexico. She was still jet-lagged. I asked her why a farmers movement would bother with a global gathering on biodiversity. On the face of it, it seems far from food production. Agrobiodiversity—the biodiversity of cultivated plants, Ashlesha explained, marries farmers with environmentalists.

Both constituencies are close to Ashlesha’s heart. “Agroecology attracts me because, for the sake of both consumers and farmers, we can’t continue producing food in the way that we have been,” she said. In the movement for agroecology, she has found a sort of blended family—not always harmonious, but one that appreciates how biodiversity contributes to farmers’ well-being and a healthy planet. In Cancun, she fed journalists stories of indigenous peoples growing food and conserving landscapes.

Colorful rocks at the edge of Amrita Bhoomi’s fields were painted with Kannada stanzas from a 12th-century poet. Ornate script on one warned of the environmental, income, and nutritional dangers of over-dependence on rice. Another exhorted respect for rice’s poorer sister, millet. Re-introducing millet is one way that Amrita Bhoomi seeks to preserve biodiversity. It is less sensitive to an erratic climatic, requires less water, and has the bonus of being more nutritious. The fact that India counts more than 50 million diabetes cases, the highest in the world, is partially blamed on over-consumption of rice. Yet rice has deep roots in Indian cuisine. Ashlesha knows that it won’t be easy to exchange millet for rice. 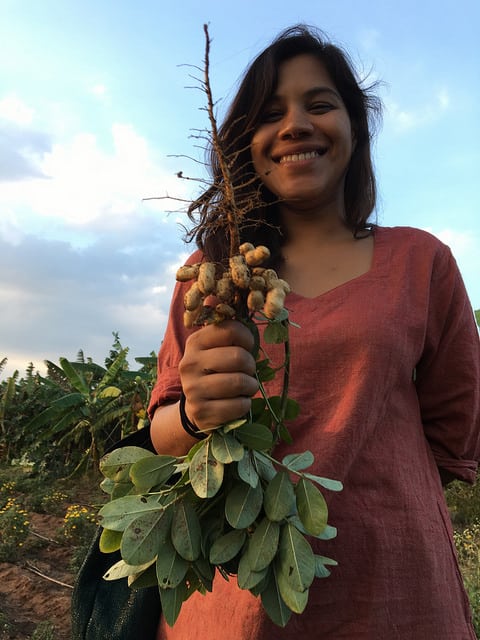 Ashlesha works with La Via Campesina and supports the work of the Amiriti Bhoomi Agroecology School in Karnataka, India.

Crop diversity and soil fertility are important fights, but not likely to prevail when they stand alone. Cash is essential. Ashlesha took me to visit two of KRRS successful entrepreneurs—brothers Ravi and Girish. Wrapped in a knee length sarong with three ash stripes and a tikka on his forehead, Ravi read from an accounting sheet. With a ruler and a blue pen, he had drawn rows and columns in which he entered costs and revenues of each crop he’d planted—nearly two dozen different varieties. Barring a windswept monsoon or an expected price drop—both quite possible—maturing eggplant and tomato plants appeared likely to yield a fistful of rupees. Interspersed papaya, guava, and mango trees would bear fruit over the coming seasons.

Girish’s plot had a higher proportion of perennials and fruit trees with fewer annual crops—and less time bent over digging with a hoe. He claimed that Ravi was the harder working brother. Both practiced a resilient (if not slightly tragic) form of climate-smart agriculture—more sustainable than buying controversial genetically modified, drought-resistant seeds. The tragedy is that hundreds of thousands of wells had been bored across the Karnataka landscape; Ravi and Girish recognize that the water table will soon sink out of reach. Their insurance is planting fruit-bearing trees whose deep roots extend into moist soil. The fruit will fetch a good market price, commensurate with the vegetable income.

In front of a wedding prayer painted on the Ravi’s wall, we dangled our legs into a sunken interior courtyard and drank tea. Ashlesha inquired about his marriage plans. “No one wants to marry a farmer,” he said. We insisted that his field was no ordinary plot—its bounty could make a wife happy. Village women aren’t inclined towards farmers, he said. India’s booming cities hold greater allure. KRRS seeks to restore the pride and viability of Karnataka’s rural communities.

Dodging cows and goats, we drove through a small village where men congregated around a moonshine shop. Ashlesha pointed to a milk chilling plant next door, a kind of a community refrigerator. Across Karnataka, farmers show up at one of thousands of chilling plants with any quantity of cow’s milk—even a liter—to sell to the state cooperative at a guaranteed, subsidized price. It’s a critical source of rural income in a world of erratic monsoons and ephemeral public programs. This dairy-based safety net, however, distorts free trade. It favors local farmers over, say, a Dutch dairy company that might want to export milk to India. In the 1990s, the government sought to outlaw artisanal mustard oil mills, opening markets for imported and industrially-produced oils. In the 2000s, the Indian government sought to open India to imported genetically-modified seeds. Milk could be next. Battling free trade policies and shoring up pro-small farmer subsidy programs are high priorities for KRRS and the Via Campesina.

Since the green revolution, hundreds of thousands of indebted Indian farmers have committed suicide. More than anything, it was this suffering that led Ashlesha to join the Via Campesina. It will take some time for Amrita Bhoomi to build a new food system. Chukki and KRRS have to resolve how to broadly distribute peasant-grown and saved seeds, how to strengthen markets for agroecologically produced food, and how to knit a coalition with farmer organizations across India. So far, however, Chukki said, “No zero-budget natural farming farmer has ever committed suicide or gone into debt.”