Photo: Volkswagen advertising in 1939 (German Federal Archives). Already at that time, Germany was planning to adopt the American model of “a car in every garage.” But car ownership seems to be becoming more and more obsolete. Sooner or later, people will have to give away their cars, closing a peculiar and unusual cycle in the history of humankind (BTW, this is the most subversive post I ever published, I think)

In a previous post,  I discussed the RethinkX report by James Arbib and Tony Seba on the future of transportation. The report discusses a technological revolution that would bring about a new concept: “Transportation as a Service” (TaaS) that will people to move mainly by using publicly available, driverless cars. Many took the report (and my comments on it) as just another technofix aimed at keeping things as they are; business as usual. Indeed, the report, framed the “TaaS” concept in terms of economic growth. Nothing else is acceptable in the public debate  today.

So, it seems that few people realized what kind of sacred cow Arbib and Seba are planning to slaughter and serve as well cooked burgers. It is nothing less than the private car, the pivotal element of the American way of life (yes, exactly what George Bush 1st said “is not negotiable”). This idea is as far from business as usual (BAU) as I can imagine, one of the most disruptive and revolutionary ideas that I came across in recent times. So, I think I can go more in depth into this subject and explain why it is so disruptive and revolutionary.

Let start from the beginning about with how the current American way of life (“one car in every garage”) came to be. It all started in 1908 with the Ford T (figure from “The Daily Signal“) 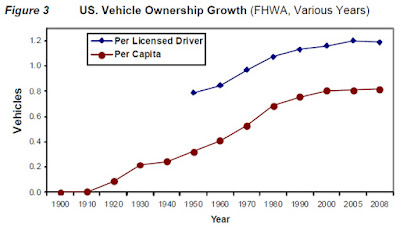 The growth in car ownership was the result of a political decision that most Western governments took at some moment (Even Adolf Hitler did, at least in part). It was a decision that didn’t have to be taken; for instance, the Soviet government always discouraged private car ownership. But governments, although not benevolent organizations, are made of people and people can recognize a good business when they see it. More cars meant more highways, more bridges, more shopping centers, more housing developments in the suburbs, and more opportunities to build things. That meant a lot of money flowing. So, the explosive development of private motorization it happened because it could happen.

But, in recent times, the trend is reversing. The number of cars per person and per household is going down. These data by Sivak (2015) seem to be the most recent ones available 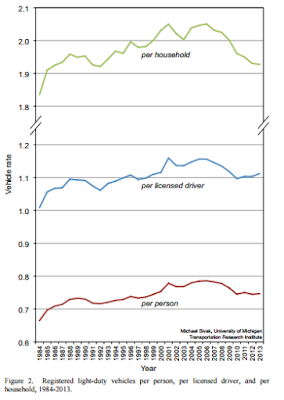 And it is not just the number of cars that’s going down, also the number of miles driven per person or per car is falling. The trend is the same in many Western countries: we went through some kind of “peak car”.
So, what’s going on? One factor is that cars are becoming more expensive (image from “The Atlantic“): 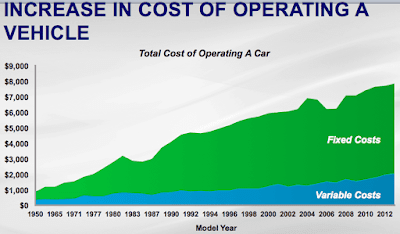 That’s mainly because cars are becoming heavier and more complicated. Today, a classic Volkswagen Beetle would cost very little, possibly less than it did at the time of the great motorization growth of the 1950s. But no insurance company would want to insure it, and no government would provide a license plate for it.

But the increasing cost of ownership is probably a minor factor in comparison to deeper changes that are taking place. The increasing social inequality that leads to a larger and larger fraction of people becoming poor or very poor. See below the behavior of the “Gini Coefficient”, a measure of the inequality in society. 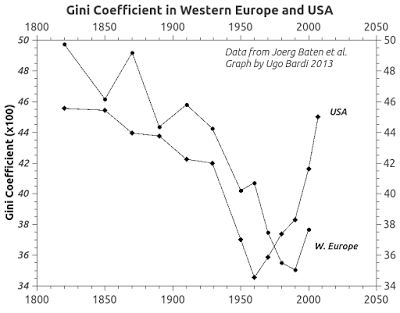 So, cars are more expensive and there are more poor people. No wonder that car ownership is going down: a gradually higher fraction of the population cannot afford cars any more.

We shouldn’t be surprised: for most of humankind’s history, most people would walk; only a few could afford horses or coaches. One car in every garage was a very peculiar phenomenon that couldn’t possibly last for a long time and that won’t probably ever be repeated in the future. But the end of the cycle may not be painless for many. If you live, or have lived, in a Western suburban area, you know what the problem is (image from Pinterest). 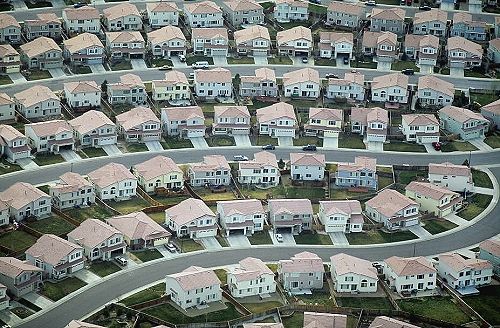 There you are: miles away from anything that’s not other people’s homes. Miles from your workplace, miles from the nearest supermarket, miles from the closest train station. No car means no job, no groceries, no place to go.

By and large, most families living in Western suburbs still own at least one car. They have to, even though that means an increasingly heavy strain to the family’s budget. But, as the current trends continue, there will come a moment in which owning a car will become a burden too heavy to carry for a non negligible fraction of the suburban population. Then what happens? Well, there are several possible ways for people to cope: biking, carpooling, using donkeys, moving to the city or, simply, going zombie and dying.

Cities are unlikely (to say the least) to establish conventional bus services for the citizens who find themselves stranded in the bloated suburbs: it would be too expensive. So, as happens in these cases, technological innovation is supposed to come to the rescue. And it does that with the concept of “TaaS” (Transportation as a Service). It is, basically, a high-tech car rental and sharing service where you use a vehicle only when you need it, thanks to the technological marvels of Global Positioning Satellites, automated driving, and electric power.

It is not obvious that TaaS will be less expensive than car ownership in terms of dollars per mile. But, with TaaS, you don’t have the fixed costs of owning a car: you can save by using it for fewer miles. So, you can use TaaS to reach your workplace (if you still have a job) and to reach a supermarket to redeem your food stamps. For the rest of the time, you stay home and watch TV or use the social media. What else do you need?

Arbib and Seba have correctly described in their report how this phenomenon is not going to be gradual: it is going to be explosive. As car ownership goes down, the cost of cars will increase simply because of diminishing economies of scale. Add to it the decreasing profits of the oil industry and the whole thing is going to implode fast, generating a textbook example of the “Seneca Cliff“.

By the end of the cycle, people (those who will survive the ordeal) will have abandoned the suburbs and moved into high-rise apartment building that can be serviced by public transportation at reasonable costs. At this point, the American landscape could look much like that of the old Soviet Union (image from Wikipedia) 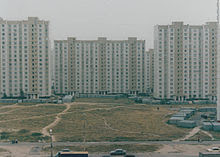 Eventually, TaaS is just an example of the concept of the idea of the “Internet of Things” that’s so fashionable nowadays. It means that you won’t own things anymore: cars or whatever. You rent them. So, your refrigerator, your TV set, even your toaster, are not your property but of the corporations leasing them to you. In this way, you use only the latest models and you don’t have to worry about maintenance. At least as long as don’t run out of credit, because, if you do, your toaster will refuse to toast your bread.

All this sounds like… well, you know what it sounds like. Would you have ever imagined that Communism would come one day to the US brought by corporations and in the name of technological progress? The “American way of life” really turns out to be negotiable.