The Romans are credited with the invention of the first smoke-free heating system in Western Europe: the hypocaust. Until recently, historians had assumed that its technology was largely lost after the collapse of the Roman Empire. In fact, however, it lived on in large parts of Europe, and was further developed into the “heat storage hypocaust”, an underground furnace on top of which granite stones would be piled, to then release hot air through vents in the floor. By this means, a room could be kept warm for days with just one firing of the hypocaust’s furnace.

Hypocausts were heating systems that distributed the heat from an underground fire throughout a space beneath the floor. The heat was absorbed by the floor and then radiated into the room above. The effect on thermal comfort must have been similar to that of a modern-day hot water or electricity-based radiant floor heating system. The Roman hypocaust was characterised by its under-floor flue passages, created by small pillars bearing the floor’s paving slabs. Sometimes, the heat was also fed through cavities in the walls before escaping from the building, thereby warming up the walls, too.

The Romans were not the first to develop a heating system in which the heat from a fire was fed under the floor from one side of a room to the other. The Chinese kang and dikang, the Korean ondol and the Afghan tawakhaneh were based on similar principles and date back to even earlier times. What’s more, the Romans probably learned the technology from the Greeks. Nevertheless, it was the Romans who developed the hypocaust into a more sophisticated heating system, especially in their public bath houses, which were built all across Europe and around the Mediterranean. 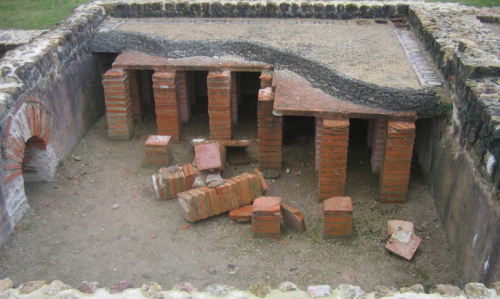 For a long time, historians believed that the fall of the Roman Empire in around 500 AD marked the start of a hiatus in Europe’s use of smoke-free heating. Nevertheless, although most public baths fell into disrepair in the Western Roman Empire, hypocausts continued to be built and used in the Early Middles Ages, especially in monasteries. The technology also lived on in the Eastern Roman (Byzantine) Empire and was adopted in the hammams of the Arabs, who reintroduced the hypocaust to Western Europe when they built the Alhambra palace in the 13th century. [1]

Smaller and cheaper systems, using ducts instead of pillars, also continued to be used, especially in smaller buildings. These hypocausts only heated part of the floor, but were much easier to build. We found just such a hypocaust in a remote village in Spain, which is still in use today.

With the spread of Christianity and its monasteries to Northern Europe, the Roman hypocaust proved too inefficient for the region’s colder climes. The first half of the 14th century, or possibly even earlier, saw the start of the practice of piling up granite stones on the top of the furnace vault to accumulate heat. [1, 2] Far from a simplified medieval imitation, the heat storage hypocaust represented a further stage in the development of this ancient technology. [3]

Unlike the Roman hypocaust, which was based on radiant heating, the heat storage hypocaust provided convective heating. The room to be heated featured a perforated “hot plate” above the pile of granite stones. Its perforations remained closed while the fire was burning, so that the smoke was kept out of the room and could escape through the chimney or a cavity in the wall. When the firing was complete and the furnace had been cleaned, the smoke flue was closed by means of a damper, the vents in the hot plate were opened and hot air rose from the pile of stones into the room. [2, 3] 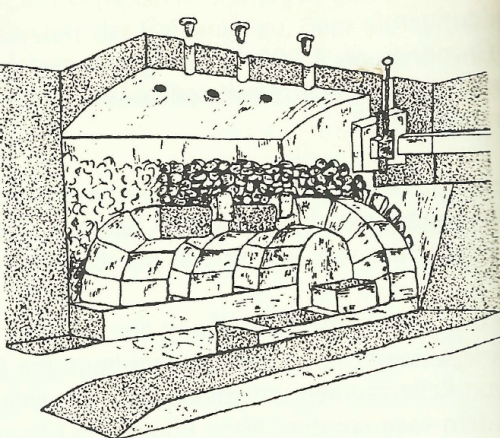 Air vents in the floor of the Malbork castle in Poland. Picture: Robert Young. The hot air vents were usually round in shape and 10 to 12 cm in diameter.

Because of their poor heat storage capacity, Roman hypocausts had to be fired continuously. Adding a stone chamber to create the heat storage hypocaust made it easier to accumulate heat, meaning it was no longer necessary to keep the furnace constantly lit. In 1822, a number of experiments were conducted to establish the effectiveness of a then 400 year-old heat storage hypocaust in Poland’s Malbork Castle. One such experiment involved heating the castle’s 850 square-metre banqueting hall. [1-3]

On 3 April, a cold furnace was lit for three and a half hours using 0.7 cubic metres of spruce wood. When the vents in the hot plate were opened, hot (200 ºC) air rushed into the banqueting hall, raising its temperature from 6 to 22.5°C in just 20 minutes. The air vents were then closed. By the following morning (4 April), the room’s air temperature had fallen to 14°C. The air vents were opened and the temperature rose to 19°C in one hour–without any additional fire being lit.

On 5 April, the temperature of the air escaping through the vents was 94°C and the room temperature rose from 10 to 16°C in half an hour. On 6 April, three days after the fire was extinguished, the air was still hot enough to raise the room’s temperature from 10 to 12°C. Even on 9 April, a full six days later, the warm (46°C) air rising from the vents managed to lift the temperature in the hall from 8 to 10°C.

During his 1438 trip through Europe, the Spanish traveller Pero Tafur wrote that people placed “seats above the holes, also with holes in them. The people then sit down on those seats and unstop the holes and the heat rises between the legs to each one”. [3] This is reminiscent of the footstoves used in Northern Europe during the Middle Ages. 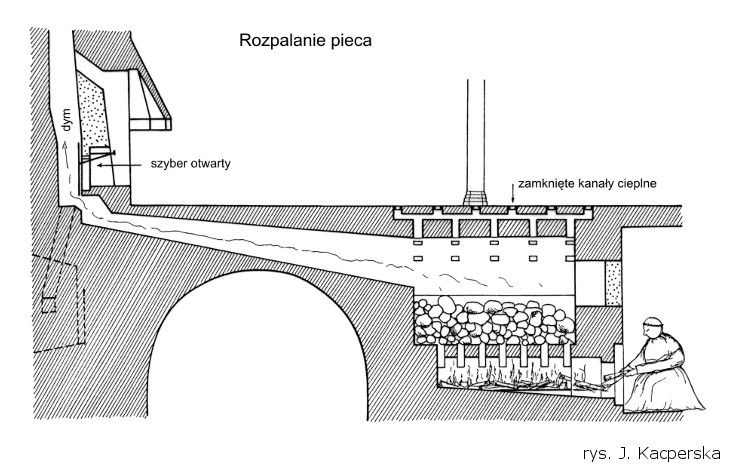 Above: The heat storage hypocaust in the Malbork castle in Poland. Source: J. Kacperska. The heat storage hypocaust was mainly used in the Baltic Region–Northern Germany, Denmark, Sweden, Finland, Estonia, Latvia, Lithuania, and Poland. To a lesser extent, they have been found further to the south and east, in places such as Western and Southern Germany, Switzerland, Austria, the Czech Republic, Hungary and Russia. Most were built in the 1400s and 1500s. [1]

In total, around 500 heat storage hypocausts have now been documented in the Baltic Region and, according to the latest estimates, there must have been at least 800-1,000 of them by the end of the 15th century [1], their use spreading from monasteries and castles to other public buildings, such as almshouses, town halls, guildhalls and hospitals. In Old Livonia, which covered present-day Estonia and Latvia, the technology also found its way into private homes. In Tallinn, Estonia’s capital, a heat storage hypocaust was not the exception, but the rule, and at least 54 such systems have been discovered there. [2]

Andres Tvauri’s overview of the heat storage hypocaust in Estonia, one of the few available resources in English language, provides a wealth of technical details. Special covers or plugs, made of metal, stone or fired clay, were made to seal the hot air vents in the floor’s “hot plates”. Small ceramic dishes have been found, placed on the hot stones directly under these venting holes. It is assumed that water was poured on them, to produce steam and thereby increase the air humidity level. [2] 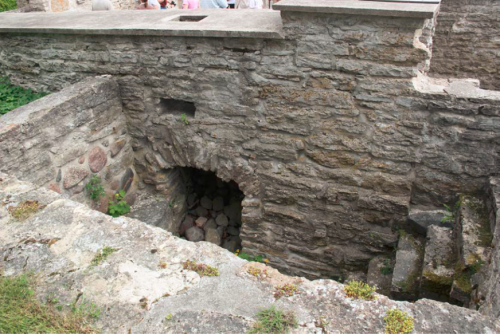 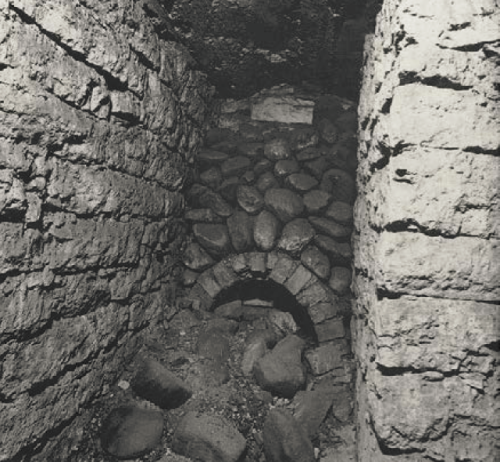 Remains of heat storage hypocausts in Tallinn, Estonia. Source: [5] Kaarel Truu, 2016. In Tallinn’s homes, the subterranean stoker’s room of the hypocaust and the heated bedroom on the ground floor were usually connected by a flight of stairs.

The furnace was covered with a barrel vault on which the stones, with diameters of 40 to 50 cm, were piled to accumulate heat. The vault’s bricks were laid to form three or four arches, with intervals of about 20 cm between them and medieval builders probably used an old vat in helping to shape the arches of the vault. When the furnace was completed, a fire was built in the vat.

A furnace’s dimensions would depend on the size of the room to be heated. In private homes, where only the bedroom was heated, it would be one to two metres long, a little more than a metre wide and 50 to 60 cm high. In public buildings and monasteries, where large halls and rooms had to be heated, the furnaces would be much larger.

Heat storage hypocausts were only used for a fairly short period of time. By the fifteenth century, glazed tile stoves were already spreading through the Baltic countries. The tile stove is a radiant heating system with an interior maze of brick or stone channels designed to accumulate a fire’s heat. It was more convenient to use and to build than the hypocaust, not to mention more energy efficient, as it takes less energy to heat people than to heat spaces.

Although it was possible to heat at least two separate rooms by means of one furnace, as a rule, the hypocaust was located under the heated room or rooms, which were always on the ground floor. Tile stoves could be built anywhere, even on a building’s upper floors. Over the course of the 16th century, Old Livonia stopped using the heat storage hypocaust, which was replaced by a glazed tile stove, often built exactly where the hypocaust’s furnace had previously stood. Elsewhere, in Poland for example, some heat storage hypocausts remained in use until the 18th and 19th centuries.