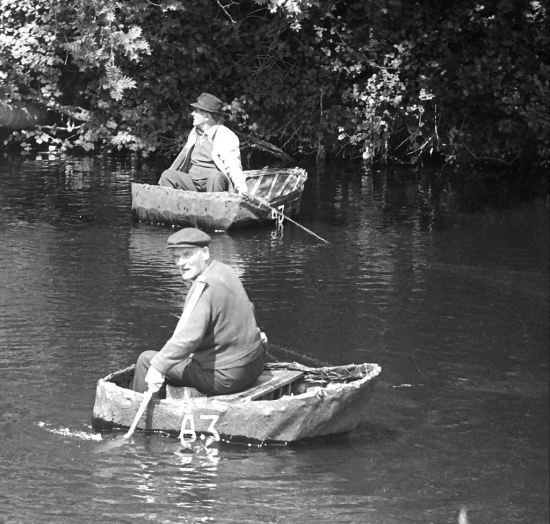 Under the green and rolling hills of Scotland, a dozen kilometres from the seaside, several people lay buried for four thousand years. Around them lay what we guess to be their keepsakes; beads, a bronze knife, tools and a battle-axe. Most interesting, though, was that at least one of them – a teenager when he died, curled up like a baby – lay in what was guessed to be a wicker coracle, like those used on these islands into the 20th century. He was buried in his boat.

Stop and consider a few things about this. First its antiquity: Before the Ancient Greeks or the Hebrew prophets, before all but the earliest pyramids, there were Scots, or at least people of Scotland. Also, you don’t see boat-burials every day; perhaps it was the youth’s most prized possession, like someone today might be buried in their Rolls-Royce. Finally, consider this was a giant basket, woven together by hand, and that it carried people safely across vast stretches of cold water. (1)

That’s not as strange as it sounds; humans around the world, whether jungle tribes or Eskimos, whether in the Stone Age or the Industrial Revolution, used similar woven boats. Who first thought of it we don’t know; the first basket fragments we have were about 13,000 years old, but we have circumstantial evidence that humans might have been weaving baskets the size of boats almost four hundred centuries earlier. Not four hundred years, by the way – four hundred centuries.

You see, early humans first appeared in Australia about 50,000 years ago, and even with the ice age lowering sea levels, you still can’t walk there. To get there from Asia (presumably, because anything else would be even stranger) they would have had to set out on the ocean — whole families in boats, not knowing if there was land out there. Obviously they floated on something, and we know of no other kind of boat-making technology for tens of thousands of years to come. Even if they only lashed logs together to make rafts, as you see in so many castaway films, they would have had to use the similar technology of weaving fibres together to make knots.

In the centuries since, cultures around the world wove boats: Tibetans floated in Ku-Drus of woven wood and yak-skin, Eskimos lashed sealskin around their long umiaks, Arabs traversed the Tigris and Euphrates in quffahs, and the Celts of the British Isles – Irish, Scots and Welsh — had an amazing variety of coracles for fresh waters and curraghs for the sea.

Most were woven from some local pliable wood – although Eskimos used sometimes used bones — then covered with some kind of skin, and finally waterproofed in some way. They were often rounder in flat water, like the Irish coracles, and more oval or pointed in running or sea waters, like the Irish curraghs or Eskimo kayaks. They also tended to be alarmingly tiny crafts, often just big enough for one – although a traveller to Iraq in the 1930s reported seeing woven boats large enough to carry several human passengers and a few horses. (2)

Coracles in particular had the basic shape of a bowl, and its users needed substantial practice to avoid tipping over. The advantage, however, was that once the user reached shore, the small and lightweight craft could be lifted and carried on one’s back. An English poet in the 1600s described “salmon-fishers moist, their leather boats begin to hoist,” looking like turtles as they walked away from the water carrying their boats upside-down across the countryside. (3)

On these islands coracles and curraghs were used from ancient times – the ancient Welsh myth cycle the Mabinogion mentions them, as did Julius Caesar on his trip to Britain. Irish monks like St. Columba in the sixth century travelled around isolated islands in a hide-bound boat, and Hector Boece’s 1527 history of Scotland describes their frequent use of coracles:

How be it, the Highlanders have both the writings and language they had before, more ingenious than any other people. How may there be any greater ingenuity than to make any boat of any bull-hide, bound with nothing but wands? This boat is called a curragh, and with it they fish salmon … and when they have done their fishing they bear it to another place on their back as they please.

Fishing was not just a pastime for such people, but a matter of survival; the protein they brought in was precious, especially in Catholic countries where meat was forbidden part of the year. Another common use was to gather fish and eel traps from rivers and lobster pots from the sea – also, of course, woven of wood like baskets. The traps operated on a simple principle; a bit of bait could lure an animal into the trap but, if it were shaped properly, they would be unable to escape.

Coracles also proved useful in other ways; when shepherds washed their sheep, for example, coracle-men positioned themselves downstream to catch any sheep that might be carried away. And, of course, they offered simple transportation across a landscape lined with lakes, rivers and canals, and among many islands separated by the sea.

Each region had its own design – not just region as in “Europe,” but as in each local village or stream; small Welsh rivers like the Teifi, the Taf, the Wye, the Monnow, the Lugg, the Usk, the Dee and the Severn each had their own styles of coracles, each apparently made for the conditions of that place. (4)

Irish coracles and curraghs were woven from willow or hazel, and typically built upside-down. Locals here began by planting a row of hazel rods straight into the ground, continuing in a wide curve until the row came back to where it began. Then, when the rods looked like the bars of a large cage, they wove withies – thin strips of wood – back and forth between the rods along the ground. This would be the gunwale – the “rim” of the boat – when it was flipped over.

Then the hazel rods — the bars of the cage, as it were — were bent down across the oval to make a wicker dome, until the whole structure formed a large, solid basket. Then a covering was lashed to the frame – cow-hide was typical, although horse-hide and seal-skin were also used. Finally, the cover was waterproofed – in recent years with tar or some other petroleum derivative, but originally with tallow or butter.

Such ingenious craft opened up new industries, crafts and food sources for ordinary hunters or farmers, allowing them to traverse lakes and rivers easily and travel between islands. They allowed people on islands or in remote areas communicate and trade with the rest of the world. They let people create their own craft for the unique conditions of their place, with nothing more than local resources, knives and skill. In short, for tens of thousands of years human survival depended on such small and unlikely-looking creations.

running of time to save planet; enormous immediate action required; maybe begin with issue too often ignored; serious cut back on consumption; stopping buying things one already has or ...