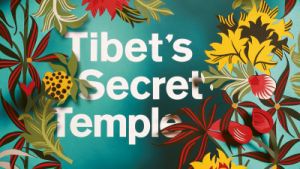 Last week I visited an amazing exhibition at the Wellcome Collection in London called The Secret Temple: Body, Mind and Meditation in Tantric Buddhism, (it’s on until February 28th). The exhibition is a celebration of the Lukhang, a temple close to Lhasa’s Potala Palace which was conceived by the fifth Dalai Lama and built by the sixth, a private meditation temple which showcased, in its extraordinary murals, ancient, esoteric and once secret practices central to tantric Tibetan Buddhism.

To step from the busy streets of the Euston Road into the quiet of the gallery felt, in itself, like stepping into a temple.  The first thing you see is a beautiful film about the Lukhang.  The story goes that during the construction of the Potala, the fifth Dalai Lama dreamt that the local spirits or nagas were upset by the amount of earth moving the construction necessitated, and so he promised to build a temple in a lake to pacify them.  Here is the film that greets you when you first arrive:

In the end he died before work could start, the sixth Dalai Lama finally building it. The Lukhang was only reachable until recently by boat, and it features some of the most exquisite Tibetan art and wall painting.  The current Dalai Lama, it is revealed at one point in the exhibition, never actually got to set foot inside the Lukhang, as he had to flee Tibet before he got the opportunity, but remembered as a child looking longingly at its roof from the windows of the Potala and wondering what it was like inside. 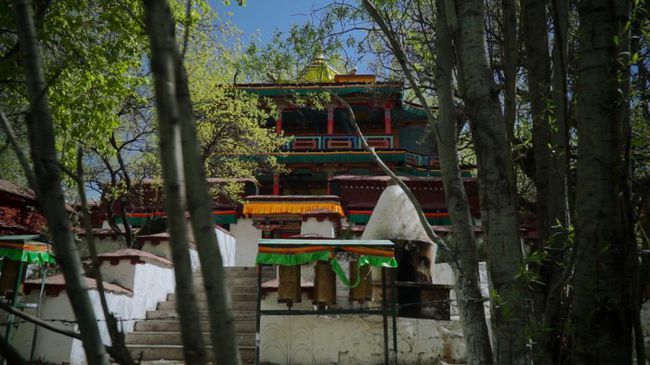 The exhibition uses the temple as the starting off place for an exploration of Tibetan Buddhist yogic and meditational practice, and the remarkable system they developed for creating physical and mental wellbeing.  Beautiful statues, paintings, archive footage of lama dances in a monastery near Mount Everest filmed in the 1930s, along with commentaries from a Tibetan lama that adds insight and depth to what you’re seeing.  One section takes you into the imagery of Tibetan tantra, of wrathful deities, flaming protector deities, and lots of skulls.

The centrepiece of the exhibition is three life-sized digital versions of murals from inside the Lukhang.  Absolutely beautiful, lit from behind, in a darkened room, they capture an incredible civilisation and practices designed to develop and deepen compassion which were developed over many centuries. 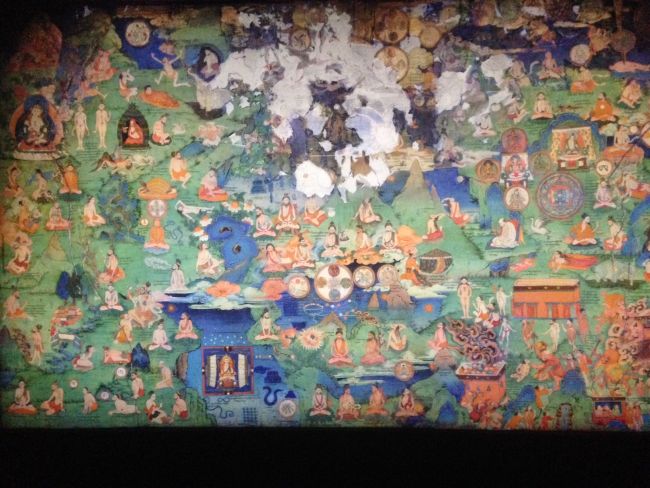 While the exhibition itself was beautiful, fascinating and an absorbing immersion in an extraordinary, and much-endangered culture, the highlight for me came at the end.  The final room featured a large screen showing a video which featured a couple of academics from leading universities both in the UK and in the US, the Tibetan lama whose commentaries had accompanied us through the exhibition, and the head teacher of a school in the UK which teaches mindfulness throughout its curriculum.

In the video, they discuss compassion, and the emerging body of science around it.  They talk about how, in neuroscience, in the study of neuroplasticity, the practice of mindfulness and compassion has been shown to have huge benefits.  One researcher talked about taking a random sample of people, teaching them a simple compassion practice which they then did for two weeks at which point they were then tested again, the results being that many benefits were discovered.  Research now shows that being more compassionate results in us being happier, more attractive ("kindness" is the key quality people look for on dating sites), boosts our health and longevity, spreads to those around us, leads to more pro-environmental behaviour and leads to our feeling like we have more time in our lives.  The head teacher talked about the amazing impacts she noted mindfulness practice having on kids at her school, on their school performance, confidence, and ability to be still and quiet.

At this point I was struck by the thought that here we had a culture that isolated itself from the rest of the world and spent over 1,000 years as a Silicon Valley research laboratory into the science of compassion, a Hadron Collider for mindfulness.  Its whole culture was repurposed from being the region’s most feared warrior nations to being a nation of monks, nuns, temples, deep reflection and study. 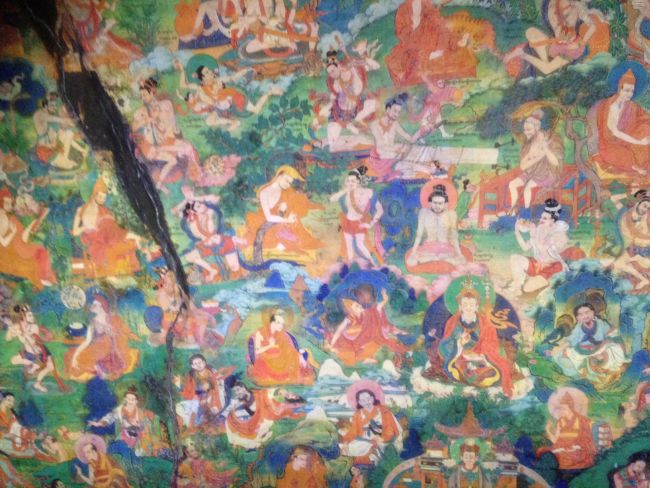 I thought about how, in our current obsession with economic growth, so much is made of how important it is for businesses to be exporting (the UK seeks to double its exports by 2020), to be seeking markets elsewhere.  While the UK, for example, exports some good things: culture; design; music; films; it also exports food that could just as easily have been consumed here, as well as torture equipment; tanks; missiles; bombs; money to off-shore tax havens.

I sometimes remark that Transition may turn out to have been the key export of Totnes when history looks back at these times. As I walked back out on to the Euston Road and headed for the Tube, I wondered how different a world we would have if we, like the Tibetans, measured our success in the world not by the amount of stuff we export, but rather by the qualities and the ideas that we export.  By choosing to live more simply, more kindly, more compassionately, while such an approach would inevitably reduce our physical exports, we need to bear in mind that we would end up exporting something far more important, long-lasting and needed.  A national Transition would be remarkable demonstration of compassionate action, and would also turn out to be our finest export.