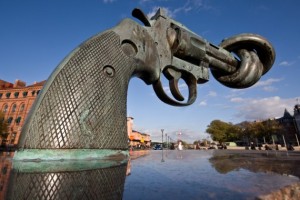 Watching the movie Selma raised the question for me of why non-violence works – or worked – as a political strategy. The obvious answer is that it reveals the violence embedded in the political system without legitimating it. Some of our most famous images of protest have this at their heart: the famous Chinese protestor sitting in front of the line of tanks in Tianamen Square, or the American anti-Vietnam War protestor presenting flowers to the unsmiling ranks of the National Guard. And the “obvious” answer begs more questions. if this is true, why should it be true? And if it was true in the past, is it still true? It may be that the moment when it worked has passed. No obvious spoilers, by the way.

The monopoly on violence

So let’s start with Selma, and for the purposes of this post I’m going to largely put to one side the arguments about whether Lyndon Johnson was misrepresented in the movie (though he clearly was) and the copyright curiosity that speeches given by Martin Luther King in public places are apparently owned by Steven Spielberg.

Part of the story lies in the fact that in the modern state, the state has a monopoly on violence, as Weber observed. And clearly, one of the things that non-violent protest does, at least when met with violence by state representatives, is to call into question the legitimacy of the purposes to which that state violence is being put.

The alternative is a world in which protestors challenge the state with violence. Immediately official violence becomes justified – precisely because the state has a monopoly on violence. And so when one looks back over the arguments about the Bloody Sunday demonstration in Derry, when 14 demonstrators were killed by British Army soldiers, part of the Army’s defence (though given short shrift in the Savile Inquiry) was that it had been fired on by IRA gunmen.

On its own, though, non-violence isn’t quite enough. It needs some more elements. 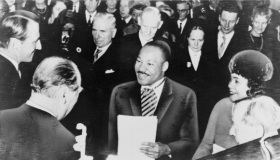 So let’s go back to Selma. As is well known, and as the film was made clear, Selma was chosen for the voting rights campaign precisely because it had a sherriff who who could be counted on to over-react in the face of black protestors demanding that they be allowed to register to vote. (The previous campaign, in Albany, Georgia, had failed because the Sherriff was subtle in his response to the protests.)

By 1964, Martin Luther King was famous enough to be able to command media attention, already a winner of the Nobel Peace Prize, and this is represented in the film by the presence of the New York Times correspondent and later the live CBS coverage of the protest on the bridge.

The demand was simple: the the right to vote, part of the US Constitution, should not be blocked by the devices and stratagems of county-level officials. And there’s an echo here of the earlier Freedom Rider protests, where the protestors were clear that all they were asking for was that the Attorney General of the United States enforced Federal law.

The political process was open to persuasion. The actual story of the exchanges between LBJ and Martin Luther King is that Johnson wanted to bring a voting bill to Congress, but he needed non-violent protests to be staged, and seen in American media, because the clamour would give him the leeway to push through the legislation.

And King had people who willing to be hurt in the pursuit of the vote, although one of the memorable elements of the film is the way it portrays his discomfort with putting protesters in the firing line, sometimes literally.

To some extent, then, non-violence is a product of the media age, although it doesn’t necessarily require television. Gandhi’s salt march succeeded on the strength of newspaper coverage, as they exposed the particular economic interest of the British Raj in India and the costs it imposed on Indians.

‘An entire army down there’ 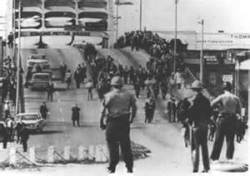 The reason that violence works less well are portrayed well in Selma, in a couple of different places. The first is after the attack by State troopers on the bridge, when one of the protestors says he’s going to go home and get his gun. One of the organisers counsels against:

How many guns you think they got down there? That’s an entire army down there. What you got? A couple of .32s? A .38? … And how many of us you think they gonna kill in retaliation? With their 12-gauge pump-actions, their Colt automatics, their Remingtons, their helicopters, their tanks! We won’t win that way, and I ain’t talking about the Bible. … I am talking facts. Cold, hard facts!

The later march to Montgomery, protected by National Guard troops, evokes this when you see a helicopter overhead, protecting the marchers.

The second moment is when King sits down with members of SNCC, the younger black movement that is getting impatient with non-violence. SNCC eventually splintered, and one of the parts became the Black Panthers, whose leaders were systematically hunted down and killed by the FBI. In the process, of course, a generation of talented political thinkers and organisers were wiped out, which must have had long-term costs for Black politics in America. As Mark Kurlansky writes of the Weatherman, a (largely white) group that started non-violently but became violent,

Both the movements and their enemies underst00d that if violence could be planted in a group, it would spread and eventually destroy thr movement.

In his book The Unconquerable World, Jonathan Schell is optimistic about the growth of non-violence. I’m not so sure: not because violence would be better (it wouldn’t be), but because the third condition – a functioning and responsive political system – doesn’t seem to hold any longer. In the wake of the financial crisis, political elites have become more concerned about their own survival than about the purpose of politics, and the gap between what they say and what they do, between speech and meaning, becomes wider all the time. 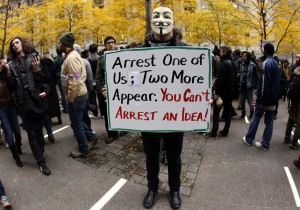 So, for example, the Oakland cop who pepper sprayed a student protestor at close quarters has not been disciplined, although the footage circulated widely and he acted outside of the regulations. During Occupy Wall Street, much of the violence was done off camera. As David Graeber remarks, police routinely broke the fingers or even wrists of protestors.

‘Laws for the 21st century’

In Britain, the Metropolitan Police is trying to prevent peaceful protest by declining to police demonstrations, trying to throw security costs onto the organisers, although London’s politicians have so far told them to do it. (This may actually be a dispute about budget cuts rather than a political response.)

In Spain, where activists have been successful in delaying and preventing foreclosures through non-violent protests and monitoring, the right of centre PP government is pushing through a law that makes such actions illegal, along with many peaceful demonstrations.

Security is justice, and justice is security, as George Orwell might have said. The theologian Helder Camara, in his short book Spiral of Violence, foresaw this situation in 1971: “

[A]uthoritarian regimes easily take control under the pretext of safeguarding the social order’ from attack by subversive elements or communists. Moreover, the press, radio and television only transmits what favours the regime and it is obvious that it will not venture to reflect liberating moral pressure.

That all sounds kind of familiar. Camara, perhaps optimistically, thought that this would be a problem only in what he called “underdeveloped” countries.

So what’s the underlying story here? There is quite a long discussion of some of this in David Graeber’s book The Utopia of Rules, in which he focuses on the nature of “structural violence” implicit in capitalist societies (p69). I’ve written before similarly that capitalism is “frozen violence.”

His book is about the role of bureaucracy in maintaining and managing the modern state, and suggests that the purpose of bureaucratic rules is to push this implicit or underlying violence into the bsckground.

And on this reading, the function of non-violence is to make visible the gap between what is said and what is done, by cutting through the public and procedural superstructure to show the explicit power relationships sitting below.

One of the big increases in employment in the last decade has been the increase in private security personnel, and this have gone hand in hand with the increasing privatisation of public space and increasing authoritarianism about access. As Graeber suggests in a flourish early on, a grad student sitting in a university library reading Foucault and thinking about the symbolic nature of violence should consider that if he’d attempted to enter the library without a student ID, he’d have been swarmed by cops. 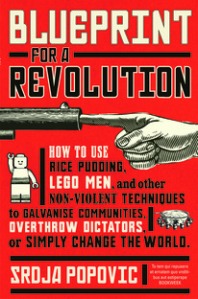 In other words, as inequality becomes more extreme, and the underlying violence keeps breaking through, the stakes become higher and the authorities become more adept at changing the law and the rules to limit protest.

But just as I was depressing myself, I picked up the recent book Blueprint for Revolution by Srdja Popovic of the Serbian group Otpor! He suggests that non-violent protest has to respond to this tightening of the political landscape with imagination and with fun: “laughter was our greatest weapon against the regime.” In the book he writes about rice pudding parties, cottage cheese boycotts, street theatre, and using ringtones to bypass rules against protests imposed by repressive authorities. As with the US Yippies in the 1960s, this new generation of non-violence becomes a form of performance – a subversion of spectacle – that cuts through the official discourse, rendering absurd the use of power.

Thanks to reading “The party is over” back in 2003, I came to realize the importance of shifting to a more endurable and real sustainable energy use and sources

Ripping Off the Plaster

The Curse of Thomas Malthus