After more than 100 years of suppressing the West’s fires, land managers and government agencies are finally warming to the idea that fire can be beneficial — and necessary — for many landscapes.

This idea is far from new among Indigenous communities in the region. For many Tribes, the use of fire to manage plant communities was common practice until it was outlawed by colonizers.

Today, as climate change increases threats of more severe and more frequent large-scale wildfires, Tribes are re-engaging with the practice of Indigenous-led fire — also referred to as cultural burning. These smaller and lower intensity burns can help replenish soil nutrients that aid native plants and restore the land.

“There’s this inherent fear of fire right now that’s totally justifiable,” says Melinda Adams, who is studying the reclamation of cultural burns as a doctoral student in the department of Native American Studies at University of California, Davis. “So what we try to do as practitioners is to work on reestablishing that good relationship, that respectful relationship, because fire is a relative too.”

The Revelator spoke with Adams about how cultural burning changes the land, why attitudes about it are shifting, and what it can do for communities.

I come from a Tribe in Arizona, and I grew up in New Mexico, and I went to a Tribal college in Lawrence, Kansas. It was in the Midwest that I started being interested in fire through research with biochar. I’ve worked with pyrolysis and making soil amendments, creating them and putting them back into the soils to regenerate some of the more highly degraded soils that we have in the Midwest due to mining or over-usage by agriculture.

I did prairie burns, which are culturally significant to Tribes in the Midwest for food, medicine and basket materials.

Now at U.C. Davis my dissertation topic concentrates on land-stewardship practices that have been created and sustained by Indigenous peoples of what we now know as the United States, and specifically in what we know as California.

I am a trained ecologist and environmental scientist. I’m studying the physical and chemical soil responses of what we’re calling “good fire” — that’s cultural fire led by Native practitioners. These burns differ from what a government agency would consider a prescribed burn or a controlled burn because they are rooted in Indigenous knowledge and practices.

Being a Native person and taking up space in scientific fields, I also am called upon to talk about colonization, land dispossession, erasure of our histories, and our lived experiences. So with cultural fire, I use that as an entry point to talk about the history of California, of Native peoples of the United States, and how we’ve always held these land stewardship tools.

Cultural fire is also more guided. In the burns that I participate in, we tend to back away from using heavy fuels or machinery. With cultural fire, there’s more time spent getting ready for the burns and cleaning up afterwards than when fire is actually on the ground. That end care is huge and it makes a big difference.

I was at one of the practitioner’s properties and I could see where people didn’t prep the piles or they used fuels, and there’s white ash that looks like the ground has been scorched. There weren’t any plants coming back on that plot.

Then 100 feet to the right, I could see a cultural burn that was prepped — where we cut the plant materials, piled it and lead the burn. Then we went in after and mixed the soils. Native plants came back on that plot.

How are attitudes about cultural burning?

Most of the ways that [federal and state] agencies are trained to work with fire is suppression. And it’s been that way for a very long time. The very first piece of California state legislature in 1850 was to remove “Indian fire” based on very skewed misconceptions about Indigenous people’s relationship to the land.

When John Muir set foot here and saw these wonderful mosaics of different plants growing together, he didn’t give credit to Indigenous peoples for stewarding those lands and maintaining that biodiversity.

The California legislature prohibited small burns or family burns, and they’ve more or less been upheld until now, when legislation [in 2022] changed that. On top of physical violence to remove us from our lands, there was also the removal of stewardship practices, land tending, water care, and relationships with relatives other than humans. All of that was removed once colonizers arrived.

Today, in the West, an increase in the amount of catastrophic wildfire has been created because of the buildup of fuel and the under-utilization of prescribed burns. We’re feeling the effects of no-burn policies that have been upheld for close to 200 years now. And with climate change, when things burn, the large-scale wildfires are emitting greenhouse gases. And it’s creating higher-risk living areas where wildfire can consume entire homes, entire communities.

But we’re seeing some change [in practices] and more inclusion of voices that haven’t had a say in decision-making before. Biden just acknowledged traditional ecological knowledge that’s supposed to be in government training and working relationships with Tribes. It also helps that we have Secretary Deb Haaland as the head of the Department of Interior, who controls the vast majority of public lands.

Where is cultural burning taking place?

I’ve been a part of these cultural burn demonstrations since 2018, and we work with Chairman Ron Goode of the North Fork Mono Tribe near what we know as the Yosemite area. I also have partnerships and friendships with the Karuk, Yurok and Hoopa Tribes that are far north in California. They’re doing some amazing cultural fire work. They’re training people in the art and the science of good fire. They’re leading the way with a lot of the knowledge building and reclamation of larger-scale cultural fire. 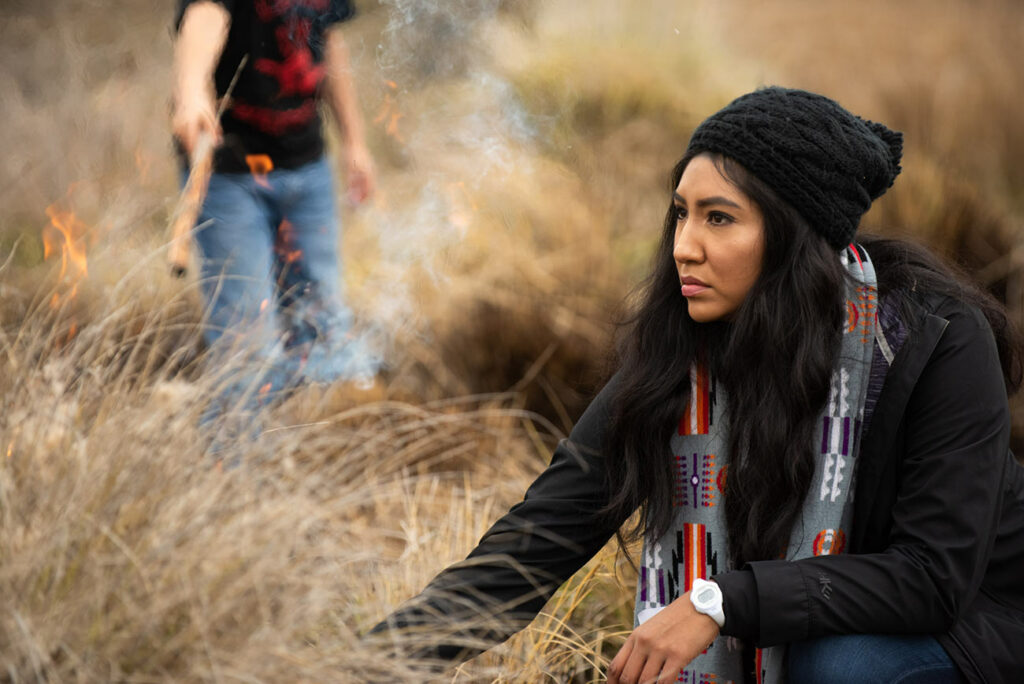 I also work at the Cache Creek Nature Preserve, which has a small section that’s called a Tending and Gathering Garden. That space came about specifically for Patwin practitioners, harvesters, traditional gatherers and Native peoples of the greater community to gather basketry materials.

It was envisioned 25 years ago by a geography student at U.C. Davis and the Native elders as a space to do cultural reclamation. The fires started to be planned and implemented more regularly when I came there in 2018.

What we’re burning is tule, a reed wetland species. It’s hollow on the inside and dry on the outside. So it’s the perfect igniter and the perfect carrier of fire. We don’t need propane and fuels. When we do our burns, we just use tule.

When we burn, it’s on an island and the water dries up [part of the year], so you can see the soil layers that these women have created — the rich, dark charred materials on the top, then some organic material underneath, and then some gray material from the water trickling in and out, and some orange from oxidation.

I love soil profiles and horizons. They’re amazing because as Native people, we’re storytellers, and you can see the story of the land if you look at the layers.

It’s also a former gravel-mining site with degraded soils that don’t hold nutrients very well. It makes it interesting to apply good fire to the space to replenish those soil nutrients. We have burned every year in that space, and I’m tracking the changes in soil and the yield in the plants.

What the practitioners who harvest these plants for basketry are seeing is that the plants are growing back taller, they’re growing back stronger, in more dense stands, and the color is more vibrant.

In addition, my qualitative data is telling me that there’s an increase of nitrogen, phosphorus, potassium — the big ones that you tend to need when you’re trying to grow anything.

I’m also measuring culturally significant plants for their aboveground yield over the course of a year. Because most of these are perennials, we’re looking at a snapshot of their regeneration.

What do you hope cultural burning can do?

The hope with this work is to rebuild our relationship with fire.

But this is also about more than fire. It’s about our time on the land and reclaiming parts of ourselves that were taken away a long time ago — and having the space to do that. The word that keeps coming up is healing. We’re healing these landscapes with fire, which is tied to water, animals and pollinators.

I’m participating in something that my ancestors did hundreds of years ago that was taken away. So that’s so powerful for me as a Native woman.

I just want people to know these are healing fires, they’re healing stewardship lessons — and not just for Native peoples. We’re privileged in the fact that it’s part of our culture, but there’s definitely space for allies, for people who are working towards improvement in our environment and the mitigation of climate change.

The practitioners that I work with are so excited to share their knowledge, their practices, their worldviews, and their time with allied scholars. This is climate hope. This is hope for our future actualized on the land and together.