This is a time of year when we have space to reflect and to make resolutions for the coming twelve months, to stop, dream and reorient ourselves. Similarly, in all the work I’ve done over the last couple of years on the importance of imagination, I keep coming back to how vitally important it is to create space for the imagination, what I call ‘What If spaces’, whether in our own lives, our organisations or our communities. In this article, I want to share some examples of what this can unlock, and some thoughts from people doing this work on the ground on how to do it well.

One great example of a successful What If space is the work of ‘Think and Do’ in Camden in London. Think and Do grew out of the work of Camden Council in organising one of the UK’s first Citizens’ Assembly on Climate Change, in July 2019, the first output from their declaration of a climate emergency a few months earlier. One of the Assembly’s 17 recommendations was the creation of community hubs and spaces for reimagining Camden. Together with Transition Kentish Town, XR Camden, Camden Greenpeace and others, a former café on the High Street was taken over to become the first Think and Do space. 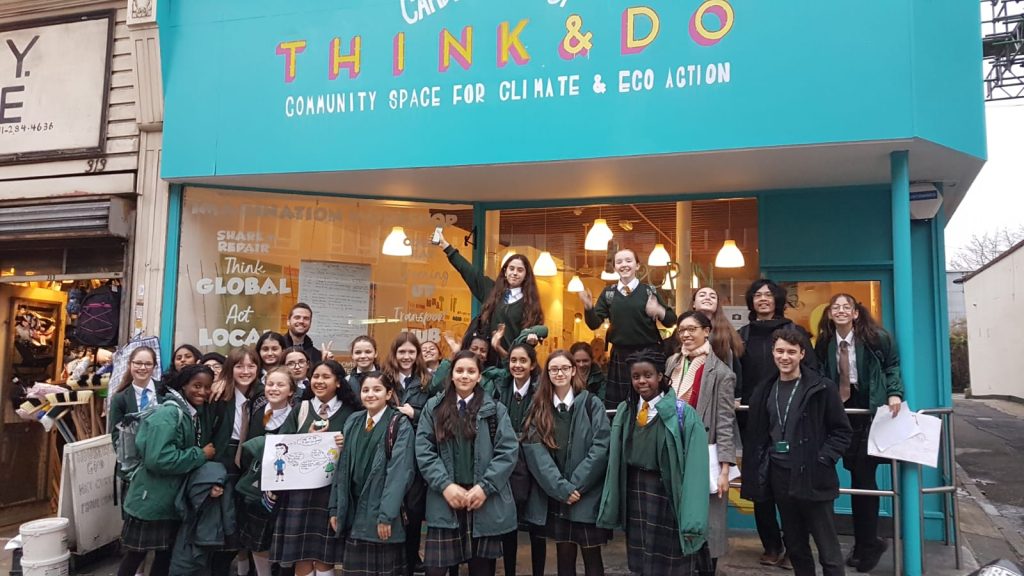 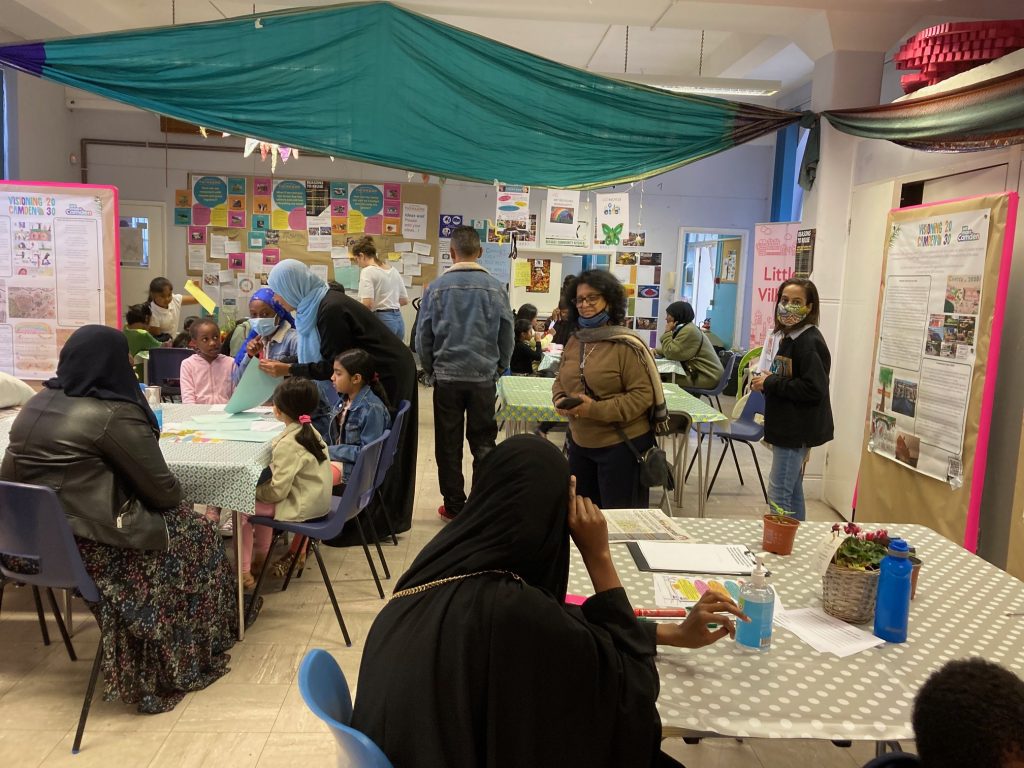 Camden Think & Do created a pop up space in a high street shop and sought to unlock the community’s collective imagination about the future of their area through activities, school and group visits, drop in sessions with tea and cake or lunch and ideas boards.

“to create a community ecosystem that is resilient and responsive to climate and social injustice, to find and implement creative solutions to challenges identified at a community level and respond to them collectively”.

The walls were covered with invitations to share hopes, fears, What If questions and stories from 2030. It hosted skills shares, clothes swaps, workshops, hackathons, often several different things at once! A teacher who brought a group of 30 boys to a session on tax evasion said he had “never seen them so engaged”.

For insurance reasons, two members of Camden Council staff needed to be on site. It turned out many of them had never met before, and they loved connecting with the public as well as with colleagues. The High Street version of Think and Do ran for a few months, and then Covid arrived and much of the group’s work went online. Once the worst of Covid was past, the group started thinking about their next moves.

They were aware that throughout Camden were a number of Tenant Resident Association (TRA) halls, often built as part of housing estates, and often very underused. “What if”, the group asked themselves, “TRA halls became vibrant community hubs?” They started in the hall in Somers Town, a large estate in Camden, running a two-week pop up where everything was translated into several different languages spoken on the estate. They created a safe space, with activities, and offered food from the Refugee Community Kitchen. Everything was free.

In February 2022 they moved to Goldington TRA hall, working mainly with Bengali women, around the theme of sharing, with the women shaping the activities. They’ve held jewellery workshops, ‘crafternoons’, anti-bullying workshops, workshops on climate change and social action. Sometimes the Council got involved, such as with the Energy Savers’ Club which came out of the sessions and which is training women from the estate to be energy champions, going door to door to help people reduce their energy use. 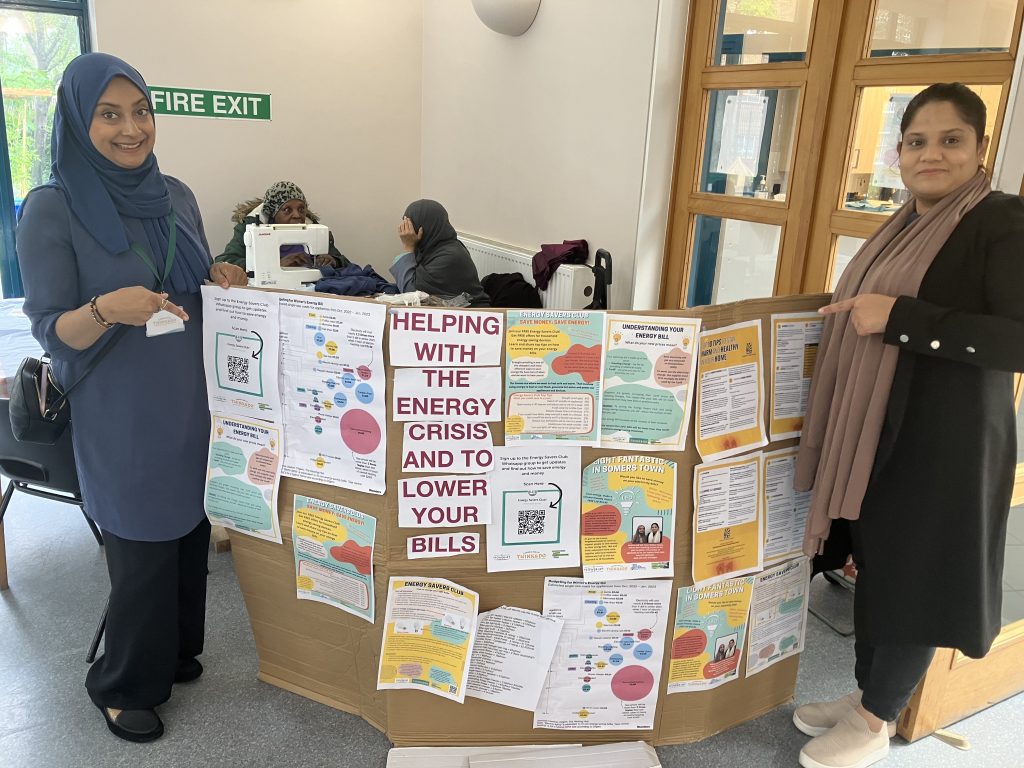 Local women trained as energy advisors to help people address the cost of living crisis, in a project which emerged from Think & Do’s pop up spaces in Tenant Resident Halls.

Some of their funding comes from asking local businesses for support, an approach that has been very successful. Some money comes from foundations too. It’s beautiful to hear the stories of ideas that emerged as What If questions in the original Think and Do which have since become a reality. One of the ideas someone wrote on the wall was a ‘Camden Forest’ of ‘2025 trees by 2025’. Bare whips were obtained, often free of charge, and distributed to people who wanted to plant trees, supported by Tree Guardians on the estate who taught people how to look after them. The target of 2025 trees was already passed, in 2022! They persuaded Camden Council to change their rules to also allow trees in pots on balconies and walkways, further expanding the forest.

I asked Debbie Bourne and Ellie Bryant of Think and Do for their tips for other people wanting to do the same kind of thing. Their suggestions were to…

One beautiful recent spin-off from the work of Think and Do has been Camden Council asking Phoebe Tickell to run an eight-week ‘Imagination Activist’ training for 30 members of staff at the Council. The first iteration of the course ended in November and it’s already being planned again for 2023 with senior management. Its aim is to create Imagination Activists throughout the organisation, a beautiful example of how this thinking is spreading. 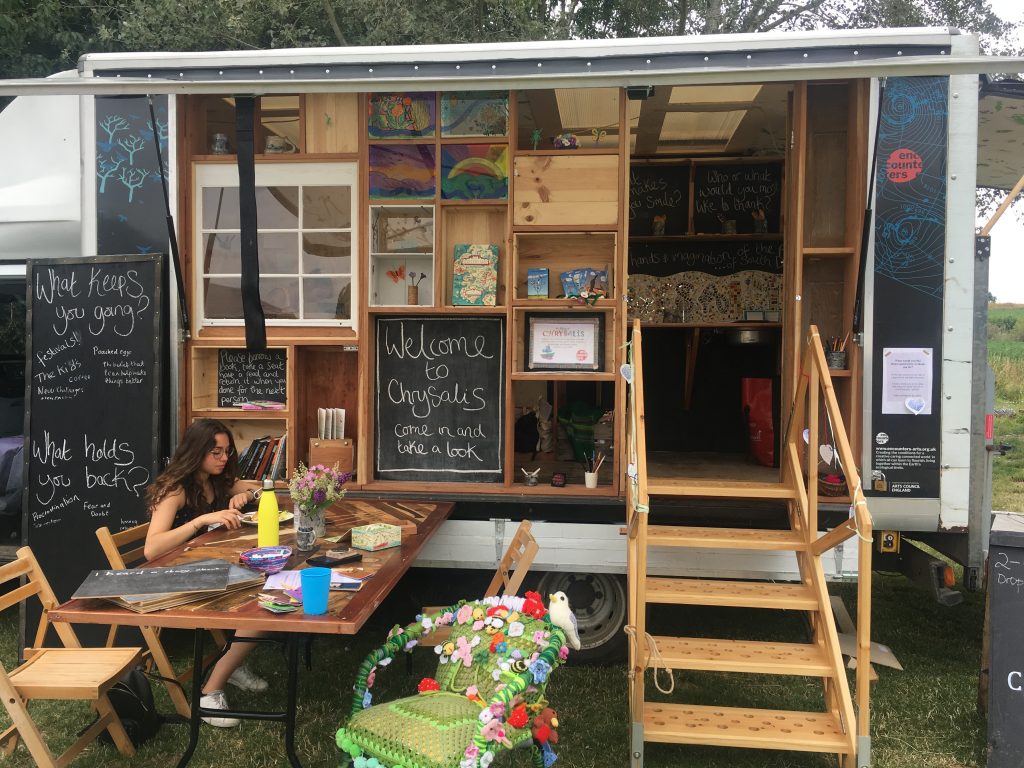 A mobile community imagination space created by artist Ruth Ben-Tovim, who developed ‘The Art of Invitation’ with Lucy Neal, a training course in using creative approaches to engage your community.

There are a number of great approaches that you can draw from if you choose to design your community What If space. There’s the amazing New Constellations process. There’s the Encounters Shops model used so brilliantly by Transition Town Tooting. I’d also really recommend ‘The Art of Invitation’ training run by Ruth Ben-Tovim and Lucy Neal, keep an eye out for when it’s next running. There’s the Forest of Imagination in Bath, useful guides from Fun Palaces, the work of Civic Square in Birmingham, and the fabulous Cambridge Curiosity and Imagination. And in Bologna there is the Civic Imagination Office, an award-winning example of putting imagination at the heart of local government. Transition Town Totnes ran an event called ‘Totnes Declares Climate Emergency: What Next?’ just before Covid, an event they wrote up brilliantly so that anyone can use it.

A smaller version of a What If space was recently created in Cambridge by Hilary Cox Condron, a local artist and County Councillor, whose work focuses on social change and storytelling. She has so far run three ‘Imaginarium’ events in collaboration with Cambridge Carbon Footprint: the first one at Cambridge University as part of the Cambridge Festival; another at the Our Place In Space festival on Midsummer Common and the most recent one, in October as part of the Festival of Social Science, in an empty unit in the Grafton Centre shopping arcade (hear her talking about it on local radio here). It was designed to be a provocative space, colourful, with graphics and words, not intimidating, but rather inviting people to be playful and imaginative. People were invited to be part of conversations, to make placards, maps setting out how the city could look in the future. 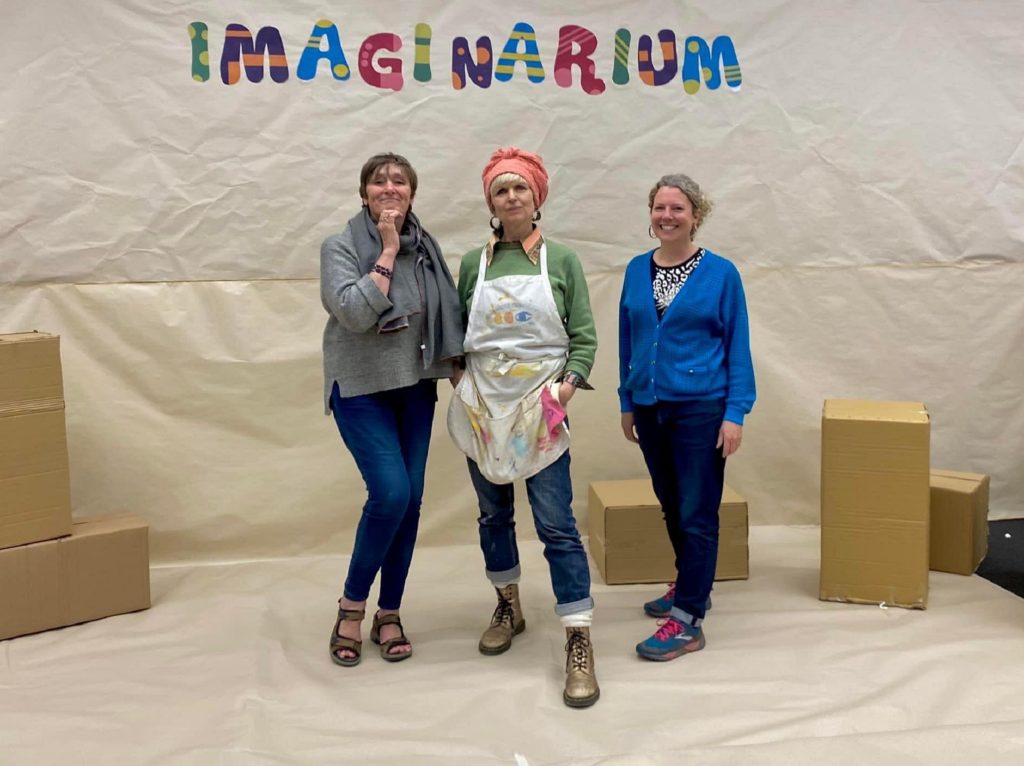 Before: Artist Hilary Cox Condron and friends prepare to unleash the community’s imagination into the Cambridge Imaginarium

After: Crowdsourced imagination fills the imaginarium space, with cardboard models, drawings and ideas captured on an alternative map of the city

The location was important. Hilary was fed up being told certain communities in the city were ‘hard to reach’, but setting up in a shopping centre broke down barriers, with hundreds of people coming into the space on the day the Imaginarium was open. As a Councillor, for Hilary, the firsthand testimonies she gathered through this process are invaluable in policy-making and supporting bodies like the Communities, Social Mobility and Inclusion committee of which she is Vice-Chair. I asked Hilary what would be her key ingredients for a successful Imaginarium. She told me:

So get to it! Create your own! Share your story! Now, more than ever, we need imagination spaces up and down the land. We’d love to hear how it goes. 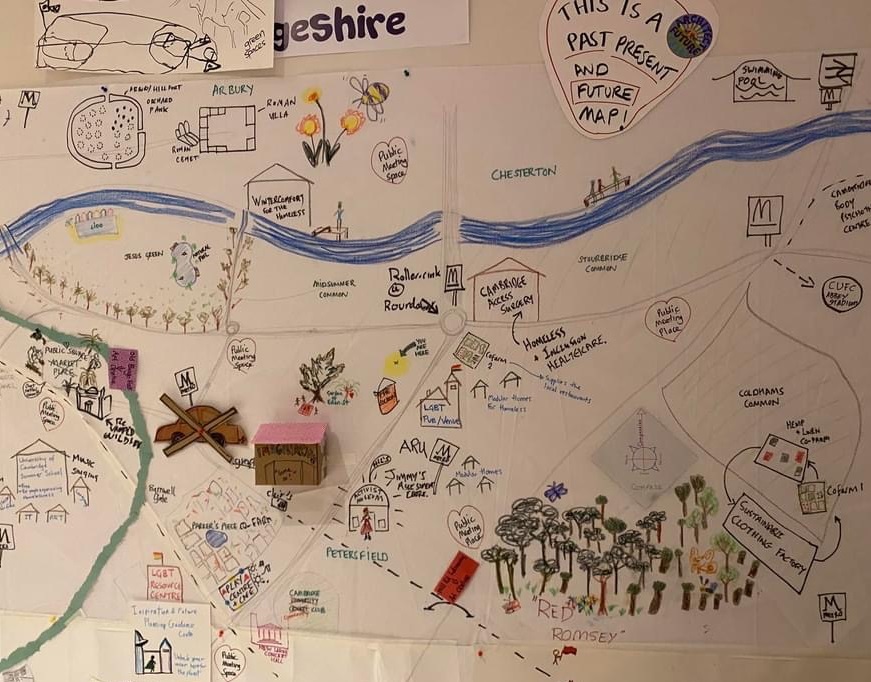 A 3D map of Cambridge’s reimagined future created at the Imaginarium, including new forests, a farm, a metro system and public spaces.