CHICAGO — Indigenous people in the Amazon may have been deliberately creating fertile soil for farming for thousands of years.

At archaeological sites across the Amazon River basin, mysterious patches of unusually fertile soil dot the landscape. Scientists have long debated the origin of this “dark earth,” which is darker in color than surrounding soils and richer in carbon.

Now, researchers have shown that indigenous Kuikuro people in southeastern Brazil intentionally create similar soil around their villages. The finding, presented December 16 at the American Geophysical Union meeting, adds evidence to the idea that long-ago Amazonians deliberately manufactured such soil too.

The fact that Kuikuro people make dark earth today is a “pretty strong argument” that people were also making it in the past, says Paul Baker, a geochemist at Duke University who was not involved in the research.

In doing so, these early inhabitants may have inadvertently stored massive quantities of carbon in the soil, says study presenter Taylor Perron, an earth scientist at MIT. The technique, he says, could provide a blueprint for developing methods of sustainably locking atmospheric carbon in tropical soils, helping fight climate change.

Indigenous people have altered the Amazon for thousands of years

The Western world has long viewed the Amazon as a vast wilderness that was relatively untouched before Europeans showed up. At the center of this argument is the idea that the Amazon’s soil, which is poor in nutrients like other tropical soils, precluded its inhabitants from developing agriculture at a scale required to support complex societies.

But a slew of archeological finds in recent decades — including the discovery of ancient urban centers in Amazonian areas of modern-day Bolivia — has revealed that people were actively shaping the Amazon for thousands of years before the arrival of Europeans (SN: 5/25/22).

Most scientists today agree that the presence of dark earth near archaeological sites means that long-ago Amazonians used this soil to grow crops. But while some archaeologists argue that people purposely made the soil, others contend that dark earth was laid down through geologic processes.

“When you plant where there is no eegepe, the soil is weak,” explained elder Kanu Kuikuro in one of the interviews. “That is why we throw the ash, manioc peelings and manioc pulp.”

The researchers collected soil samples from around Kuikuro villages and archaeological sites in Brazil’s Xingu River basin. The team found “striking similarities” between dark earth samples from ancient and modern sites, Perron says. Both were far less acidic than surrounding soils — probably thanks to the neutralizing effect of ash — and contained higher levels of plant-friendly nutrients. 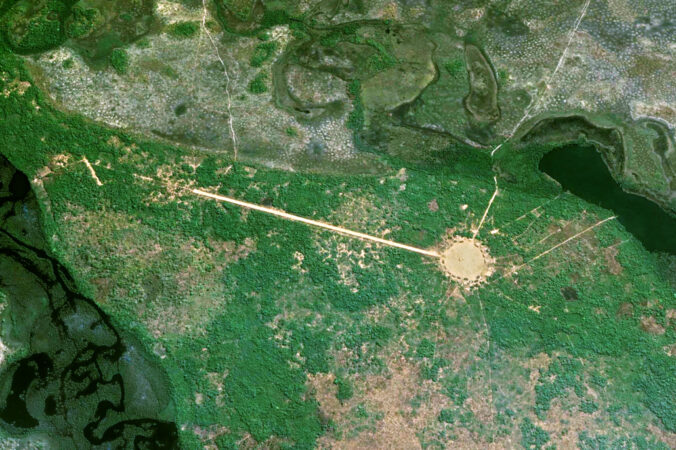 Soil that bears a striking resemblance to dark earth can be found in and around Kuikuro villages (one seen here from above) in southeastern Brazil. GOOGLE EARTH, MAP DATA: GOOGLE, MAXAR TECHNOLOGIES

Dark earth could store a lot of carbon in the Amazon

These analyses also revealed that dark earth holds twice the amount of carbon as surrounding soils on average. Infrared scans of the Xingu region suggest that the area is pockmarked with dark earth, and that as much as roughly 9 megatons of carbon — the annual carbon emissions of a small, industrialized country — may have gone unaccounted in the area, the researchers reported at the meeting.

This number, while preliminary, could inflate to roughly the annual carbon emissions of the United States when all dark earth across the Amazon is taken into consideration, Perron says.

Figuring out how much carbon is actually stored in the Amazon could help improve climate simulations. But the researchers’ estimates are a “huge extrapolation from a very small dataset,” Baker cautions — a sentiment echoed by Perron.

Pinning down the true value of carbon stored in the Amazon’s dark earth will require more data, says Antoinette WinklerPrins, a geographer at Johns Hopkins University who was not involved in the study. Still, the research has “profound implications of the past and future” of the Amazon, she says.

For one thing, the technique highlights how ancient people were able to thrive in the Amazon by developing sustainable farming that doubled as a carbon-sequestration technique. With more and more greenhouse gases entering the atmosphere, making dark earth — or something like it — could be a method of mitigating climate change while supporting agriculture in the tropics.

“People in the ancient past figured out a way to store lots of carbon for hundreds or even thousands of years,” Perron says. “Maybe we can learn something from that.”