Discourses on practices of grassroots democracy often focus on modes of popular participation centered on institutional avenues such as elections and local governance issues dealing with decentralization, devolution, and local autonomy (Mohanty 2007, 15–32). At the local level, consequent interests are on “restraining arbitrary and corrupt official behavior and enhancing the accountability of grassroots authorities” (Perry and Goldman 2007, 1).

In the political arena where countervailing forces operate, grassroots democracy is often related to social movements and peoples’ organizations intervening in the political process through advocacies and campaigns on regime and systems change and/or devising strategies and practices that engage with the state. For instance, farmers and rural poor in Northeast Thailand “assert their rights and demand state compensations” and engage in “direct actions towards the state (and) press their demands for corrective action” (Prasartset 2004, 140).

Even when a less state-dependent perspective is raised in terms of “participatory governance through the empowerment of communities and grassroots, the process is ultimately depicted in terms of achieving “an increased ability of the poor to effect or influence state policy” and bring about “institutional reforms” (Angeles 2004, 184). Among “civil society” groups advocating “social transformation” in the Philippines, Franco (2004, 100–1) points to “a still unrealized institutional setting where effective access to democratic governance is available to the entire citizenry . . . (and) . . . aiming to promote change by exercising citizenship power in state policy-making and implementation.”

Popular participation, moreover, has an economic character. Parameswaran (2008, 127), notes that participation can be strengthened by “(a) giving primacy to the primary sector and, fragmentation of ownership, and collectivization of operations; (b) relying on small-scale, but efficient industries, rather than on mega enterprises; ”making small not only beautiful but also powerful and thus (d) making local economies strong enough to withstand the onslaught of global economies.” This dimension of grassroots democracy where the state and state-related matters recede in importance and focus remains relatively unexplored and have not been given the proper attention they deserve.

This alternative framework looks at how the poor and their communities have (through the ages) been able to manage their own lives through mechanisms that lie outside the formal systems of governance and economics. This sector encompasses political, economic, social, and cultural aspects. The list of alternative practices could be enormous and include, among others, (1) age-old but tried and tested production and distribution systems, (2) local decision-making processes, (3) informal land market mechanisms, (4) local credit systems (not usury), (5) concepts of common and individual property rights, (6) notions of justice and entitlement, (7) non-formal and folk education, (8) indigenous health care systems, (9) local cultural norms and belief systems, (10) everyday forms of resistance, etc. In contemporary times, there are efforts by poor and marginalized peoples sidestepping and even violating established legal processes and institutions, e.g., unilaterally taking control of land and other resources to create self-sustaining and viable socio-political and economic communities.

The Program on Alternative Development of the University of the Philippines Center for Integrative and Development Studies (UP CIDS AltDev) recognizes the value of grassroots democracy as depicted in the alternative practices on the ground. For the past three years, UP CIDS AltDev has been researching case studies of practices in Southeast Asia and have documented and published around sixty of such cases.2)

More than simple documentation and publication, UP CIDS AltDev has brought practitioners together in three annual Southeast Asian regional conferences where experiences from the ground are shared, exchanges undertaken, challenges identified and lessons learned. The ultimate goal is to establish a new network based on regionalism and transnationalism from below that would challenge the dominant elite-centered and oligarchical-controlled regionalism as exemplified by the Association of Southeast Asian Nations (ASEAN).

The following three cases of alternative practices illustrate grassroots democracy at work in Thailand, Indonesia, and Timor Leste. They represent efforts by rural communities to practice grassroots democracy in all its dimensions and iterations while asserting their autonomy in building sustainable lives for the peoples.

Inequitable land distribution in Thailand has endured over the years because of the concentrated land management of the Thai state. In addition, capitalist development has commodified land to serve a market economy. The Thai state facilitated the private sector cultivation of cash crops such as oil palm on state-owned lands to respond to the global demand for industrial crops. In Surat Thani Province, Southern Thailand, landless and small-scale peasants have employed alternative economic, political, social, and cultural practices to counter state-centric land management. 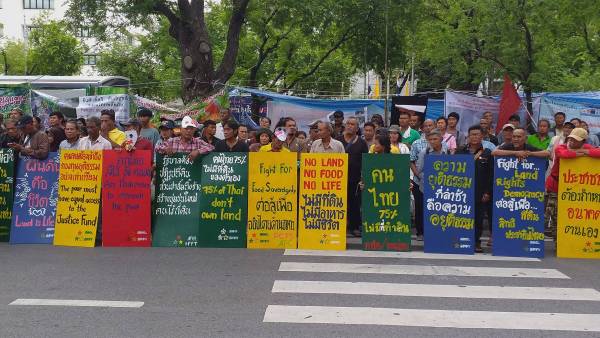 In 2003, Thai farmers discovered that around 11,200 hectares of land concessions for oil palm plantations had already expired. Established in 2008, the SPFT has led landless peasants and workers in Surat Thani province, southern Thailand, to unilaterally occupy portions of these lands, establish new community settlements, and to demand equitable land distribution. Their community members, however, have been subjected to intimidation, illegal detention, eviction, death threats, and killings believed to be perpetrated by a real estate mafia and agribusiness interests.

Despite these challenges, they continue to apply their idea of a community land title deed underpinned by the concept of community rights to land and natural resources management. Alternative practices of land management including diversified farming employed by SPFT community members call for participatory development and governance. In alliance with the People’s Movement for a Just Society (P-Move), the SPFT continues to struggle for land rights and advocate redistributing land equitably among landless peasants in Thailand.

In 2020, the COVID-19 pandemic tested SPFT’s self-reliance even as they were deprived of sufficient government relief measures and protective equipment due to the lack of household registration records. Their grassroots-level practices of alternative land management and sustainable food production consisting of collective farming of food crops, goat raising, dairy production, and establishing a rice bank enabled them to build a social safety net and remain food sufficient and resilient against the pandemic.

Officially established in 2000, the history of agrarian struggles by SPP actually goes back to the 1980s, when student movements in Garut, Indonesia were at the forefront of promoting the rights of the farmers on agrarian reform and environmental conservation. This eventually led to the formation of SPP, whose membership spread to Pangandaran, Tasikmalaya, and Ciamis in West Java (Pasundan is the historical name). The Union’s expansion enabled it to take on other issues, such as democratization and the promotion of people’s well-being in the community.

SPP’s vision is to “develop or build structures of economic social politics based on values and principles of humanity, infinity, and justice” (Kartini 2019). To attain this vision, SPP has adopted goals, strategies, and activities that promote grassroots democracy in the community and in the whole of society and, in particular, support the control and management by local communities over their common resources. 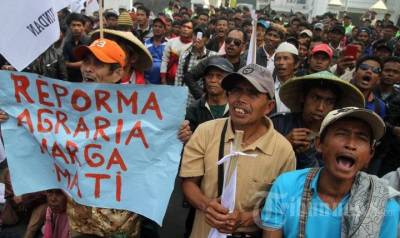 SPP staged land occupations and reclamation of publicly-owned rubber plantations in West Java and managed to undertake various economic and social projects including diversified farming, managing alternative schools (primary and secondary levels) that offer learning sessions on agriculture and on agrarian law, fair trade exchanges, a community-managed eco-tourism in Pasundan, as well as a local coffee shop in Jakarta that sources its coffee from its many coffee farming communities across the country.

During the COVID 19 pandemic, SPP co-organized the food solidarity movement called Gerakan Solidaritas Lumbung Agraria (Gesla) or Agrarian Food Barn Solidarity Movement. They distributed free food to members of fraternal organizations in Bandung and Jakarta and other parts of Indonesia. This is amplifying their local wisdom of cooperation based on the most common system called beras perelek, in which a farmer saves a cup of rice a week in a bamboo tube that is later collected by the community to help others or sell the accumulated rice savings to purchase communal facilities.

Under both Portuguese colonialism from the 16th century to November 1975 and Indonesian occupation from 1975 to 1999, the Timorese local communities were prevented from performing their own conservation management efforts and maintaining social cohesion. The Indonesian occupation not only depleted resources but also weakened traditional social structures that prioritize the communities’ capacity to manage and protect their land and natural resources. Bombings and forced resettlement also contributed to adverse environmental and social changes. 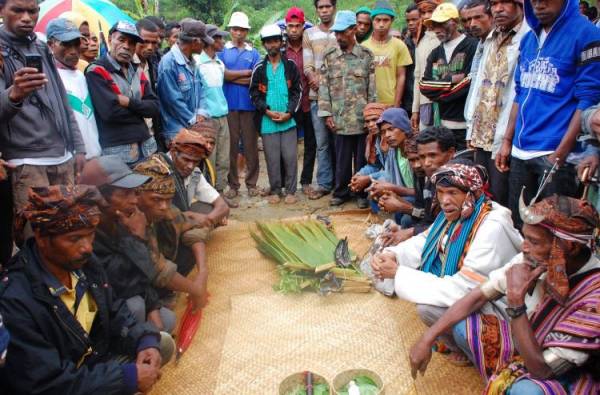 UNAER is an agricultural organization based in the Ermera municipality of Timor Leste. Founded in 2010, UNAER organizes farmers in the district for mobilizations and dialogues with government officials to defend their rights over the land as mixed-race (mestizo) families continue their claims over huge coffee farms in the area. They justify their unilateral land occupations due to the absence of a national agrarian reform policy and the fact that the occupied areas are part of their ancestral domain. The occupied lands were distributed among the community members.

In post-conflict Timor Leste, the customary practice known as the tara bandu, achieved strong resurgence for local decision making, collective action, enforcement system, and agrarian reform implementation. It was observed that community-based actions using the tara bandu were more effective in undertaking alternative development. The practice consists of organized rituals, building of altars, and the use of natural objects in implementing agroecology principles and enforcing local laws such as prohibition of harvesting of natural resources in protected areas. Ermera, the country’s largest area for coffee production, has become a model for tara bandu implementation at the district level.

The Thai, Indonesian and Timor Leste cases presented here are but a fraction of countless grassroots initiatives in Southeast Asia that demonstrate the capacities of empowered and organized communities to assert their rights to land, livelihood, and political decision-making that are exercised outside of the state framework. Utilizing principles of solidarity, sharing, cooperation, the commons, collectivity, and the judicious use of traditional customs, the communities are able to remain resilient even in pandemic times. Challenges from the state, rural elite, and corporate interests continually hound them but they have remained steadfast in their advocacies and campaigns.

1)
Excerpted with revisions from Tadem 2012.

2)
The cases are published in UP CIDS AltDev’s Monographs on Alternatives (https://cids.up.edu.ph/program-on-alternative-development/).