Disaffected with his way of life in the US and concerned about the multiple ecological crises bearing down on humankind, Joe Brewer set off on a journey to learn what he might be able to do. He had considerable background in the earth sciences, studied cognitive linguistics and philosophy, and had worked with the activist group, The Rules. But restoring an entire ecosystem would be a novel challenge.

In 2019, Brewer ended up in Barichara, Colombia, with his wife and infant daughter, where he soon found himself helping to catalyze a “living laboratory of regeneration” of a degraded landscape, an arid tropical forest, in the northern Andes.  Ninety percent of the forest in the region’s one million acres had been cut down, causing the once-fertile food forest to dry out and become a desert.

How does one begin to restore such a profoundly degraded landscape? 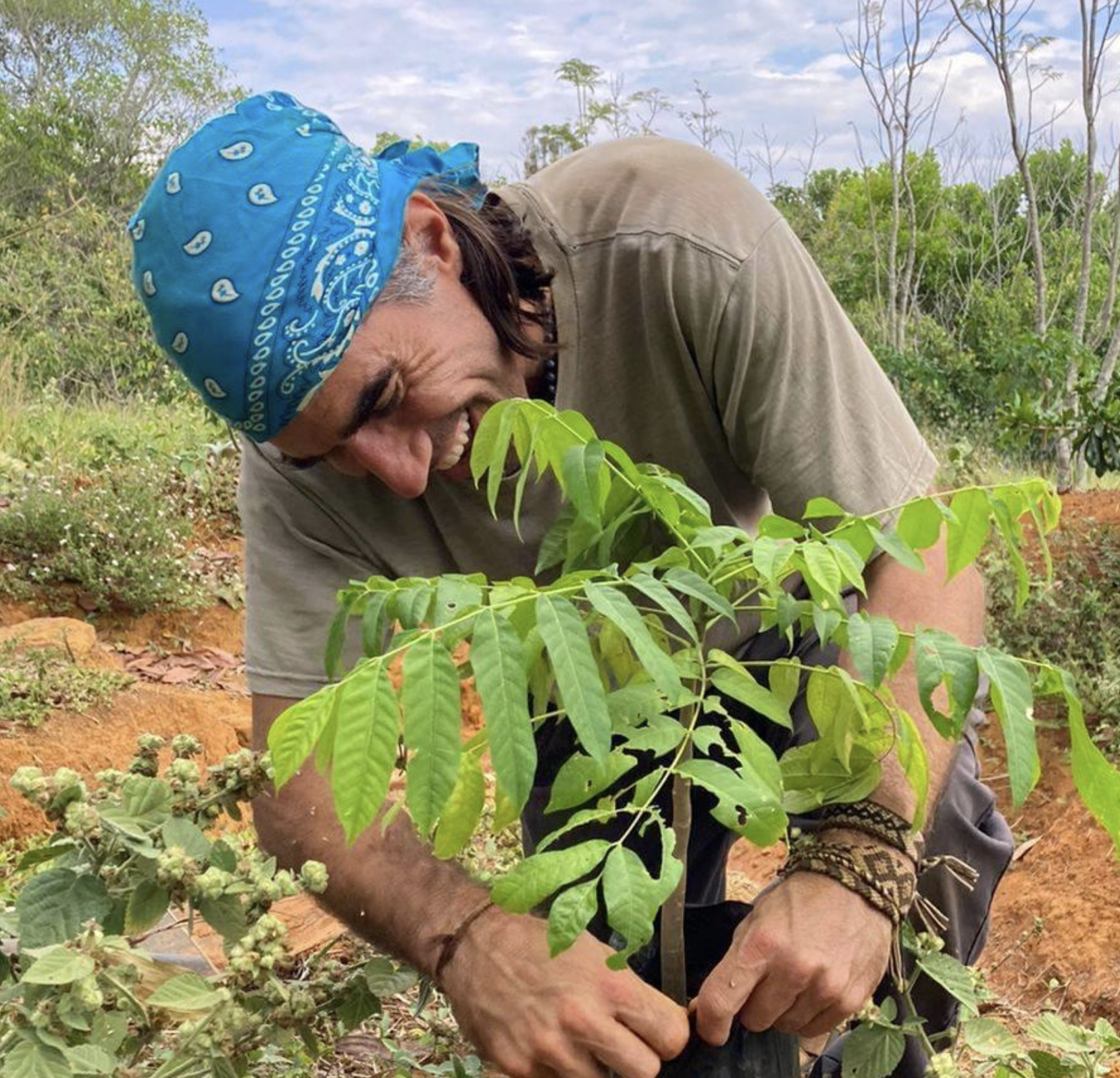 As a newcomer to the region, Brewer quickly realized that there were many great local projects underway, but their practitioners barely knew of each other’s existence. So he slowly waded in, forming relationships with farmers and eco-players, and bringing them into closer communication with each other. Brewer also relied on the principles of permaculture, closely observing the patterns and cycles of the ecosystem to try to identify what it needed to begin to flourish and sustain itself.

Fortunately, Brewer had learned a great deal about earth sciences through former affiliations with the International Centre for Earth Simulation, the Center for Complex Systems Research at the Uni­versity of Illinois, the ­Cultural Evolution Society, the Rockridge Institute, and the Evolution Institute.

But for Brewer, reclaiming the ecosystem was not some abstract exercise or supervisory challenge. It was personal and gritty. In April 2020, one month after the pandemic lockdowns in Colombia, Brewer would sneak out of his house to the edge of town, and start to dig “contour swales” in the side of the mountain. These are horizontal irrigation ditches perpendicular to the flow of water that help catch rain water and encourage it to sink into the soil.

“And so I began going out into the rain with a pickax,” said Brewer. “At night during the three months of the rainy season, I would take a flashlight and a pickax, and I would let the water be my guide and dig contour swales. The first project was one meter in length.” This beginning soon expanded into twenty different water retention systems across four hectares of land, which have completely transformed the evolution of the landscape.

Eventually Brewer used his social media presence to alert bioregional activists around the world to the project, and to raise money to help it expand. He used funding support from Patreon to support his family and his work. And to help seed worthy local projects, he founded Earth Regenerators, a project that is attempting to revive the town’s food forest and purchase and restore land critical to the region’s aquifers. He currently has 11,000 Twitter followers and 7,500 Facebook contacts.

In my latest episode of Frontiers of Commoning (Episode #33), I speak with Joe Brewer to learn more about his vision of bioregional restoration, the techniques and tactics he is using in Barichara, and his expanding ambitions to help bioregions internationally to organize their own similar efforts.

Through crowd-funding, $50,000 was raised – enough to buy some land. The remaining money, some 30 million Colombian pesos, were given to a group of fifteen strong local projects to decide how the money should be spent. Through the “prosocial” process developed by David Sloan Wilson, the group identified criteria and a collaborative decisionmaking framework for allocating the money for territorial-scale work.

Throughout, Brewer has been keenly aware of Colombians’ skepticism of outsiders. After all, Latin America has suffered from centuries of colonialism, genocide, and neoliberal extractivism. He realized that ecological restoration needs to be driven by local wisdom, participation, and creativity, not by “outside experts.” He is just one (important) catalyst among many players in a collaborative process of commoning.

This bioregional approach holds the most hope for developing credible pathways to planetary sustainability, Brewer argues. He rejects two approaches that are embraced by many in the capitalist West – one, that technology will save Earth and humankind, a fantasy that Brewer, citing billionaires like Elon Musk and Jeff Bezos, calls “the Sociopath’s Dream”; and two, the “business as usual” approach, including “green growth,” which fails to acknowledge that humankind is already overshooting the carrying capacity of the Earth.

Brewer instead puts forward a plan to create a planetary network of local living economies, organized as bioregions. This idea builds on the pioneering work of Dana Meadows and “The Limits to Growth” study published in the early 1980s. Brewer outlines his vision in The Design Pathway for Regenerating Earth, a short but powerful book synthesizes a vast scientific literature to warn of the colossal ecological dangers now facing humanity. The book also explains the many commons-based, prosocial practices and norms that can help us restore the Earth’s living systems.

Brewer has described himself as “a change strategist working on behalf of humanity” – a phrase that aptly describes his work. When I proposed to Brewer that his work “might be important to the future of civilization, if I can put it that bluntly,” he didn’t hesitate a moment:

“I would go beyond that and say, civilizations are a temporary experiment in human organization in the last 1% of human history, the previous 99% being hunter-gatherer societies.”

My conversation with Joe is worth a listen!  Inspiring and deeply informative.  More here.