Ukraine – known as the “breadbasket of the world” – is home to large and small farms that, before the war, were able to coexist side by side for many years. Large farm enterprises specialise in monocrop export-oriented agriculture (predominantly grain and oilseeds) and contribute to a half of the gross domestic agricultural product. The other half is produced by smallholder farms, represented by semi-subsistent rural households and more commercially oriented family farms that produce staple food for the domestic market.

Such bimodal agrarian structure could be an example of a successful “coexistence scenario”, advocated by the World Bank and neoliberal economists, if not for a few “buts”. Large-scale agriculture is dominated by vertically and horizontally integrated groups of affiliated agroenterprises – the so-called agroholdings – that monopolized the entire agricultural value chain, receive the bulk of the state subsidies, and are often involved in land grabbing. Agribusiness lobby for policies that benefit large corporations, and the Soviet belief that “big is beautiful” had been shared by politicians, business and society. In such conditions, smallholders were left to survive, not to prosper.

Things started to change after the Euromaidan revolution in 2014, the consequent confrontation with Russia, the annexation of Crimea, and the war in Donbas. In my previous research, I observed how the redefinition of national identity and the rise of pro-European patriotism have changed the ways people talk about farming. If earlier small farms were perceived as backward and inefficient, after the Euromaidan, more and more people began to see personal farming as a sustainable alternative to large-scale industrial agriculture, which could feed Ukraine (and Europe) with ecological and healthy food. However, smallholders remain largely divided, unable to join forces to protect their interests (you can read a short summary of this research on ACR2020).

Russia’s invasion of Ukraine on February 24, 2022 has brought pain, death and suffering to the Ukrainian people. Yet, it sparked something, which was not there before – a massive wave of solidarity and collective action in rural areas. In my new article “Food sovereignty and solidarity initiatives in rural Ukraine during the war” I analyse how different food producers deal with the hazards of the war and what role solidarity and collective action play in their survival.

Given the key role of agriculture in Ukraine’s economy and exports, it is not surprising that the Russian army target agricultural facilities and infrastructure. Big business bears the greatest losses. There are many documented cases of Russian missiles being directed at large agricultural objects, such as grain elevators and big farms (see satellite images of farm destructions), and the Russian army seizing Ukrainian grain from the temporarily occupied territories. Ukrainian transport and energy infrastructure is severely destroyed, fuel and farm inputs are scarce, large agricultural fields are littered with bomb craters or riddled with mines, and many farm workers were either called to the front or took refuge in other countries. But above all, Russia’s blockade of the Black Sea ports, through which 90% of the export of Ukrainian grain and oilseeds was carried out, called into question the survival of the entire export-oriented agriculture in Ukraine (more on the impact of the war on Ukrainian agriculture is here).

Faced with these challenges, large agricultural enterprises were unable to quickly adjust their production methods or reorient towards the domestic market. Even those agroholdings, with lands are located outside of active hostilities, had difficulty organizing sowing and harvesting campaigns because the agricultural value chain was disrupted, leading to serious logistical problems. Agroholdings previously experienced financial difficulties but remained viable due to their access to external financing and support from their parent (often transnational) corporations. While creditors and sponsors would not withdraw their financial support from agroholdings right now, they may reconsider their investment objectives in the longer term. Moreover, after the war, agroholdings will not be able to participate in the reconstruction programs, and Ukraine’s candidacy for EU membership has cemented the farmer-centric model. Without financial support, the already weakening agroholdings might steadily disappear. 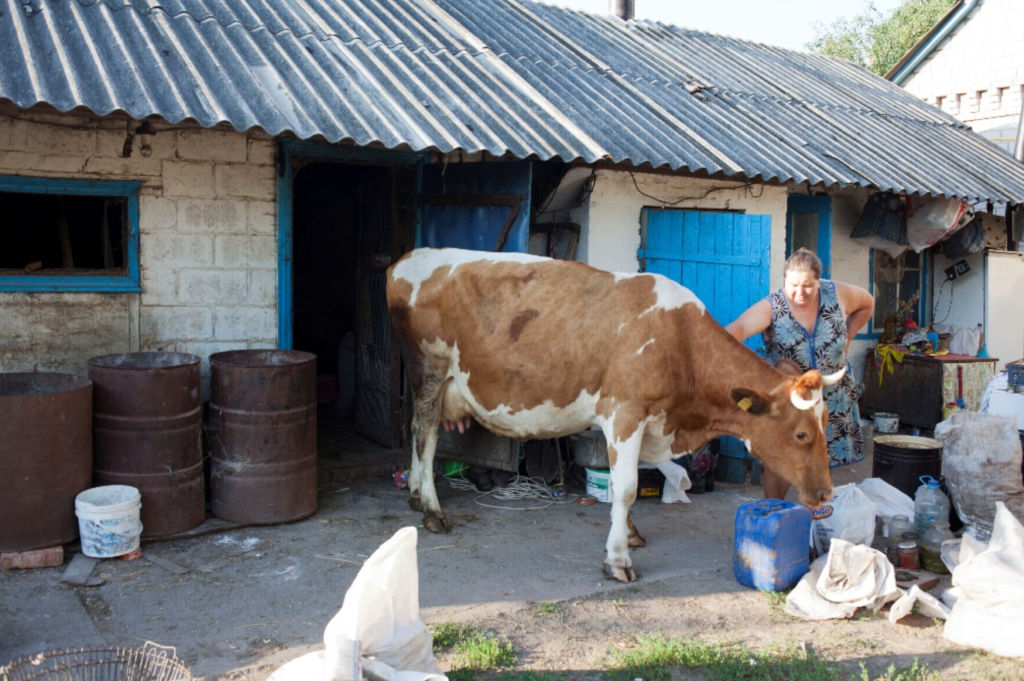 Lyudmila with one of her 6 cows. She runs her household together with her husband, youngest son and daughter-in-law. She travels to Kiev once a week to sell their milk products at a farmers’ market (Hreblya village, Kyiv region, Ukraine. Photos by S. Donati).

Smallholder farms, in turn, have proven to be more resilient and persistent in the face of war. Localised food systems are generally more resilient to global shocks and disturbances, as they do not depend on external resources and international trade (studies on the impact of Covid-19 have confirmed this). And, indeed, despite enormous hardships and life-threatening conditions, Ukrainian smallholders managed to cultivate their lands and then harvest. How did they do this? Most of them did not have fuel (smallholders had no license to store fuel in reserve, and, what they had, they donated to the needs of the Ukrainian army), so they used horse-drawn transport and manual labour. They shared seeds and machinery, replaced chemical fertilizers with organic ones, and, in the case of export-oriented farms, were able to quickly reorient to the domestic market, producing, for example, buckwheat instead of corn.

Like mushrooms after a rain, various initiatives have emerged that encourage and facilitate food self-provisioning of Ukrainians during the war. Among them are the Green Road initiative of eco-villages that receives many internally displaced people in rural homes, and Victory Gardens (Sady Peremohy) that provides seeds, fertilisers, small equipment and knowledge to everyone who wishes to set a garden on a household plot, a balcony, or a dacha yard. The war provoked a huge outpouring of solidarity in rural communities: people were able to overcome divisions and combine their efforts to grow, prepare and distribute their food. Fresh and homemade food is consumed within communities, shared with internally displaced persons, and sent to Ukrainian soldiers fighting on the front lines. Small farms have once again proved their ability to feed the country.

It is too early to say what will happen to the Ukrainian bimodal agrarian structure in the future. The war demonstrated that smallholders can better adapt and survive in extreme conditions by relying on short food chains, alternative farm inputs, mutual help and reciprocity. Yet, agroholdings have their advantages due to their gigantic size, scale of influence, and close ties to the Ukrainian authorities, which could help them regain their dominant positions. However, the war-born networks of solidarity should help smallholders protect their interests and secure their role in rebuilding better, just and more prosperous Ukraine after the war.