Two tumultuous decades have passed since the publication of Great Transition: The Promise and Lure of the Times Ahead, the essay that prompted the formation of the Great Transition Initiative (GTI). Although the ambient pessimism of 2022 darkens the twentieth anniversary of a treatise that harbored hope for the future, it is also good reason to reflect on the durability of its message.

From the vantage point of 2002, GT envisioned contrasting scenarios for the twenty-first century. Now, standing partway into that unknown future, we are witnesses to how lived history collapsed all the possibilities into a single path—so far. The moment is propitious for locating where we are and where we are headed—and for recalibrating our conceptual framework and action agenda.

To some extent, GT shows its age: the expiration date has passed on certain details, and some formulations are a bit long in the tooth. Still, time’s passing has only bolstered the essay’s core premise. A world-historic shift is underway from the Modern Era to, in GT’s coinage, the Planetary Phase of Civilization. From modernity’s centuries of transformation and expansion emerged something new under the sun: a global social-ecological system.

As a corollary, this perspective of an epochal shift in progress sees the polycrisis proliferating and intensifying around us—climate change, biological extinction, economic instability and inequality, geo-conflict, pandemic, and so on—as the death throes of the fading era. Further, the contradiction at the heart of the contemporary predicament—the Modern Era, compelled to beget the Planetary Phase, cannot govern it—is exposed. A political economy rooted in globalized capitalism and a state-centric order is ill-adapted for managing the interdependencies and instabilities it generates, as illustrated by feeble official responses to mounting perils.

With outdated institutions out of sync with novel challenges, history muddles toward dangerous thresholds of discontinuity. In this time of uncertainty and apprehension, public confidence in conventional authority erodes. The loosening grip of prevailing norms gives way to contrasting oppositional cultures. The noxious eruption of chauvinism and demagoguery underscores the real danger (though not certainty) of a barbarized future.

At the same time, the twenty-first-century condition nurtures an ethic of cooperation and solidarity that can facilitate a transition to a just and ecologically sound future. All denizens of Earth have become a single community of fate with shared risks and opportunities. This objective circumstance urges forms of organization and consciousness resonant with the emerging imperatives of one world yet does not guarantee that they will prevail.

We are on a perilous journey from a moribund past to…where? Although we cannot predict the itinerary or destination, we can imagine different directions. GT organized the possibilities into three kinds of scenarios: structural continuity (Conventional Worlds), regressive devolution (Barbarization), and progressive transformation (Great Transitions). Then, variations were introduced within each of these archetypes to highlight key distinctions. Each envisions a unique form of civilization that might take shape deeper into the twenty-first century. Of course, endless variations on variations can be spun, but GT settled on a manageable set of six shown in Figure 1.1 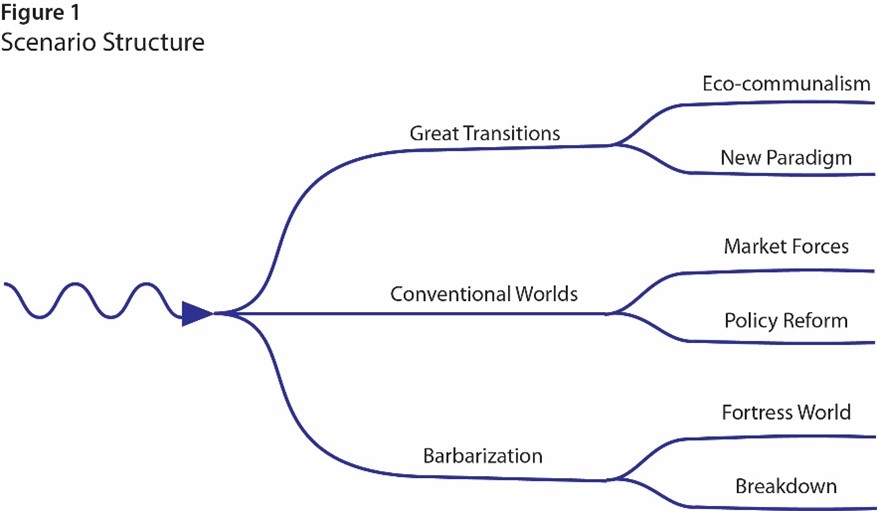 We peer into these futures, not to predict the unpredictable, but as prostheses for the visionary imagination and guides for near-term action. What critical uncertainties lie ahead? What long-range visions are plausible? How must we act to impede undesirable trajectories? What social actors might emerge to augment desirable trajectories?

In pondering these questions, GT concluded that all variations of Conventional Worlds were highly problematic. The Market Forces faith in the adequacy of self-correcting markets and human ingenuity for navigating the planetary hazards we face is a neoliberal fantasy for true believers and beneficiaries. Reality will gradually falsify the myth and strengthen the hand of centrist advocates for government-driven reform policies. But will their good intentions and ambitious rhetoric be enough? In a Policy Reform context, with capitalism, consumerism, and the state-based order sacrosanct, where would the political will come from to spur the vast coordinated action needed?

As Conventional Worlds falter, political and cultural space opens for precursors to Barbarization and Great Transitions. Much depends on the types of collective human agency that emerge. The sociological seeds of Barbarization have dismal antecedents in a long history of tyranny, tribalism, and jingoism. By contrast, the key social actor for a Great Transition—a unified movement for a just, democratic, and ecological world—would be unprecedented, a unique creature of the Planetary Phase. If this movement for a civilized future fails to consolidate at pace and scale, the forces of reaction could prevail, bringing an authoritarian Fortress World, or failing that, crash the whole edifice of modernity in a spasm of Breakdown.

In 2002, the passage from Modernity to the Planetary Phase was well underway. Twentieth-century transnational precursors—world wars, global depression, United Nations, Cold War, nuclear threat—heralded the macro-shift, which took off in earnest after 1980. Strands of global connectivity—economic globalization, digital technology, ecological destabilization, far-flung cultural influence—multiplied, stretched, and strengthened. The shift unsettled psyches and incubated a dizzying array of worldviews and ideologies.

In short, the world of 2002 was a complex, dynamic, and unstable hive of competing tendencies. GT described it as in a mixed state comprising all six scenarios.2 With neoliberal turbo-capitalism still at its zenith, Market Forces dominated almost everywhere, while in the background, the hum of Policy Reform could be detected in UN initiatives and civil society activism. Portents of Fortress World were palpable in resurgent tribalism and authoritarianism, while harbingers of Breakdown could be found in failed states, anarchic geopolitics, and runaway climate change. Nascent antecedents of a Great Transition stirred in new social movements and a rising consciousness reflecting both the cosmopolitan ethos of a New Paradigm and the localist emphasis of Eco-communalism.

With a crude view of the whole, the world appeared as a mosaic patchwork of all the scenarios. The conventional development paradigm was dominant almost everywhere, if not hegemonic, with the composition of tendencies varying across places. The mottled state of the world in 2002 is represented impressionistically in Figure 2. 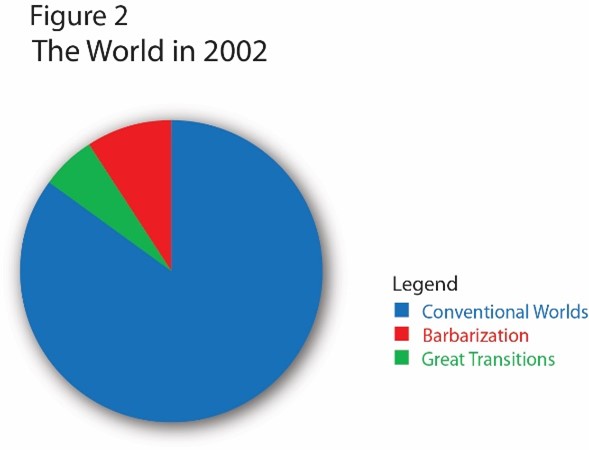 It is certainly not the best of times; in many ways, it is the worst of times. Surely, the dismal developments of the recent past have extinguished any remaining optimistic twinkles in the eyes of those paying attention. Still, near-term descent does not negate the long-term possibility (not probability!) of a better world fashioned through visionary struggle. That kind of action, based on militant hope, is the better friend of change than passive optimism.

In fact, all the scenarios depicted in GT—the good, the bad, and the ugly—begin with a downward historical spiral rife with conflict and disruption. Indeed, the narratives envisioned a convulsive “systemic crisis” for this period even direr than what has actually transpired to this point. The Great Unravelling that is the sine qua non for a Great Transition still gathers. Our long-term global prospects are not diminished by what has happened. The grave concern is what has not happened, as I explain below.

The story of the past twenty years, told with an upbeat bias, would foreground advances in digital and medical technology, expansion of rights to excluded communities, surging renewable energy, and poverty reduction in China and other growing economies. But a balanced account would spotlight, as well, the brutal wars, financial meltdown, massive displacement, runaway ecocide, climate crisis, soaring inequality, revived nuclear threats, devastating pandemic, demagogic politics, reactionary movements, and the list goes on.

The comforting notion of “business-as-usual,” always an illusion, seems a quaint relic from a naïve past. The force fields of historical change that were at play in the complex world of 2002 have evolved and the social-ecological dynamics driving change have clarified. While today’s world remains a complex mélange of competing forces, their composition has shifted. Figure 3 suggests which scenarios have waxed and which have wanted. 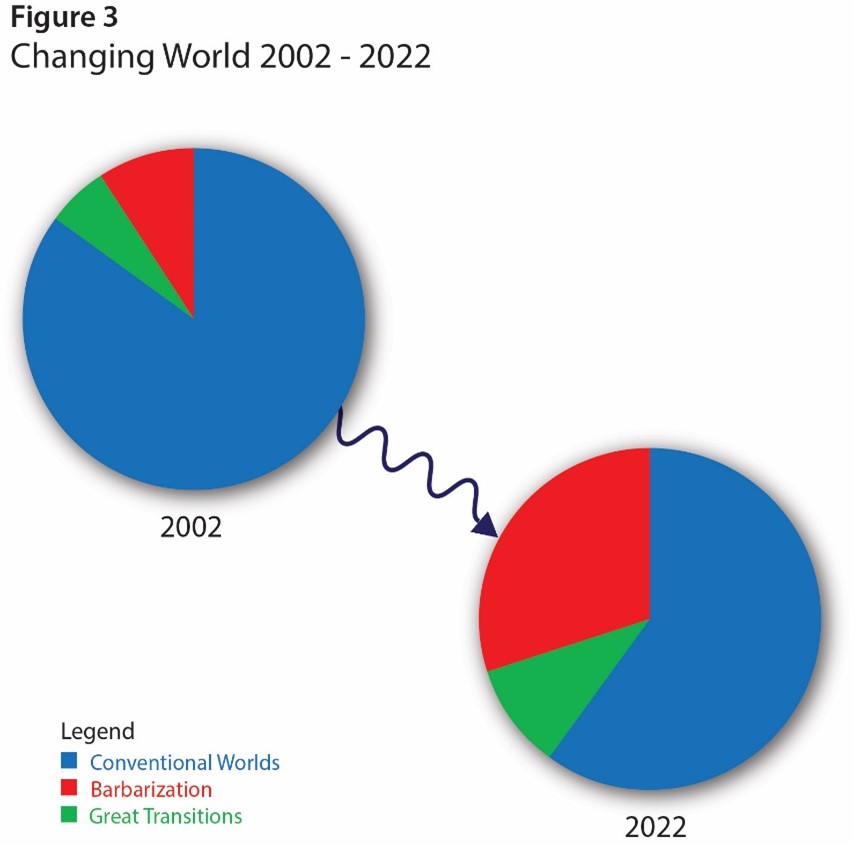 Market Forces limps on as the dominant mode of development, even as cacophonous wake-up calls—resurgent nationalism, political-economic instability, the specter of ecocide—have interrupted the pipedream of frictionless transnational markets. But the swirling chaos vitiates faith in unfettered capitalism and neoliberal nostrums. On cue, corporate globalists and political centrists, concerned about the survival of the system, have embraced a reform agenda. This Davos crowd of technocrats and latter-day social democrats, together with burgeoning civil society activists, have strengthened Policy Reform. Localities have been primary arenas for corrective action, and international negotiations have yielded significant, albeit largely rhetorical, successes, such as the UN sustainable development goals and climate agreements. Although such incremental reforms demand our support as an ethical and strategic imperative, they will remain an anodyne prescription for systemic disease so long as entrenched interests and behaviors quench real progress.

In the wake of fading Market Forces delusions and floundering Policy Reform corrections, a zeitgeist of fear and anger has churned. The alienated and disoriented become vulnerable to the cynical manipulations and false answers of demagogues, fascists, and political cultists as Conventional Worlds cedes space to its evil cousin Barbarization. Fortress World despots, charlatans, and authoritarians feed off the chaos. They may prevail and, unless they are able to fashion a coordinated global police state, make Breakdown ultimately an ever more plausible scenario.

What of Great Transition? The great uncertainty of 2002 was whether a progressive force would consolidate to supersede reform and neutralize barbarization. The planetary predicament could be expected to spur a unified movement, but the fragmented oppositional landscape and legacy of mistrust had to be overcome. What landscape do we stand in today?

Over the decades, the preconditions for a systemic movement have evolved. We see it in the uptick of civil society campaigns across the spectrum of justice, peace, labor, and environmental issues. We see the millions in the streets under the banner “system change not climate change.” We see it in youth culture growing attuned to the need for a progressive political shift. We see it in expanding scientific knowledge on the fragile biosphere in what has come to be called “the Anthroposphere.” We see it when engaged academics and social visionaries critique the reigning system and posit alternatives. We see it in the turn toward post-consumerist lifestyles, cooperative economies, and indigenous ways and worldviews. We see it in the visionary search in the Global South for a better model of civilization.

We see all this, but not yet the critical global movement we need. Because this has not happened, the years have not been kind to a Great Transition, as suggested in Figure 2. The critical actor missing from the 2002 stage—a genuine global movement for system transformation—has yet to make its appearance. That movement “would be systemic, connecting across issues, themes and regions; it would promote a positive vision of global development; and it would build an organizational framework for common action, not only as protest but also as affirmation of the alternative vision.”3

Twenty years on, the uncertainties of 2002 remain. How do we foster a politics of trust that bridges divisive polarities: unity-pluralism, identity-solidarity, global-local, top-down-bottom-up? What structures of collective coordination can catalyze a diverse yet unified movement? Who will change the world? Does a Great Transition movement stir in the wings?

Those of us committed to the fight for a civilized future have done much to kindle hope. But as time grows short, we urgently need answers to these vexing questions. Hanging in the balance: the future humanity will be living in twenty years from now (Figure 4). 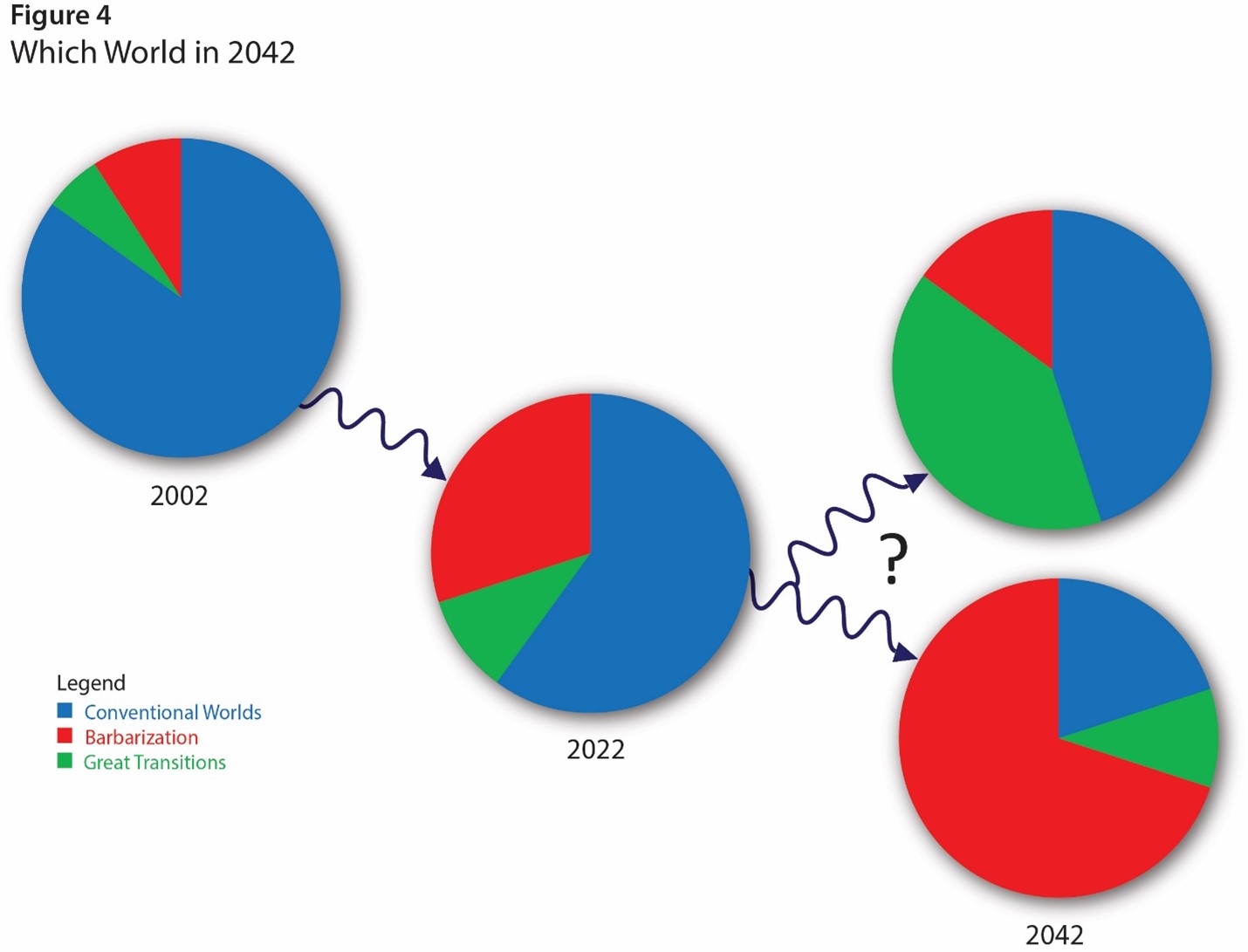