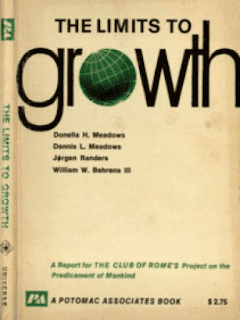 Recalling its origins is worthwhile, because it allows us to identify unusual phenomena. The research was requested by the Club of Rome from the Massachusetts Institute of Technology (MIT). The Club of Rome is a consortium of European scientists, businessmen, politicians and thinkers founded by Aurelio Peccei, Italian industrialist, and Alexander King, director of science in the European Community. The Club of Rome remains extant and has published 45 reports on the world situation. Headquartered in Switzerland, the consortium today has about 100 members with a presence in 30 countries.

Published in 1972, the study by the MIT Sloan System Dynamics Group is based on a global model that incorporated five critical variables or factors:

This model attempted to reveal trends for the next 100 years. The research arrived at three main conclusions:

a) If the current trends of the named factors continue unchanged, the planet would reach the limits to growth in the next 100 years. The most likely result:

a sudden and uncontrollable decline in both population and industrial capacity;

b) These trends must be modified in order to achieve an ecological and economic balance;

c) The sooner work is started on option b, the greater the chances of success. The global model they created managed to analyze all five factors in ensemble, that is, in terms of interlocking feedback loops. Fifty years later, there is now no doubt that humanity’s annual ecological footprint substantially exceeds its natural limits.

The impact of this book has been amplified many times because it came not from dissident or alternative intellectuals, but from the very bowels of the standard or dominant scientific system. Its greatest contribution is that it showed for the first time the consequences of uncontrolled growth on a planet of finite resources. The principal author of the report, in which 17 professionals collaborated, was Donella Meadows, a biophysicist and environmental scientist specializing in system dynamics. The Club of Rome has published three updated versions of the original report (1992, 2004, 2012).

We can distinguish several events around this report. First, the events that accompanied its publication in the 1970s. Around the same time, another key work appeared that called into question the foundations of economic theory:

N. Georgescu-Roegen’s (1971) book The Entropy Law and the Economic Process, which was the forerunner of ecological economics and thermoeconomics.

Then in 1972, the United Nations Conference on the Human Environment, held in Stockholm, Sweden, was the first world conference to make the environment a major issue.

The book´s enormous disruptive effect had to be confronted, then neutralized by defenders of the establishment. This defense was achieved by introducing a concept intended to obscure its approval of continued growth:

This concept was introduced by the Brundtland Report (1987), reconciling environmentalism and development, and which was imposed to support the idolatry of growth and/or economic development. Its spectacular launch occurred at the Rio de Janeiro Summit in 1992. Almost without exception, those of us who have been permanently concerned about the future of humanity and the planet uncritically accept and adopt the concept of sustainable development and its ingenuous triad (environmentally correct, socially fair and economically viable). The concept remains in force, marking international policies with the so-called Sustainable Development Goals [SDGs] as the targets set for 2030.

Against the above, an entire avalanche of books, reports, positions and statements has emerged that makes increasingly clear that we are facing a crisis of civilization, where corporate capital is really the main cause of the ecological and social crisis in the world today. The texts and the social movement on degrowth, the capitalocene theory, the positions of unions of scientists and, of course, the political ecology movements that exist today throughout the world have contributed to this questioning of the worldview of modernity and its main battering ram:

the economic system and its unstoppable obsession with growth.