As September met October this year, the “Nos Campagnes en Résilience” project hosted a rural resilience gathering in the west of France, in partnership with Forum Synergies, the Cooks Alliance, Ferme des 7 Chemins, the Municipality of de Plessé, PEP 44 et 49 and the Porticus foundation.

With participants from 12 European countries, the weekend created space for farmers, rural actors, regional and European organisations and policymakers to share, reflect and prepare action for the future of our countryside.

The objectives of the weekend? Honor and support on-the-ground actors engaged in the transition, by facilitating exchanges with others who are doing this work in their own territories. Facilitate exchanges between on-the-ground actors and persons from EU institutions and organisms. Draw conclusions for better policies and prepare the next step of the project on a European level for the coming two years. Among the hot-button issues discussed were access to land, quality of life, and the contradictions of our food systems. 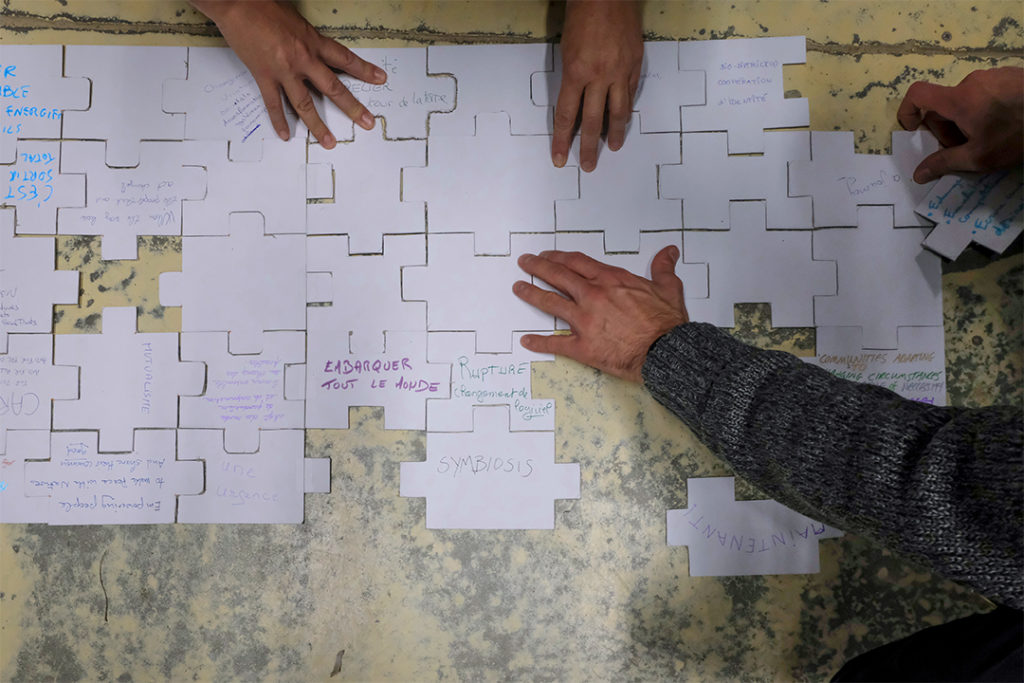 Thursday night, to kick off the weekend, participants began with a collective puzzle: What does socio-ecological transition mean for you? For all of us? © Hannes Lorenzen

What does socio-ecological transition mean for you? For all of us? Answers were varied but often brought up similar themes that we’d see manifested before our eyes throughout the weekend: 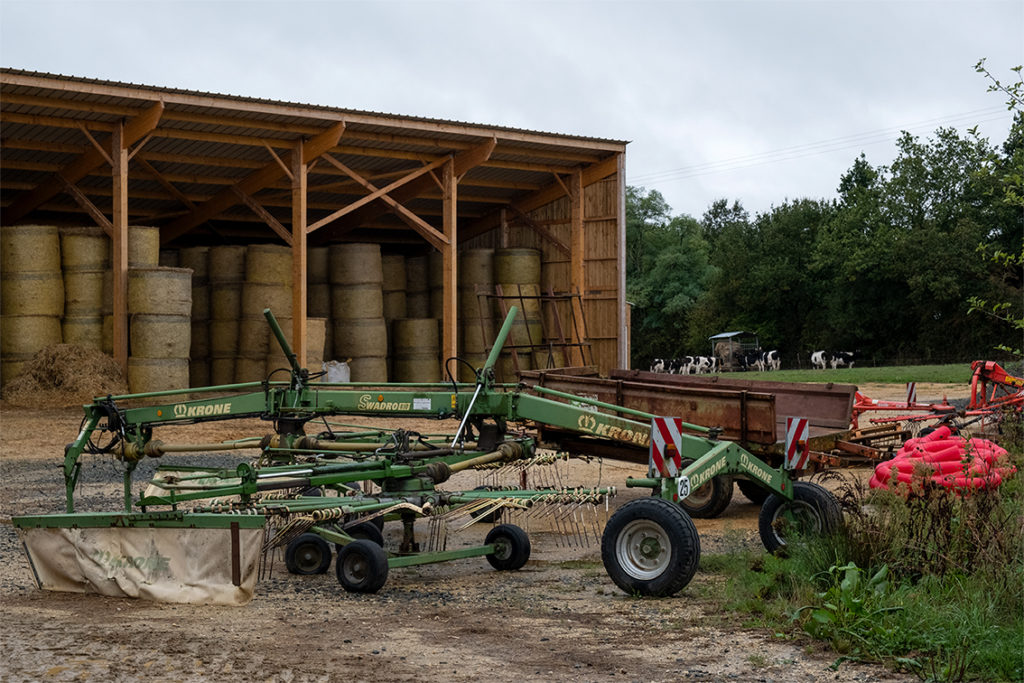 Immersion in the terrain began on Friday morning, with visits to different local institutions in Plessé and Redon. Here, a visit to a local branch of the CUMA, the machinery cooperative which allows sharing of equipment between farmers. © Adèle Violette

On Friday morning, participants were split into three groups to visit three local institutions in Plessé and Redon. A group of participants visited the CUMA Machinery co-op, which pools skills and equipment. We’ve reported on the learnings here. Farmers can reserve equipment owned by the co-op; this keeps them from having to purchase and maintain expensive, specialised equipment on their own. In a region where already an impressive 20% of farms are organic, 70% of the CUMA’s members are organic. The co-op is member governed; one member = one vote, whatever the volume. 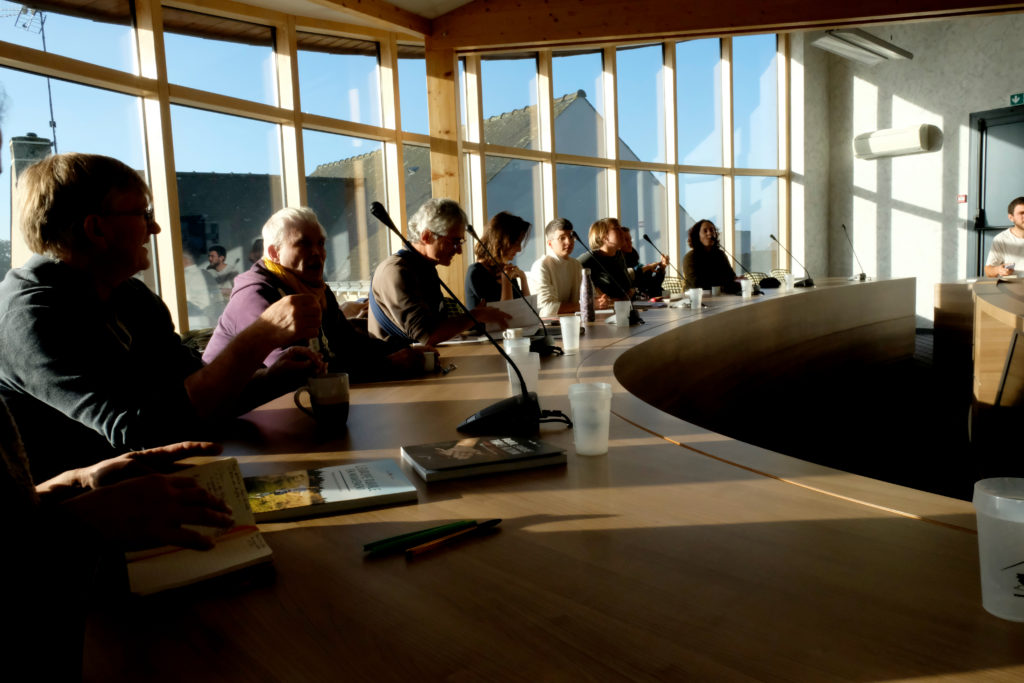 A region that runs off participative democracy: a visit to the Plessé town hall to learn about the municipality’s local agricultural and food policy stimulated discussion around realising a democratic transition. © Hannes Lorenzen

The municipality of Plessé created its own system of building a just transition through its own local agricultural and food policy, the PAAC (politique agricole et alimentaire communale). Outcomes of this PAAC include actions that foster short supply chains, like a new farmers’ shop and school canteens favoring organic local food, or the creation of a community land reserve. Another group of participants visited the town hall, and exchanged with leaders. Reaching a real participatory democracy was the objective on the mind of many. 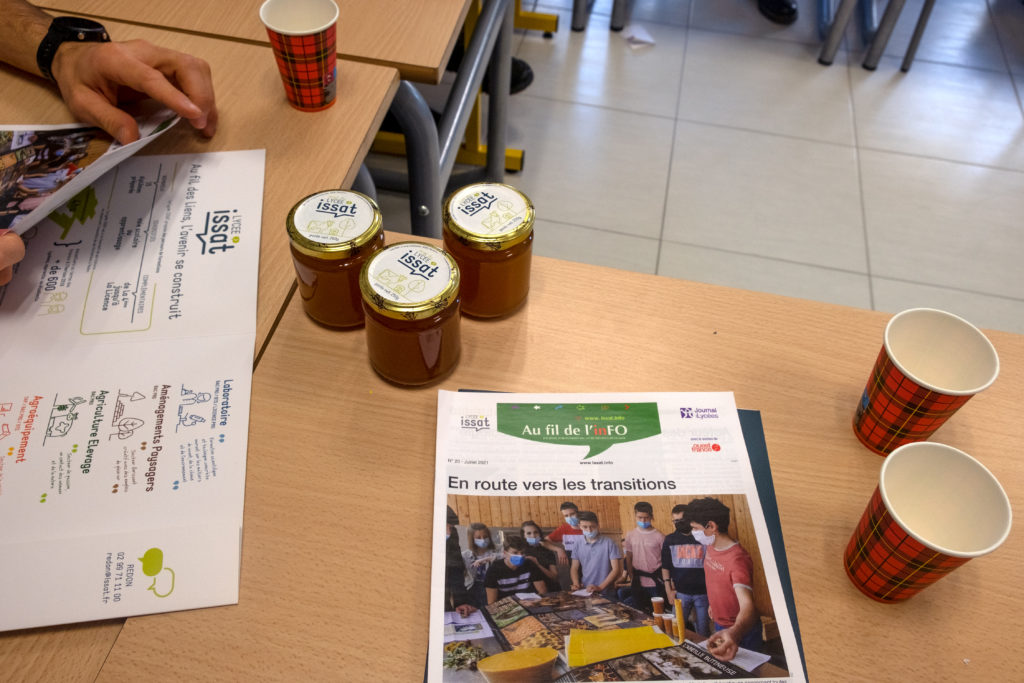 The next generation: a third workshop was held in the Issat agricultural college in Redon, connecting with students and staff who are working to build the future via their “local plan to teach to produce differently” (PLEPA 2021-2024). Pictured: the lycée gifted ARC2020 honey from their own bee hives. © Adèle Violette

And a final set of participants visited the Issat agriculture college (lycée agricole) that “teaches how to produce differently, for transitions and agroecology”. Since 2020 the agricultural college has begun a program that addresses the climate crisis. Revelations from this visit included witnessing how, “students are going deeper into topics.” The school acts to create places for experimentation, and facilitates students who are prepared to confront the current situation. Some challenges remain though; for a college like this to work, the implication of good teachers is essential. 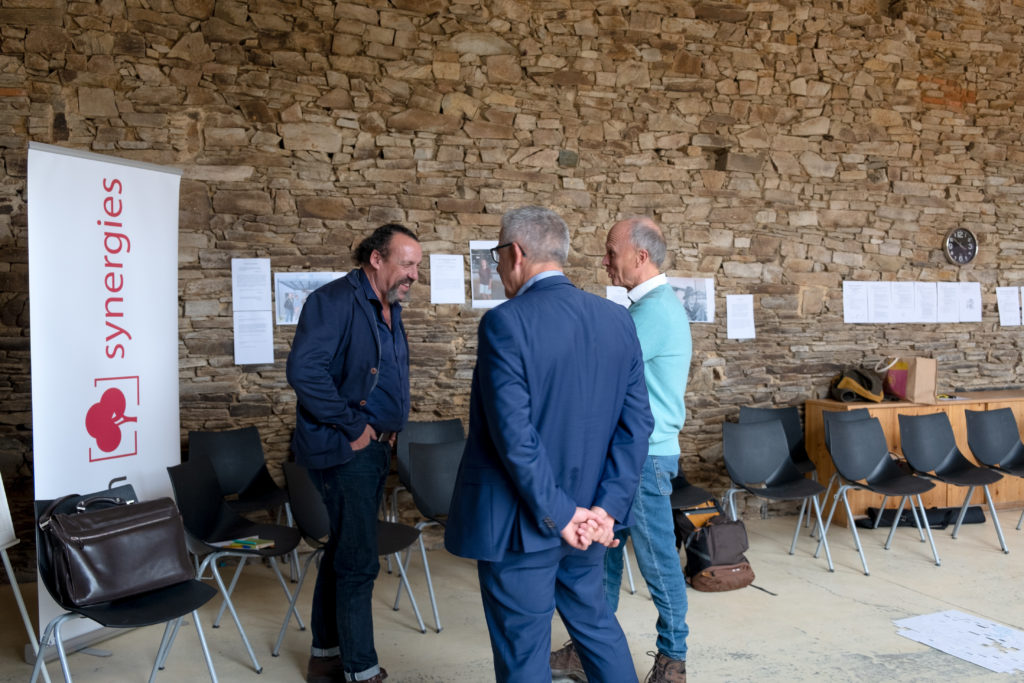 “We can’t keep acting as if land was an infinite resource”: MEP Benoît Biteau, Jean-François Mary, president of Redon conurbation, and Hannes Lorenzen, president of ARC2020, weave connections between local and European as they take in an exhibition of participants in the “Nos Campagnes en Résilience” project, following a round table on access to land that produced this strong message from Leïla Thominiaux (not pictured). © Adèle Violette

On Friday afternoon all participants found each other together again for a panel on access to land. On the panel was Benoît Biteau (MEP for Greens/EFA), French senator Ronan Dantec, Leïla Thominiaux, the 2nd vice-president of the regional land agency EPF (Etablissement public Foncier), Liliane Piot, the co-president of Terre de Liens, Mathieu Willard, a CAP policy analyst from ARC2020, and Jean-Pierre Hamon of the SAFER regional development agency (Société d’aménagement foncier et d’établissement rural).

Senator Ronan Dantec evoqued that the state is conscious of the problem of access to land for peasant farmers, and that it should be using all the tools within its legal disposition to help peasant farmers. Leïla Thominiaux reminded the audience that it is now impossible to behave like land is an infinite resource, and called for protection and valorisation of farmland – pastures, buildings and resources. 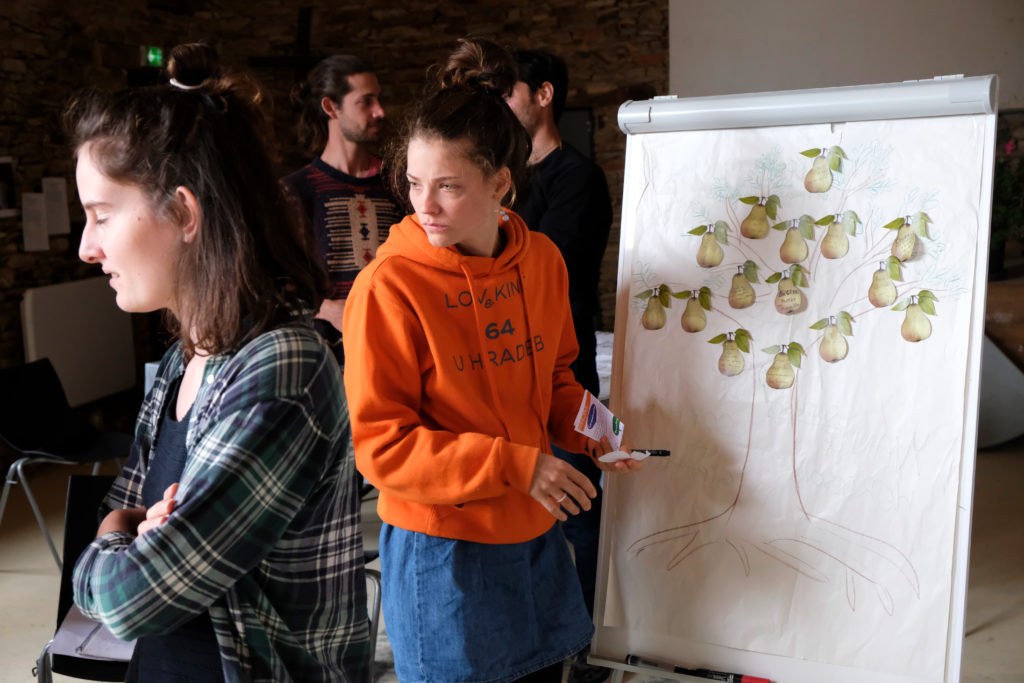 After our immersion in the terrain, group work and reflections later that evening. © Hannes Lorenzen

Next, a group work session to exchange learnings from the morning. Organisations like the SAFER, according to Jean-Pierre Hamon are like the protectors of the land – the technical committee of each SAFER chapter helps match the sale of lands to the farmers that need it most. Does it go a step further than the PAC? Mathieu Willard encouraged the audience to reflect on how the PAC shows to what point land is seen as a commodity, across Europe. But where is its social and cultural role? 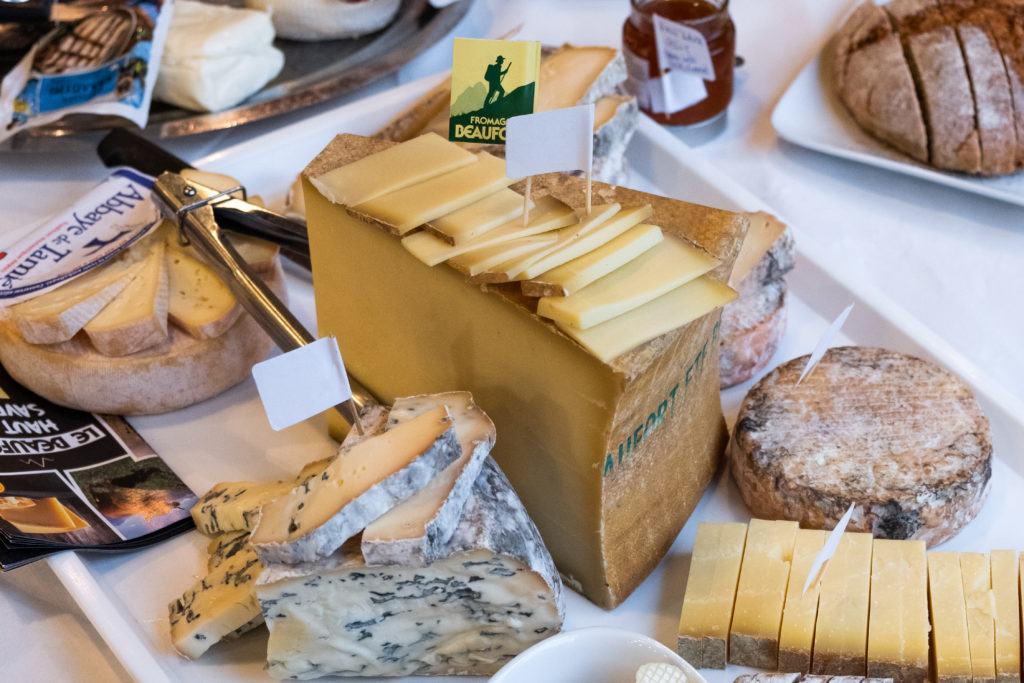 The European buffet: on Friday evening, we savoured regional specialities brought by participants in the event who had travelled from all over Europe. © Adèle Violette

On the Friday evening we took a culinary tour of Europe with a European buffet, which was a chance to sample regional specialities brought by participants in the event who had travelled from all over Europe. 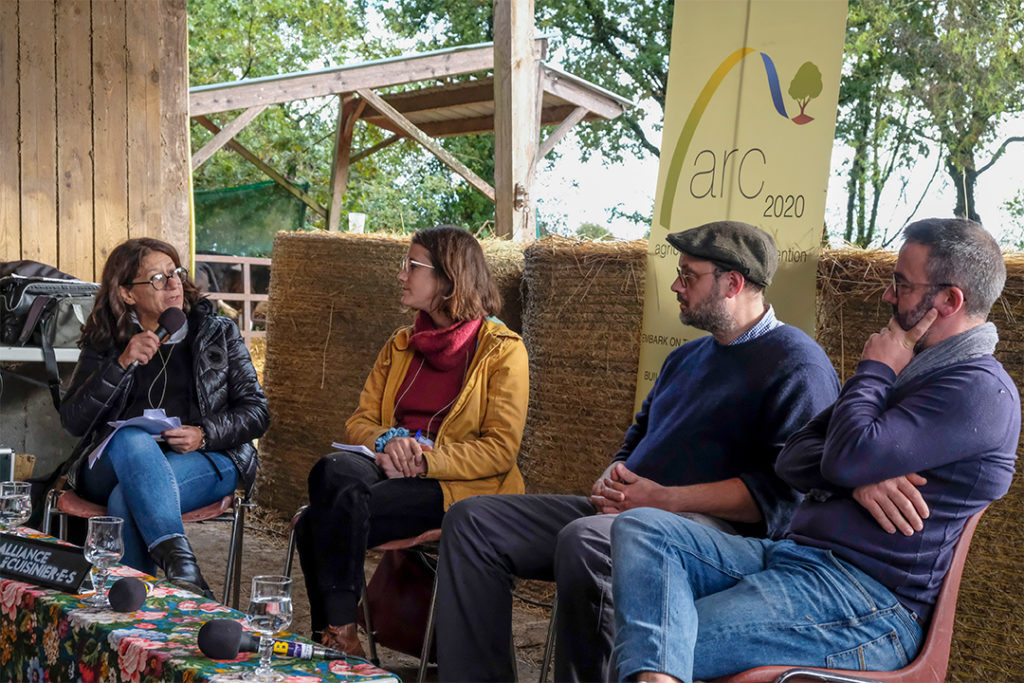 Collectives on the farm and in the kitchen. Pictured (left to right): Moderator Julia Csergo with Maëla Naël, farmer and writer, Antoine Chepy, artisan-cook, and Cédric Briand, farmer and cheese maker, and associate of la Ferme des 7 chemins, during the round table “Changing our vision from ‘small producer,’ to ‘grand restaurant.’” © Adèle Violette

On Saturday we spent the day at la Ferme des 7 chemins. Here, round tables set out to to addressing the gap between perceptions and reality. Out with the imaginary self-sufficient farm, and in with cooking collectives and a dignified standard of living for peasant farmers. The precarity of the food industry when faced with the market and globalisation: solidarity has to be reinvented together. 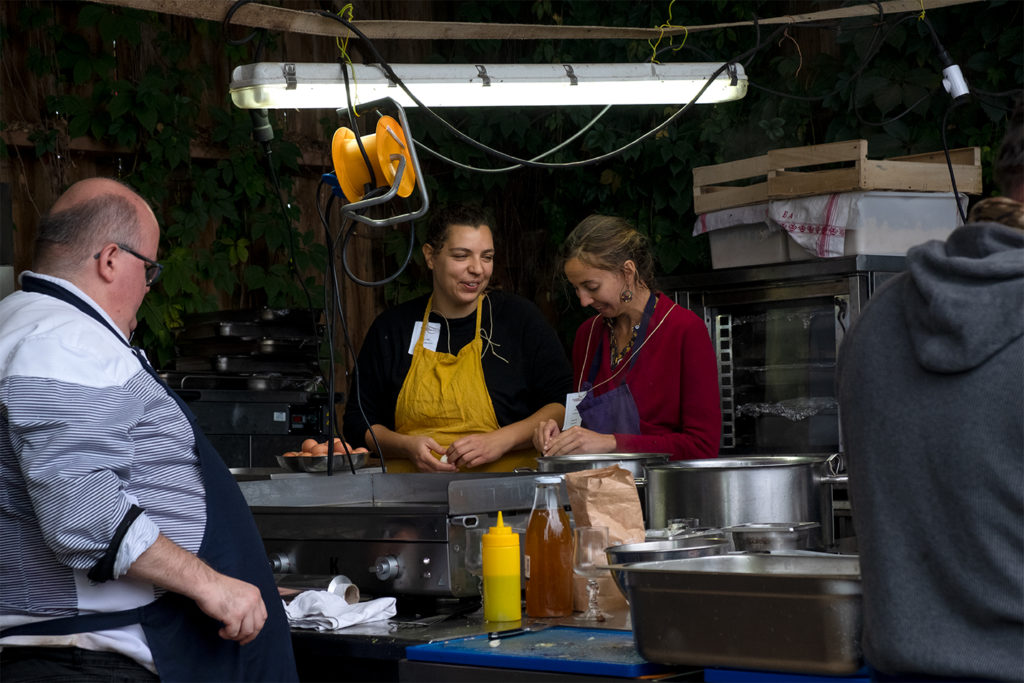 Solidarity and support: the cooks of Alliance des Cuisinier·e·s travelled from all over France to prepare a ‘people’s banquet’ for lunch on Saturday.  © Adèle Violette

Creating collective stories and trust. A collective farm is a way to weave “very strong social ties”, and becomes a “crossroads” between rural and urban, but also between social classes and professions, pointed out Maëla Naël, farmer and writer, during a round table.

Incidentally, in her response to a question about collective reponses to the challenge of access to land, Maëla referred to the SAFER agency as an amazing tool which, although it can be improved, should be developed at European level. 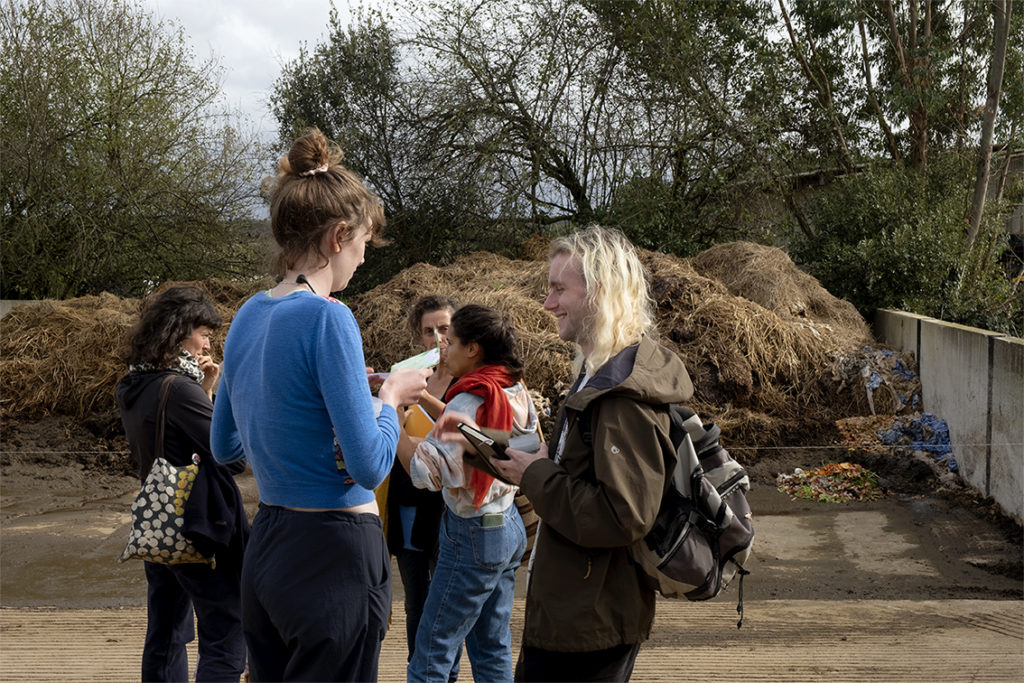 A just rural world looks like… After the round tables, space for informal discussions and exchanges. © Adèle Violette

Another round table on Saturday addressed violence and abuse in the workplace for cooks. Subjects like discrimination and decolonisation in the alimentation industry were discussed – concerns to be woven into the next generations’ tapestry of rural life. 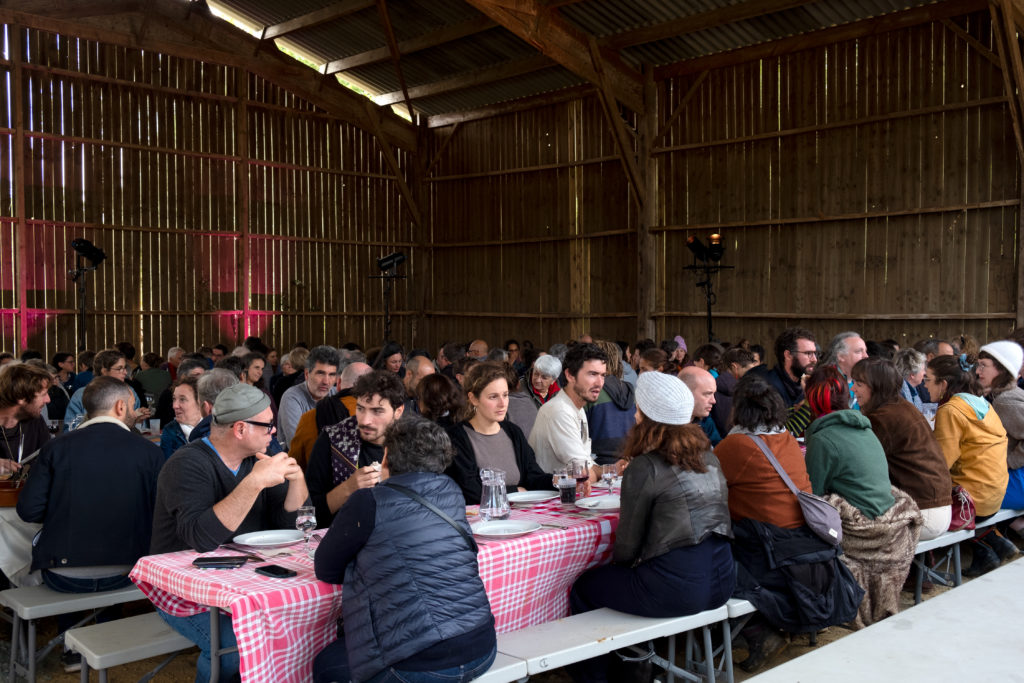 The table that brings us together: local actors sit down to lunch with participants from 12 European countries. © Adèle Violette

The weekend spent together, the discussions over local and European dishes were rich in perspectives, rich in convivial moments, and rich in human connection. By bringing together a sampling of all actors implicated in the transformation of our rural areas, the event was full of energy, full of inspiration to stay on the path toward a more socio-ecological future for Europe. 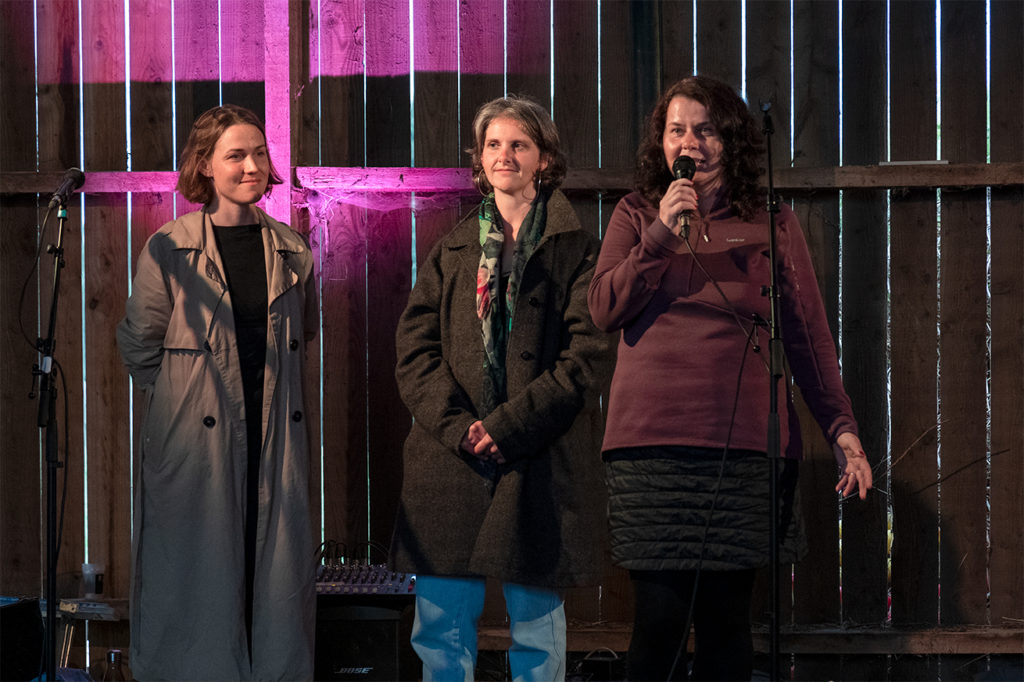 And what’s next? Saturday evening conclusions with (left to right) Katrina Idu, president of Forum synergies, Louise Kelleher on behalf of the “Nos Campagnes en Résilience” team, and Terezie Daňková, a Czech farmer who took part in the gathering. © Adèle Violette

Ride the moment together. From this gathering, new connections were forged and deeper bonds were reinforced. Working groups and ideas for new collaborations across the local, regional and European are already forming. A need for balance, a redefined social contract, and local movements inspiring and empowering other local movements has been recognized, and now it’s time for it to take root.