As Transition Together’s seed funding programme goes live, Rob Hopkins caught up with Laura Baldwin and Catherine Bennett from Portland 4 the Planet about the fabulous shoots which emerged from their grant last time round. They told him: “There are so many people out there just searching for something to do that’s positive, that’s going to make a difference. It has been a very positive experience here. It has been amazing to see how it is helping people”.

“We’ve got to make our local communities way more fulfilling, way more self-sufficient”, Laura Baldwin, former Olympic sailor, coach and founder of Portland 4 the Planet tells me. “We’re in this crisis and more and more people are becoming aware of it and being left riddled with anxiety because they’re feeling completely disempowered. This is a way of empowering people, of engaging people, of really helping with the mental health/anxiety side of things, whilst positively making the changes that we actually need to make”. And it’s positively making those changes that is the focus of the group’s work.

As one of the recipients of Transition Bounce Forward’s Seed Funding in 2020, Portland 4 the Planet is a beautiful example of what dynamic community action, when combined with little pots of funding, can unlock. Laura started the initiative in March 2019 as “my response to finding out about the climate and ecological emergency and thinking ‘what can we do to help our community try and resolve the situation?’”. Having realised the scale of the challenge, read everything she could, changed her diet, cut out plastic, transitioned to a vegan diet, her focus turned to what her community could do. 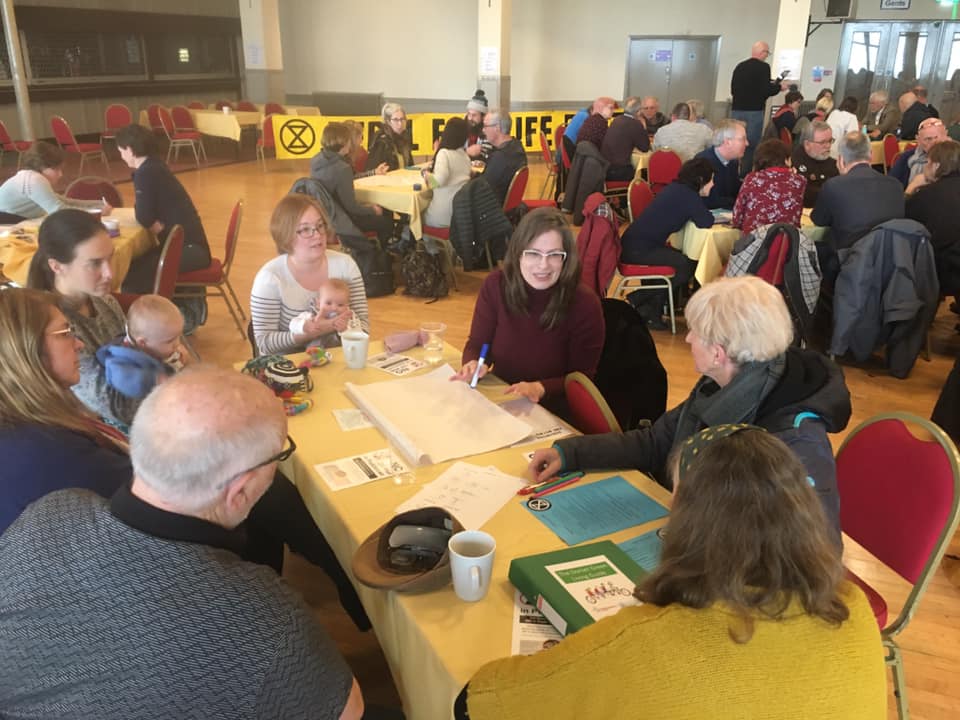 She lobbied her local council to declare a climate emergency, which they did. However, her interactions with local government made her realise that given the speed at which bureaucracies move, however willing and supportive they might be, it was best to not wait for them and to get started. She set up Portland 4 the Planet to do all the things the Council needed to do, but was unable to do itself.

In 2020, the fledgling group ran Peoples’ Assemblies in Portland, Weymouth and Dorchester. The community’s answers to the question “what should the Council do to tackle the climate and nature emergency?” were submitted to Dorset County Council. But it was the responses to the question “what can we do as a community?” that seemed to be so much more vibrant and alive. These answers formed the programme of actions the group set about trying to achieve.

They planted 3,000 trees in four sections of wildlife hedgerows along the fences of Council-owned sports fields, with groups working in single household bubbles. They worked closely with the neighbours of the fields. Many people got involved and were quite affected by being part of the plantings. 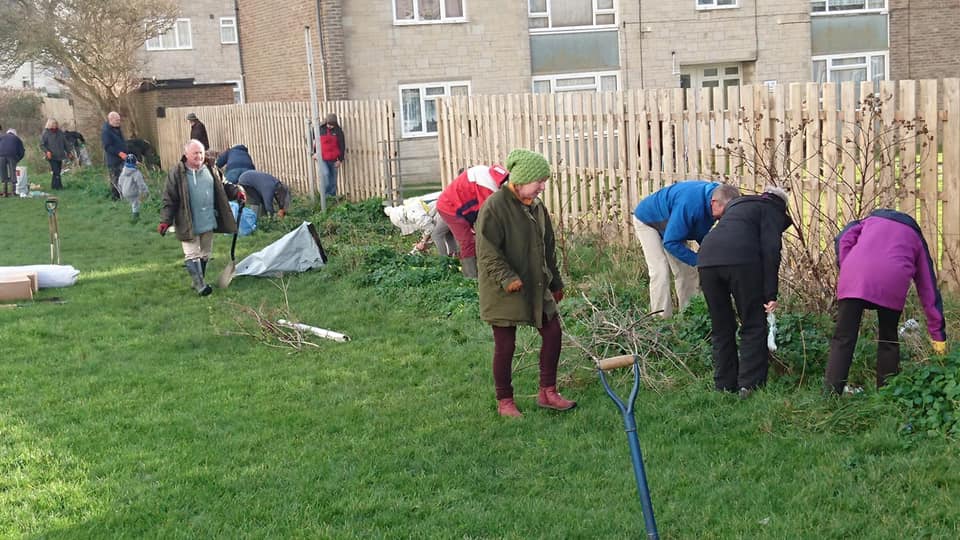 The group planted 3,000 trees, discovering it helped people’s health, wellbeing and sense of community, as well as nature.

Laura tells of one woman who had been so depressed by climate change that she hadn’t got out of bed for months. Her partner dragged her along in tears the first day; then she came back for the second, telling Laura: “I got up, I didn’t cry, I was able to get on with my day”. She kept coming back, and ended up, as Laura put it, “back into life, back into the swing of climate activism on the front line”. This kind of hands-on, practical activism had what she calls “a huge grounding effect”, not just on who attended, but on her too.

Portland 4 the Planet set about trying to increase awareness locally, giving talks to community groups, the Council, faith groups, businesses, a wide range of community groups, but presenting what’s happening in the context of a local movement stepping up to do something about it, always wanting to leave people with some hope. They held clothes swaps and an Eco Fair, although COVID killed their idea of a toy swap. They’ve also planted a number of pocket orchards across the island.

The next big step they felt should be food growing. Portland is an island, and is one of the poorest areas of the UK. There are huge issues with social isolation, which were made worse by the pandemic. Creating the opportunity for people to grow food together felt like a vital part of enabling them to connect with each other and with nature.

And so the Portland 4 the Planet Community Garden was born. On a former allotment space 30-40m by 20m (“a big area”, Laura’s colleague Catherine tells me) the group have been creating a community garden supported by seed funding. It is, as Laura describes it, “a place for planting, growing, getting muddy, enjoying the produce, as well as a space for gaining and giving emotional support”. The aim is to make the site as inclusive, colourful and artistic as possible. The shed is a clubhouse that converts into a bar. 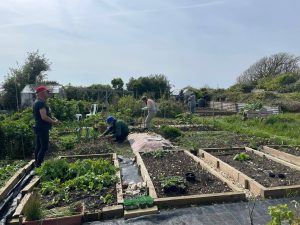 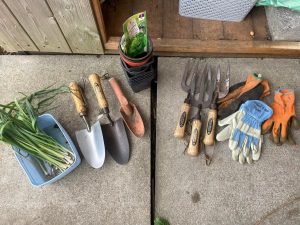 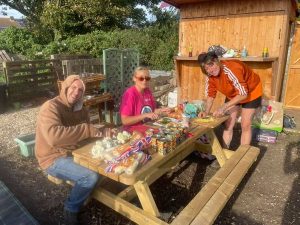 At the end of their first successful year of growing on the site, they harvested all the produce, which was cooked in various kitchens, and some of it on the site by an artist, and then all served up in a big community supper. “It is as much about the social as it is about the food” Laura says. The idea is to do this again as a monthly event.

The idea is already starting to spread. They are already starting to work with a second site around the offices of Portland Town Council. They’ve set up two planters, with plans for other things such as an old phone kiosk turned into a library for childrens’ books. Many of the ideas for the site comes from those attending the Drop In Youth Provision. It is still at an early stage, with not much to see, resourced by volunteers and donations.  There is a space they want to build a pizza oven.

So what did the seed funding make possible? It paid for the shed, aka the Club House, wooden veggie bed borders, weed matting, shingle, 20 fruit trees for the four small orchards, a notice board, tools, knee pads, gloves, seeds, fruit bushes, 4 planters, a ‘mud kitchen’ and kids’ tools, a picnic bench and a kids bench. The Portland Permaculture group (also members of Transition Town Weymouth and Portland), based at a third location benefitted from buying a strimmer and willow branches to make fencing. Laura is building a website as a central hub for information. For the community allotment the group are just buying a greenhouse, a small storage shed and another picnic table, wood oils and paint to add colours to the ‘Imagination Station’ (their seating area and club house).

“We’ve got to be focusing local”, Laura told me. “It needs to be communicated that this is an emergency growing project. We are the front line of making those changes happen. Don’t just wait and rely on the government to make those changes for us. There are so many people out there just searching for something to do that’s positive, that’s going to make a difference. It has been a very positive experience here. It has been amazing to see how it is helping people”.

Find out more about Portland 4 the Planet’s activities on their Facebook page here.

Transition Together seed funding is open to Transition groups in England and Wales until 31 October 2022. Find out more here.