Transition Southampton used seed funding to work in three very different parts of the city. Rob Hopkins spoke to Clare, Liz and Si from the group to find out how they used enticing ‘What If?’ questions and built on existing connections to help local people imagine a different future for their neighbourhoods and what emerged from the project.

Transition Southampton received Bounce Forward seed funding for their Growing Places project, supporting their work in three very different neighbourhoods of the city: St Denys, Bitterne Park and Northam. Their intention was to build the capacity of local people to imagine different futures, using What If? questions, community development principles and gardening as a way to engage and inspire people. But this required three quite different approaches and understanding the local conditions in each community.

In  St. Denys, Transition Southampton’s Clare Diaper set about maintaining and celebrating existing community projects as well as doing some creative community engagement. She was able to build on some previous work funded by NESTA. This ‘Breathing Spaces’ project had sparked Front Gardens Plus, St Denys community art, Winter Windows, street parties and the area being piloted as an Active Travel Zone in the city. 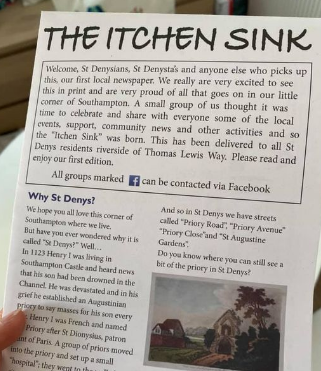 So in St Denys the focus was on celebrating existing community projects, listening to the community and building new connections. A small group of amateur newshounds decided that a local newspaper would be a good way to reach everyone in the community, sharing news, local events, history and local independent businesses. The community has a vibrant Facebook page but it didn’t reach everyone and they felt a local newssheet would. The newspaper, the ‘Itchen Sink’ (after the local river Itchen), was delivered to all 1,500 households in the neighbourhood by local volunteers. The feedback, was amazing with ideas for celebrating the 900th year anniversary of the St Denys Priory in 2023, poetry and prose submissions and the uncovering of an unusual local map, which was shared in the second edition.

The funding also allowed Clare to explore other ways of connecting with local residents and gathering their views on their local area. Because meetings couldn’t happen indoors, Clare toured the neighbourhood in an electric milk float, borrowed from a local group which couldn’t use it during COVID. They gave out teas, coffees, cakes and walnut trees (planted by squirrels in Clare’s garden!) to community members who were selling or giving away things outside their houses, at a once a month event called Over the Garden Fence. The milk float was called ‘PrioryTeas’, named after Clare’s street (Priory Road), and was kitted out to collect residents’ ideas for priorities in the neighbourhood. 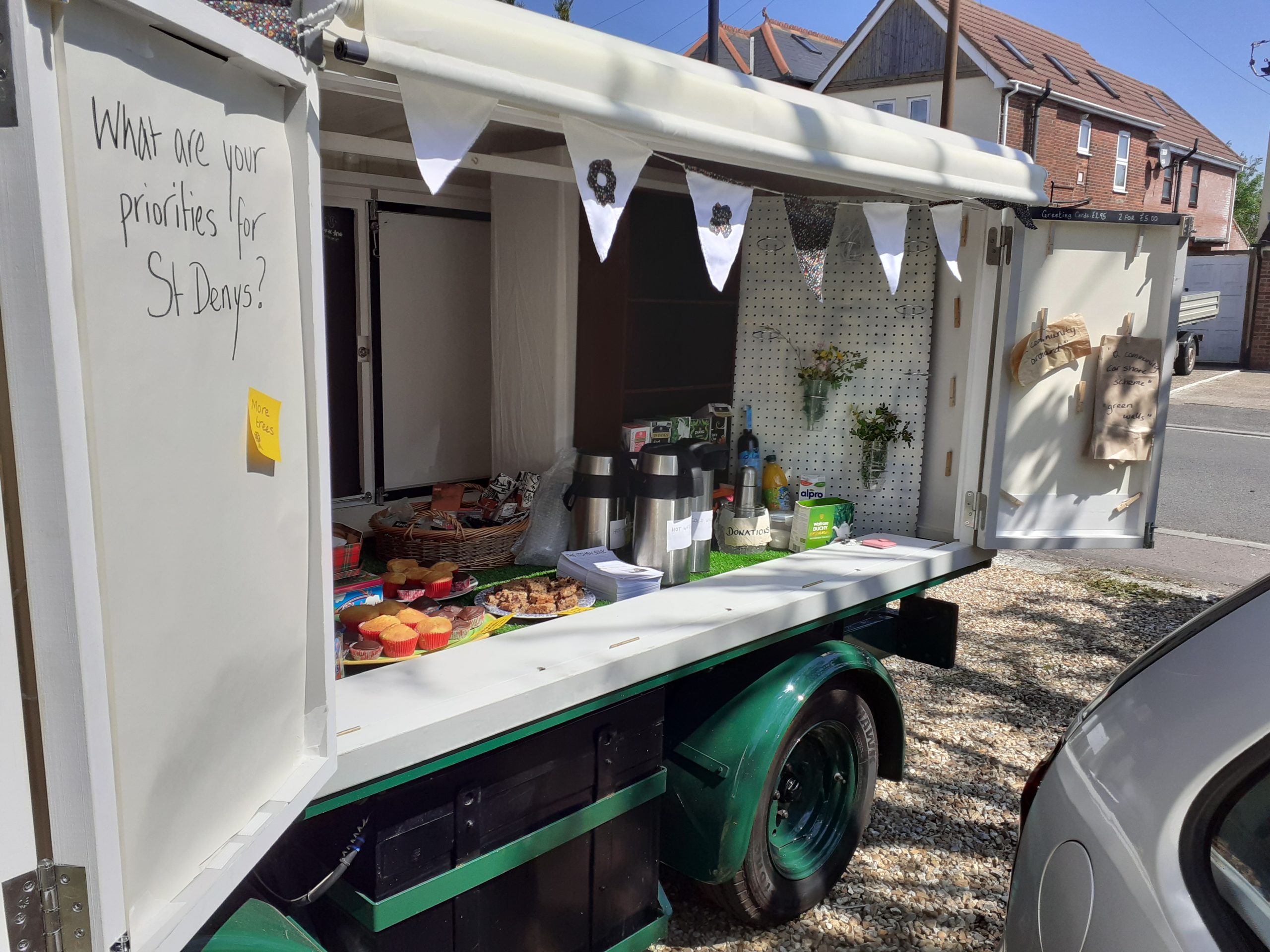 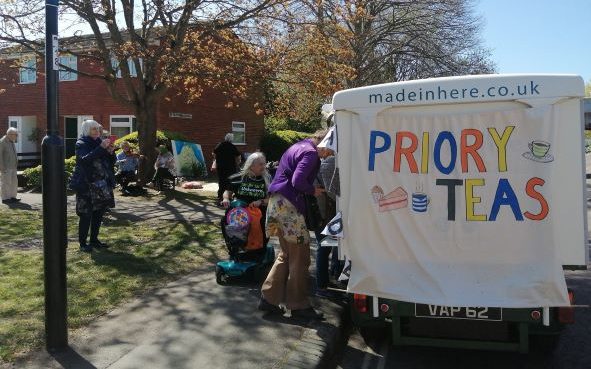 A converted milk cart allowed the Transition Southampton team to engage residents during the pandemic, building connections, giving out refreshments and inviting ideas about the future of their neighbourhood.

The milk float sparked conversations between distant neighbours and shared local information as Clare was joined by a different community activist as co-pilot on each outing. The milk float has even inspired others from outside Southampton to use this slow transport ‘vehicle of community engagement’.

In Bitterne Park, inspired by a ‘From What Is to What If’ reading group, Liz had written a short personal What If for Bitterne Park in 2030, imagining people growing their own food in whatever space they had available, sharing surplus with each other and the local food bank, creating a community kitchen and community orchard, and generally supporting each other. Using both social media and email, Liz and her neighbours started encouraging people to do just this, growing vegetables and fruit.

The original intention was to use funds to buy seeds for distribution, but a visit to a local garden centre ended up with Liz being donated a huge amount of seeds via the Cultivation Street charity. In the end over 160 families took seeds and started their growing adventure. Over 300 people joined the newly created Facebook group and newbies and seasoned growers shared their experiences through the coldest spring for over 60 years!

The first activity was to organise the big Seed Giveaway during lockdown. Next was a Plant and Seed swap in May when they used the milk float (it got about a bit!) to tour a trail of nearly 30 front gardens, swapping seedlings and meeting neighbours for the first time in ages. ‘It feels like a Treasure Hunt!’ said one participant and the trail has made many new connections between existing neighbours. 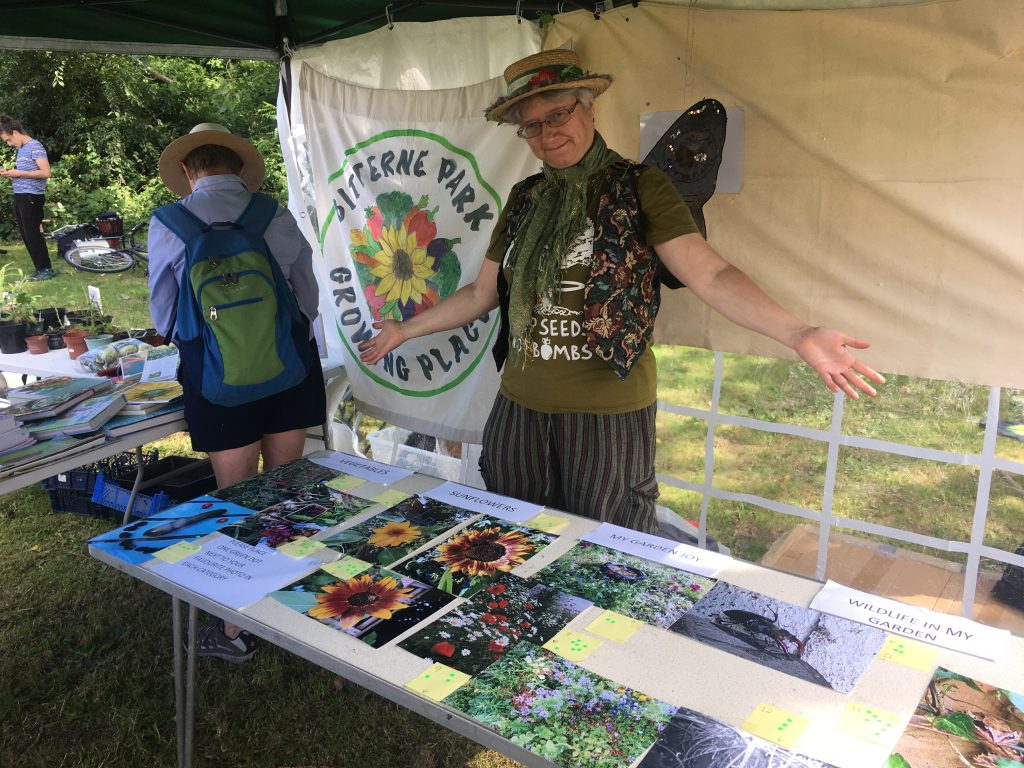 Top of the Crops was a highlight of the project, celebrating the flourishing of local food growing which had happened over just a few months.

While the cold Spring made it hard to sustain the growing community’s spirits, by August their ‘Top of the Crops’ celebration was a big success, and the project, as Liz told me, “now has its own momentum”. For Liz, the process of sharing the ‘What If’ story generated from her reading group, was magically transformed into real action on the ground in a very short time: “My vision of 2030 suddenly came true in a couple of months!”

In addition to Liz’s growing project Si set about gathering the imaginings of people in Bitterne Park online and in a The Postbox of Imagination where people could post their ideas when it pops up around the neighbourhood. The team also had a stall at the local riverside festival in August, when they debuted The Amazing Time Machine, which transported people to 2030. The community’s ideas on the day were made into a video to be shared with both the community and policy makers. View the brilliant results here.

The third neighbourhood of Northam presented more of a challenge in finding ways in. The community had been subjected to many rounds of conventional consultations processes leading to very little change on the ground. Rather than launch another consultation process, they took a different approach. Growing Places worked with a new project, Home:Grown SO14, and connected with the community through an existing gardening project, and used this  as a way to unlock imaginative conversations.

In all parts of the project the Transition Southampton team worked with local creatives. Local artists Sarah Filmer and Claudia Friend made banners and set up a workshop to paint the Postbox of Imagination. Paul Maple, a local videographer, made the short films and local printers for producing the local newspaper.

While engaging communities of multiple deprivation in the city has been complicated, and the work of Growing Places has, at this stage, been mostly the work of exploring and initiating conversations, Clare tells a beautiful story about the insights that can arise from listening:

“One day we were clearing weeds and overgrown plants at a community garden. I got talking to someone, originally from Cameroon. She was wrapping sprigs of rosemary together with twine made from grasses.. ‘We don’t want to waste the rosemary that we have cut back, it will make great room fresheners and keep insects away’ she said. We got talking and she shared some stories from her home country and said that she was sad that she couldn’t take her children to the headwaters of the river in Southampton, something they would do as a family to taste the fresh spring water in Cameroon. That made me wonder….  What if we could drink from our rivers and streams? And to think that we need to listen and to hear what others are really longing for. I am sure this wouldn’t have come up in any of the traditional consultations with the residents in this neighbourhood.”

Transition Southampton initially began in 2008 and was set up with the ‘classic’ Transition model, with working groups on different subjects. Liz Batten from the group told me, the group ‘hit a wall’ with a lot of burnout. “We all thought we were doing a PhD in everything you needed to know” she said. In 2016, bolstered by Clare’s arrival from doing Transition in Australia, the group found a new burst of energy, and put on a series of workshops under the heading ‘Imagine Southampton’, which invited participants to vision and imagine the future.

‘Imagine Southampton’ was incredibly successful, and, as Clare put it, “its implications are still rippling out”. For Liz and Clare, facilitating the workshops was a steep learning curve “we had to learn to let go of the agenda, and lose our historical facilitation style, truly handing over to the participants” said Clare. When you do that. Clare told me, “the energy balance changes”. 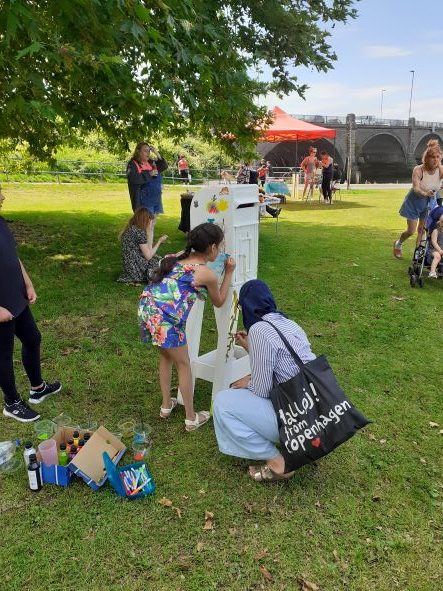 The Postbox of Imagination in action.

Once Growing Places project funding ends, and all the consultation and conversations from across these neighbourhoods have been collated and mapped, I asked Clare what next? The intention is to share it back with those who participated, and with other communities across the city, encouraging others to imagine 2030. Also, they plan to share the outcomes with our local council with the aim of prompting policy change in the city.. The thinking is also rippling out. Clare shared how the threads of conversations from the project are being picked up in other suburbs of the city and beyond: The local artist interested in using maps to encourage connection to place as a result of seeing the map in the Itchen sink; the milk float being commissioned to provide refreshments at the opening of a community mosaic trail in another neighbourhood: other areas wanting to have seed and plant swaps and an Imagine 2030 event being held in Northam with a video of people’s imaginings. (Check it out here) “All these things will seed more conversations about how we can do things differently in our city,” she said.

I asked Liz and Clare for their advice for other groups thinking about applying for this next round of Seed Funding. They told me firstly have a good knowledge all of the things already happening so you connect in with that rather than replicating what already exists. Clare also suggested that not being tied into a set way of doing things is also so important, having the courage not to stick to a rigid plan that was decided at the start of the project, to go where the energy is. It’s a suggestion that she argues makes the resultant work much less strenuous and much more fun in these uncertain times.