By focusing on reciprocity and the common good—both for the community and the environment—sea gardening created bountiful food without putting populations at risk of collapse.

For those who know how to read them, the signs have long been there. Like the towering mound of 20 million oyster shells all but obscured by the lush greenery of central Florida’s Gulf Coast. Or the arcing lines of wave-weathered stone walls strung along British Columbia’s shores like a necklace. Such features, hidden in the landscape, tell a rich and varied story of Indigenous stewardship. They reveal how humans carefully transformed the world’s coasts into gardens of the sea—gardens that produced vibrant, varied communities of marine life that sustained Indigenous peoples for millennia. And in certain places, like on the west coast of North America in what is now Washington State and where the Swinomish are building a new sea garden, these ancient practices are poised to sustain them once again.

Across the planet, Indigenous communities, from the Heiltsuk in British Columbia, to the Powhatan on the Chesapeake Bay on the United States’ Atlantic Coast, to the Māori in New Zealand, have successfully stewarded the sea for thousands of years. These communities avoided diminishing their productive sea gardens despite, in some cases, seeing harvests that rival modern commercial fisheries.

The scale of historical Indigenous oyster gardening, for instance, cannot be overstated. On America’s southeastern Atlantic coast, in the modern states of South Carolina, Georgia, and Florida, Indigenous peoples whose descendants include the Muscogee built gargantuan monuments out of oyster shells. These structures could reach 30 meters high or more.

says Torben Rick, an archaeologist at the Smithsonian’s National Museum of Natural History. The monuments were deeply significant, serving as sites for human burial, feasting, and other ceremonies and rituals. 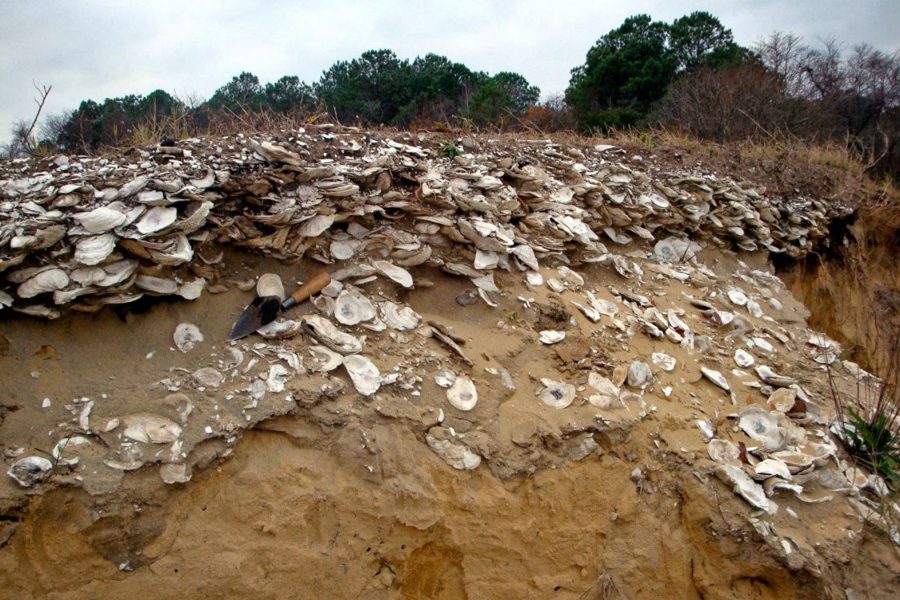 Shells from oysters or other species reared in sea gardens were sometimes used as a construction material to build buildings or piled high to change the shape of the terrain. Photo by Torben Rick, Smithsonian’s National Museum of Natural History

In 2004, scientists studying historical overfishing published a study showing how, starting around the 19th century, oyster stocks suffered a “moving wave of exploitation” that traveled down the Atlantic and Pacific coasts of North America and the eastern coast of Australia. The capitalist commercial fisheries that arrived with European colonization and settlement, Rick says, undid thousands of years of sustainable prosperity. “Within 50 years, 100 years, maybe even less in some areas, they’ve depleted that stock.”

But to Rick, that modern narrative of rampant decline is only part of the story. By focusing on the past few centuries, that paper—and many other important scientific studies and conversations—overlooks the ways in which major Indigenous oyster fisheries managed to sustain mass productivity for millennia. Paying these fisheries more attention, says Rick, could have far-reaching implications for restoring and managing the flagging oyster populations left today.

To fill in the rest of the story, Rick assembled a diverse, multidisciplinary team of researchers to revisit the history of oyster fishing in the same places as in the 2004 study, but they started their clock in the 1800s and looked backward.

Relying on archaeological and ethnohistorical records, the team followed how changes in the natural world—such as the thawing of glaciers more than 11,000 years ago and the stabilization of sea levels thousands of years later—created an abundance of estuaries and an explosion of intensive oyster harvesting by Indigenous communities for 5,000 to 10,000 years. Through this and other insights, the team is redrawing the historical ecological baseline for these oyster stocks.

The work adds to scientists’ growing understanding of the diversity and value of Indigenous approaches to marine stewardship. Like the oyster gardens, similar systems show up again and again around the world, from Native Hawaiian loko i‘a (fishponds) and Haida Gwaii naw náaGalang (octopus houses) to the shi hu (stone fish traps) of Taiwan and corrales de pesca (fish traps) of Patagonia. These and other examples are being cataloged by a broad collaboration, known as the Pacific Sea Garden Collective, that is working to map this diversity of Indigenous sea gardening innovations across the Pacific Ocean.

In her own work studying historical Indigenous clam gardens on the North American west coast, which date back at least 3,500 years, Anne Salomon, an applied marine ecologist at Simon Fraser University in British Columbia, has noted some of the key techniques that led to these bountiful yet restrained returns. People would till the sediment, replenish shells in the water, and construct low intertidal rock terraces that flatten the shoreline and expand the farmable area. In parts of British Columbia, clam gardens were packed across nearly all available coastal real estate, she says.

“Those would have been hubs of major production, but each clam garden itself is relatively small.”

To Salomon, who is involved in the Pacific Sea Garden Collective, the intensive nature of some Indigenous sea gardens is fundamentally different from the maximum sustained yield mindset of today’s capitalist commercial fisheries. Archaeological evidence, paired with Indigenous oral histories, Salomon says, shows how by focusing on common reciprocal, relationship-based principles and governance practices—ones that sustain individuals, communities, and their environments—Indigenous communities often made decisions that led to huge harvests while also putting some limits on the scale at which that intensification was happening.

These gardening efforts included a continuum of features, such as seasonal or size limits on harvest, that may be invisible to the eye, Salomon says. And as Marco Hatch, a member of the Samish Indian Nation and a marine ecologist at Western Washington University who was involved in Rick’s study of oyster gardens points out,

“All of these practices, I think, are centered around this idea of growing food and growing community,” says Hatch.

A community focus—passing on traditional knowledge between generations and improving health through access to local foods—is at the heart of the effort to build what is likely the first modern clam garden in the United States.

Inspired by sea garden restorations led by Indigenous communities in British Columbia, the Swinomish Indian Tribal Community has just received permits to start raking sediment and rolling rocks at a site on its traditional tidelands on Kiket Island, roughly 125 kilometers north of Seattle, Washington. For years, tribal members were chased away with guns and dogs and prevented from harvesting in the area, says Swinomish tribal member and shellfish community liaison Joe Williams (Squi qui).

“It’s a very special time for us to be able to reacquaint with this particular location,” he says.

This sea garden should help address recent declines of butter clams, littleneck clams, and Olympia oysters, and help those populations adapt to climate change. Historically, Indigenous peoples would shift the locations of clam garden rock walls as sea levels changed. Gardens also protect clams against ocean acidification and potentially against extreme temperatures. “It’s like a playbook for us that our ancestors left us to get through climate change [and] sea level rise,” says Williams.

While such efforts will take time to bear fruit, the resilience and impressive productivity of past Indigenous oyster fisheries gives Rick hope for improving future conservation and management. But he emphasizes that reconnecting disenfranchised Indigenous peoples with their traditional lands and bringing them back into decision-making will be essential to restoring oyster populations. Hatch agrees: building a sea garden “without the descendants of the people that initially built it is missing the point.”

Teaser photo credit: On Calvert Island, British Columbia, the subtle rock line of an extant clam garden is a reminder of how Indigenous peoples turned the sea into a shellfish garden. Photo courtesy of the Hakai Institute