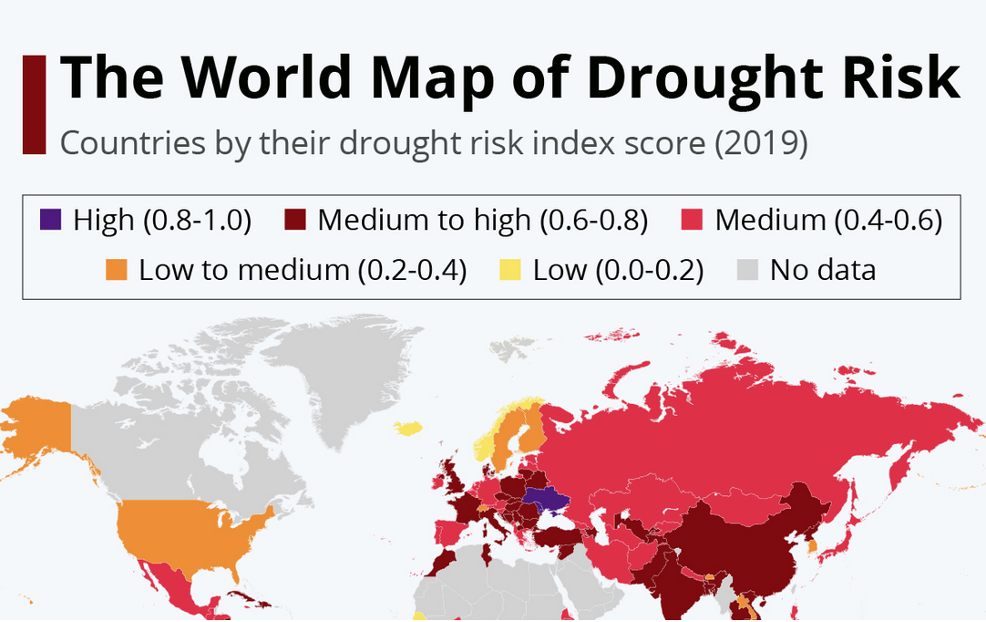 That we live in a world of momentous upheaval and rapid change is not news. What is unprecedented is the scale to which climate change is upending long-held assumptions about how our societies and economies function, including our geo-political order, and is guaranteed to ramp that up for decades to come. One way to make sense of this turbulence is to remind ourselves we have always lived on a planet which is a complex adaptive and self-regulating system, which like all such systems, is prone to occasional, sometimes violent disruption. However, we have taken the largely benign conditions the planet has created for life for granted. For too long we have assumed that our human planning could ‘manage’ drought, fires, floods, hurricanes, polluted air and seas, resource depletion, biodiversity loss, failed harvests, pandemics and all the other realities that now confront us. But the game has changed. If we remain blind to the fact that Gaia (in the guise of mighty natural forces) has taken a seat at the table and her terms are non-negotiable, we will be blind-sided again and again. Human systems can be gamed for short-term gain, geo systems cannot.

Last summer Gaya Herrington, a Dutch adviser to the Club of Rome and a sustainability analyst at the accounting firm KPMG, decided to rerun four key scenarios in the landmark 1972 MIT study by Dennis and Donella Meadows, The Limits to Growth, using current data. In the updated Limits to Growth paper she confirmed the worst case scenarios: the world faces social collapse by 2040 if we continue on our current trajectory of pursuing economic growth. And yet all is not lost she concludes if we act now and turn our attention to another goal than growth and pursue another scenario than Business as Usual. If we model social tipping points, both negative and positive, at local, national and global scales it makes it possible to plan for a Sustainable World (SW) future.

‘A transformation of societal priorities, together with technological innovations specifically aimed at furthering these new priorities, can bring humanity back on the path of the SW scenario……a deliberate trajectory change brought about by society turning towards another goal than growth is still possible. [But] that window of opportunity is closing fast.’

Flying in the face of that, commodities futures markets are wreaking havoc on state planning for a sustainable world. In the timely reveal of Price Wars: How the Commodities Markets Made Our Chaotic World, Rupert Russell exposes how market betting on stores of value in commodities such as food, metals and energy is driving both geo-politics and armed conflict. Tim Sahay’s recent review of the book in American Prospect  How High Energy Prices Emboldened Putin – The American Prospect makes the point that ‘the Kremlin had been planning the invasion (if not their own military readiness) of the Ukraine for months, and the timing coincided with a run-up in energy prices and tight commodity markets that gave Putin major strategic leverage.’ The deregulation of commodity markets via the US Commodity Futures Modernization Act of 2000 in which Alan Greenspan had a large hand, and was signed into law by Bill Clinton, meant that investors in global markets could now bet on commodity futures. Hot bets were not necessarily anchored in the reality of production levels: the scarcer a commodity the more attractive it became as an investment. Most commodity derivatives are not regulated. The act exempted the trading of futures contracts and swaps for energy and metals from regulation. As Sahay notes:

However, in this complex gaming of worldwide resources and human systems there are non-negotiable geo systems on the table. The spring sowing of wheat in Ukraine has been disrupted by lack of seed corn, fertilisers, pesticides and fuel for tractors through shelling, military convoys on the roads, and the call-up of able men into the Ukraine army. The radically diminished harvest this autumn will send short-term global wheat prices sky-rocketing. What is not being pointed out is that in the long term the black gold of Ukrainian soil is under threat from drought caused by climate change that will raise temperatures to unprecedented levels and disrupt rainfall patterns. On the 2019 Statista World Map of Drought Risk, Ukraine (after Moldova) comes top of the charts. Long-term risk is a quantifiable thing but in the current ‘winner takes all’ market mentality the destruction of value by foreseeable risk is largely ignored.

Our current investment norms of value and risk, almost without exception measure fixed things: commodities and resources that have value for humans in the present or the future. Even holistic measures such as the five capitals (manufactured, natural, social, human, financial) that give us a broader framework for return on investment, are defined in terms of materiality. In other words, those capitals an organisation uses and/or affects that are of importance to stakeholders. While this lens is more holistic, the organisation is still assumed to be ‘acting upon’ its environment, not in interrelationship with it. What would an investment framework look like that brings into an investment project not only fair and proportionate management of those capitals ‘material’ to it, but also includes in the group of impacted stakeholders with whom vital capitals are shared all those who have a vested interest in releasing the potential value that the investment project can realise in its wider landscape or bioregion? Said differently, can such a framework measure a return on investment through growth in three essential capacities of living systems, in this case the landscape and bioregion: its vitality, viability and its capacity to evolve? The goals we set for all three are drawn from understanding what ends are possible if a landscape and bioregion could fully unfold its potential.

We can further argue that a consequence of ‘living systems’ thinking is to see the investor not as separated from, but rather an integral and dynamic part of the invested project, nested within the wider systems of landscape and bioregion. This means bringing the investor into direct relationship with the unique place being invested in, along with its stakeholders: community groups, landowners, business groups, local government etc, thereby creating a guild of stakeholders in a collective endeavour we call in regenerative practice ’co-evolving mutualism’. Investment need not be just handing over money, it can be a developmental pledge to engage in a process full of meaning and purpose beyond simple exchange.

Vitality, viability and the capacity to evolve are being destroyed in Ukraine despite the right to life being enshrined in the Geneva Convention. This has consequences for vitality and viability elsewhere on our connected planet: food shortages and hunger as well as the trauma of millions of displaced people. The regenerative norm we are exploring in this enquiry paves the way to hope, to intentional behaviour change, planned interventions and positive tipping points. Facing off in the other corner of the boxing ring is the market norm, represented by commodity futures markets with a high capacity to lead to unplanned, chaotic interventions in geo systems and non-linear responses with negative tipping points that are hard to reverse. For Professor Tim Lenton and colleagues’ research paper that makes the case for a focus of attention and energy on positive tipping points see: Operationalising positive tipping points towards global sustainability.

The call to act collectively is urgent. This April the IPCC produced its most recent report on the mitigation of climate change: Climate Change 2022: Impacts, Adaptation and Vulnerability. Yet despite ever more urgent calls to arms and an array of pathways to action we find ourselves in a precarious balancing act with life. Freshwater supplies around the world are becoming compromised by decrease in supply due to climate change on the one hand and increase in demand due to population growth on the other. Topsoil loss due to heavy rainfall or desertification—both consequences of climate change—are reducing our ability to feed ourselves. The overfishing and degradation of our oceans is removing a vital food source for many coastal communities. Unless we can learn and adapt faster than the rate of global systems change, our viability—the basic necessities for human thriving (nested within the imperative of thriving ecosystems and biodiversity) will dwindle to the point at which they cannot sustain us. This dynamic equation between the rate and trajectory of climate change and rate of human innovation and adaptation, with the ability to adapt and take systemic, collaborative action at the fulcrum, is a way of understanding value that the authors of this blog are currently exploring at bioregional scale.

This blog and enquiry came into being thanks to John Fullerton at the Capital Institute who posed the challenge of finding a way to demonstrate how Bioregions act as a framework of value. In particular, we have drawn on his paper FINANCE FOR A REGENERATIVE WORLD Act III and the idea of Integrated Capital.

Background to this ongoing enquiry:

Our starting point is the question ‘Gaia is changing the rules of the (human) game. How does regenerative investment at systemic landscape scale need to respond so that human adaptation moves faster than the pace of geo-systemic change?’ What can seem unmanageable at global scale becomes more amenable to being tackled when brought down to landscape scale. Projects for social and economic change around the world are increasingly turning to bioregions as the scale to act at. We are not alone in wondering what value we can place on the capacity of communities of all kinds to rapidly learn and adapt in order to increase vitality, viability and capacity to evolve. And asking: What kind of investment is needed for systemic regeneration of landscapes? What returns do we see? How can we express that as a dynamic store of value and how do we amplify that store?

This work builds on the Devon Doughnut, Bioregioning, Regenerative Development and Design and current funder strategies for place-based systemic change. It is funded by the organisation r3.0 as part of the collaboration for Blueprint 8: Funding Governance for Systemic Transformation. Isabel and Paul collaborated on the blog Design for a Regenerative Doughnut and are now extending that thinking to include the add-on value of investment in one sector, system or place within a bioregion creating additional value in related sectors, systems and places both within the bioregion and beyond. We are pulling together a set of regenerative principles, goals and metrics for decision-making around the creation of place-sourced value. From that we will develop a set of criteria for investment that could be of use to philanthropy, trusts and foundations, venture capital or local communities, bringing a systemic frame to ESG (Environmental, Social, Governance) investing and relating results to on-the-ground impact.

Most of the innovation for adaptation to climate change is being led by small organisations working on a shoestring at local scale. Close to the ground, they can see and make a case for bioregions as a framework of value, but the language and metrics for this have not been well developed. Our response, outlined above, will be presented at a round table of critical peers this summer and through their reflection and feedback we will further refine the prototype framework. We are charting our progress through blog posts and will publish the next blog in June 2022.

Teaser photo credit: The Avon Gorge and Clifton Suspension Bridge, looking south from the Downs. An example of a bioregion. By The original uploader was Steinsky at English Wikipedia. – Transferred from en.wikipedia to Commons., CC BY-SA 3.0, https://commons.wikimedia.org/w/index.php?curid=3342254