This illustration by design firm Bevan and Liberatos caught my eye when it was shared on Facebook by ThreadATL, an Atlanta advocacy group that promotes good urban design. It illustrates two different ways of achieving the exact same urban density. One represents the archetypal “Texas Donut” apartment complex—a style of building that fills up an entire city block, with a parking garage hidden in the center (so called because it typifies Dallas’s recent apartment boom). The other illustration depicts a traditionally developed block in the historic district of Charleston, South Carolina. The advantages of fine-grained development should be familiar ground to regular Strong Towns readers: See, for example, here and here. But the Bevan and Liberatos illustration provides a good opportunity to revisit. The difference exhibited by the Charleston block versus the Texas Doughnut is at the heart of what we mean when we talk about incremental, traditional development, and it’s worth contemplating the advantages of the traditional approach.

Many Owners, Not Few

How many different owners likely own the property in the bottom (Charleston) block? How about in the top (Texas Donut) one—and why does this matter? One reason is the resilience, or antifragility, and the adaptability of the resulting place.

That Charleston neighborhood can grow to host an eclectic mix of owners and residents. Some might occupy their own homes; some might rent them out. Some might maintain their property better than others. Some might make additions or modifications. Some will plant gardens, some will have lawns, some paved patios. All this eclecticism will result in a bunch of natural experiments in what makes a great place. A bad building, in this setting, can’t do nearly as much harm as if a building spanning an entire block is poorly designed and creates an unappealing environment. A poorly designed Texas Donut can deaden street life for a generation.

The big Texas Donut apartment building has one owner, although it has many tenants. This may work fine when it’s shiny and new, little to no maintenance is necessary, and rents are profitably high. But what happens over time in a neighborhood that has a bunch of these? What if the property management is shoddy, or maintenance is deferred, or the owner goes bankrupt, or the neighborhood takes a downturn? The scale of the resulting blight quickly becomes a (literally) big problem.

Or, on the flip side, the sale of a large building like this to a new owner who jacks up the rent, or evicts the tenants and redevelops the property, creates an instant displacement crisis. In contrast, the whole block in Charleston, with its dispersed ownership, is never going to change hands all at one time—there is greater stability in that respect. 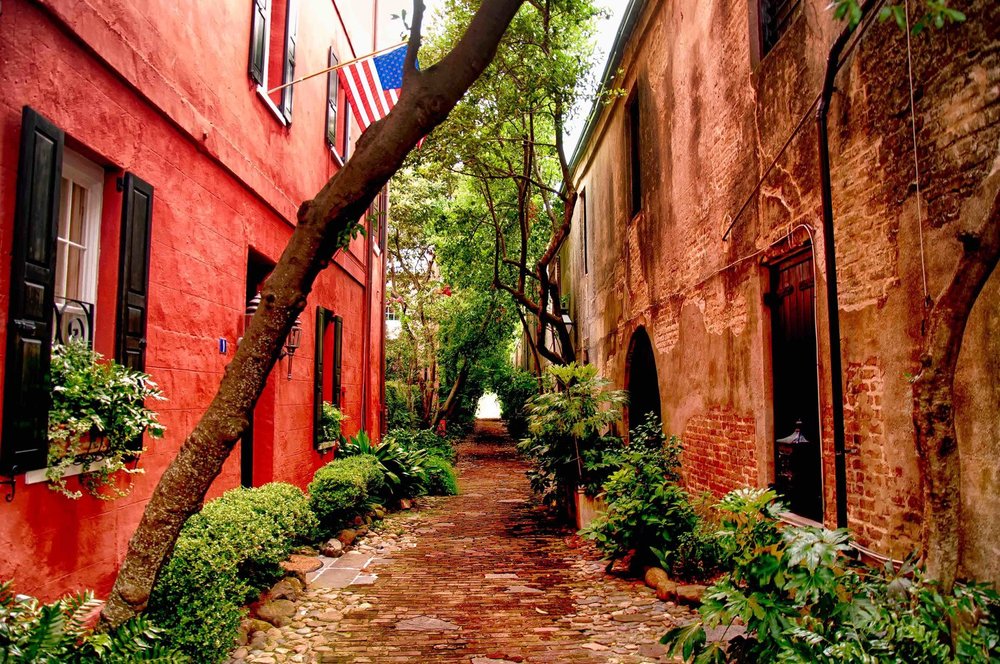 The Charleston block, as a general rule, has a more human-scaled urban form. Instead of a single, unbroken building wall that extends for an entire city block, the streetscape is punctuated by gaps between buildings, which can contain greenery, serve as recreational space, or provide passage to people on foot.

The traditional development pattern, as seen in Charleston, also creates a greater number of owners who have the opportunity to accrue a bit of wealth from property appreciation—though no one owner gains nearly as much. In a neighborhood made up of “Texas Donut” development, you can’t hope to own property unless you are a multimillionaire investor. But in a fine-grained, traditionally developed area like Charleston, the cost of entry is much, much lower. This is especially true if the local zoning regulations are flexible enough (as they should be) to allow things like a duplex conversion or accessory dwelling unit.

This low cost of entry applies to businesses, too. If you want to open a coffee shop, salon, or law office in a place like that Charleston block—assuming the zoning code allows it, which is a big “if” in most of America today—you stand a much better chance of finding a small space that suits your needs. The large Texas Donut apartment building may have ground-floor retail space, as well. But there’s a good chance the owner of a building like that, with a standardized, risk-averse business model, is looking for a national chain to fill the space, and may even prefer to leave it vacant than to lock in a local tenant at the lower rent that a local business can afford. 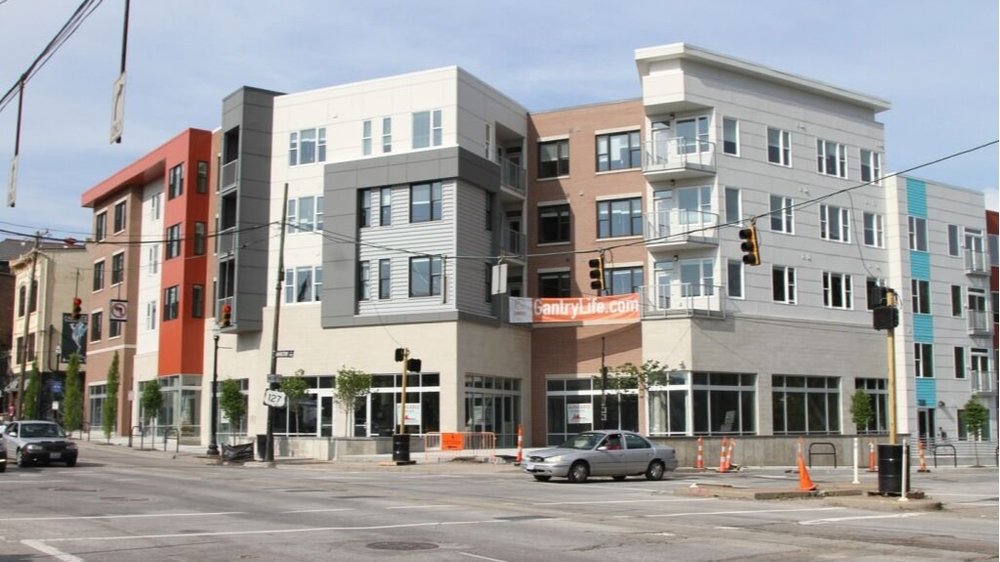 The Traditional City: Many Developers, Not Few

Whose decisions determine what your city looks like? How many different people are involved in those decisions? These days, “developers” wield outsized influence, and “developer,” to most people, means someone who builds stuff that looks like the above photo.

The traditional city, prior to the era of master-planned subdivisions and Beige Box Revival apartment buildings worked quite differently. This is not to say that it was an equitable or democratic place in all senses: The Gilded Age in America, which much of our beloved pre-automobile urbanism dates to, was a grossly unequal society (especially for women and people of color) that few would want to return to.

This might be true in some places, but only because land values are artificially high (due to the huge increment of development). Development of random towers stagnates markets and makes them regulatory-centric, not demand-centric. https://t.co/UwdvZvOeXJ

But the number of hands that got to build something and make crucial decisions about how and where their city would expand was far, far greater than it is today. Urban design wasn’t dominated by big corporate “developers” in the modern sense. Traditional cities expanded incrementally by replication of existing patterns—building on what was already working. All you had to do to be a “developer” in that context was buy a plot of land and put a building on it, or expand or renovate an existing building.

In the incremental city, there are hundreds of small developers working at any one time, rather than a few big developers running the show. This means more people’s choices and preferences play into what the city looks like. It also means that bad experiments get weeded out much more easily.

It’s a truism that the invisible hand of the market—or call it the emergent wisdom of the crowd, if you’re averse to “market” rhetoric; they’re the same thing—makes better decisions than any individual or small group in power, no matter how visionary they may be. You know those experiments where a crowd is asked to guess the number of gumballs in a jar, and when their guesses are averaged, they get it right to astonishing precision? Even though no one person’s guess is that close?

2,000 small-scale developers can produce emergent answers to questions like, “How much housing does this city need?” or, “What’s the right mix of commercial and residential?” or, “What’s the right mix of single-family and multi-family housing?” 20 big developers, on the other hand, will likely misjudge to some extent. What a lot of pro-market folks don’t understand is that the invisible hand is really just a large number of real, visible hands. The whole idea is a consequence of the Law of Large Numbers: it depends upon there being many actors in a market, none of whose decisions have outsized influence.

Some would look at the Texas Donut building and see efficiency. They might see the single owner as a plus, not a minus—after all, that allows for professional property management, and scale economies in construction. And housing advocates often see such projects as crucial to solving the affordable housing crisis in America’s expensive cities, because a big developer can push through the political process and NIMBY stonewalling and create a number of homes that makes a real dent in demand overnight.

The problem with this is it’s not actually true that big projects are what we need to solve housing problems at scale. A flood of little projects can do better—and focusing on the big projects often deters the little ones, or sucks up all the market demand and makes the little ones non-viable.

In fact, allowing many, many small projects can allow a city to grow in a more fluid way, and just as fast in absolute numbers. Chicago, in the late 19th century, grew at an astonishing rate of 9% per year, going from 30,000 to 1 million residents in four decades.

More recently, urban planner and Strong Towns contributor Nolan Gray points out where most of the new housing creation in Queens, New York occurred in the 1990s—and it’s not where you think:

Demolitions are welcome but not necessary. Most new unit production in SFH neighborhoods involves subdividing existing floor area into two/three units. Very cheap to do, at most requiring an addition or conversion of unused space, creating units that are immediately affordable. https://t.co/VFXz5Kl20t

Take Queens: if you didn’t know any better, you’d think all the housing production was happening in Long Island City. ~15k units in a decade. Big, visible…

…Meanwhile, Queens added 48k units informal units in subdivided homes during that period. 73% of unit production in the 90s! And that’s not including the many tens of thousands of units legally added in subdivided homes. All housing that’s affordable from day one.

Here’s the bottom line: Incremental development doesn’t mean slow, small, or cautious. Incremental means many hands. The “increment of development” is how big each project is, but says nothing about how many projects are taking place.

In the city I’d like to see—and the one envisioned by the Strong Towns approach—while there may be a place for towers, smaller-scale development is where most of the action is. It should be dead easy to get a permit to turn a house into a duplex or triplex. Or build a backyard accessory dwelling unit. You wouldn’t need to go through a lengthy zoning process, public hearing, or anything like that. And in a neighborhood already full of apartment buildings, want to build another one like them, or even a bit bigger or taller? Go for it.

Would this unleash a flood of traditional (Charleston-style) development in places where the market is ready for it? It’s not that simple, but why not give it a go? We hardly have a flood of big beige box construction right now in most cities—we have it in carefully circumscribed locations where we’ve decided it’s allowed. Whether or not that’s where it makes the most market sense. That’s a fragile way to grow.

(Cover illustration via Bevan and Liberatos.)