In this blog, AgroecologyNow researcher Chris Maughan shares his reflections about the creative ways in which the South West Grain Network (UK) works with different actors along the supply chain to recreate localised grain systems that maximise agricultural diversity, foster collaboration and operate on a human scale. In particular, he describes the network’s current experiments on selecting wheat varieties for cultivation by simultaneously taking into consideration agronomic, milling and baking criteria. Relatedly, he also makes the case for the need to develop new methods for assessing wheat and flour that are compatible with agroecological grain production and artisanal baking.

How do you bring diversity back into a sector defined by uniformity?

How do you bring the bodily and the sensory into an industry obsessed with abstract metrics?

How do you collaborate in a diverse network defined by siloisation and separation?

Sometimes a system is so broken that it can seem easier just to start again. Indeed, this is how I have come to view industrial grain and bread production, where a ‘lock in’ to minimal genetic diversity, high inputs, export dependency (alongside numerous other fatal flaws) have set us on a pathway to social and ecological disaster. But starting again is never as easy as it sounds, especially in an industry as vast and inertial as industrial grain production.

Nonetheless, this is what the members of the South West Grain Network have begun doing, gathering farmers, bakers, and millers (among others) in south west England to reimagine what a grain system would look like if it was based on ‘human scale, non-commodity [exchange] and grounded in friendship and collaboration’. In doing so they also join a growing movement of UK networks working toward similar goals.

This blog post is about recent steps on this journey, especially efforts to create new forms of knowledge suited to a re-localised grain system built around maximum diversity, collaboration, and a felt connection to both the grains and people that make up the network.

This story begins for me with a visit to Gothelney Farm in Somerset, and an ambitious field trial of around 8,000 wheat varieties. After receiving a ‘bulk order’ from a US gene bank, the trial was started by Col Gordon and Fred Price with the aim of re-introducing diversity back into their regional grain system. The order consisted of 8000 5 gram bags of each variety, with a diverse mix of modern, ‘heritage’, and even ‘ancient’ varieties.

The trials are now in their fourth year and have been a powerfully mobilising activity, drawing in interest and collaborations from across the country. But what really grabbed me was the problem the trials now faced: even with a strict process of eliminating the varieties that didn’t perform well in the field, there is now an unwieldy number of varieties to choose from, and little rationale for which ones to begin bulking up and distributing into local mills and bakeries.

Part of the reason for this is that to get these varieties to usable quantities requires a lot of space. At present there are around 100 varieties which have made it through the four-year process, but each of these needs to be bulked up to field scale, and there simply isn’t the space to do this for all of them. 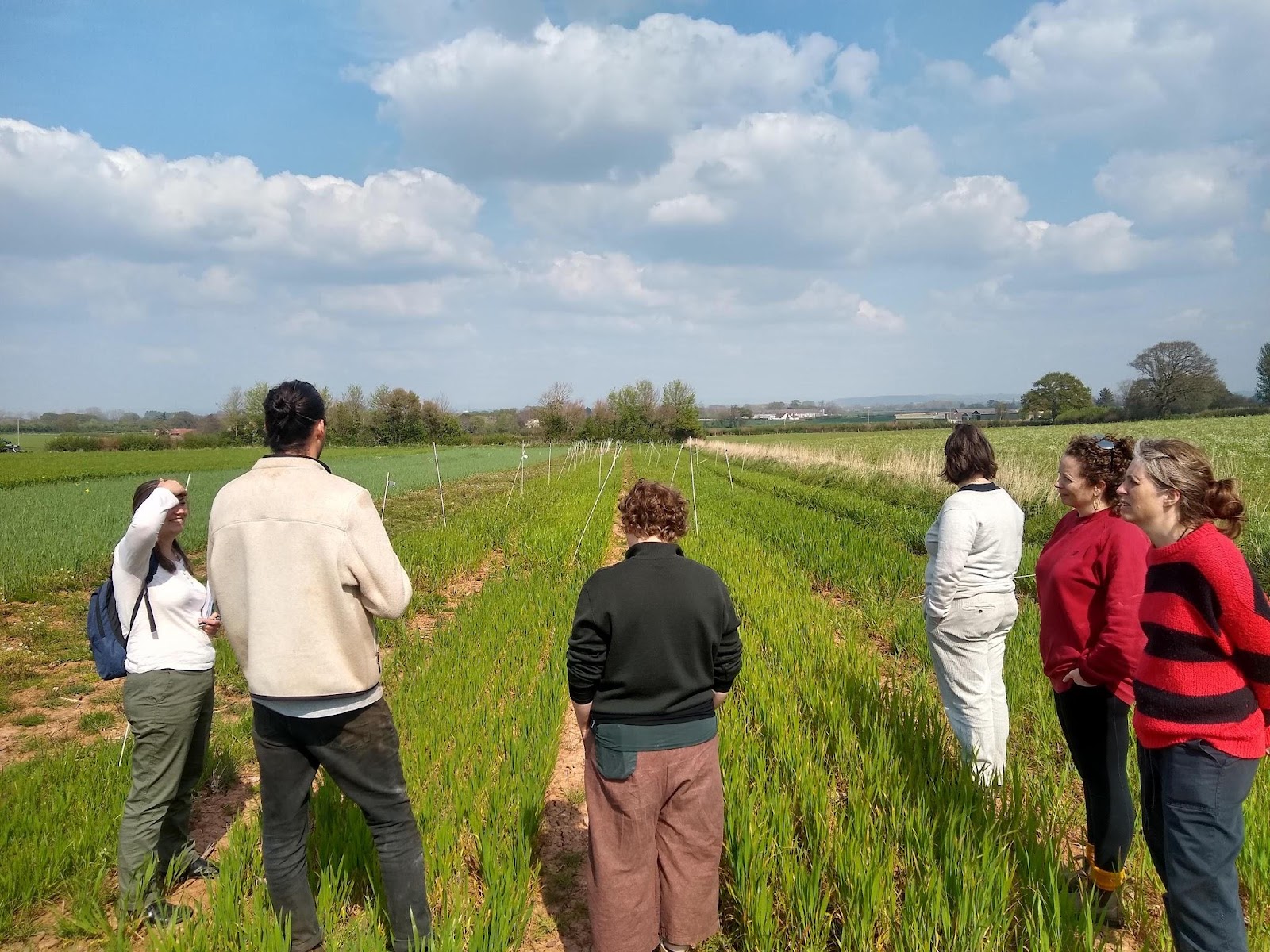 Trial plots at Gothelney Farm: all plots began with 5g samples received from a US seed bank. It takes 4 years to ‘bulk’ the seed up to a 12x1m plot.

Another obstacle is the disconnect between agronomic rationale for varietal selection (i.e. yield, weed competition, vigour, etc.) and milling or baking rationale (i.e. taste, functionality, etc.). As Kimberly Bell of Small Food Bakery and UK Grain Lab put it, we lack a ‘common language’ for assessing novel grains that connect across the farmer-miller-baker nodes in the supply chain.

In October 2021 the SWGN gathered to consider this problem: given the success of the trials, which grains should the network focus on and what criteria should be used for making these selections? This question was mainly aimed at the bakers and millers present; however, despite a lively debate, no consensus emerged for how to proceed.

Should the grains be tested in a lab and detailed analyses made of their nutrient profiles? Or should an analysis be done on their functional characteristics (i.e. how quickly they absorb water or how far they extend when formed into dough)? Or should we find some other less technical, more embodied ways to assess the grains? Or a combination of all the above…?

In January 2022 we applied for a small grant from Research England to begin this process and in ways that would link up with other activities planned in SWGN, but also other funding projects and related initiatives. A key collaborator outside the SWGN has been Kimberley Bell who is also linking in activities with the wider UK networks, especially the UK Grain Lab.

Despite our doubts about industry metrics, our first move was to send off a representative sample of the grains (see table below) to the labs at Shipton Mill to have them analysed. We were also kindly invited for a tour of the mill and its labs and spent a fascinating day being introduced to the various machines which analyse grain as it enters the mill.

These machines ranged from the the NIR machine – an infrared spectrometer able to provide an impressive range of measures (such as protein content, starch damage, and ash content) as a way to ‘screen’ the grain as it comes in – to the much more visually engaging Chopin Alveograph which is used to give an indication of the functional properties of the grain. This is done by blowing a bubble through a thin sheet of dough to assess its tenacity and extensibility. 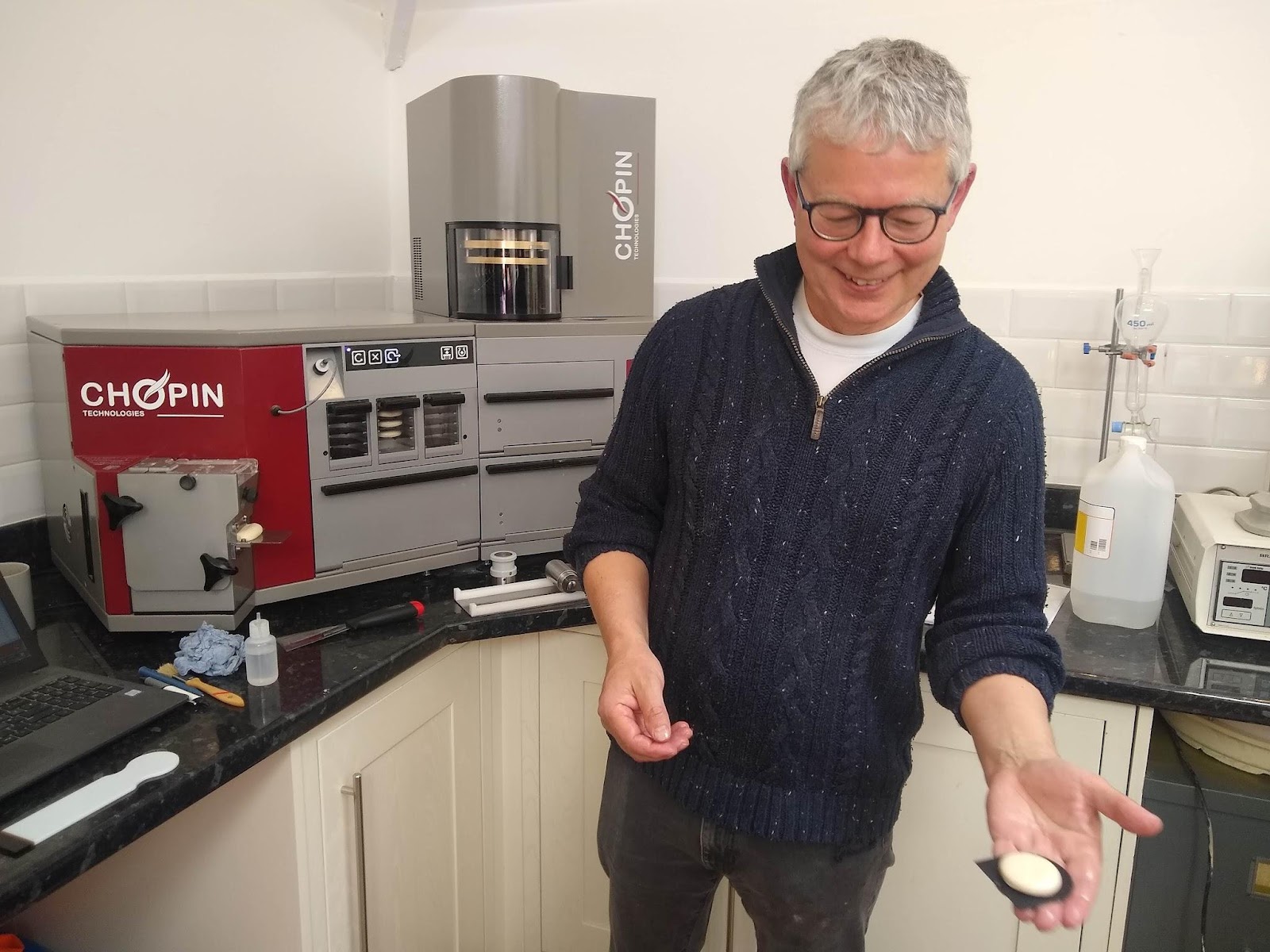 Visit to Shipton Mill: Paul, the lab technician, shows us how to use the Chopin Alveograph machine.

We also discussed the results of the tests of our four wheats before breaking for lunch and tasting for ourselves how they performed at the baking stage. This is where things get really interesting – while the tests suggested the wheats were of low quality, the wheats all performed very well in the bakery.

Though a big part of these results are down to the skill of the baker in question – Rosy Benson of the Field Bakery – it still raised perplexing questions about the meaning of the metrics. In particular here is the measure of protein content, which all wheats scored around 9% – a score normally reserved for animal feed. Perhaps this among all other metrics is the one that bakers pay most attention to, inferring from it the capacity to create a dough that will hold together during the baking process. But the bread itself suggested otherwise. 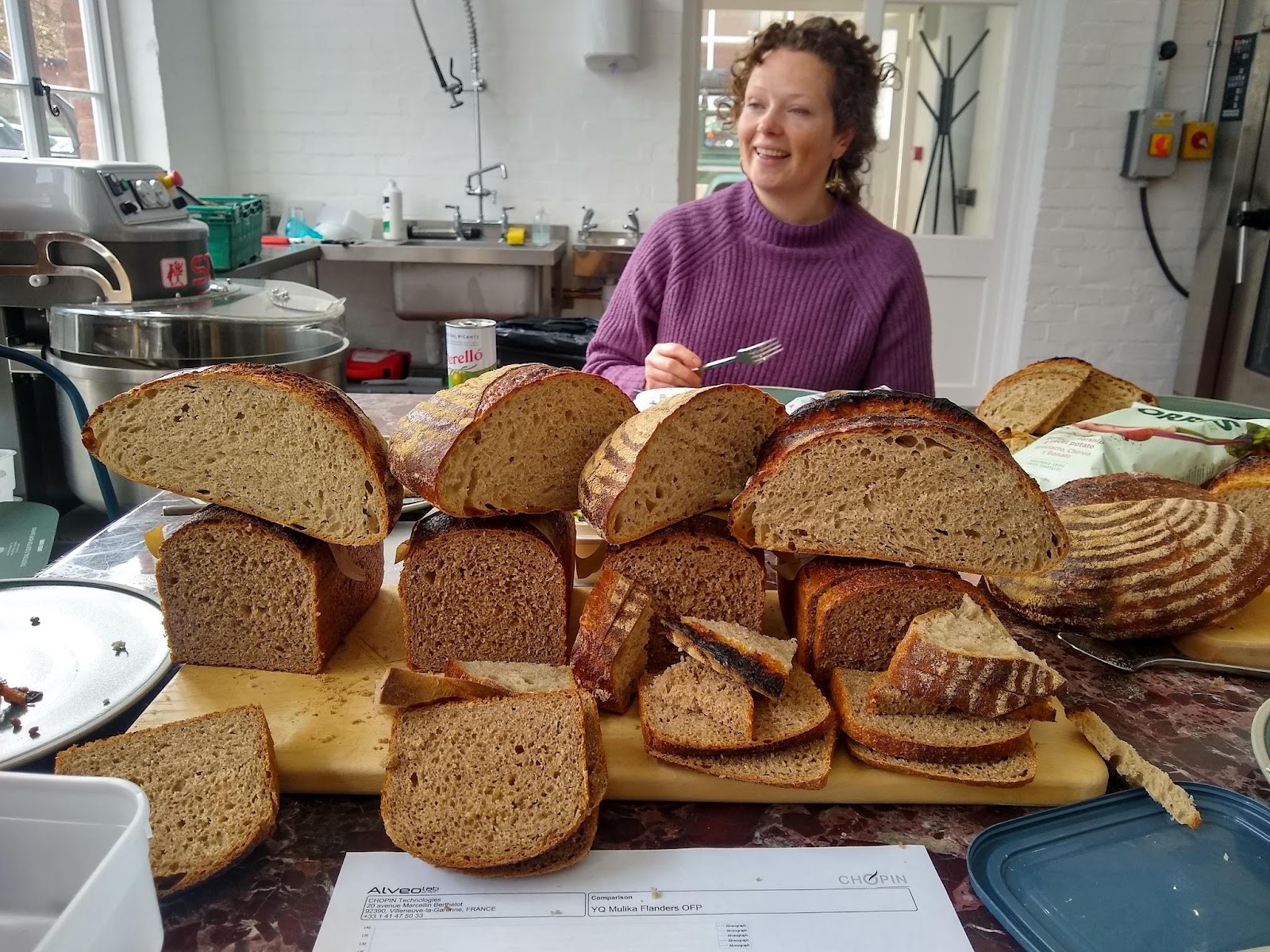 Even the alveograph – arguably a less reductive test than for protein content – returned a more damning picture. Here, all the wheats returned a ‘W value’ of around 120 or lower, suggesting they were all ‘Poor quality flours, unusable for bread making’. If our senses, rather than these machine measures, were to be believed, what did this say about the role of such metrics in reinforcing industry standards? 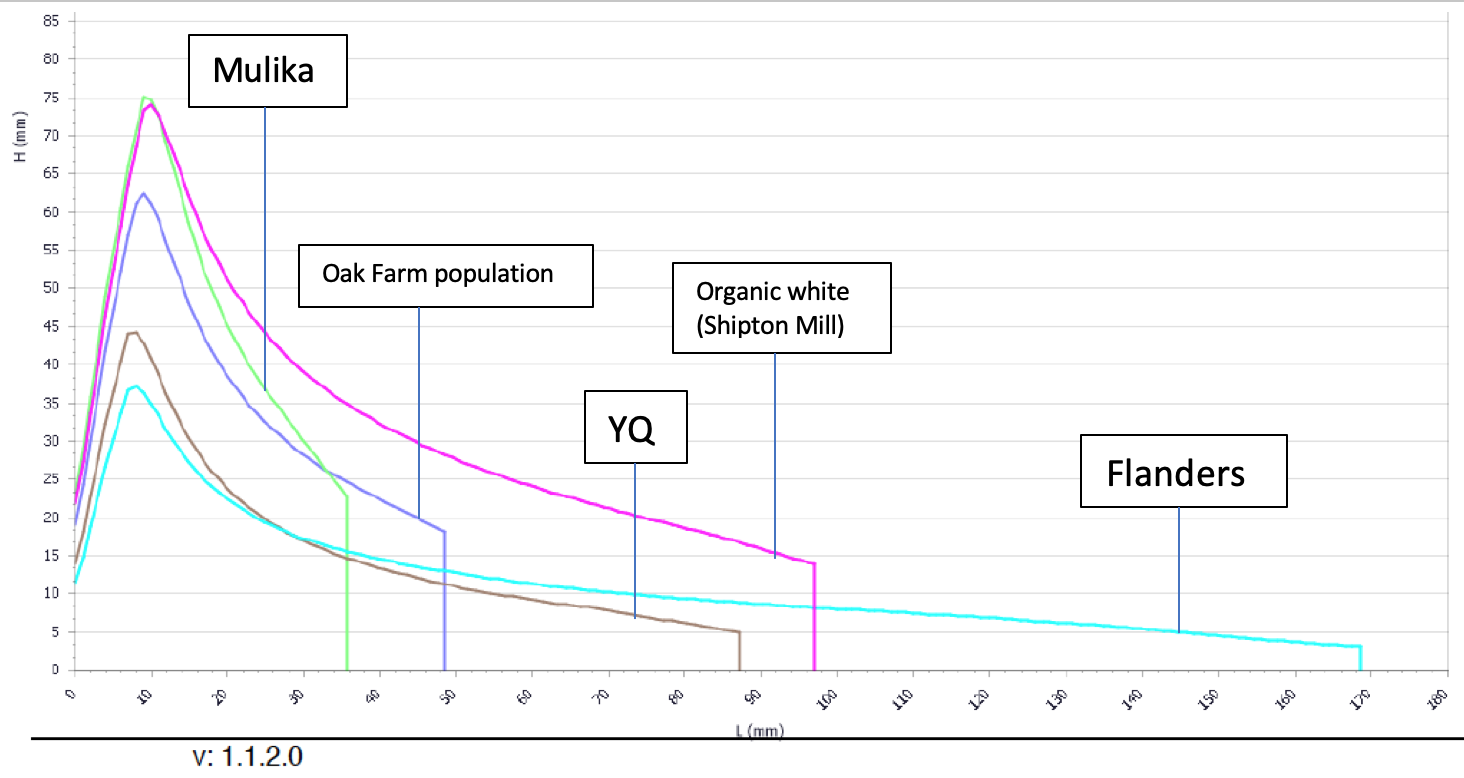 Results from the alveograph. The vertical axis shows the dough’s tenacity or resistance and the horizontal axis shows how far the dough bubble can extend before bursting. The ‘W value’ is calculated by the area under the graph.

Towards an ’embodied’ empiricism

The following week we gathered again to conduct our own experiments. Confused but intrigued by the discrepancies we’d observed between the industry standards and our own taste buds, this next phase was conducted in the spirit of embodied empiricism: What tests were there, we wondered, that could allow us to move away from abstract metrics and invite us to deal with the reality of the flour or wheat in front of us?

These aptly named ‘table-top-tests’ are the equivalent of the DIY soil tests which are now a mainstay of farmer-centred soil monitoring – backed up by sound science, but geared towards activating the attention and felt experience of the observer.

Kim and Rosy performing one of the ‘table top tests’ as part of the Grain Lab: Live workshop

We rolled dough into tubes and tested its elasticity and extensibility; we made a simple pasta to characterise the subtle tastes of our trial wheats; and we learned about other simple tests to identify ‘hard’ and ‘soft’ wheats (in this case using a hammer!), as well as the ‘slump test’ to estimate water absorption capacity – a key indicator in the ability to form ‘strong’ gluten in the dough.

Importantly all of these tests weren’t about looking to predict end use (i.e. bread, biscuits or animal feed?) but focussing the attention on how the different wheats felt in the hands or to the taste. Combined, they brought us back to a conception of artisanal baking that is responsive to the chaotic, unpredictable nature of grains grown in living systems, rather than the uniformity and sterility of industrial supply chains.

Ahead of the much anticipated UK Grain Lab in May, the next steps aren’t entirely clear. That said, it is clear that relying on industry standards and metrics can interfere with the embodied experiences of baking or milling (or even farming) with these novel wheat varieties. Moreover, a vision of a highly diverse and re-localised grain system is clearly in significant tension with an industry that demands high protein and uniformity and that is explicitly geared towards producing visually impressive but nutritionally questionable end products.

In the months that follow we will be reconvening the network to advance our collective thinking on this problem. This may involve future workshops to devise a set of low-tech tests for bakers and millers looking to work with novel and diverse grains. Or possibly the development of a toolkit for assessing wheat and flour in a more embodied way. Or maybe simply further discussion to better align our aims and interests.

In food and agricultural systems, there will always be a place for measurement, but in knowledge-intensive terrain of agroecological grain production and artisanal baking there must also be space for reincorporating what we feel.

Teaser photo credit: Trial plots at Gothelney Farm: all plots began with 5g samples received from a US seed bank. It takes 4 years to ‘bulk’ the seed up to a 12x1m plot. Author supplied.

Weeds: What can they tell us about our soils?