The NGO National Energy Action estimates that 16% of UK homes were already in fuel poverty, and with the price cap rise this will jump to a whopping 24% – almost a quarter of all households unable to adequately heat their homes. That’s 6.5 million households, staggering for a developed country.

The reason for the rise is quite simple: gas is almost four times more expensive than this time last year. The UK is a net importer, and delivery from suppliers such as Norway, Qatar and Russia is significantly more expensive due to a global demand increase over the past year. The gas market is further impacted by European efforts to move away from Russian supplies following the invasion of Ukraine. These issues affect the price of natural gas used for both heating and electricity, since natural gas is also used to generate about a third of Britain’s electricity.

What contributes to the cost of energy?

The price of energy is made up of several different things. The biggest chunk is the wholesale cost of electricity and gas which your supplier will buy through markets from the companies who own the power plants, or from gas importers. Then there are the costs to run the national and local electricity and gas networks, VAT, the cost of technologies such as smart meters, policy costs for things like energy efficiency schemes, and the profits made by energy companies.

As you can see in the figure below from Ofgem, a typical household paying by direct debit will see a bill increase from £1,277 to £1,971. Most of that increase is down to the price of gas, which has doubled the wholesale price of energy in the bill, from around £500-worth of the previous bill, to more than £1,000. 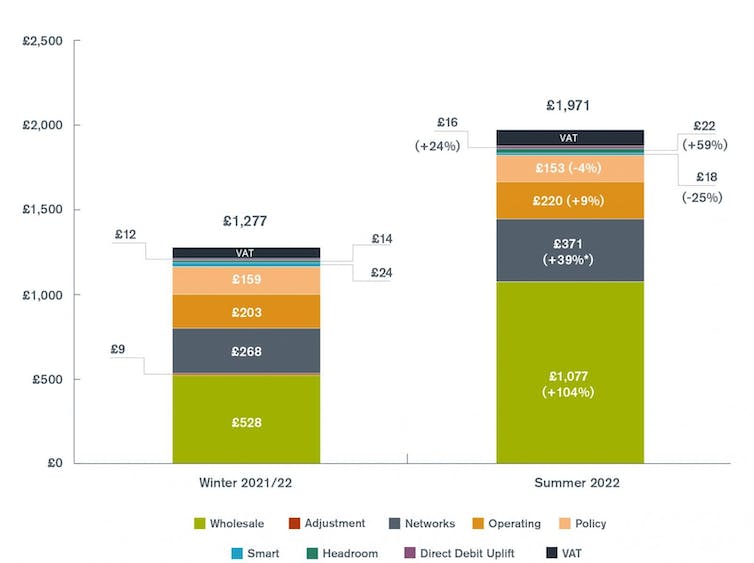 Breakdown of costs in the energy price cap: (based on dual fuel customer paying by direct debit, typical energy use)Ofgem

Networks are the next biggest cost, making up around £371 of the new cap – an increase of 39%. Part of the increase in network cost is because many smaller energy suppliers have gone bust recently, and when a supplier goes bust, other companies are asked to take on their customers. The suppliers who do this are known as the “supplier of last resort”. Because they may have costs which can’t be recovered when they take on new customers, the cost is spread over everyone’s bills.

Operating costs cover the general costs of customer services and billing, as well as a profit margin. Big profits being reported by the likes of Shell and BP are primarily because of the sales of oil and gas they are making in the wholesale market, so this is different to the profits of your energy supplier.

Much has been said on ways to cut the policy costs, which will be slightly lower under the new price cap. This is not only limited in impact on bills, since the policy measures make up just 8% of the price cap, but also shortsighted. These policy measures are to support energy efficiency measures and renewable energy technologies, exactly the stuff desperately needed to reduce reliance on gas (although the policy is paid for from electricity bills). In fact, policy cuts back in 2013 are estimated to now be costing UK energy bill payers £2.5bn.

So what can we do?

One argument is that the UK should produce more gas within its own borders. But this won’t solve the problem, since gas is a global commodity and prices in the UK are determined based on global trades, regardless of where the gas is extracted. UK-produced gas exports to mainland Europe in October 2021 were more than four times that of the previous October simply because it was more profitable.

Clearly, to reduce its exposure to gas prices the UK needs to use less gas, either by using a different fuel for heating, lighting and cooking, or by simply using less energy in the first place.

To use less, the country needs a programme of energy efficiency measures and it needs it urgently. This programme needs to tackle those households most in need first – colleagues and I have shown that energy efficiency improvements enable home owners to afford to heat their homes for longer periods of the day – and we need to work out a fair way to pay for these improvements. Using less energy is a win-win, since it reduces reliance on natural gas, supports the transition to net zero, and reduces energy bills.

Though the government has announced some measures to plaster over the problem, none clearly target those most in need. The divide between rich and poor in the UK is expanding. The price of energy and its associated impact on cost of living is a ticking time bomb which we must tackle, to reduce inequality and raise living standards for all.