On day three of the Russian invasion of Ukraine a worldwide group of scientists from the Intergovernmental Panel on Climate Change (“IPCC”) gathered on Zoom to put the final stamp of approval on the UN body’s latest devastating report on the world’s feeble progress on climate.

A dark gloom hung over the proceedings as war threatened to derail global action on climate for years to come. Then Svitlana Krakovska, a Kyiv-based Ukrainian climatologist leading her country’s delegation to the virtual meeting, breached the IPCC’s longstanding commitment to apolitical discourse with a trenchant observation.

After Krakovska spoke, scientists and climate diplomats from the 195 IPCC nations listened in amazement as Oleg Anisimov, the head of the Russian delegation, apologized “on behalf of all Russians who were not able to prevent this conflict.”

Oil and Gas Fuel the War

Krakovska’s remark about the financing of Putin’s war exposed one of the many ways that the global fossil fuel economy engenders the world’s possible descent into militarist dystopia at the very time that accelerating climate change demands massive and unprecedented peaceful international cooperation.

Russia is, of course, a petrostate, a nation whose economy is heavily dependent on extraction and export of fossil fuels. According to the International Energy Agency, revenues from sales of oil and gas accounted for 45% of the country’s federal budget in January 2022. With an economy smaller in terms of GDP than that of the state of Texas, Russia would be hard-pressed to mount the current war of aggression without its revenues from gas and oil. 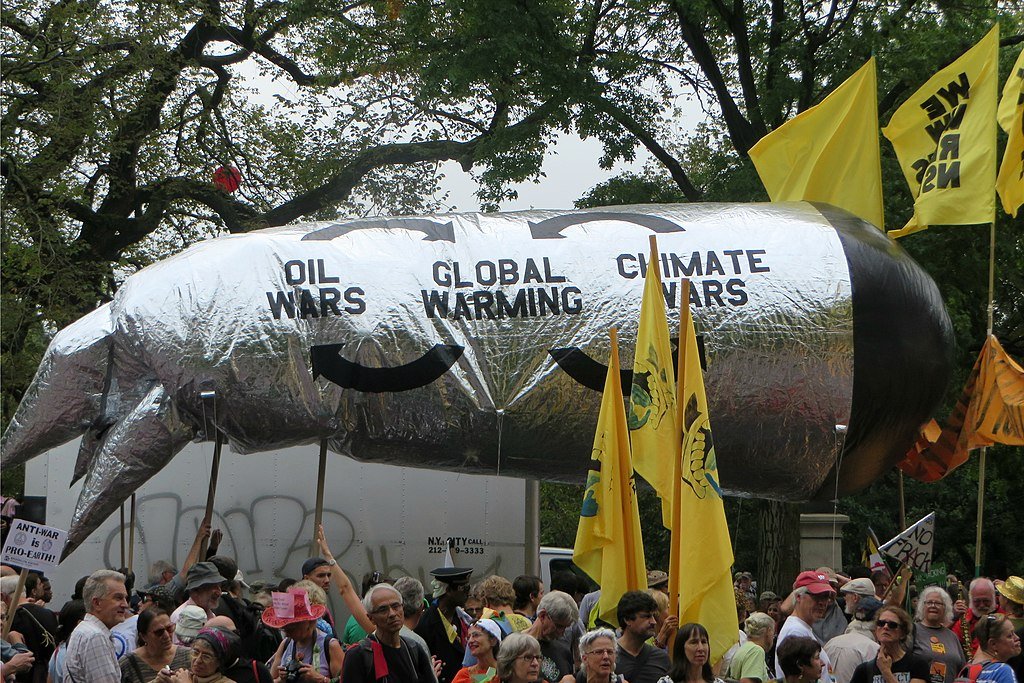 There are no sellers without buyers, however, and in Russia’s case the leading buyers are on the other side of the war. But don’t expect the flow of fuels to change overnight. The European Union is heavily dependent on Russian exports to meet its energy needs. Over 40% of the EU’s natural gas supply is under Moscow’s control. Not surprisingly, there has been a full-on effort over the past year to put natural gas on the European Union’s approved list of “green” investments to meet EU climate pledges, despite official protestations that greenwashing is unacceptable. Although Germany has frozen the approval process for the Nord Stream 2 gas pipeline from Russia under the Baltic Sea to its shores, there is no way Europe can quickly pivot to an alternative supply.

But, in tough news for U.S. climate activists, our domestic fossil fuel industry ready to seize the moment. Expect to see bipartisan congressional support for rapid expansion of fracked-gas extraction. Hard-won “whack-a-mole” victories by anti-fracking campaigners over the last dozen years or so are likely to be reversed as U.S. fossil fuel interests sell their resurgence as a contribution to the Ukraine war effort, “energy independence,” and national security. Domestic enthusiasm for expansion of fossil fuel projects will be whipped up by a combination of emotions generated by videos of refugees fleeing Ukraine and pocketbook arguments inspired by inflation.

See How They Run

Democrats will not stand in the way. Battered by their failure to enact more than a tiny fraction of the Biden administration’s initial agenda and fearful of a Republican wave in the coming midterm elections, the Democratic Party is relieved to have the subject changed from its faltering legislative agenda to war.

War is bad for people, but it is very useful as a distraction, as all too many prior U.S. presidents would attest. In the lengthiest portion of his State of the Union address, Joe Biden basked in the glow of the bipartisan support of his tough talk on Putin, but rendered the fight against climate change a mere footnote.

“He spoke only briefly about climate change,” Scientific American reported, “talking about it roughly as much as diabetes — leaving some Democrats puzzled over Biden’s path forward on what he calls an ‘existential threat.’”

Indeed, we may all puzzle at Biden’s path forward. The Build Back Better legislation is stuck in the mud along with labor law reform and protection of the right to vote. At this point the only climate vision Biden seems capable of articulating with enthusiasm is one based on the fantasy of coupling economic growth with electric cars and charging stations “built in America” and the like.

Biden promised that his climate plan would save the average family $500 to help them cope with inflation, his top priority. Exactly where these savings would come from, he left to the imagination. Weatherstripping, perhaps?

“We can’t let the fossil fuel industry scare us into a domestic drilling free-for-all that is neither economically warranted nor environmentally sound,” Grijalva wrote.  “The U.S. is the world’s top oil and gas producer. Doubling down on fossil fuels is a false solution that only perpetuates the problems that got us here in the first place.” 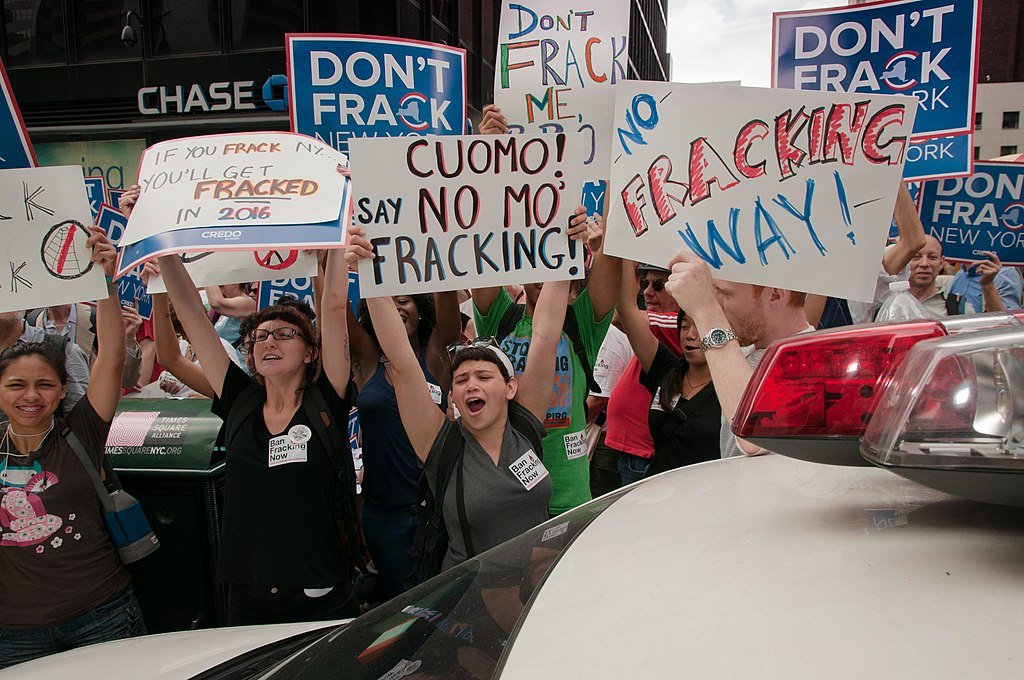 New York City anti-fracking demonstration organized by CREDO Action and New Yorkers Against Fracking in 2012. The demonstration was aimed at New York Governor Andrew Cuomo, who was holding a policy summit in the New York Sheraton across the street. Photo credit: Adam Welz for CREDO Action. CC-BY 2.0

Unfortunately, Arizona’s Grijalva is an outlier among Washington Democrats. Even before the invasion Senate Dems were talking up a form of inverse carbon pricing — a federal gas tax holiday till the end of the year — to provide relief from soaring gas prices and keep domestically produced SUVs and Ford 150s moving off lots. They’re still likely to portray fracked shale gas, methane, as “the key to energy security,” although we’ve known for years that it’s 86 times more potent a greenhouse gas than carbon dioxide on a 20-year timescale. Still, Democrats in swing states like Pennsylvania will balk at placing climate high on their list of priorities. Republicans are, of course, united against any climate action, so the prospects for any legislative progress on climate coming soon are dim.

The Ukraine war provides the perfect cover for official Washington to do nothing about climate this year or the next.

The War Machine Burns On

Meanwhile, an even greater danger lurks: the surging power of the military-industrial complex at home and abroad. A world at war cannot begin to solve the ecological crisis that is undermining the very conditions of human survival. What is required to meet the challenge is no mystery: cutting carbon emissions in half by 2030 . . . for a needed start. A 2018 UN assessment stated that avoiding the threshold of 1.5 degrees Celsius of temperature rise would require “rapid, far-reaching and unprecedented changes in all aspect of society.” But that was four years ago, and nothing of the sort is being seriously contemplated by major industrial powers.

Instead, palaver about “net zero by 2050” has become the latest Orwellian dodge to provide cover for the industrialized countries’ failure to cut carbon emissions rapidly this year and next. Nationally Determined Contributions — voluntary and unenforceable mitigation and adaptation plans devised by individual countries to comply with the 2015 Paris Agreement — fall far short of what is urgently needed.

Many parts of the world are still being written off as “sacrifice zones.” Rather than provide vulnerable nations with the resources needed to respond to “loss and damage” caused by climate change, the recent 26th annual UN conference on climate hatched a banker-friendly Glasgow Climate Pact that remains full of loopholes and inadequate on aid.

Under the best of circumstances, building the movement in the United States to fix the broken U.N. process would be an epochal challenge. Putin’s invasion requires the climate movement to put fighting the war machine near the top of its agenda.

Already, our military-industrial complex is licking its chops at the prospects of renewed public enthusiasm for bloated military budgets. A few months ago, military contractors like Lockheed Martin and Raytheon were lamenting the loss of their Afghan war cash cow. Stocks of U.S. weapons manufacturers, recipients of roughly half of the U.S. defense budget, rose swiftly and sharply in response to the invasion of Ukraine. 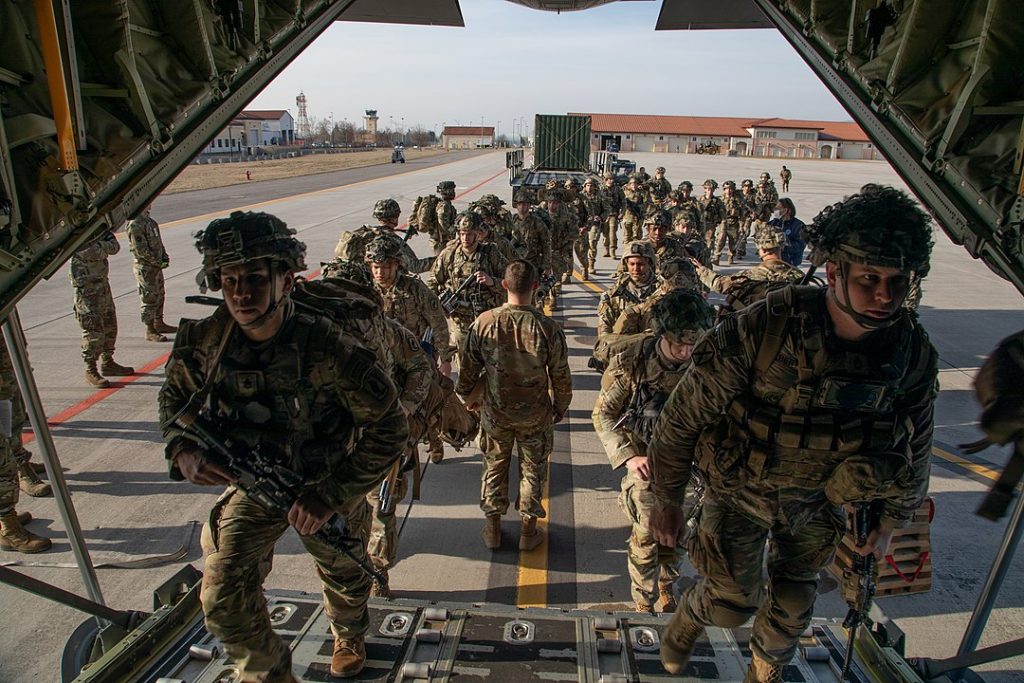 The stock market’s reaction may reflect more than a temporary bump in their financial fortunes. Wall Street may be anticipating bigger things to come for the arms industry, a New Cold War that will entrench its grip on the U.S. policy agenda throughout the decade.

Michael Klare, a scholar deeply versed in national security strategy and oil politics, has theorized that the United States is retooling its military away from the relatively low-intensity global war on terror to prepare for higher-tech, higher-intensity war with military powers like Russia or China. If this proves true, military spending, already dominating the federal budget, will crowd out any hope of the Just Transition to renewal energy. As the annual budget negotiations are about to begin, Senate Republican leader Mitch McConnell has called on Biden to include a 5% increase in defense spending on top of inflation (7%) to respond to “growing threats posed by Russian and China.” If Biden and the Democrats go along, this year’s $768 billion dollar budget could blow past $850 billion for fiscal 2023.

Arms expenditures are booming worldwide. Even before the hot war in Ukraine began, China had announced plans to raise its defense spending by 7.1% this year. The Ukraine war is bringing Europe fully on board. Germany is abandoning its longstanding policy not to send weapons into conflict zones and upping its military budget substantially. European countries are pledging to meet the percentage-of-GDP commitments about which President Trump raised a ruckus several years ago. About 20 countries, mostly in NATO, are flooding weapons into Ukraine — rocket launchers, Javelin antitank missiles, Stinger surface-to-air missiles, machine guns, sniper rifles. Furthermore, with billions of dollars’ worth of weapons being sent into a country that already hosted an illicit weapons trafficking network and is now at war, diversion of weapons great and small to unintended recipients is ever more likely.

With so many governments upping their commitments to war, it becomes clearer than ever that the world must now choose between making war and saving our planet. As fossil fuel money has financed Putin’s war on Ukraine, so Europeans are talking about the need to cut their dependence on Russian oil and gas. But the real solution is clearly for Europeans (and the rest of the world) to eliminate their dependence on fossil fuels entirely. As long as we are tinkering with where extraction takes place, who buys from whom, and who controls the supply routes, we continue playing whack-a-mole. Fossil fuels will drag us deeper into conflict, farther from cooperation, and closer to extinction.

The climate justice and allied popular movements have the only realistic alternatives on offer. Sun, wind, and water power can meet the vast majority of our energy needs. Regenerative agriculture can provide enough food to feed everyone. A good life is possible in the Global North without imperialism and exploitation of the Global South. Social justice and real democracy can lead us to a world of freedom for the many, not just for the few.

The Green New Deal Goes Viral: What’s Next Is Up to Us