Transition Wilmslow in Cheshire was one of 87 Transition groups to receive a seed funding grant from the Transition Bounce Forward project in 2020. Rob Hopkins caught up with Althea, Garry, Andrew and Pippa from the group to find out how their new community garden – and their dream for a network of market gardens – was growing…

The seeds of Transition Wilmslow were sown in 2010 when Pippa Tyrrell was driving back home from Scotland and stopped at a service station where she picked up an unlikely copy of The Transition Handbook. Having returned home and read it, she spotted a sign in a shop window asking if anyone wanted to start a Transition group in Wilmslow. And thereby Transition Wilmslow was born.

We’re meeting to discuss the group’s latest project, their community garden at Oakenclough, the project which has been supported by Transition Bounce Forward seed funding. It’s not their first garden. That was ‘The Temp’, a community garden in the corner of a local park, founded on the idea of being an educational resource designed to inspire families that growing food was possible and enjoyable. 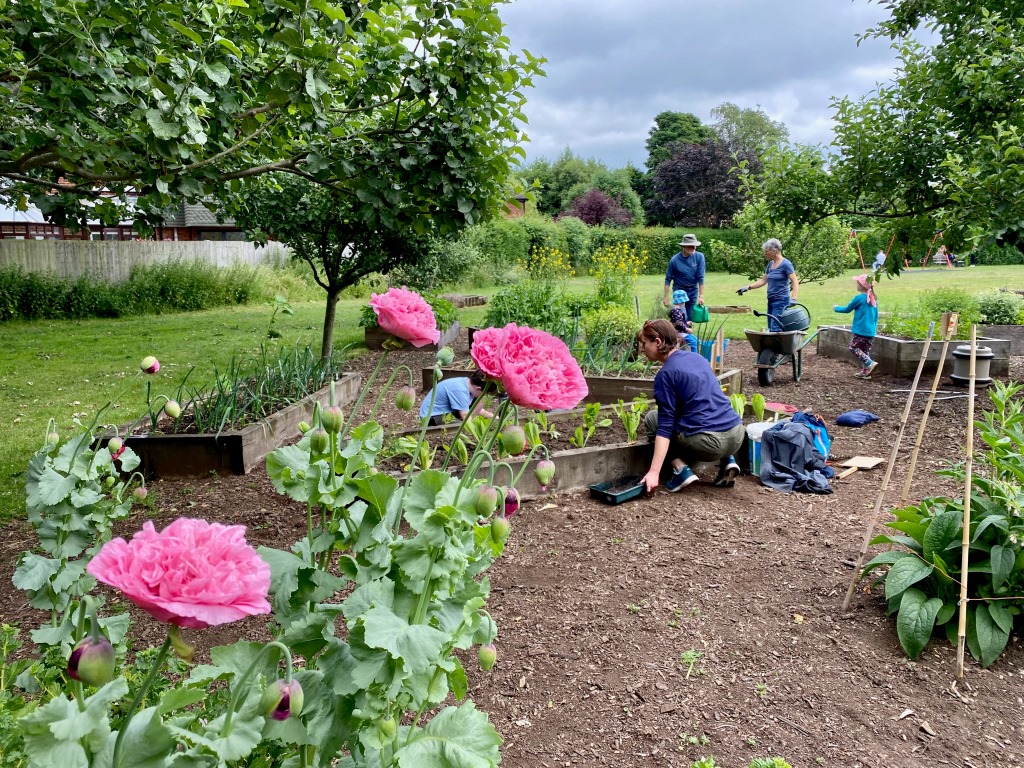 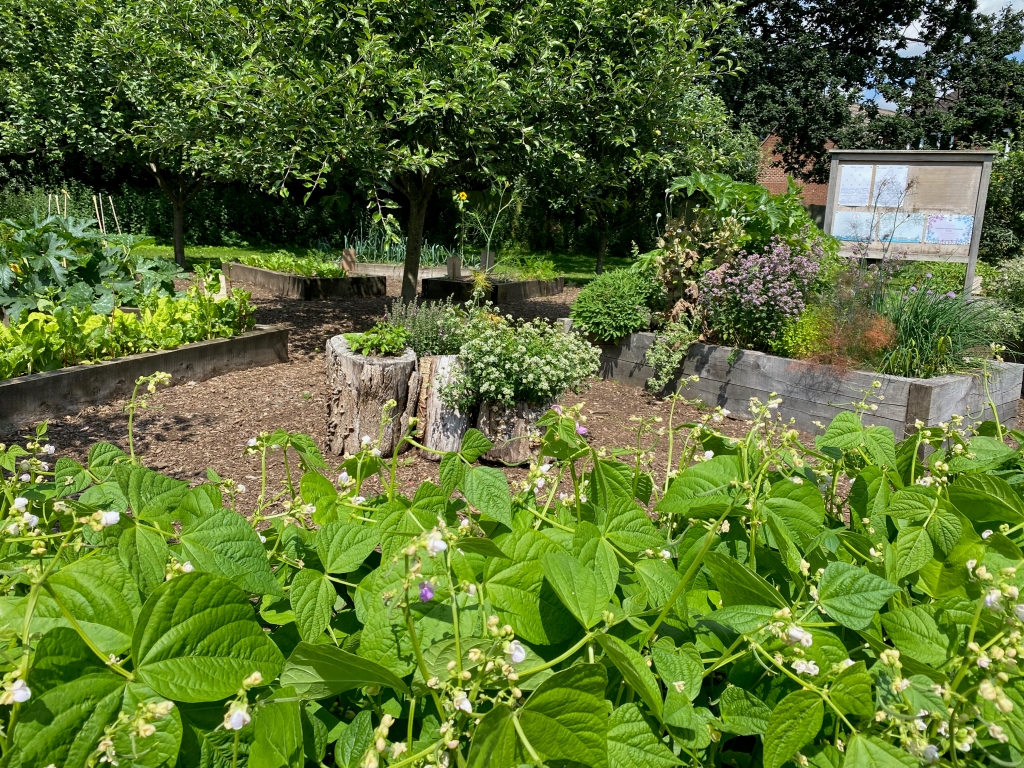 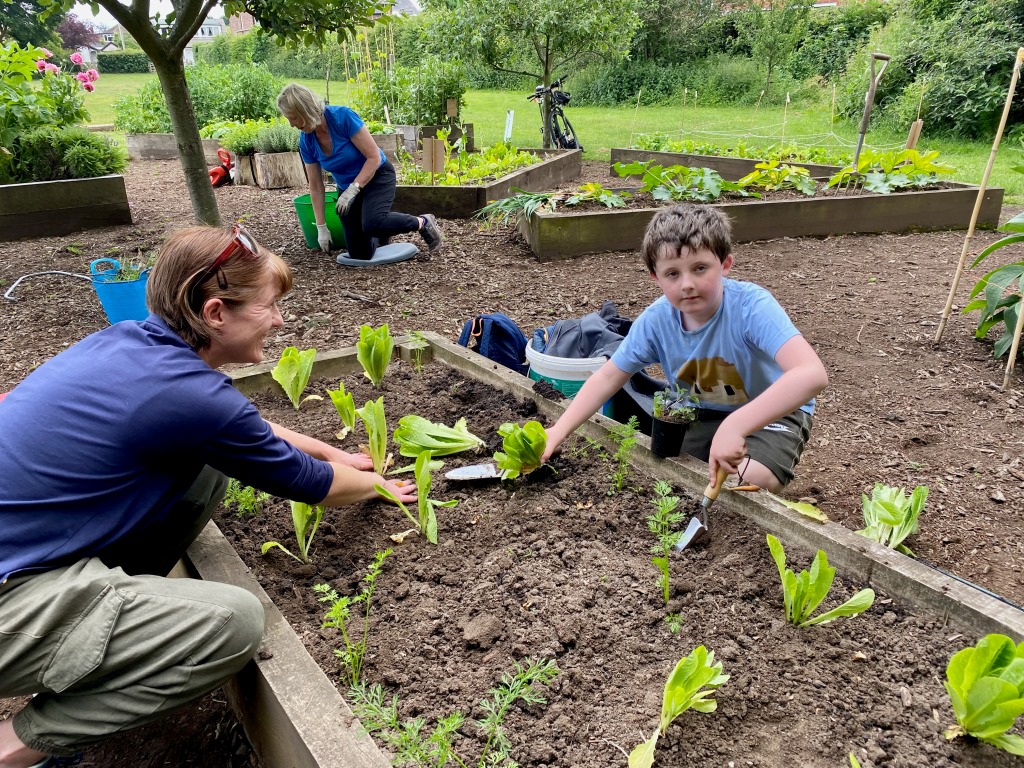 It’s a garden I visited a few years ago when Transition Wilmslow won me as a prize in a competition (not something that has happened before or since), and I had the joy of being shown around their various projects. The Temp works with all kinds of different community groups, including many young people. One of their favourite activities is getting the kids to plant rows of potatoes in the Spring, and then getting them back a few months later to harvest them, cook them and eat them. “We couldn’t see any better learning experience than that”, Garry tells me. There is another site too which is under development, 12 overgrown allotments which have been cleared and are being turned into a food forest.

In late 2019, an inspirational talk by a local young XR activist followed rapidly by the arrival of COVID and the widespread concerns about food security that it brought, spurred the group into thinking that their food growing work needed to scale up significantly. Members of the group went out, scouring the town for potential growing sites, and that’s when the site at Oakenclough was found.

It’s the site of a former Primary School which is now a Children’s Centre. It sits in the middle of a housing estate with high levels of social deprivation, on land owned by Wilmslow Town Council, who have been very encouraging of the project.  The Children’s Centre manager was very happy with the idea of hosting a community garden, of being home to a project that would teach kids to grow and to cook. Already the garden is getting many different people involved. The idea is to work with people from the local Job Club, and to create a café that cooks and serves the food grown in the garden. It also, for the garden group, has the advantage that the whole site can be locked, raising the possibility of a shed and a polytunnel, impossible on the more exposed Temp site. 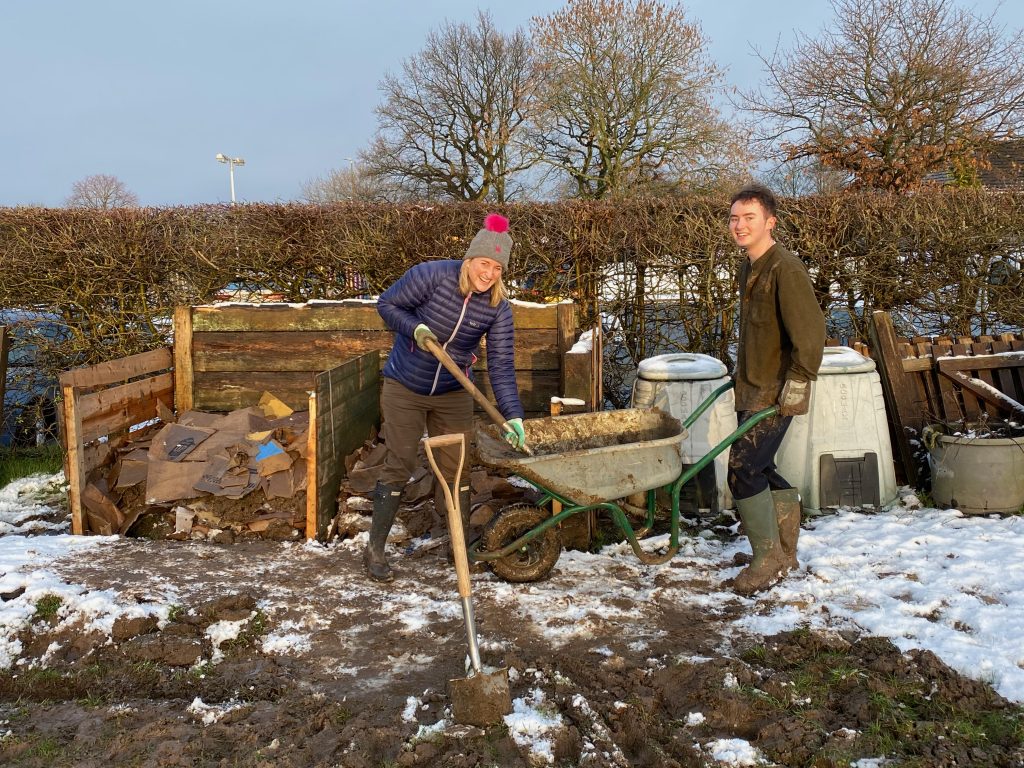 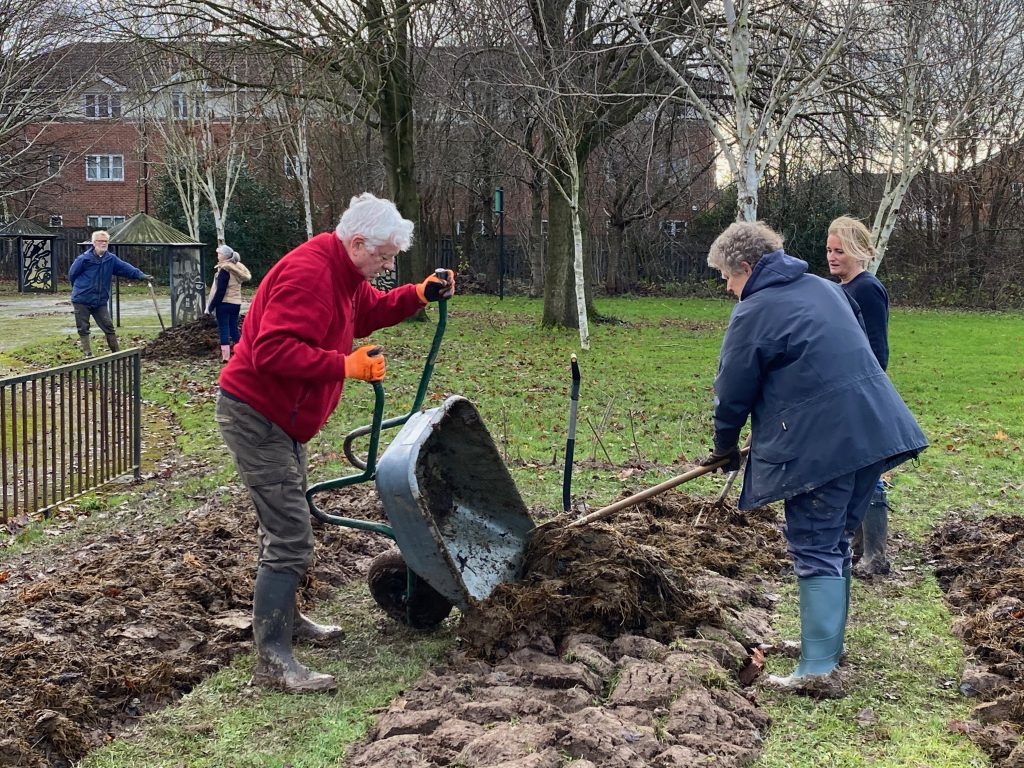 Work on the Oakenclough Community Garden began on November 8 2020. By December 21, all the  beds had been dug (“I’ve got very good at digging French drains” Andrew tells me) and on that day a big community effort spread manure onto all the beds. 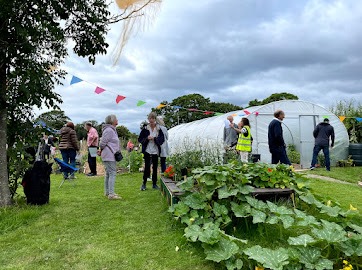 Locals invited to see the garden and new Polytunnel

So, what has the group created on the site after 10 months of work on their three-quarters of an acre? A roster of 80 volunteers have created a garden home to a huge variety of plants. They have planted 20 fruit trees and a number of soft fruit beds. They’ve created 170 metres of one-metre wide beds, six square metres of raised beds, a compost heap, a pond, and now, thanks to Transition Bounce Forward Seed Funding, a 10m by 15m polytunnel. Already the group has been supplying a food bank with freshly locally-grown produce and has helped to set up a community café for families using the children’s centre, volunteers and others. The polytunnel supplies the café with fresh salad leaves through the winter, and as well as veg for soups.

It wasn’t the only TN Seed Funding the group got. A smaller grant had already enabled one member to create a scheme that distributed free packets of seeds, coir compost pots and compost to local people, as well as to Guides and Scouts groups, primary schools and so on, which got a lot of people growing and planting.

It’s important to note that there is more to Transition Wilmslow than their gardening work. In the past they’ve done work supporting people to get home insulation with the support of ‘Green Doctors’ who give people advice on how to green their homes. Their transport group does a lot of work promoting bike lanes. They do a lot to respond to planning applications that relate to Lindow Moss, a local very precious peat bog at huge risk from extraction and encroaching development.

They also are busy seeking out possible sites around the town where trees could be planted and then working with the Council to get trees into verges, public parks, and anywhere else they might fit. In late October/early November, they put on a ‘Festival of Nature’,  to inform and inspire local people about COP26. (Check out the talks here). They intentionally set out to deliver it by working alongside a wide range of other local groups. They run regular repair cafes, Plastic Free Wilmslow, and much more besides. 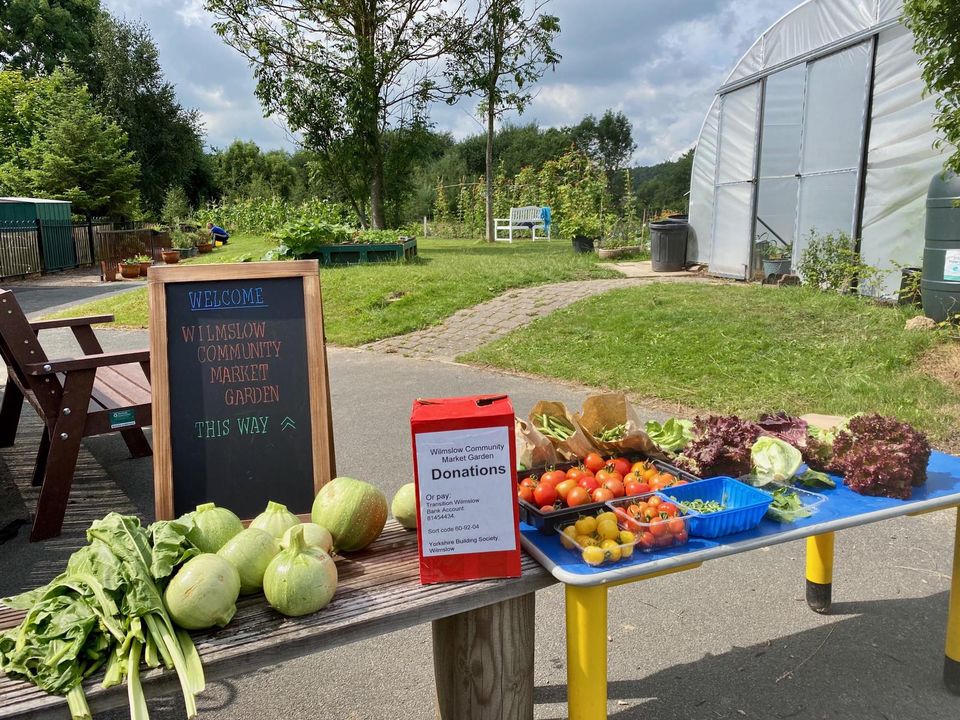 Having experienced what the seed funding made possible for them, I wanted to know what their advice would be for other Transition groups thinking about applying. “It was a simple process”, Althea from the group told me.

“It was a lot easier than many other application processes. While it unlocked the ability to buy the seeds, get tools and equipment and buy the polytunnel, it also allowed us to unlock a lot of community involvement which has been vital, enabling us to reach out and harness expertise and enthusiasm”.

With real momentum clearly underway with the community garden at Oakenclough, how has seeing this project taking shape informed the group’s sense of what might be possible in the future? What are they dreaming for where all this might go? The group plans to become a Charitable Incorporated Organisation enabling them to access more funds and also to employ people. They hope to add a second polytunnel at Oakenclough, while they keep searching for a larger site, ideally 2-3 acres on the edge of town which would allow them to create a commercial market garden, employ one or two people to run it, perhaps have a shop, and/or a veg box scheme.

Their ultimate aim? A network of market gardens all round the town, but that‘s a little way off yet!  Underpinning it all is the recognition that there is a need to start addressing supply chain issues, and to get people used to eating fresh, seasonal local food, not relying on thousands of air miles to deliver their food to them. The group keeps looking for sites, so watch this space!