The energy crisis is biting hard. Average gas and electricity bills in the UK will rise by 54% on April 1 2022 when the regulator Ofgem lifts its price cap. This is an increase of roughly £700 a year (US$950). According to the charity National Energy Action another two million UK households could be plunged into fuel poverty by then, bringing the total to six million by the end of the year. Shockingly, that would mean more than a fifth of homes having to choose between heating or eating.

The rise in wholesale fossil fuel prices accounts for almost £500 of the rise in household bills, with the remainder due to bill payers covering the cost of failed energy suppliers. UK households are uniquely susceptible to these spikes because they inhabit some of the least energy efficient houses in western Europe.

An obvious way to offset the impact of wholesale energy price rises is to improve the efficiency of housing stock, to deliver the same comfort using less energy. But a nationwide efficiency drive does not appear to be at the top of the UK government’s list of proposed solutions to tackle the energy crisis.

Instead, Chancellor Rishi Sunak has announced a raft of measures to offset price rises through one-off grants, council tax rebates and repayable discounts on bills. These measures may lessen the immediate financial pain, but they do not tackle the underlying causes. They represent a sticking plaster, not a long-term solution.

A decade of failure on energy efficiency

In one form or another, obligations on energy companies to increase domestic energy efficiency – especially in fuel poor homes – have been around since 1994. Suppliers recoup the cost of installing wall and loft cavity insulation and other home efficiency measures via a green levy on customers’ energy bills. Today, the UK’s flagship energy efficiency programme, the Energy Company Obligation (ECO), costs the average bill payer just £29 a year.

But the ECO has performed poorly compared to predecessor policies. When it was launched in 2013, loft and cavity wall insulation rates collapsed by 92% and 74% respectively compared with 2012. The ECO delivered on average just 228,000 insulation measures a year between 2013 and 2021 – a drop of 83% against the 1.3 million insulation measures achieved by the policy it replaced. 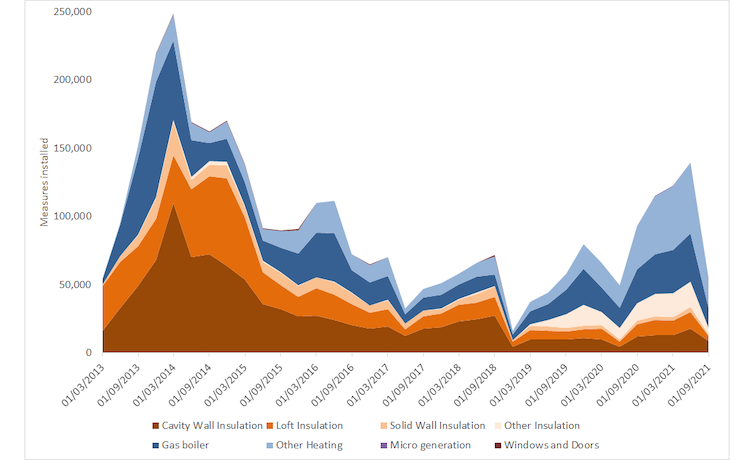 The installation of ECO measures has not returned to its 2013 peak. BEIS.

The ECO has also done little to wean households off expensive gas heating. Since 2018, the ECO funded the installation of 230,000 new gas boilers, with 94,000 of these installed without other efficiency measures like insulation. Meanwhile, it has delivered just 545 electric heat pumps since October 2018 – roughly 14 installations a month.

In 2013, the Conservatives moved to “cut the green crap” from energy payments, gutting the ECO and raising rather than reducing household bills. A recent analysis by Carbon Brief suggested that cuts to the ECO will have added £808 million onto total household energy bills by summer 2022 due to 1.1 million fewer insulation installations per year. Since 2013, it’s estimated an additional nine million homes could have been insulated, saving homes a combined total of £830 on gas bills alone by 2022.

With the energy crisis making its own case for radical reform and the government yet to finalise its plans for the future of the ECO, we offer four recommendations for solving the energy crisis.

Since October 2018, the ECO has delivered 120,000 insulation measures per year. At this rate – under the ECO alone – it would take 50 years to implement just one insulation measure across a possible six million fuel-poor homes. At an absolute minimum, the government should be aiming to install insulation in 1.3 million homes a year – a rate it managed pre-2013.

Sunak confirmed the ECO’s funding will grow from £640 million to £1 billion from 2022 to retrofit 305,000 homes a year, but this isn’t nearly enough. Recent research by the New Economics Foundation suggests net zero targets require increasing annual funding for insulation to around £7 billion, which would retrofit 7 million homes by 2025.

Funding the ECO through levies on energy bills means the poorest homes currently pay the same 15% share of their energy bill towards green policies as the richest households. The bulk of the ECO – and indeed, all green levies – is raised on electricity as opposed to gas bills. This artificially inflates the cost of electricity and the running costs of electric heat pumps compared with gas boilers, disincentivising the switch to low-carbon heating.

The answer is to shift funding for the ECO and other green policies onto general taxation. This would offer a small reduction on bills prior to April’s price cap rise, with the lowest earners paying proportionally less. In the longer term, it would mean wealthier homes subsidising efficiency improvements in low-income households, alleviating fuel poverty and relieving some pressure on the NHS, as warmer homes mean fewer health issues and lower healthcare costs.

Insulating hundreds of homes at a time, neighbourhood-by-neighbourhood and coordinated by local authorities, could help to retrofit housing deeper and faster than tackling homes one-by-one. Fortunately, the government’s proposals for a revamped ECO envisage energy companies meeting half their obligation via measures referred to by local authorities. Here, the local authority works closely with businesses and community groups to ensure measures reach those most in need, relying on their combined knowledge of and access to the community.

The ECO has a long history of installing new gas heating, perpetuating the problem of households being exposed to volatile gas prices and doing little to deliver on the government’s net zero target. This includes the goal of installing 600,000 heat pumps by 2028 – which the government is not on track to deliver.

Policies like the Boiler Upgrade Scheme exist to help households adopt low-carbon heating technologies, such as heat pumps, but these do not have the same level of funding or focus on fuel-poor homes as the ECO. The government must enact its own proposals and ensure the next phase of the ECO makes provisions for installing low-carbon heating and limits or removes support for new and replacement fossil fuel heating systems. Failure to do this only makes another energy crisis inevitable, fuelled by runaway fossil fuel prices.

The UK government has already missed the opportunity to insulate millions of additional homes and prevent an eye-watering price cap rise in April. It can avoid repeating the same mistake by making home energy efficiency its number one priority.