When a leading research institution hosts a debate with an infamous climate denialist, gathering his fans, selling his books, and adding to his resume, we all lose.

On November 27, 2021, the Centre for Development and the Environment (SUM), at the University of Oslo, hosted a book debate with the Norwegian Business School (BI) as part of the Arne Næss seminar series. The speaker list included Bjørn H. Samset, climate researcher at Cicero and IPCC co-author, and Atle Midttun, professor in innovation and industrial organisation at BI. The disputed climate sceptic Bjørn Lomborg was also invited to promote his new book ‘False Alarm’.

While debate and controversial ideas are important and can be stimulating, we argue that offering Lomborg an academic platform contributes to the empowerment of climate denialism and the celebration of misleading facts and pseudo-science. Lomborg and his peers have had tremendous access to academic stages across the world to spread their seeds of doubt about climate action under the auspices of debate. This article thus examines how academic departments rooted in deep ecology and environmental sustainability end up promoting anti-environmentalism and far-right politics. Lomborg’s usage of ‘scepticism’ serves to push the bar for what is acceptable to say about the planetary predicament and effectively aspires to conceal outright climate denialism.

Bjørn Lomborg is known as a Danish “climate sceptic”, author, and president of the think tank Copenhagen Consensus Centre. Lomborg’s claims span from outright climate denialism – stating in 1994 that “the greenhouse effect is extremely doubtful”—to his contemporary stance as a so-called ‘sceptical environmentalist’. The usage of the term ‘climate sceptic’ serves as a shield against more grave accusations of climate denialism: Once we name the spade for what it is, they shovel it away as misunderstandings. Hence, such terms serve to move the goalpost – they can be climate sceptics all they want, slowly approaching outright denialism while avoiding that same label.

Lomborg claims that climate catastrophe is overestimated and promotes the redistribution of climate financing to so-called ‘more effective’ outlets, such as carbon capture and mitigation technology, effectively supporting the do-nothing and ‘technology-will-save-us’ approach of mainstream liberal climate governance, while repeatedly and systematically sowing doubt on the very existence of the climate crisis. Lomborg has created a lucrative career by tapping into a populist zeitgeist of climate scepticism and by providing political ammunition for the far-right wing to reinforce fossil fuel companies, who also count as some of the main donors for his activities.

Lomborg has, for almost 20 years, been repeatedly debunked, accused of bad academic conduct, derailing climate efforts and cherry–picking data. In 2003, a formal complaint was filed by The Danish Committees on Scientific Dishonesty accusing Lomborg of “fabricating data, selectively and surreptitiously discarding unwanted results, of the deliberately statistical methods, consciously distorted interpretation of the conclusions, plagiarisation of others’ results or publications, and deliberate misrepresentation of others’ results” in his 2001 book The Sceptical Environmentalist. Initially, Lomborg was declared guilty, but was later acquitted, due to his lack of scientific expertise on the themes discussed in his book. Escaping accusations for misconduct on the basis of a ‘lack of expertise’ must be the perfect irony for this ‘scepticism’-farce. Still, the Committees maintained Lomborg was “clearly violating the standards of good scientific practice”. 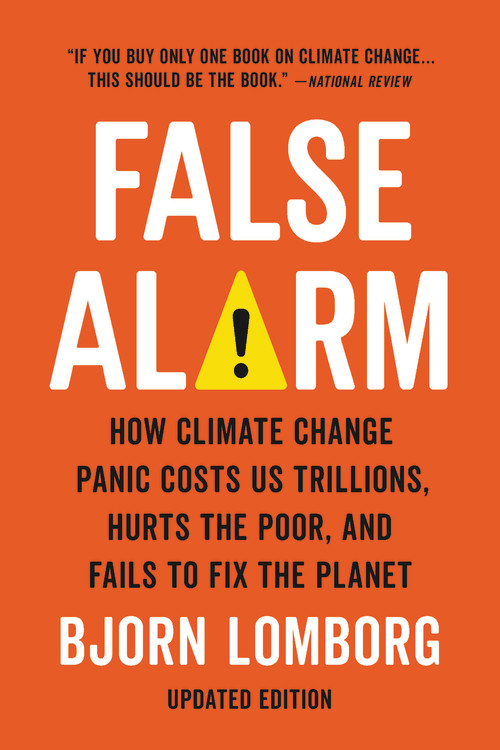 Lomborg’s latest book claims scientists are “vastly exxagerating” the problems of climate change. The cover reviews are from right-wing newsite National Review, and from climate denialist Matt Ridley, advisor to the right-wing Global Warming Policy Foundation. He has presented the book in various other right-wing institutes including Competitive Enterprise, Heartland, Pacific Research and Hoover. Source: Web.

Examples of Lomborg’s misdeeds have been popularised by the American far-right and others who seek to back their otherwise-unsupported views on the climate crisis. Recently, the authors of a study cited by Lomborg spoke out publicly, deeming that he “took the results out of context and used them for a purpose that we explicitly said they were not to be used, and which he was reminded of when he asked for the underlying data”.

In 2016, two different researchers –Antonio Gasparrini  and Stephan Lewandowsky— separately accused Lomborg of providing misleading interpretations of their results, with “selective reporting, half-truths and errors of omission” on their research concerning sea-level rises and heat wave deaths. The list goes on and on, and as Lomborg’s prolific writing and bibliography grows, so does the pile of evidence that he is consciously mass distributing denialist propaganda, sowing seeds of doubt in the climate change debate.

Nevertheless, he remains a frequent ‘expert’ voice in international media outlets from Fox News to the BBC, as well as in reputed universities. His steady appearances on far-right shows and platforms like the Ben Shapiro Show and Breitbart have confirmed that reactionaries benefit from his work, using it to sustain their illusions of climate catastrophe as a non-issue. Equipped with an arsenal of cherry-picked datapoints and a silver tongue, Lomborg excels in his careful dance between outright denialism and neoliberal ecomodernism. In fact, he has repeatedly weaponised this ambiguity in debates, as an instance of enraged ‘leftists and climate alarmists’ calling him something he is not, making it easy for him to act a martyr and show his adversaries as unable to engage with nuances.

The politics of platforming climate denialism in universities

The platforming of far-right speakers has often been a subject of discussion, as many fear that giving racist and discriminatory views space to breathe leads to their propagation. Debates regarding platforming are often seen as disagreements between those who value enlightenment values of free speech and intellectual autonomy on one side, and those inclined towards paternalism on the other. Professor Neil Levy argues that there are instances where one can dispute the platforming of debaters based on respect for people’s intellect rather than mere paternalistic concerns. We stress caution for deplatforming, this is a sensitive matter, and of course would demand a high threshold to accuse someone of spreading misinformation or outright lies. If two people of similar expertise and credibility have a disagreement, open debates rather than deplatforming should be the norm.  At academic institutions, one would assume that there would be debates with, if not ‘experts’, then at least credible representatives of their field. But clearly, Lomborg cannot be considered as either of these.

The respect we hold for knowledge-producing institutions, such as SUM, gives everyone associated with them a degree of legitimacy. If the BBC holds a debate, we expect the participants to be credible and honest representatives of their respective views. Moreover, there is no question that, for us, debate and intense conversations are at the heart of healthy public and academic discourse – in fact we would like to see more open, accessible, conversations around topics related to the causes, consequences, and potential solutions to ecological and climate catastrophe. However, this push for a ‘balanced debate’ can –as this case demonstrates– lead to the platforming of climate sceptics with questionable track records.

Universities in particular are institutions that hold a responsibility to society in advancing the pursuit of knowledge for its wellbeing. Thus, this is about more than Lomborg’s expertise or lack thereof, it is about our common responsibility towards the biosphere and human/non-human well-being. Platforming individuals like Lomborg, whose views are so openly supportive of and financed by extractive industries destroying our planet and people, without any meaningful opposition whatsoever, is a direct violation of that responsibility. Lomborg does not debate to advance knowledge and the betterment of society, but rather to sow doubt and grow his reader base while advancing the interests of these industries and his own pockets.

And while it saddened us to see Lomborg being given a stage in Oslo, we were even more distraught to see he had also given talks at Duke and Harvard, and even signed contracts with the University of Western Australia wherein the Federal Government of Australia pledged 4 million USD to Lomborg’s CCC.

How to co-sponsor climate denialism at academic institutions

Concerned about the integrity of our department and its potential misapprehension of Lomborg, we met with the organiser of the event, a senior figure at SUM, to inquire about their intent. They were in fact quite enthusiastic about the debate. Concerns surrounding issues of platforming and a lack of productive discussion were quickly dismissed as the organiser spoke of wanting a debate with ‘heat and sparks’, likening their event to an intellectual “gladiator match”.

The event was presented by the University of Oslo as a “book debate”, with Lomborg introduced as a “controversial author”, an “academic reviled by green activists and climate scientists” and an “unorthodox thinker”. The promotional material used Lomborg’s image alongside explanatory text, highlighting him as the main attraction of the day. Nothing was written, or in fact presented at the event itself, to contextualise Lomborg, his history of dubious claims and opaque funding. Thus, the event completely whitewashed the context and concerns behind Lomborg. The room was at full capacity with over 80 attendees, the tension was palpable. 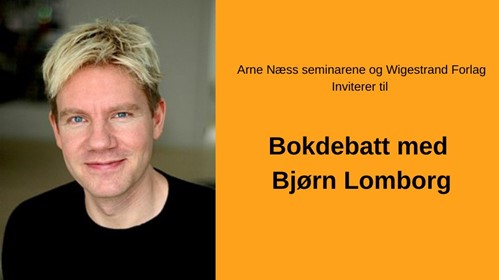 The event was part of the seminar series named after deep ecologist Arne Naess. Photo provided by authors.

Bjorn Samset began with a standard presentation of the IPCC, current climate science findings, and his book’s main themes. He was clear and direct. Speaking next, Lomborg used Samset’s presentation to argue that climate and environmental scientists around the world were deceiving us into an ideological narrative of climate alarmism. His carefully chosen words were accompanied by slides showing data and comparative analyses. There were murmurs in the audience during his speech, but throughout, the agreeing nods stood out as the majority. The crowd Lomborg was speaking to seemed mostly to be his own.

Atle Midttun’s short presentation was a missed opportunity for opposition. He showed he had completely misunderstood Lomborg’s main arguments and admitted to not having read his book. Lomborg, as a seasoned public speaker, made sure to use this as a case-in-point of his opposition misunderstanding him without even reading him. The rest of the event was hurried, overly polite, and just a handful of questions were accepted from the audience.

What Can We Learn From This?

As the climate crisis nears its breaking point, academics and their respective institutions must ask themselves: how can we create productive discussions conducive to emancipatory social and environmental transformations? Institutions such as SUM have power –and thus responsibility– to influence the knowledge and public discussions around environmental issues.

Inviting a notorious shill such as Lomborg to share a stage with a climate scientist and speak practically unopposed, elevated by a leading academic institution, accomplishes nothing but the waste of precious resources, and above all it weakens our common struggle to halt the ecological crisis.

Trym Daniel Rødvik, Philip Godal, Linnea Møller Jess & Skander Manaa are Master’s Students at the Centre for Development and the Environment (SUM) at the University of Oslo. They have come together to write this as an open letter, worried about the path SUM could take if it continues to entertain the far-right.