The following essay is adapted from the introduction of The Commoner’s Catalog for Changemaking: Tools for the Transition Ahead (2021), written David Bollier, Program Director of Reinventing the Commons, and published by The Schumacher Center for a New Economics.

Amidst the daunting challenges of our time, there is some great news: The commons is rising.  Looking beyond the market and state, the book collects vibrant examples of commoning: groups of people applying their social imaginations and collective power to build a new world of socio-economic possibilities. The emergence of commoning can be seen in relocalized food systems and community land trusts … in racial empowerment through collective action and mutual aid … and in free and open source software, peer production, and platform cooperatives. The Commoner’s Catalog for Changemaking is an indispensable guide for understanding these and many other transformations now underway, providing vital tools for the transitions ahead.

The book is available to purchase through Chelsea Green Publishing, through Bookshop.org, and via other popular online book retailers. Its pages can be browsed online at CommonersCatalog.org. 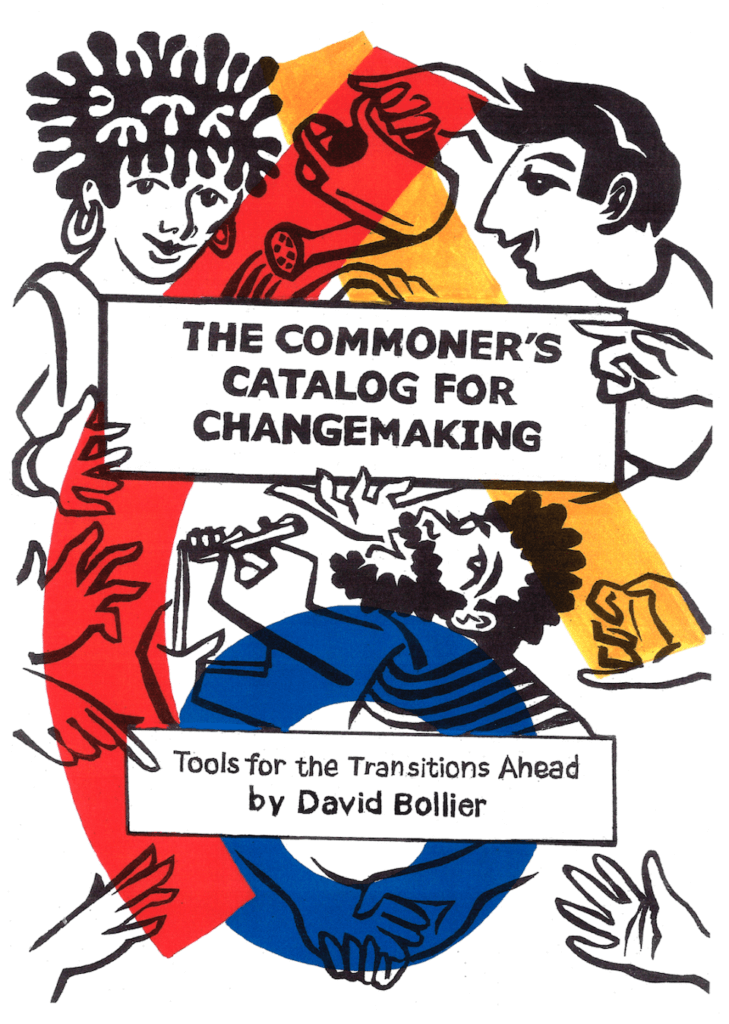 Cover, The Commoner’s Catalog for Changemaking (2021)

The Commoner’s Catalog for Changemaking was born of a simple realization: the world we have inherited is no longer working. It’s bad enough that the future of the planet and civilization as we know it is threatened. And yet there are many hopeful signs, too. Countless experimental projects and committed social movements are pioneering important pathways forward. “Another world is not only possible,” as Arundhati Roy has memorably said, “she is on her way. On a quiet day, I can hear her breathing.”

The cry heard during the pandemic and Black Lives Matter protests was “I can’t breathe.” The aspiration of this Catalog is to help us breathe more fully and deeply. It is designed to show how we can engage constructively with each other, honor the miracle of aliveness, and grow a new type of political culture, society, and economy. This Catalog provides tools for the inevitable transitions ahead.

A pre-pandemic normal is obviously impossible. We must imagine a new and better ways of being, doing, and knowing. is requires that we first acknowledge and move beyond fraying narratives about capitalist progress and benign state power—relics of the dark and brutal 20th Century. Today, pummeled by the acceleration of climate change, species extinctions, economic inequality, authoritarian repression, and racial and gender othering, among many other ills, we must face up to the structural problems of the market/state system.

“I’ve given up on fixing the economy,” cultural critic Douglas Rushko has written. “The economy is not broken. It’s simply unjust.”

In other words, the economy is working more or less as its capitalist overseers intend and as most politicians wish it to continue. If serious change within conventional politics seems futile, it is not just because capitalism has captured and corrupted our democratic processes. State bureaucracies and transnational markets (even if competitive) are often incapable of addressing many problems. They are too large, powerful, and remote. Too complex and legalistic. Too eager to shift responsibility and risk. Too beholden to institutional interests. It is no wonder that the System is failing to address many urgent needs— and why social cynicism and distrust are rampant.

With so much drift and uncertainty, the big question is where public trust and legitimacy will migrate. While autocrats skillfully exploit fear, resentment, and instability to rally a reactionary base, it is unclear whether the champions of liberal democracy can restore faith in a system so closely allied to financial capital and its traditions of exploitation (colonization, militarism, slavery, nationalism, caste, etc.). Can we imagine post-capitalist paths forward?

In the pages of The Commoner’s Catalog for Changemaking, we showcase the art, culture, and politics of commoning— the practices of talking with each other, coordinating work, experimenting, and figuring out solutions to shared challenges and how to make them local, distributed, and fair. It turns out that building a better future does not necessarily require that we go through the narrow channel of conventional politics and policy, though both surely have important roles to play. Commons-based solutions can originate right now, with us, where we live. They can even emerge, sometimes, in partnership with state authorities who understand the logic and ethos of commoning.

The point is that the commons is not some vague utopian fantasy or ideology. It is a social universe of actual projects meeting the serious needs of ordinary people. Commoning is a practical, transformative cultural enterprise.

Dozens of new-economy movements and projects have already taken to heart Buckminster Fuller’s famous line, “You never change things by fighting the existing reality. To change something, build a new model that makes the existing model obsolete.” Instead of looking to (closed, concentrated, sometimes-oligopolistic) markets or to (centralized, unresponsive, sometimes-corrupt) state institutions, we counsel open-minded, good-faith collaborations with each other. We urge the building of alternative systems at appropriate scales. at is the way to build fair-minded, participatory solutions and infrastructures now.

The scope of commoning around the world is vast, encompassing such diverse phenomena as open source software and wikis, the stewardship of forests and coastal fisheries, agroecology and local food systems, artistic collectives, cosmolocal production, and collectively owned and managed housing. Commoning is a force that drives makerspaces and open access scholarly journals. It propels cooperatives and alternative currencies. Thanks to the legal infrastructure of Creative Commons licenses, we enjoy a vast universe of freely shareable creativity, culture, and information.

Whenever a community decides it wants to treat a certain resource—land, software code, urban spaces—as shared wealth, the seeds of commoning begin to germinate. Commons are generally bottom-up initiatives that prioritize meeting people’s needs over market exchange and capital accumulation. They stress the importance of stewarding the earth and its ecosystems, especially in contrast to market-based extraction. Commons show a special commitment to the local, and to participation, inclusion, and fairness. Reliance on markets, state power, formal law, and policy are kept to a minimum. George Monbiot has summed up the virtues of the commons nicely:

“A commons… gives community life a clear focus. It depends on democracy in its truest form. It destroys inequality. It provides an incentive to protect the living world. It creates, in sum, a politics of belonging.”

A socially coherent group of peers managing collective resources (depletable and replenishable) with minimal reliance on the market or state.

A living process of commoning that enables people to co-create a sense of purpose, meaning, and belonging while meeting important needs.

A neglected sector of the economy — and life! — that generates living value in ways not easily captured by markets and prices.

Skeptics may object: “Can ‘small’ projects truly deliver a significant enough impact? Can they scale?” Dutch designer Thomas Lommée has offered a thoughtful prediction: “The next big thing will be a lot of small things.” We have relied for too long on centralized, unaccountable, hierarchical institutions that disempower us. But there is an alternative: Commoners can emulate each other’s work and federate their initiatives into larger collaborative systems that constitute a different type of economy.

In fact, commons are entirely contemporary, robust and expanding. Beyond the gaze of mainstream media, a loosely connected network of distributed, collaborative projects and movements—the Commonsverse—is  flourishing that may or may not be culturally legible. This universe consists of countless individual initiatives, each committed in its own fashion to meeting needs through mutual aid and peer governance. Social cooperation not only occurs within commons, but in the spaces among commons. The result is a federated pluriverse of commoners—self-coordinated, resourceful, animated by shared intentions. Its activities and ethics represent the kernel of a different type of society. The overall impact can be world-changing, as we have already seen in open source software, local food initiatives, and the fledgling “rights of nature” movement.

Please accept the invitation made by The Commoner’s Catalog and apply your talents and imagination to the challenges of commoning. We have much to learn from each other and a new world to build!