The Supreme Court of Mexico announced two decisions last month that protect the human right to corn biodiversity — achieved over centuries by peasant communities in Mexico, becoming a main staple of the country’s diet.

On Oct.13, the Supreme Court ratified the Precautionary Measure that bans permits to sow genetically modified corn in Mexico. That measure has been in place since September 2013. Second, the court ruled that judges in a class action lawsuit can dictate any precautionary measure necessary to protect the rights of a collective. Both of those rights were challenged in amparos filed by the transnationals Bayer-Monsanto, Syngenta, Pioneer-Dupont, and Dow Agrosciences.

The 53 plaintiffs in the Class Action lawsuit include 20 corn producers,  apiculturists, seed and human rights organizations, as well as artists and scientists. Together they refer to themselves as the “Demanda Colectiva Maíz” (Collective Corn Lawsuit) against GM corn in their ongoing legal battle that began eight years ago.

Given the depth of support and the persistence of supporters, the judicial ruling is a fitting marker on a story that began almost 6,800 years ago in the Balsas River Valley of southwest Mexico, where indigenous peoples first began to domesticate teosinte grass and thus developed what we know today as corn or maíz. Scientists estimate that this process took thousands of years  and, according to Nobel prize winner Octavio Paz,  this is an achievement as colossal as the domestication of fire. Why? One of the reasons is that small farmers have produced thousands of corn varieties in milpas, this is with over 90 wild plants that feed 80 percent of Mexico’s population.

When we say corn diversity, we refer to corn varieties, obtained by women’s and men’s  practices of selection and cultivation trials of seeds. Corn varieties are adapted to live and thrive in regions of different altitude, temperature and rainfall, therefore providing food security in this time of climate change. The introduction of GM corn would destroy this irreplaceable common good, due to the contamination of native corn by GM corn.

Ten thousand-year-old Cucurbitaceae seeds in a cave in the Central Valley of Oaxaca are considered to be the earliest known evidence of domesticated plants in the continent, while corn cob fragments from the same cave are said to be the earliest documented evidence for the domestication of maize, giving rise to Mesoamerican civilizations. Photo: INAH, Instituto Nacional de Arqueología e Historia de México

Mexico is recognized as the sixth most biologically rich country in the world, and its rural peoples are true breeders who ensure the practices that range from selecting and cultivating native seeds to developing corn varieties adapted to cope with disease and thrive in diverse ecosystems.

“The yellow corn commonly found in the United States pales in comparison to the shapes, sizes, and colors of the traditional maize varieties cultivated by the indigenous peoples of Mexico. The ears of corn may range from a couple of inches to a foot long, in colors that include white, red, yellow, blue, and black. Some varieties even have an assortment of colors on one ear.”—Christina Santini in “The People of the Corn,” for Cultural Survival magazine. 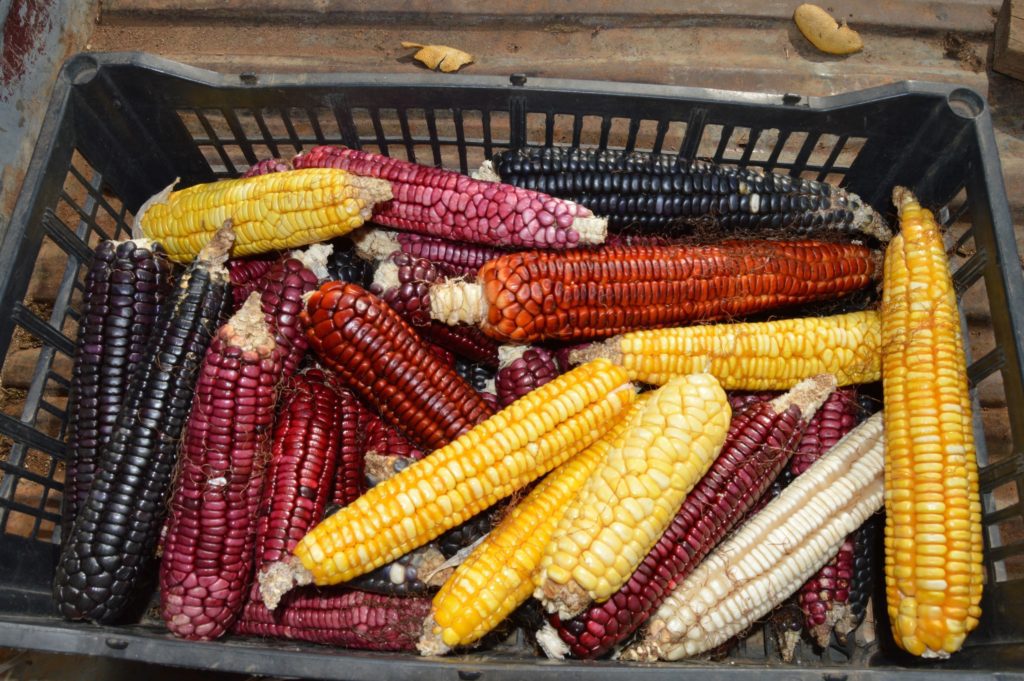 Corn has been an essential axis in Mexican cultures across hundreds of generations. Its life cycle and requirements ordered the passage of time as well as the communal spaces. It is the stem of a cosmogony with beliefs and practices that make corn a sacred plant that fostered the rise of a very rich culinary tradition. To be able to grow corn is what makes us true and enduring humans.

“Our Creation Story teaches us that the first Grandparents of our people were made from white and yellow corn. Maize is sacred to us because it connects us with our ancestors. It feeds our spirit as well as our bodies.”-Juana Batz Puac, K’iche’ Maya (Day Keeper) [Source: Creation story of the Maya people via Smithsonian National Museum of the American Indian]

The milpa is a Mesoamerican technique for planting and cultivating corn, beans, squash and chile together with many wild herbs. In the milpas, more than 90 plants are harvested for various purposes, and every three years the milpas are allowed to rest.

The concept of milpa is a sociocultural construct rather than simply a system of agriculture. It involves complex interactions and relationships between farmers, as well as distinct personal relationships with both the crops and the land. It has been noted that

“the making of milpa is the central, most sacred act, one which binds together the family, the community, the universe…[it] forms the core institution of Indian society in Mesoamerica… .” [Source: Nigh, R. (1976) Evolutionary ecology of Maya agriculture in highland Chiapas, Mexico. PhD dissertation, Stanford University. Ann Arbor: University microfilms. Via Wikipedia]

In the estimation of H. Garrison Wilkes, a maize researcher at the University of Massachusetts in Boston, the milpa “is one of the most successful human inventions ever created.” [Wikipedia]

Thus, corn remains inextricably linked to the daily lives of the campesinos and indigenous peoples of today’s Mexico. As the country’s staple grain, corn is part of almost every Mexican meal, which can include not just tortillas but stews, tamales, and atole, a hot beverage made with cornmeal.

In the words of one Native woman,

“Corn is so important because it allows us to live at peace. It is our form of food security.”

Corn is linked to survival: During tough economic times or in the face of natural disasters, families will produce more maize to feed themselves. A Tzotzil Maya elder recounts,

“During the past five centuries, while our people have withstood suffering — enormous suffering — our corn has allowed us to survive.” 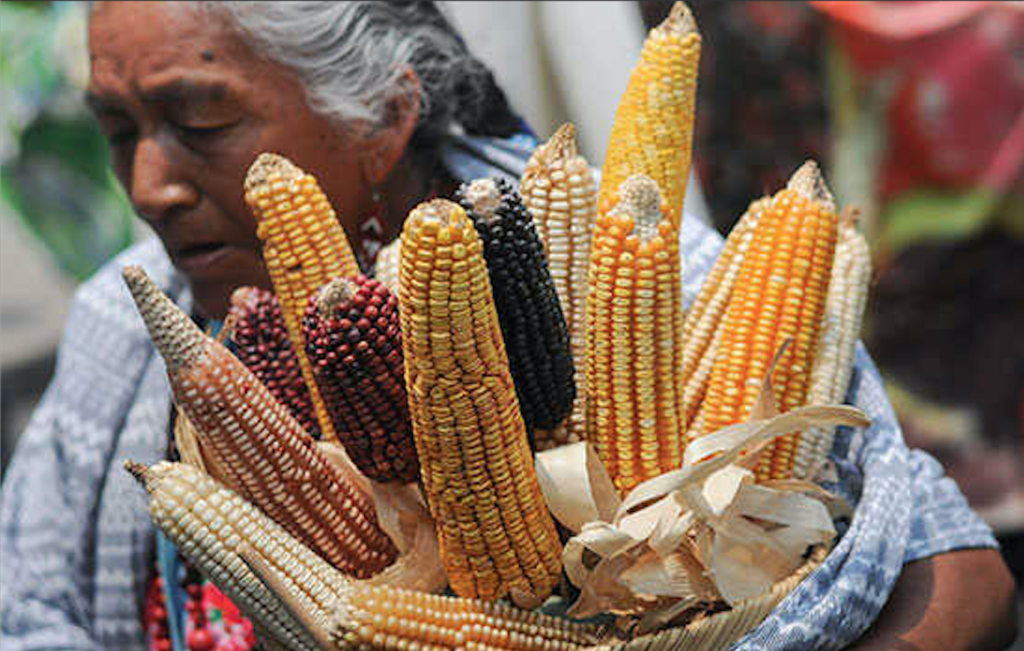 Spiritually, physically, and economically, corn sustains the Mexican people. This sentiment is captured in the oft-repeated saying: “Sin maíz, no hay país” | Without corn, there is no country. Courtesy: Demanda Colectiva Maíz.

Below, we share the press release issued by the Demanda Colectiva Maíz.

Today in a historic decision, the First Chamber of the Supreme Court of Justice of the Nation has resolved and invalidated the four amparos (injunctions) filed by the large transnational agribusiness companies against the restraining order.

Additionally, the Supreme Court determined that the judges who intervene in a class action lawsuit can dictate any measure that they consider appropriate to protect the rights and interests of a Collective, always provided that it complies with the requirements of the law.

The ministers of the First Chamber of the Supreme Court unanimously rejected the amparos filed by the transnational companies in which they raised more than 130 empty, contradictory and fallacious arguments when applied to the Corn Collective.

This decision is significant for the preservation of native corn varieties and the milpa, but also for the beekeeping sector and for the bees themselves, as part of the biodiversity which has been severely affected by the entry of such transgenics as soybeans and corn, as well as the use of such pesticides as glyphosate.

We consider that the unanimity of the decision reaffirms the validity of the arguments presented by the Corn Collective in favor of the collective rights of campesino and indigenous communities and of corn consumers. Moreover, it sets a precedent for ongoing and future class action lawsuits.

The Ministers have made this important decision, despite the fact that the agro-industry argued that decisions on biotechnology could not be in their hands or in those of any Court or Tribunal.

Although the resolution of the SCJN is to be celebrated, it should be noted that court rulings do not guarantee compliance. Without a rule of law that guarantees compliance with judicial decisions, damage cannot be avoided, as has been the case in the Yucatán Peninsula, where despite the prohibitions of the Supreme Court, soybeans and even transgenic corn are sown illegally.

The group that brought the Class Action Lawsuit in Defense of Native Corn thanks the peoples and communities that have defended and preserved native corn for generations, civil society organizations, defenders of human rights and the environment, scientific communities and academics committed to society.

The group also thanks institutions such as SEMARNAT (Secretariat for the Environment and Natural Resources), which in the recent administration has chosen to support and strengthen the arguments that the Collective has presented during the last eight years of the Lawsuit. 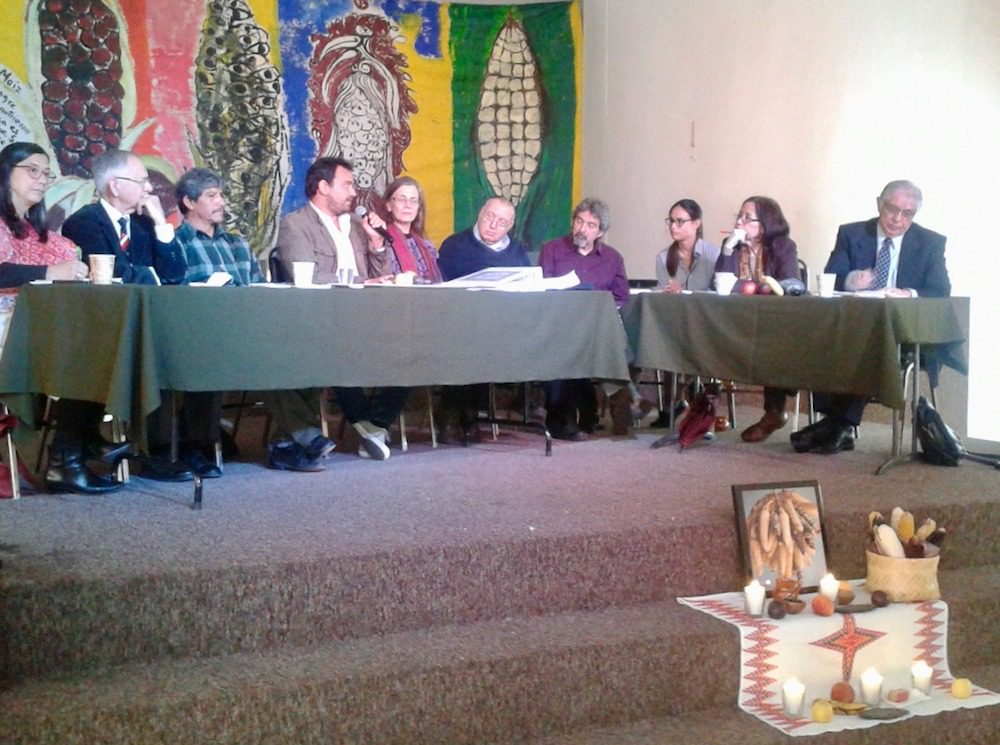 Representatives of the Demanda Colectiva Maíz present their case at the 2014 Permanent Tribunal of the People. Photo: Centro ProDH

We celebrate this decision of the SCJN and inform the public that the principal action is ongoing. We still have a long way to go to achieve a definitive ban on transgenic corn in Mexico, an action that will guarantee the preservation and protection of native corns, the milpa, the rights of campesinos to a healthy environment, and the associated human rights.

We invite you to continue learning about our defense of biodiversity and native corn on our social networks. We thank the media that have supported us in this important fight.

The Path to a Livable Future: Review Review: Diversifying Power: Why We Need Antiracist, Feminist Leadership on Climate and Energy